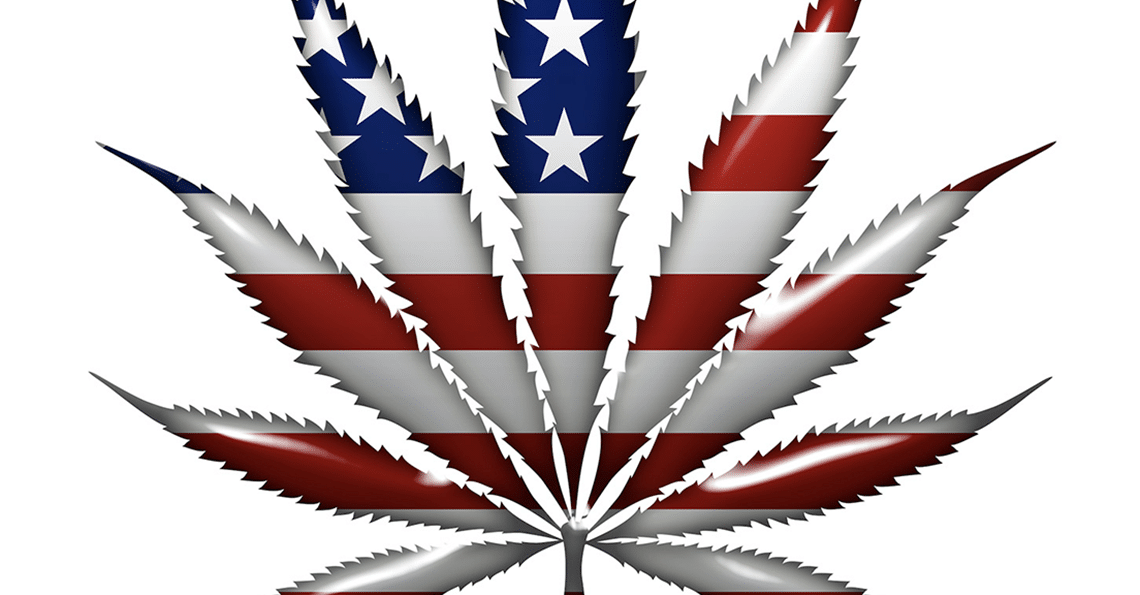 The seeds of federal marijuana legalization are being planted in the United States.

While revenue numbers continue to rise for Canada’s largest growers and sellers of cannabis, the real action will soon be led by the US market. As tax revenues pour into states with legal recreational marijuana, momentum toward federal legalization is building. If Trump doesn’t push to legalize, the next POTUS likely will.

The US is home to the largest consumer-base of marijuana on earth, giving it the biggest tax base for cannabis sales.

According to a CNBC article from December, 5 hot new careers created by marijuana legalization,

Marijuana Alignment: The Attraction for Trump is Jobs While Democrats Seek Progressive Agendas

With many stresses, including automation, on America’s economic table, middle class jobs in new sectors are needed.

Even in Canada, websites like indeed.com have hundreds of full-time cannabis jobs advertised, many relatively high-paying. On Thursday there were roughly 1,000 jobs listed in the sector.

Any political strategist reviewing cannabis-related data knows her candidate better be on the right side of this growth. To Justin Trudeau’s credit, he most certainly was, and investors and many job hunters have benefited as a result.

Unlike any president before, Trump has staked his entire legacy (and reelection potential) on jobs and the stock market. To ignore the jobs opportunity in marijuana could be a colossal political mistake.

What’s more, polls in the US suggest the majority of Americans believe marijuana should be legal. Even the former Republican Speaker of the House John Boehner is advocating for marijuana legalization, urging the federal government to get out of the way.

The aforementioned CNBC article goes on to highlight the rise and acceptance of medical and recreational marijuana use:

“Following the 2018 midterm elections, anyone over 21 will soon be allowed to legally consume marijuana in 10 states plus the District of Columbia. Overall, 33 states in the past 22 years have passed some form of marijuana legalization, from medical to recreational use.”

Conservative states Utah and Missouri both voted to legalize medical marijuana in last year’s midterm elections. The passing of the US Farm Bill also helped sentiment shift toward favouring cannabis related crops (it essentially legalized industrial hemp production across America). Red States such as Tennessee and Kentucky are near-term beneficiaries of the legalization of hemp and hemp-derived CBD. Those two states, along with a couple others, have ideal growing conditions for the crop. And a quiet majority of Red State farmers are keen to learn more about the future potential for marijuana crops.

In Texas, the mother of all Red States, “…recently reelected Gov. Greg Abbott (R) indicated during a debate that he is open to some form of marijuana decriminalization—something the state Republican Party officially endorsed this year,” according to Forbes.

It’s only a matter of time before marijuana prohibition in the US is history. The trend is unstoppable at this point; and, as everyone knows, politicians seek votes. Middle America, the bread basket if you will, is beginning to accept the benefits of medical marijuana. And they’re also interested in the idea of adding a new, lucrative crop.

Remember, a large base for Trump are farmers in America. Which is why he has been so attentive to them during this trade war with China. They have been suffering, perhaps more than any other industry, from Trump’s trade policies with China.

“Beginning April 11th, licensed marijuana dispensary owners can apply for a “special onsite use endorsement” that will allow them to set up designated smoking areas…”

Like cigar rooms all over the country, marijuana culture is taking flight. And it’s much more popular than cigars.

New Jersey may be the next state to go from legal medical marijuana to legal recreational. New Jersey Gov. Phil Murphy and Senate President Steve Sweeney and Assembly Speaker Craig Coughlin finally have a marijuana legalization package they agree on, according to NJTV News.

Murphy exclaimed what so many Governors have in the past:

Senate President Steve Sweeney has a goal of March 25th. Other states are going through the same paces as New Jersey, racing to cash in on the tax revenues and voter demands.

A NorthJersey.com article titled NJ has raised taxes and fees on alcohol, Uber, divorce. Now you could pay more for guns, highlights the desperate need for increased tax revenue.

This past week, billionaire and famed money manager Nelson Peltz, who runs Trian Fund Management LP, was awarded options to purchase nearly 20 million shares of Aurora Cannabis at $10.34 per share on Tuesday… he is now an advisor to the Canadian cannabis grower.

Peltz is CEO and founding partner of Trian Fund Management. He also serves as the non-executive chairman of The Wendy’s Company and director of The Procter & Gamble Company.

Aurora is rubbing shoulders with some serious heavy weights now.

“Nelson is a globally recognized business visionary with a strong track record of constructive engagement to generate accelerated, profitable growth and shareholder value across many industry verticals that are of great interest to us.”

Cannabis is winning support across the board as studies come out supporting the plant as an alternative treatment for several ailments.

As you may know, Trump has been on a fight against the rise of opioid usage in America since becoming president. And this may be his opening to adopt more liberal policies toward, at the very least, medicinal marijuana…

Drugabuse.com cites the American Academy of Pain Medicine, who says more than 100 million Americans suffer from chronic pain. Americans in states where marijuana is still illegal are turning to opiates like hydrocodone and oxycodone in higher numbers.

The opiate abuse epidemic is killing thousands every year in the U.S. A recent study supports the thesis that legalizing marijuana could decrease fatal opiate overdoses.

“The striking implication is that medical marijuana laws, when implemented, may represent a promising approach for stemming runaway rates of nonintentional opioid-analgesic-related deaths,” wrote opiate abuse researchers Dr. Mark S. Brown and Marie J. Hayes in a commentary published alongside the study.”

For many who would rather try marijuana than opioids, keeping it illegal sets the stage for it becoming a key voter issue…

Speaking in Iowa, this past week Beto O’Rourke opened his Presidential campaign with some very pro-marijuana talk:

“We should end the federal prohibition on marijuana.”

Beto told Vanity Fair “I’m just born to be in it.” In referencing his bid for Presidency, he joins other top Democratic candidates Kamala Harris, Cory Booker, and Bernie Sanders who have all called for federal marijuana legalization.

To be fair, Beto has supported legal marijuana for some time – long before announcing his bid for President.

Although we aren’t betting on a Beto presidency, the point is leading Democrat candidates are in favour of legalization. And they have public opinion on their side. Trump is well aware of this.

We are making a rather bold prediction right now: Trump will bring federal legalization of marijuana into the conversation during the 2020 election run. He’ll support it.

While his former Attorney General Jeff Sessions threatened a crackdown on the marijuana industry, Trump has been sheepishly supportive of marijuana (mainly from a medical perspective).

On Wednesday, March 13th, the Florida House agreed to end the ban on smoking medical marijuana. While obvious to some, the vote came by way of a landslide and was signed off by one of Trump’s greatest allies… Governor Ron DeSantis.

In 2016, 71% of Floridians voted to legalize medical marijuana on a constitutional amendment.

Why does Florida matter?

Florida is beyond pivotal for Trump to win in 2020. It is arguably the most important swing state in the country. If the American public (particularly key swing states) wants legal recreational marijuana, Trump will give it to them. He’s a dealmaker.

Gov. Ron DeSantis (a mediocre campaigner) is a Trump Republican through and through. He dealt Democrat Andrew Gillum a crushing blow in the governor race, but not for his own efforts. Trump visited and campaigned twice for DeSantis in Florida during the final week leading up to the 2018 midterms (he was slipping in the polls), and was largely credited for the victory.

A poll from March 13th, shows the Republican Gov. Ron DeSantis with the highest voter approval of any Florida governor in 10 years.

According to the Orlando Sentinel,

“Florida voters approve 59 to 17 percent of the job DeSantis is doing, according to the Quinnipiac University poll, and even Democrats back him by 42 to 28 percent.”

President Trump understands most Republicans are about less regulation and more self-governance. If medical data continues to support cannabis as an alternative to opioids in certain treatments, one would assume Trump will look at marijuana to help in the fight against opioid abuse.

If Trump understands one thing, it’s momentum. He’s talked about it and has written about it his entire career.

Marijuana has momentum, and it is just a matter of time before recreational cannabis is legal in the majority of states. Trump would be wise to give the Democrats one less polarizing issue to campaign on by supporting legalization as well. We have no doubt his people are looking at data and seriously considering backing one of the many decriminalization concepts/acts floating around Congress. The leading one being the STATES Act, which has bipartisan support and would essentially allow states to determine how cannabis is regulated while guaranteeing no federal government intervention.