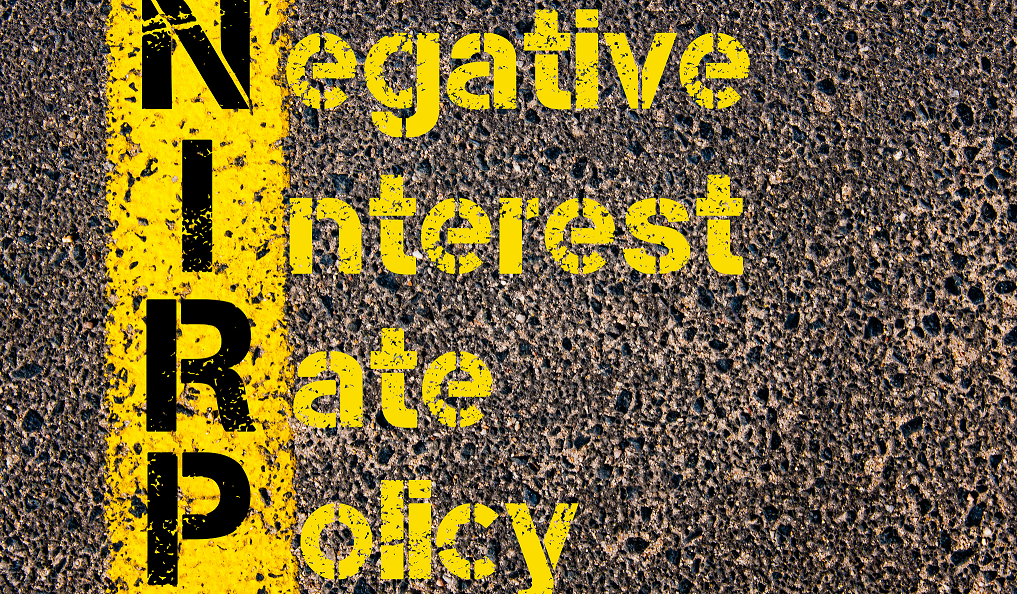 It’s very likely that Canada and the US are preparing for the possibility of negative interest rates this year… Despite predictions by firms such as Goldman Sachs that the Fed will raise rates 4 times in 2016, the stock and currency markets say otherwise.

The US Dollar had its biggest one day decline in 7 years Wednesday as traders questioned its staying power amidst declining economic numbers. Indices such as the Dow and NASDAQ remain volatile as U.S. stocks lost $1.7 trillion in the first 10 days of January – the worst start to a year ever recorded. According to MarketWatch, by January 14th, global markets had shed $3.2 trillion.

Before calculating the odds of the Fed reversing monetary policy course, it is important to look at how central banks plan to deal with the looming global recession.

Canada’s central bank (BOC) published a white paper in December titled Framework for Conducting Monetary Policy at Low Interest Rates. The bank highlighted the success of negative interest rates in other countries around the world and explained under what circumstances such measures may be introduced in Canada. The BOC wrote that:

“At this time, the Bank’s best estimate is that the ELB for the target for the overnight rate is approximately -0.5 per cent.”

We believe The Bank of Canada is fully prepared to take rates negative should inflation or the economy continue to contract. After the ECB, and more recently Japan, took rates negative, Keynesians began looking to the Federal Reserve to possibly reverse course and lower interest rates as well. For the ECB, the United States, Japan and Canada, the key metric influencing rate decisions has been stubbornly low inflation for years.

Below is a snapshot of recent inflation rates across Europe, Asia and North America:

The above core inflation rate numbers can be deceiving. Depending on the country, food and energy prices may not be incorporated because they are deemed to be too volatile. Consumer inflation has, in many cases, been even lower than the numbers above.

In the United States, the Consumer Price Index (CPI) came in at 0 or negative in half the months of 2015. The latest print for December came in at just 0.7%. While Canada’s inflation rate hit a low of 0.8% in April of 2015, it was up to 1.6% in December. This, combined with the decline of the loonie, were key reasons the BOC held back on slashing rates in December. We are expecting the inflation rate, and eventually interest rates, to fall in Canada.

On February 2nd, news broke that the Fed asked a group of America’s largest banks to stress test for the possibility of negative rates. Although just a ‘test,’ the language put forth elicited concern for the US economy. Bloomberg reported,

“But in the stress test, banks would have to handle three-month bill rates entering negative territory in the second quarter of 2016, and then falling to negative 0.5 percent and holding there through the first quarter of 2019.”

The central bank made sure to remind everyone that this did not represent a forecast and to not ‘draw conclusions’ from the stress test scenario. Clearly, there exists a significant chance that if the U.S. economy continues to falter, negative rates will be enacted.

Bloomberg highlighted the changing sentiment from the futures market of the possibility the Fed would hike rates in March in a recent chart:

At the start of January the futures market indicated there was more than a 50% chance of a rate hike… in these volatile times, it’s a new world every thirty days.

The gold standard for monitoring global trade is the Baltic Dry Index. See chart below:

Manufacturing numbers, and sinking commodity prices, tell the story as to why the Baltic Dry Index has been suffering. From the U.S. to China and, of course, Canada, manufacturing has been contracting globally.

The index was up to 49.3 (still a contraction) in January after hitting a multi-year low of 47.5 in December.

“January also marked the sixth negative month in a row, the longest stretch since the RBC index began in late 2010.”

What’s so concerning about this is that the manufacturing sector is contracting despite Canadian goods becoming significantly cheaper for much of the world thanks to the tanking loonie.

Canada finds itself in a uniquely dangerous position among its G7 counterparts as Canadians have piled on more household debt than any other nation in the G7. 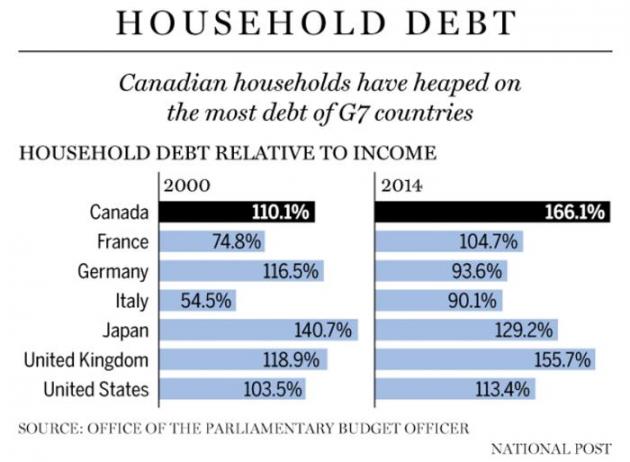 The chart above documents household debt up until 2014. Regrettably for Canada, things have only gotten worse since. On January 19th, it was reported that household debt reached approximately 171% of disposable income… Canada’s national debt is set to run up also as PM Trudeau prepares to roll out one of the largest deficit spending programs in the country’s history. (see our report Trudeau Bets $1 Billion on this Sector)

China Manufacturing in Contraction or Collapse?

US Manufacturing PMI came in at 52.4 in January; however, a downward trend has been established. How long the US can stay in ‘expansion mode’ given Canada, China, and Europe’s downtrend is yet to be seen, but one can’t imagine much longer.

The US retail and energy sectors are feeling the burn as well after “US employers in January reported 75,114 planned job cuts, up 42% year-on-year.”
source: http://www.businessinsider.com/challenger-gray-job-cut-report-january-20…

As economic activity deteriorates in North America, the inflation rate is likely to fall, further increasing the odds of interest rate cuts, not hikes.

On Page 4 of the Bank of Canada’s Framework for Conducting Monetary Policy at Low Interest Ratesreport, the subtitle reads: ‘Principles Guiding Potential Bank of Canada Actions’. Below is an excerpt:

“The following principles would guide the Bank’s thinking in terms of which actions to undertake:

The inflation rate is the top metric. Central bankers fear deflation more than anything else. In a debt-based, fractional reserve banking system, deflation equals bankruptcies and a collapse of financial markets.

One chart we routinely reference is the ever important money velocity.

The velocity of money is simply,

“the ratio of nominal gross domestic product (GDP) to the money supply (V=PQ/M), which can be used to gauge the economy’s strength or people’s willingness to spend money.”

The Federal Reserve Bank of St. Louis has provided some interesting analysis in regards to money velocity:

“During the first and second quarters of 2014, the velocity of the monetary base2 was at 4.4, its slowest pace on record. This means that every dollar in the monetary base was spent only 4.4 times in the economy during the past year, down from 17.2 just prior to the recession. This implies that the unprecedented monetary base increase driven by the Fed’s large money injections through its large-scale asset purchase programs has failed to cause at least a one-for-one proportional increase in nominal GDP. Thus, it is precisely the sharp decline in velocity that has offset the sharp increase in money supply, leading to the almost no change in nominal GDP (either P or Q).”

The short answer is that consumers, banks, and the private sector are hoarding what money they have due to uncertainty in the future. A weak global economic outlook is the main reason for this behaviour. Look for inflation targets to miss in the coming months and rates to turn negative as the US and Canada prepare to battle a reemerging recession.