This past week, Donald Trump did something to the Fed no candidate has ever done before…

He called them out as a politically motivated machine, insinuating they want Hillary to win. Speaking at the Economic Club of New York on Thursday, Trump stated:

“I think you’re going to have low interest rates until the end of the year, maybe no increase at all. And the market will stay artificially high and I think we’ll have to see what happens after that.”

In somewhat of a sequel to one of our most read Weekly Volumes of 2016 – Why Gold Will Surge with President Trump – now is the time to look at what impact a potential Trump Presidency may have on gold, the U.S. dollar, and more specifically the Fed. Like him or not, if you are still in denial or in the naysayer camp, wake up. Trump has a better shot at winning this election than Clinton… and his policies will greatly impact all of our portfolios.

America will decide its next President in 50 Days…

With only 50 days remaining until the election, numerous national polls, including Rasmussen Reports, have Trump leading Clinton. While his leads are almost exclusively within the margin of error, Trump has now widened the gap in key swing states, including Ohio and Florida, according to some polls. He has seen national polls increase in his favor 10 to 18 points in the last 45 days… momentum is a powerful thing, and if he’s not stalled during the first debate, it could be all over for Clinton. She is losing the crowd, so to speak, with 41 percent of Americans now believing she is in poor health, according to The Morning Consult poll this week.

From an investor’s perspective, there is no need to prepare for a Clinton Presidency as it would essentially maintain the status quo left behind by Obama. However, a Trump Presidency will see a number of policy shifts and create an investing landscape far different from the one we operate in today. From the potential threat of trade wars (which we believe is mostly rhetoric), to a rush to safe haven assets, including gold (which occurred following Brexit), this fall could be an interesting time for the markets. Today’s bear markets could boom under Trump, and vice versa. Just last month Trump announced he would spend between $800 billion to $1 trillion rebuilding infrastructure in America. That dwarfs Clinton’s proposed $250 billion infrastructure plan. Copper and oil anyone?

There is no need to worry about the markets declining significantly until days leading up to the election. The fix is in, and the Democrats (which includes Janet Yellen) will be sure to keep rates low and the positive headlines front and centre until November 8th. The idea of a rate hike next week at the Fed’s FOMC meeting is laughable… the Fed would never risk such a move less than two months prior to the general election when their candidate is struggling and the economy is structurally weak.

As the war of words heat up between Trump and Fed officials, if he wins, the first market shock will be the knowledge that a house cleaning is coming at the Federal Reserve, which includes a new Chairman.

Trump to Replace Yellen at Fed With His Pick

Trump has been sending mixed signals (standard operating procedure for him) when it comes to the Fed and how he might tackle the low interest rate conundrum. Additionally, he suggested he would promote a ‘Republican‘ to the role of Fed Chairman. Yellen’s term expires in January 2018, but the market would start pricing in her removal almost immediately after Trump takes office…

While the self-proclaimed ‘King of Debt’ is a big fan of low interest rates, which obviously benefit his real estate empire, he has lambasted Yellen and Obama for keeping rates low to artificially prop up the economy and stock market.

In a statement to the Wall Street Journal in September, Mr. Trump said,

“They’re keeping the rates down so that everything else doesn’t go down. We have a very false economy.”

“At some point the rates are going to have to change. The only thing that is strong is the artificial stock market.”

Trump is not the only one to identify this obvious problem. Peter Schiff, and many other market analysts and economists, have written extensively about the rock and hard place the Fed finds itself in. You see, keeping interest rates low year after year prove the U.S. economy is weak, growth is slow and inflation is muted. These factors don’t mesh with the Fed and Hillary Clinton’s message to voters. Trump is using this fact to exploit the weakness in the economy, and direct the full blame of this weakness to the current administration…

On that point, it’s hard to argue with him. If the economy was as great as Obama and many of the headlines pronounce, why has the Fed only raised rates once since 2007?

On September 12th, Trump told CNBC that Janet Yellen should be “ashamed” of what’s she’s doing to the country in regards to punishing savers by keeping rates low. Trump was singing a much different tune on May 9th, when he spoke to the The Wall Street Journal:

Trump isn’t the only powerful influencer who has been critical of the Fed, or the U.S. economy of late. Billionaire investor Paul Singer of Elliott Management faulted the Federal Reserve and others for creating unusual dangers that are unique in the “5,000 years-ish” history of finance due to low and negative interest rates, according to CNBC. He also exclaimed that “monetary policy had not led to sustainable growth.”

Does Trump have the fortitude to insert a hawkish Fed Chair who would raise rates and essentially crash the U.S. economy? Probably not. Is he more likely than Hillary Clinton to actually attempt to change, instead of perpetuate, Keynesian policies which have basically bankrupted the U.S. and turned its residential mortgage market into a state-run enterprise? Yes.

If the debt-crisis implodes on Trump’s watch, you can bet his strategies may differ hugely from any modern President’s. Furthermore, would a Republican Fed Chair actually make a difference and act independently of the new administration, should Trump win?

In a 2013 article, Julio Suarez, a senior economist of BBVA Research based in Columbia, looked at all past board members who served on the Federal Reserve’s Federal Open Markets Committee (FOMC), including both regional bank representatives and appointed members. Using data compiled from every non-unanimous vote from 1937 to October 2013, he created a statistical technique to estimate their “monetary ideology”. The results are fascinating: 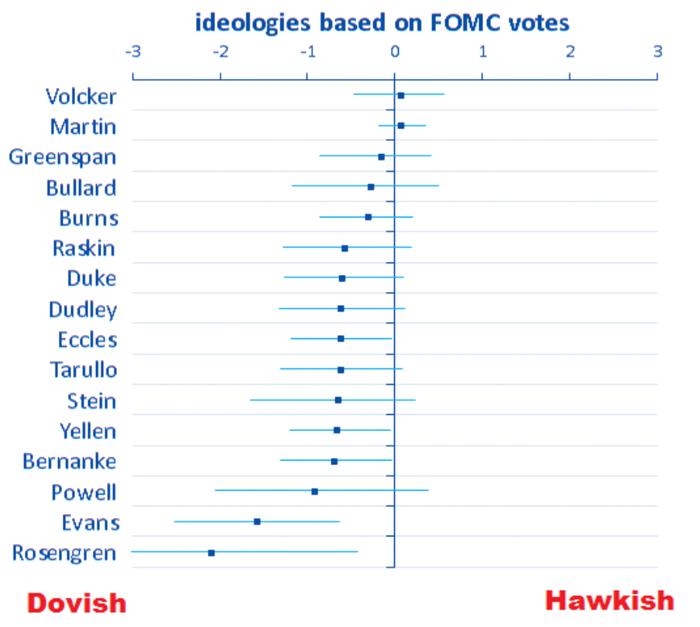 Obviously, Bernanke and Yellen lead the ‘dovish’ camp; but, what’s probably more surprising is former Fed Chair Greenspan being the third most hawkish, despite his record of low rates for longer.

There have only been two actual ‘hawks’ in Federal Reserve history. Trump would have to break the mold with whomever he appoints… and Volcker isn’t coming out of retirement anytime soon.

Fed Chair Volcker, who famously took interest rates to 20% in 1981, is regarded as a living financial legend after defeating stagflation (alongside Reaganomics) in the 1980s.

Volcker was famously quoted as saying:

“Gold was the enemy to me because that was a speculative vehicle while I was trying to hold the system together. [The speculators] were on the other side.”

So, while gold may initially surge following a Trump victory, akin to what we saw with Brexit, once he gets his pick for Fed Chair in 2018, all bets are off.

Volcker warned in 2013 that easy monetary policy has created distortions and could lead to a bubble. Bernanke had taken the Fed’s balance sheet through $3 trillion at that point, compared to about $4.5 trillion today.

Volcker explained that the U.S. government makes up about 35% of GDP and that the financing of the residential mortgage market accounts for about half the total system.

One thing both Democrats and Republicans should be able to agree on is that what the Fed has done since the 2008 Financial Crisis has not worked. If it had, interest rates would have normalized (or at least risen more than a symbolic 25 basis points), GDP would not be averaging less than 1% in the past 3 quarters, the Fed’s balance sheet would have unwound significantly, and the mounting trade and national deficits would have slowed or reversed.

Trump might be the only politician with the stomach to simply try something new from a fiscal and monetary policy perspective.

Brexit – A Bellwether of Political Outcomes

The people of Britain are a perfect example of going against virtually every mainstream economist and central banker, and seeing positive results.

What’s happening in the U.K. (not Brexit itself, but the early result of it), could inspire the U.S. and many other countries around the world…

Trump was an outspoken supporter of Brexit. He was virtually the only significant Western leader who supported it publicly. And that is paying dividends. Against all predictions, the U.K. economy and currency has been performing well in recent weeks. After cries and warning’s that the sterling would fall to $1.20USD, it has stabilized well above $1.30USD and Britain’s economy seems to be doing quite well. This is a stark contrast to what the likes of Obama, David Cameron, and even the Bank of England’s own Chairman Mark Carney warned about if Britain left the EU…

In fact, Britain’s central bank was lit up in a recent piece titled, Terence Corcoran: Leave it to suave Mark Carney to explain away how he got the Brexit fallout so wrong.

U.K. economic forecasters at Credit Suisse and Morgan Stanley recently cancelled recession forecasts; especially relevant is that instead of the previously forecasted 1% growth, like most of the West, Britain is now forecasted to grow at near 2% for 2016, according to the article. Many Trump supporters, like the ‘leave camp’ in Britain, are opposed to big government and excessive regulation.

The Markit/CIPS purchasing managers’ index (PMI), which represents the manufacturing sector in Britain, rose to 53.3 in August from July’s figure of 48.3. A figure above 50 indicates expansion.

While this is due, in large part, to the pound’s approximate 10% decline in value since Brexit, few economists, if any, predicted such an immediate and robust recovery. In fact, Markit reported that the “month-on-month increase in the PMI level was the joint largest in the survey’s 25-year history.”

If Britain’s economy continues to strengthen, under the desired impact of a lower pound sterling, it could lend an unconventional option for Trump on this side of the pond. If a Trump Presidency comes to fruition, look for gold and other safe haven assets to spike as millions of Democrats hit the panic button and rush out of anything that has been artificially propped up for the past 8 years…

We are not saying the manipulation will stop and that Trump has the answers. Far from it… but any disruption to the delicate financial/mortgage system, which have been on life support (low interest rates and free money) for nearly a decade, could prove painful to the markets in the short-term.

At some point, whether it’s 2017 or the year after that, the last decade of Fed policy is going to be blamed for anemic growth in the U.S. economy. Something drastic is required for the United States to truly rebound economically. It could require a paramount shift in monetary and fiscal policy…

And a restructuring of U.S. debt is well within the King of Debt’s skill set.