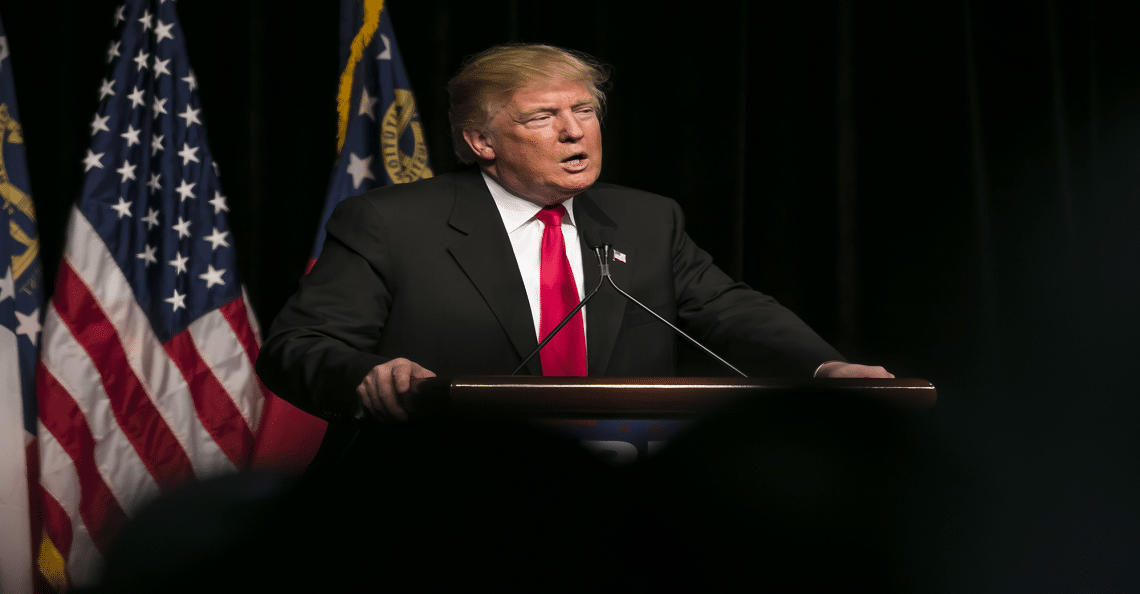 From accusations of Russian collusion to the recent Ukraine whistleblower drama and more, President Trump has managed to keep his re-election bid intact.

But while the “Teflon Don” may seem bulletproof, there is one thing thing that could leave him vulnerable as he prepares for re-election in 13 months…

Only one President since the Civil War (William McKinley) has won re-election with a recession occurring in the final two calendar years of his first term. While Trump is familiar with defying the odds, his voter base in the Rust Belt and swing states could abandon him if the economy falters.

Unfortunately for Trump, the U.S. economy is showing signs of weakness as the end of his third year in office approaches. Both the manufacturing and service sectors are nearing contraction levels after three years of robust growth.

At the heart of this weakness is an escalating trade war with China, America’s largest trading partner and the second largest economy in the world. Before Trump took office, we outlined how he may take America down the same road Herbert Hoover once did with the Smoot-Hawley tariffs. Sadly, aspects of our premonition are beginning to come true…

The Institute of Supply Management’s manufacturing index (ISM) contracted in September 2019, dropping to 47.8—its lowest level since June 2009. While the U.S. is very much a service sector-based economy, a strong manufacturing sector is key to the long-term health of any economy. Bear in mind, Trump campaigned on rebuilding America’s manufacturing sector. The U.S. can only avoid recession for so long if the ISM continues to contract.

“We have now tariffed our way into a manufacturing recession in the U.S. and globally.”

Indeed, the potential for a manufacturing recession appears to be spreading across the globe. The European PMI dipped to 45.7 this September—its lowest level since October 2012. What’s more, September marked the eighth successive month of Europe’s PMI sitting below 50, according to Markets Insider.

Job Momentum Slows In The U.S.

Though the United States’ latest employment numbers came close to meeting analyst expectations, and the unemployment rate is at a stellar 3.5%, new job creation appears to be topping out.

Slowing job creation and a contracting manufacturing sector are not to be taken lightly; when the labour market slows, the service sector is usually next as households limit spending. After a ten year bull market, we are starting to see real cracks in the foundation of America’s economy.

In an amazing display of frugality, and a clear sign of underlying strength in the U.S. economy over the past 10 years, American households have reduced debt loads by trillions.

From a pure household debt to GDP perspective, the U.S. consumer appears strong (particularly when compared to the average Canadian consumer, whose household debt to GDP sits just above 101%). However, if the U.S.-China trade feud intensifies, it may be too much for the economy (and the U.S. consumer) to handle. We were worried about this possibility before Trump even took office…

We’ve been ahead of the Trump trade from the beginning; not only did we declare that he had a better chance to win the election than Hillary, but that his trade policies would have a dramatic effect on the U.S. economy.

In our May 15th 2016 article titled Why Gold Will Surge with President Trump, we warned,

“…we are about to witness drastic change in how the U.S. deals with its trading partners.”

“Trump’s rhetoric is akin to Herbert Hoover’s actions taken just prior to the Great Depression. After taking over the Republican party from arguably one of the greatest Presidents in American economic history, Calvin Coolidge (he believed in Adam Smith’s invisible hand approach to economics), Hoover ran a campaign promising farmers that he would reignite their failing enterprises by increasing tariffs on agricultural products. Hoover won the election in a landslide with Republicans taking the House and Senate.

Ignoring a petition from over 1,000 economists warning of the dangers of such a tariff plan, and formal complaint letters from 23 of the United States’ trading partners, Hoover followed through on his campaign promise by enacting the Smoot-Hawley Tariff Act. This was the second highest tariff ever in American history and created a trade war. Within approximately one year, U.S. exports had dropped by nearly half. Within two years, the Great Depression started. Interestingly, both Trump and Hoover were very wealthy businessmen prior to getting into politics.”

Fed to the Rescue?

Although history may appear to be repeating itself, there’s one thing that could keep the U.S. economy from melting down: the all-powerful U.S. Federal Reserve—the same Fed Trump has ridiculed for months now. Don’t bite the hand that feeds, Donald…

The Federal Reserve has kept the U.S. economy off the ropes and expanding for a decade. Despite a more dovish Fed and frequent calls from the President to slash interest rates, the U.S. dollar remains strong (the U.S. Dollar index is above 99 as of this writing – near its 1-year high).

In late September, it was reported that the Trump administration was exploring a means of curbing U.S. investments in China.

Days after this news broke, CNBC stated that the discussions had grown to include the possibility of “. . . delisting Chinese companies from American stock exchanges and preventing U.S. government pension funds from investing in the Chinese market.”

“To me, last week’s developments seemed like the most recent logical steps in this classic dangerous journey that is analogous with that which occurred in the 1935-45 period.”

We warned before Trump took office that his protectionist policies could spiral out of control. What’s more, we specifically cited the same time period (the Great Depression) that Dalio and others are now referencing—only we did so more than 3 years ago. While the U.S. economy is far superior to its 1930s former self, it is also much more globally integrated… meaning that every escalation in the trade war has the potential to draw the U.S. economy (and the world) closer to recession.

Finally, investors should remember that, if needed, the Fed will be on Trump’s side as it rushes to shore up confidence and slash rates to stave off recession. If it cannot prevent a recession, President Trump will be a one-termer.