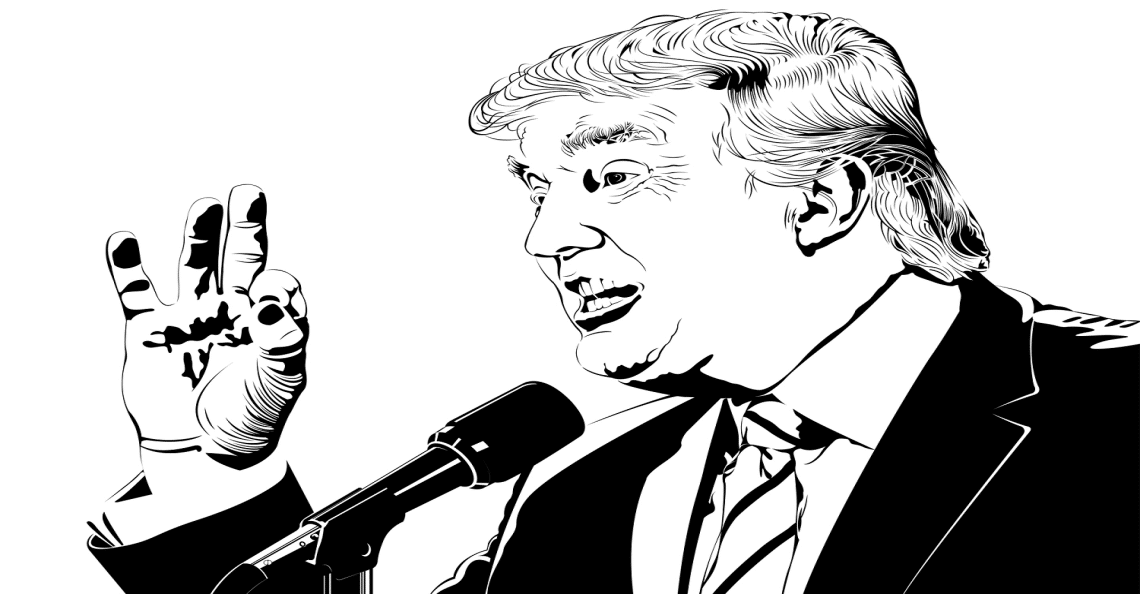 While the U.S. economy continues to expand at a decent clip (2.3% annualized growth in Q1) it has come at a cost. The US Treasury posted an absurd net borrowing total of $488 billion from January through March. The amount represents a new quarterly record, nearly half a trillion dollars of debt in three months!

What’s so startling about the current debt binge is that the U.S. is not in recession, or fighting a war (at least not officially). Trump has certainly improved economic sentiment, with key metrics turning very positive; however, we would be remiss to ignore the expanding federal debt in America. If the global economy hits a speed bump, who will be there to buy the vast sums of US debt auctioned off each quarter?

Most market participants, and the mainstream financial media, have become numb to huge deficits. It’s not much of a talking point anymore – unlike how it was during the Obama years.

Only when looking at the entire system, including the ever-rising US national debt (>$21 trillion) and the Fed balance sheet (>$4 trillion), does the unsustainability of annual near trillion dollar deficits become clear. Investors must remain cautious, ever mindful of the crash of 2008. Unsustainable household debt and loose credit markets can bring things down on short notice.

As most of us remember, the Fed stepped in during the financial crisis (and in the half decade following) as the major buyer of toxic assets and US debt. Its balance sheet went from nearly nothing to $4.5 trillion. Numerous pundits and money managers proclaimed the Fed would never be able to unwind its balance sheets. Well, it has a long way to go, but the Fed is finally quickening its pace of balance sheet reduction. Perhaps this will allow it to enter the bond market when the next crisis hits?

Still, with interest rates below 2% and a Fed balance sheet above $4 trillion, we are nowhere near normalized.

While the Fed takes a back seat to buying up U.S. Treasuries every month, foreign central banks and pension funds are picking up the slack. And, for America’s sake, they are going to need to pick up a lot of it as JPMorgan Chase & Co. estimates there will be some $1.3 trillion in debt issued in 2018 – the most since 2010. (Note: that estimate was made at the beginning of the year, before Q1 came in at almost half a trillion.)

The last time the Treasury was issuing bonds at this rate, gold soon traded to an all-time high above $1,900 an ounce in 2011.

Steven Mnuchin | Not Worried About Deficits or the King of Debt

Treasury bonds are issued to finance government spending. The more spending, the more bonds need to be issued.

Steven Mnuchin, U.S. Treasury Secretary, responded to the record issuance of $488 billion in treasury bonds in a recent Bloomberg interview. He was asked rather bluntly what would happen if demand for treasury bonds ever declined?

He initially scoffed at the question, noting the U.S. Treasury market was the largest and most liquid in the world. The Bloomberg correspondent pushed back,

“You have maybe reduced demand and a big increase in supply, and that’s quite basic, and that’s actually independent of the Fed policy.”

“By definition supply and demand will equate.”

“I’m not concerned about that. There are still a lot of buyers of U.S. Treasuries.”

The Treasury Secretary’s remarks define the word complacency. Shrugging off the questions, as if demand for U.S. debt is insatiable, stokes concern. His confidence reminds us of someone we have all come to know quite well… President Donald Trump.

In May of 2016, we quoted the Donald in a recent interview he had when asked about the U.S. defaulting.

“This is the United States government. First of all, you never have to default because you print the money. I hate to tell you okay, so there is never a default.”
– 2016 Republican Presidential Candidate, Donald J. Trump

Read our report from 2016 here: Why Gold Will Surge with President Trump

‘Never’ is a word we never want to hear from our leaders in charge of national debt, fiscal or monetary policies…

What will happen if there is reduced demand in U.S. Treasuries at a time supply is near all-time highs? The answer is the Fed will step in and do the buying as it did following the financial crisis of 2008 and the Great Recession. This will have two effects: First, it will begin to devalue the U.S. dollar; and, secondly, gold will trend higher as it did in the years following the Great Recession.

Notice how the U.S. Dollar index initially spiked following the Great Recession, but then quickly declined. It remained muted for years until the recovery became certain and quantitative easing came to an end. In the event of a global or U.S. slowdown, (which we do not see on the immediate horizon) demand for Treasuries would dry up as foreign bondholders, desperate for cash, worked to stimulate their economies. At that point, as was the case in 2009 and beyond, the Fed would be forced to step in. The impact on gold prices is below:

Peter Schiff, who we interviewed in his Connecticut home back in June of 2015, weighed in on the recent borrowing binge. Schiff commented last week,

“If the Treasury is borrowing this much when the economy is supposedly booming, imagine how much more it will borrow during the next bust.”

We are not in the tin foil hat, impending economic collapse, hyperinflation camp, nor are we in the disillusioned pro-Trump camp. The fact is, it has been roughly ten years since a recession, and guys like Schiff are going to be right one of these days… historic stats suggest we are overdue.

On May 1st, the current U.S. expansion became the second longest, according to data dating back over 164 years and 34 business cycles.

Trump’s economy is growing, and unemployment is at multi-decade lows. With more rate hikes forecasted in the U.S. (Canada has already stopped hiking rates amidst slowing economic growth and debt fears) gold has remained range bound (US$1,300 -$1,360 per ounce) for quite some time.

According to The Balance, the U.S. federal budget deficit for fiscal year 2019 is projected to come in around $985 billion. The Congressional Budget Office is predicting deficits will top $1 trillion by 2020.

Is anyone concerned? Not really.

According to The Balance, government income or revenue from taxes is,

Amazing as that increase is, mandatory spending by way of Social Security and Medicare are what will sink the ship. Combined, these two entitlement programs have exceeded $2 trillion a year since FY 2011. According to The Balance,

“These payments consume two-thirds of the revenue each year. Only an Act of Congress that amends a program’s benefits can change them.”

According to The Fiscal Times, roughly 10,000 boomers celebrate their 65th birthday every day. Beginning in 2011 and “by the time the last of this generation approaches retirement age in 2029, 18 percent of the U.S. will be at least that age, the Pew Research Center projects.”

Despite the increases in tax revenue, deficits are rising. Obama holds the presidential record of overseeing a $1.4 trillion deficit in 2009 – due to hundreds of billions in economic stimulus packages and reduced tax receipts courtesy of the recession. What is Trump’s excuse for racking up >$1 trillion deficits? The answer is maintaining defense spending while servicing hundreds of thousands of new retirees set to collect Medicare and Social Security.

Total U.S. debt is already above $21 trillion. That’s well above the all-important 100% debt to GDP ratio.

Running these kinds of deficits is a new thing. The great monetary experiment known as ‘quantitative easing’ or printing money to monetize debt while suppressing real interest rates has yet to conclude. It has been ignored since roughly 2014, but is about to become front and centre in financial circles.

Notice the deficits spiking after 1971, when President Nixon took the U.S. off the gold standard. From this point on, U.S. dollars have not been convertible into gold. This has given politicians carte blanche to make never-ending promises in exchange for voter support.

We predicted Trump would beat Clinton months before the election. And we warned he was the self-proclaimed ‘King of Debt‘. His administration is preparing to borrow money like no one before, and that includes Obama, if you can believe it.

While Trump’s Tax Cuts and Jobs Act are fueling profits for corporations, the U.S. failed to exceed 3% GDP in Q1 of 2018. Borrowing is outpacing GDP growth. Deficits do not lie. While some sit back and hope everything will work out and the U.S. economy will never go into recession, we are becoming cautious. The savings rate in the United States continues to fall as consumers throw caution to the wind.

Trump has the people believing in the economy and America, but unless GDP explodes to 3.5% and stays there, deficits will remain.

Betting in Nevada casinos point to the exuberance sweeping the United States. According to WTOP.com, casinos in the silver state crossed “the $1 billion revenue mark for the third consecutive month in March, a streak that the state had not seen since 2008.”

The longest billion-dollar streak lasted eight months, from October 2006 to May 2007. We all know what happened in the months after May of 2007…

We are not gold bulls at Pinnacle, but believe in constant rebalancing of portfolios and diversification. Gold equities recovered in 2016, but have been relatively quiet for the past 18 months. A headline from Bloomberg a few days ago caught our attention. It read:

This Billionaire Has Put Half His Net Worth Into Gold

That billionaire is Egyptian Naguib Sawiris. He said in an interview Monday that he believes gold prices will rally further, reaching $1,800 per ounce from just above $1,300 now, while “overvalued” stock markets would crash.

Sawiris stated from his office in Cairo overlooking the Nile,

“In the end you have China and they will not stop consuming. And people also tend to go to gold during crises and we are full of crises right now.”

So, while we are not predicting a market crisis anytime soon, one will arise eventually. When that happens the Fed will expand its balance sheet once again, devalue the U.S. dollar and send gold prices higher. At that point, we believe investors will diversify by buying gold and gold equities as they did between 2009 and 2011.

Pierre Lassonde, chairman of Franco-Nevada, suggested this past week that gold equities have never been cheaper. His point rests on the declining value between equities and their relationship to bullion. He spoke to BNN Bloomberg about challenges facing the gold mining industry, from deal flow to financings.

As the old saying goes, the best time to plant a tree is yesterday, but the next best time is today. The King of Debt and never-ending deficit spending will cause a crisis at some point. It’s not speculation, it’s based on simple math. Until then, it may be wise to diversify some capital to the undervalued gold sector. We expect the GDX and GDXJ to have strong moves into the fall and winter seasons.