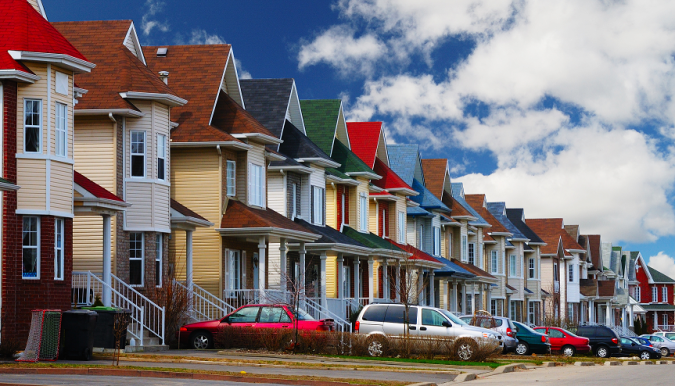 The new catch phrase spreading across global media outlets has been the supposed imminent ‘normalization‘ of interest rates. Strategically coined to make the Saturday morning reader assume ‘normalization’ means a return to ‘normal’ – intended to be reassuring – it is a terribly misleading phrase…

We are living in a new debt management paradigm that will not see a return to interest rates anywhere near ‘normal’ (3% for short-term and 5-6% for long-term debt) in many of our lifetimes.

The Fed’s next FOMC meeting is set for September 16-17th, so we won’t have to wait long to see if 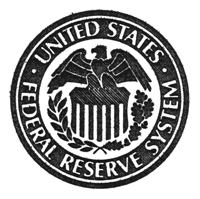 We all know the QE/low rates narrative from 2009-2014: ‘the monetary base expansion will create inflation’, thus eroding our debts. Obviously, that hasn’t happened – at least not yet. You see, the Fed is playing the long game. Financial Repression can take decades to run its course…

Relative to the size of the economy, the last time the US had debt anywhere near today’s levels was in 1945. At that time, the US had debt equivalent to approximately 110% of GDP; and after over 20 years of Financial Repression, the country was able to shrink its debt to roughly 30% of GDP by the 1970s. The same tactic, and for the most part the same result, was achieved by the majority of developed nations who were in similar fiscal positions following WWII.

Today, the US national debt has climbed to over $18.3 trillion, roughly $1 trillion more than annual US GDP.

Special note – unlike in the 40s, 50s and 60s, women will not be entering the workforce by the millions. Much of the purchasing power that was lost during these decades by men was made up for by these newly working women. An average American or Canadian family could get by fine on one salary in the 1950s; however, many now struggle to get by with two incomes.

Also, the USD lost substantial value against many currencies during this period, including the yen and the Swiss franc. Another devaluation of that scale is coming, slowly but surely. 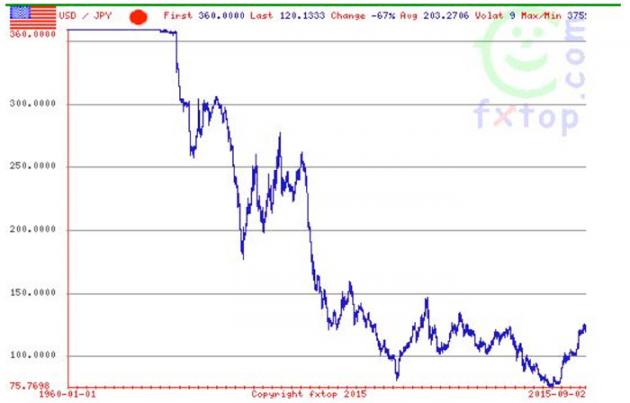 As you can see, the US dollar has lost near 70% of its value vs. the yen over the past 50 years. History is about to repeat itself as the strong dollar policy turns into the ‘inflate away debt and try to survive’ policy.

What makes this global currency war so epic (click here and here for our previous reports on the currency war) is that almost every developed nation is in a similar fight to devalue their respective currencies.

Remember it takes years, decades even, for the impact of Financial Repression to be felt. This is a gradual devaluation that can make a huge difference over time.

Financial Repression (FR) was a term first introduced in 1973 by Stanford economists Edward S. Shaw and Ronald I. McKinnon who were famously quoted as explaining FR as “policies that result in savers earning returns below the rate of inflation.”

Carmen Reinhart, known for co-authoring the book This Time is Different: Eight Centuries of Financial Folly, with Kenneth S. Rogoff, co-authored a paper titled The Liquidation of Government Debt, with M. Belen Sbrancia in 2011. Sbrancia is currently an Economist at the International Monetary Fund.

The report is essential to the understanding of monetary policy in the 21st century – post Great Recession. It may help investors, large and small, position their resources in a manner that will build wealth, not destroy it in the years ahead. Below is a short excerpt:

“For the advanced economies in our sample, real interest rates were negative roughly ½ of the time during 1945-1980. For the United States and the United Kingdom our estimates of the annual liquidation of debt via negative real interest rates amounted on average from 3 to 4 percent of GDP a year. For Australia and Italy, which recorded higher inflation rates, the liquidation effect was larger (around 5 percent per annum).”

Remember those words: liquidation of debt. It may sound benign, but comes at a high cost… the erosion of our purchasing power.

Financial repression involves boosting government capital while at the same time reducing the real value of the national debt.

The method to achieve this is straightforward. When governments and central banks keep interest rates below the level of inflation (which they have done for half a decade) it represents an ‘invisible tax’ on savers. However, it benefits borrowers immensely as the real value of money, or purchasing power, is continually eroded.

This is the Fed’s game plan. It has been the path of least resistance to this point as higher interest rates would crash the debt markets, make negative real interest rates impossible to achieve, boost the value of the US dollar and quell any hope of debt repayment. Any ‘normalization’ of interest rates to historical averages of 3% for short-term debt and 6% for long-term would send interest payments on the US national debt to roughly $1 trillion per year. That would hypothetically equate to more than 1/3 of all US government receipts (which totaled $2.79 trillion in 2014) received annually.

The US government is already paying close to 20% of its total receipts to interest on its national debt… it can’t afford to pay much more.

We live in a debt-based economy, and there is no turning back now.

“Throughout history, debt-to-GDP ratios have been reduced by:

One just has to glance at the above list to know which route our respective governments are taking. Only one is politically convenient: steady financial repression, which will likely be interrupted by periods of“surprise inflation.” This was the case in the post WWII era, finally peaking in the 1970s.

Read the other options to yourself again and imagine an environment where they would prove feasible for today’s politicians. Cross off austerity and explicit default. You are left with economic growth. However, with the baby boomers retiring and birth rates at record lows, it will be difficult to attain strong GDP growth of higher than 3%…

While QE officially ended nearly one year ago, the Fed’s balance sheet has yet to contract.

At the end of Q1 2015 the Fed was holding $2,797.5 trillion in US government debt. That makes the central bank, by far, the US government’s largest creditor.

A more accurate explanation of what has transpired is that the Fed QE program has stabilized. The private bank now buys enough securities to replace the principle payment on receipts each month.

Each time a principal payment comes due the federal government quickly issues new debt (at currently low interest rates) to pay off the maturing debt. The Fed may not be expanding its balance sheet per se, but it isn’t getting any smaller.

Don’t be mistaken, the Fed can raise interest rates by 25 basis points… and it can do so two, maybe even three times over a couple years. However, without exceptional growth of 4-6% GDP for many years, it is extremely unlikely the Fed will raise interest rates to ‘normal’ levels of 3 or 4% and hold them there for any sustained period. It does not fit the Financial Repression model.

Instead of focusing on September or December’s potential rate hike, try to look further into the future. Long-term planning, currency choices and asset allocation in a world of Financial Repression will all play vital roles in the success or failure of a 21st century portfolio.