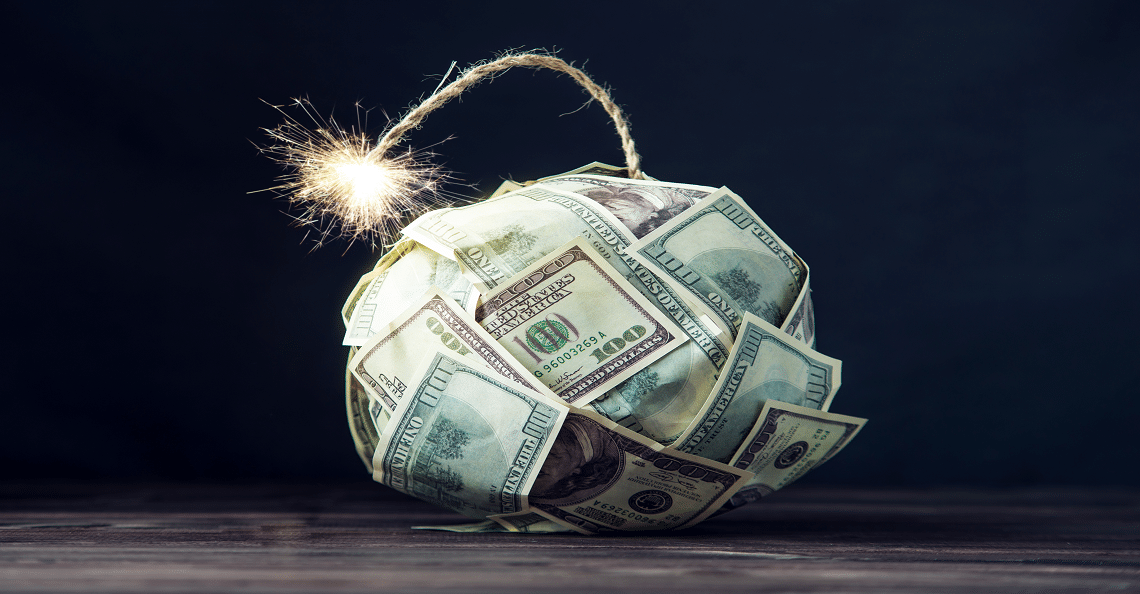 Like a drug addict looking for his next hit, the U.S. government is addicted to accumulating debt and running deficits.

Given that the U.S. is responsible for more than 30% of the world’s GDP, investors that fail to understand the intricacies of the United State’s national debt situation could be putting their entire portfolio at risk…

Of course, if Trump had it his way, we wouldn’t have to worry about the U.S. running deficits.

During his campaign, President-elect Donald Trump claimed he would eliminate the nation’s 19 trillion-dollar national deficit by the end of his second term. While we agree that a man’s reach should always exceed his grasp, the Trumpster was really reaching on this one.

Trump and the National Debt, an article updated June 3rd, 2019, extinguished any hope of that now totally forgotten and wildly inaccurate proclamation. In reality,

“…[Trump’s] budgets would add $9.1 trillion during that time. It would increase the U.S. debt to $29 trillion according to Trump’s budget estimates.”

So although it was Obama who added more debt to the nation than every President in U.S. history combined, it will be Trump who takes the national debt to about $29 trillion before the end of his second term (assuming he is re-elected – we believe he will be).

U.S. national debt has already ballooned to just over $22.3 trillion.

U.S Debt is a Bi-Partisan Problem

While the Trump administration could certainly do more to cut back the United States’ national debt, voting Trump out of the White House isn’t a panacea for the nation’s debt problems.

If and when the Democrats take office, the U.S. national debt level will likely rise even faster. While cuts to military spending could take some pressure off of the U.S.’ national debt, many of today’s front-running Democrats support “. . . some version of Medicare for All, which could cost $32 trillion or more over the next decade,” according to the WSJ. Yikes.

It would appear that no matter what, investors will be forced to navigate a world that is each year more indebted than the last. However, this doesn’t necessarily mean that the proverbial “end-times” are coming…

3 Reasons Why the U.S. National Debt Crisis Fails to Disrupt Confidence in the Dollar

Countries tend to get into trouble when their Debt to GDP ratio reaches 100%.

For some countries—especially those without world reserve currency status—reaching this 100% threshold could spell more than trouble. It could signal a point of no return.

So, why is it that the U.S is still able to attract creditors and maintain investor confidence, even with a Debt to GDP Ratio of approximately 105%?

1. Intragovernmental holdings makes up a significant portion of the U.S. Debt to GDP Ratio.

The world over, market commentators and financial pundits place a heavy emphasis on the United States’ Debt to GDP ratio. The U.S. Debt to GDP ratio sits at about 105%, a dangerous place to be according to many economists…

However, what most fail to recognize is that this ratio includes intragovernmental holdings, which makes up 27% of the United State’s national debt. Take that out and the public Debt to GDP ratio falls to about 75%.

A CaspianReport video from late 2018 perfectly sums up how creditors view the United States’ current Debt to GDP Ratio:

“Many economic advisors detract the intragovernmental debt, which lowers the public debt to GDP ratio to 75.5%.”

“It’s misleading [subtracting intragovernmental debt from the U.S. Debt to GDP], but it reassures creditors that it [the U.S.] has the economic power to repay them. If this was any other country, it would have collapsed under the weight of pressure.”

“Financing deficits is not an everlasting policy. Creditors, although confident now will not tolerate a national debt without end. As the debt to GDP ratio increases, debt holders will carry greater risks and will, therefore, demand larger interest payments.”

In sum, most creditors believe intragovernmental holdings are ensured, leading them to treat public debt more seriously. With the public Debt to GDP ratio sitting around 75.5%, the majority of creditors believe there is little cause for concern.

2. The U.S. economy is growing at a rapid clip.

In the midst of its longest expansion ever, the U.S. economy is growing almost as fast as the debt it piles on each year. Despite adding hundreds of billions in debt, the U.S. Debt to GDP ratio declined 0.40% percent between 2016 and 2017.

3. U.S. households continue to shed debt at an incredible rate since the Great Recession.

A country is only as financially sound as its citizens and their respective households. In a stunning display of frugality and responsible spending habits, U.S. households have cut debt and continue to do so. After peaking near 100% in Q1 2008, U.S. households have since reduced their debt load by trillions of dollars.

﻿Growing Out of Debt Is Hard, But Not Impossible

As mentioned earlier, creditors will not tolerate national debt forever. Somehow, some way, the U.S. will have to reduce its national debt.

It becomes clear that there are only three ways for the U.S. to reduce its national debt:

With the first two options off the table indefinitely (reducing government spending and hiking taxes is electoral suicide), GDP growth is the only answer.

To reign in its current Debt to GDP Ratio, the U.S. economy needs to grow at a minimum of 3% or more. It’s far from impossible, given that it managed to do exactly that last year. But is it sustainable? That’s a debate for another letter.

In 2019, GDP will be running at well over $20 trillion, meaning that a 4% or 5% GDP growth rate would add approximately $1 trillion in GDP annually. Coincidentally, these are the deficits the U.S. is expected to face in 2020 and beyond.

As well as the US economy is doing, it still has to outpace the spending of politicians. A herculean task, given that trillion dollar deficits are rearing their ugly head once more…﻿

Trillion Dollar Deficits Are Coming Back

Deficits peaked under Obama following the financial crisis of 2008, with 2009 marking the highest annual deficit ever at $1.41 trillion. Unfortunately, with Trump at the helm, deficit spending is on the rise again… just for different reasons.

Despite an unenviable track record of trillion dollar deficits, the size of the US economy is one reason that China struggles to keep up with the U.S. Consider the U.S.-China comparison below:

The United States’ 2018 GDP, which is not reflected above, will push U.S. GDP above $20 trillion. The larger the U.S. economy becomes, the more easily it can handle $1 trillion dollar deficits.

In our debt-based monetary system, growth is always the answer. The key is that the deficits not rise too fast while the economy continues to expand.

The final reasons that lead us to believe there is no near-term risk of economic fallout from the United States’ growing national debt levels are rooted in common sense.

As mentioned prior, the U.S. makes up approximately 30% of the world’s GDP. The global markets would simply implode if the United States’ national debt were to go unmanaged. Given that virtually every country’s economy is linked to the U.S., global powers are highly incentivized to ensure the continued stability of the U.S. economy.

Lastly, the U.S. government spends hundreds of billions on its military every year. After rising to nearly $800 billion in 2010, the Trump administration spent about $633 billion on the U.S. military in 2018—more than the next 7 leading military countries and their budgets combined.

For any country or group of countries to challenge the United States’ dollar hegemony would be ludicrous… at least for the time being.