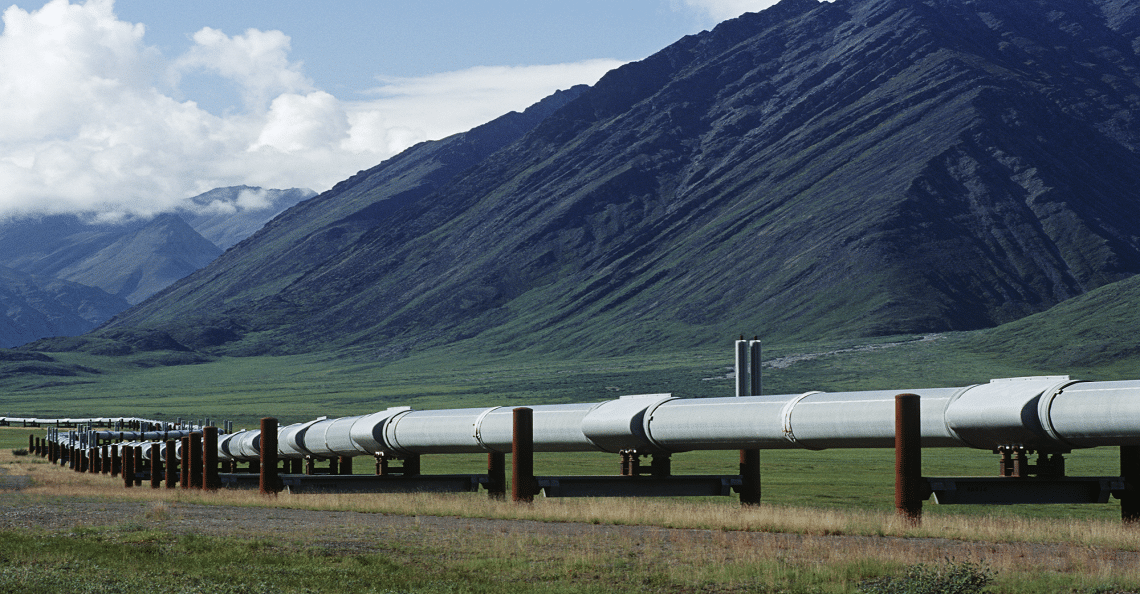 WTI topped US$73 per barrel, reaching a four-year high this past week. And very few investors in Canada are even talking about it…

Global growth and increasing U.S. pressure to curb Iranian crude exports are moving oil prices higher. As Trump urges OPEC to flood the market with supply, ahead of mid-term elections in November, Canada’s energy sector remains an afterthought. The country’s investors are enthralled in the marijuana space, lacking interest in what still remains a huge part of Canada’s economic engine.

A nation with the world’s third largest oil reserves (after Venezuela and Saudi Arabia) should be rejoicing at WTI’s current price. Instead, Canadian heavy oil (known as Western Canadian Select) is trading near a record US$40 discount to the WTI oil benchmark. Many Canadian producers of oil are completely missing out on this rally, and no one seems to care.

While the cannabis sector is buoying Canadian M&A activity, for now, one has to wonder how long we can rely on this industry. With Canada’s energy export game in limbo, and no new pipelines set for approval, a back-log of Albertan oil is creating a supply glut and forcing Canadian firms to accept outrageous discounts…

This is Canada’s problem alone, given almost all of its oil heads to the United States – the world’s largest producer. Furthermore, under President Trump, the U.S. is set to become the largest exporter on earth any month now. Look at the remarkable increase in U.S. crude exports over the past few years: 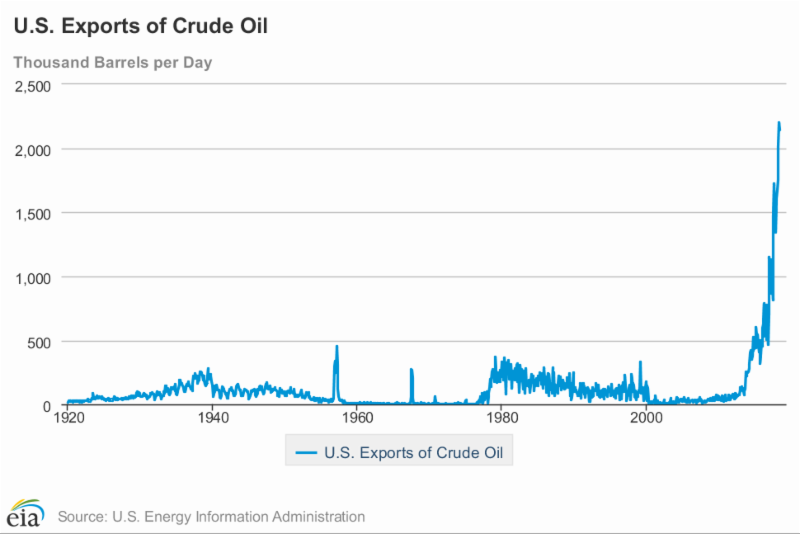 The Dramatic Increase in U.S. Exports of Crude Oil (Thousand Barrels per Day)

The U.S. emerging as the global player in oil and natural gas has forced Canada out of a power position when selling product to its neighbour, and made it desperate to diversify like never before. Right now, Canada’s energy sector must fight for its fair share of the global energy market or risk economic devastation for the next ten to twenty years.

2017 saw foreign direct investment fall to its lowest level since 2010 in Canada. With trade wars heating up around the world, oil and natural gas should be a built-in advantage for Canada’s economy. But, many international oil companies have left Canada (or downsized their portfolio within the country), at a time some would argue we need the investment more than ever.

“Direct investment dropped 26 percent in 2017 to $33.8 billion, Statistics Canada reported Thursday in Ottawa. Capital flows dropped for a second year, and are down by more than half since 2015.”

2015 was a significant year for Canada. Power transferred from the Conservatives to the Liberals at the end of the year…

Currently, Justin Trudeau’s Liberals are enjoying solid enough poll numbers, despite lacklustre foreign direct investment and a languishing energy sector. But, its not all bad. After a weak 1.4% for Canadian GDP in Q1, Q2 came in at an annualized rate of 2.9% – a one year high. And the unemployment rate sits at 6%, just bumping up recently from a near 40-year low.

So, where are Canadian businesses putting their capital in a quest for yield?

“Canadian companies are looking outside the country for deals. Outbound transactions from Canada into the US increased by 8% in the first six months of 2018 compared to the same period last year. There have also been 161 International non-US outbound deals with countries like Australia and the UK as Canadian dealmakers aim to diversify their portfolios due to trade uncertainty and tariff conflicts.”

This is surprising in some ways and not in others. While on one hand, the U.S. has become more competitive following historical tax reform, the Canadian Dollar has plummeted in recent years.

Amidst increasingly hostile trade rhetoric, failed negotiations and a very weak Canadian dollar, it appears domestic players are increasingly focusing on domestic deals. This is a welcomed shift.

“In addition, a high number of purely domestic deals has been powering the recent surge in Canadian M&A. there were 440 transactions involving buyers and targets that were both Canadian in Q2 2018. This is in line with 434 homegrown deals in Q1 2018, and represents a 33% increase compared with Q2 2017.”

The marijuana or cannabis sector bolstered M&A activity in the first half of 2018. The timing of marijuana’s rise could not have been better, as it has eased the pain from Canada’s beleaguered oil sands.

Concerning the cannabis sector, according to PwC, “A total of 48 deals took place in the first six months of 2018 for a total disclosed value of CA$5.2 billion.”

Focus on These Three Areas as Marijuana Recreational Legalization Nears

“Following the legalization of cannabis on October 17, the deals landscape will focus on three main activities:

This is not news to us. In a July weekly letter titled, Warning For Marijuana Investors, we wrote,

“The majority of Canadian-based marijuana companies, especially the major multi-billion dollar names, will need massive international exposure to grow from (or perhaps even justify) their current market caps.”

“Just like in Colorado, once sufficient supply comes online, we believe prices will correct and the market will be in a supply glut. Furthermore, the Canadian market is simply too small for the current number of players…”

Canada’s Quest to Diversify… Not There Yet

Canada’s cannabis sector put up CA$5.2 billion in M&A activity in the first half of the year. While impressive, its sustained contribution to GDP is yet to be seen. In Q2 2018, mining accounted for just CA$2.3 billion in M&A activity. Real estate came in at CA$8.1 billion, and tech at CA$10.4 billion. Despite the devastating discount Canadian domestic crude is forced to sell at, the energy sector contributed the highest total deal value, CA$15.8 billion worth, in Q2 2018.

So, Canada’s energy sector is by far (and still) the most important sector when it comes to M&A activity. It is also a huge contributor to GDP, coming in behind only real estate and manufacturing.

With the vast majority of Canadian oil exported to the U.S. to be refined and priced, it’s little wonder we are being taken advantage of. The Trans Mountain Pipeline is still shrouded in doubt, resulting in Canadian oil-by-rail shipments reaching an all-time high of 204,000 bpd in June, according to the Financial Post.

“We could very easily push about 400,000 barrels per day (moving on railway cars) by the end of next year.”

Meanwhile, some of Canada’s largest producers are not waiting for Trudeau to get a deal done on Trans Mountain. According to a September 26th Financial Post article,

While statistically proven to be more dangerous than pipelines, Canadian producers have no choice but to utilize rail as supply continues to build.

But it’s not all lacklustre news this week…

Canada’s energy sector may have one final shot at growing without U.S. influence.

LNG Upside | Too Many Years in the Making

Ironically, with trade tensions peaking between Canada and the U.S., more may get done for Canada’s energy export industry under Trudeau’s watch than any Prime Minister in decades…

It is anticipated by early next week, we will know if Royal Dutch Shell Plc and its partners are moving ahead with an estimated C$40 billion liquefied natural gas terminal in Kitimat, British Columbia.

Financial Post reported that according to people with “direct knowledge of the activities,” preparations for an October 5th announcement are underway. The festivities, followed by an LNG Canada event, will include fireworks at the local golf club in Kitimat, British Columbia, the city of the proposed project.

More good news hit the wire on Friday, when two of Royal Dutch Shell Plc’s Asian partners approved their share of the investment, according to Bloomberg.

It now looks likely the project will be approved.

Further impetus to decide on approval ASAP rests in various tax breaks set to expire. According to WorldOil.com,

“British Columbia has set a Nov. 30 deadline for a final decision if the project is to claim as much as C$6 billion in tax breaks and savings.”

Billions of dollars have left Canada in recent years as project after project is delayed or canceled. If this potentially historic Kitimat project moves ahead, it could reverse the negative sentiment surrounding business investment in Canada.

While Shell’s LNG Canada Project and the Trans Mountain Pipeline (now owned by the Federal Government) are by no means guaranteed – going 0-2 seems unlikely. Canada is the 5th largest producer of natural gas globally and has massive reserves in B.C. and Alberta. With the Liberals running massive deficits and upsetting many in energy-producing provinces such as Alberta and B.C., this could be a boon for the party and its re-election bid. The first and only LNG plant on Canada’s west coast may finally be opened to markets in Asia, long sought after by previous governments.

The timing, if the project is given the go ahead soon, could not be better. Trump and China continue to clash over trade, with the Chinese threatening to put tariffs on U.S. LNG…

Finally, if Trudeau can get the Trans Mountain Pipeline approved (again) and built, it would triple oil exports to the West Coast. For a country embattled in a trade dispute it cannot win, expanding trade with Asia is no longer an option. It is a necessity. Canada’s energy sector may be in store for a long-awaited boost. With Shell’s final decision forthcoming, next week could be a pivotal one for our nation’s future…