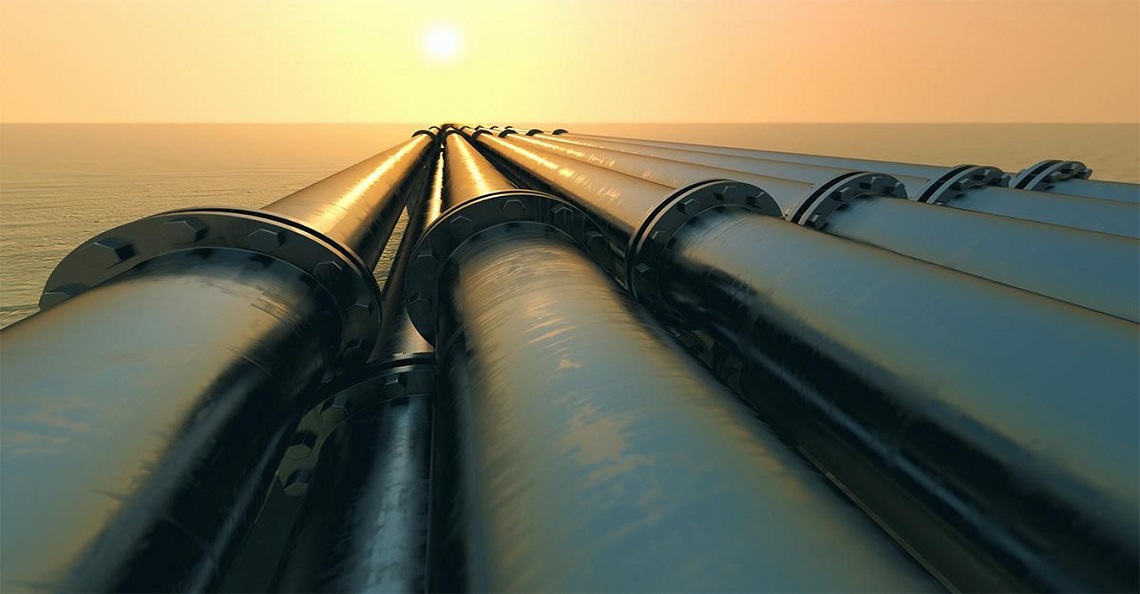 With roughly $35 trillion of natural resources in the ground, Canada is the land of economic opportunity. Few countries, if any, can compete, sort of…

In the last 10-15 years, Canada has squandered opportunities to establish itself as a global natural gas player.

We’ve provided a front-row seat at Pinnacle, regularly writing for more than a decade about self-defeating policies and infighting as billions in potential tax revenues slipped away — right into the hands of America.

For this Intelligence Newsletter, we’ll forgo recounting the many pulled bids and fortunes lost by some of the world’s top oil and gas companies due to write-downs of planned LNG infrastructure and oil projects over the years. Instead, we’ll focus on the opportunity the United States is capitalizing on today, and what our potentially last shot (Shell’s majority owned LNG Canada terminal) could mean for Canada and the world.

The world is in an energy crisis, and it will get worse…

It’s important to remember that one of the main drivers behind robust economic growth is affordable energy — something the world is currently devoid of.

The positive news: Canada can help the world fight back against out-of-control energy prices. It’s one of only a handful of countries that can take a leading role in this battle to get global economic growth moving again.

Canada Must Get LNG Canada Up and Running ASAP

Scheduled to be complete in 2025, Canada may be on the cusp of tapping into the insatiable global demand for natural gas.

However, the country faces two significant challenges before getting to the finish line: achieving social license for a pipeline that would make LNG Canada a reality. And securing long-term supply contracts over the U.S., which is ploughing ahead on several new LNG projects that could crush Canada’s chances (supply deals are long-term in nature — once you get them, they’re hard to lose).

Russia, Iran, and Qatar have far more natural gas than every other country combined.

Here is a snapshot:

A quick glance at the above countries makes it easy to see why the United States is putting up month-over-month record exports of natural gas. And, unlike in years past, where the vast majority of U.S. gas went to Mexico and even Canada, the U.S. is now shipping almost half to the E.U. in a bid to lessen European reliance on Putin.

Even those with a short memory can recall Trump predicting this exact outcome if things ever turned hostile with Russia.

President Trump was famously laughed at in 2018 when he warned at the U.N. General Assembly that, “Germany will become totally dependent on Russian energy if it does not immediately change course.”

As Germany fires up coal plants to meet its energy needs while paying Russia billions for natural gas, the country is finally (and seemingly frantically) investing billions in floating liquefied natural gas (LNG) terminals around the country. In the meantime, the United States is stepping up to help — while making tens of billions of dollars.

The chart above shows the U.S. rising from almost nothing in 2015 to the world’s largest exporter of LNG in 2022. Just over nine years ago, in May of 2013, we wrote The Four Nat Gas Horsemen, which was devastatingly prescient. In that nearly decade-old Intelligence Newsletter, we stated,

“Natural gas is a commodity North Americans need to pay close attention to as we are fortunate to be at the forefront of an export revolution.”

We highlighted Canada’s opportunity, but also that of the United States, explaining,

“Canada, awash with natural gas, finds itself in a unique position to capitalize. However, Canada is not alone as Australia, the United States and Russia all hope to meet much of this rising demand from Asia.

All 4 countries are making moves to get a piece of the nat gas action as it’s an energy market too big to miss out on. The first to market (meaning which nation builds the necessary infrastructure) will reap the biggest rewards. Russia is already ahead on this front, but the U.S., surprisingly, is close behind.

To say that the U.S. has experienced an energy revolution over the past 5 years is an understatement. Check out this chart: 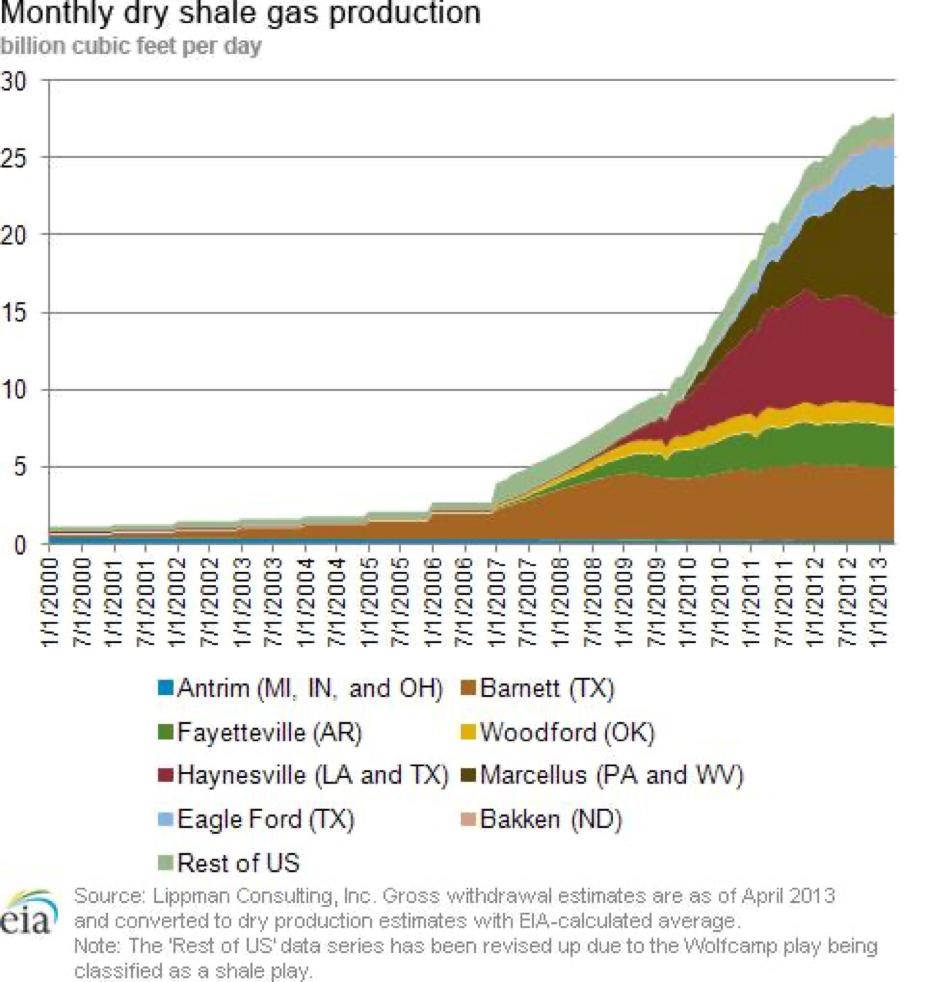 Natural gas production in the U.S. is bursting at the seams and the only realistic option is to begin exporting it for profit.”

To read The Four Nat Gas Horseman in its entirety, click here.

We published a deep dive into Australia’s success and Canada’s failure in Destroying Canadian Energy from Within back in October of 2016. Worth a read.

The Fraser Institute sums up how Canada has fared against the United States in meeting this generational economic opportunity. In Canada’s lost LNG opportunities due to dearth of export facilities, authors Elmira Aliakbari and Jairo Yunis explain,

There is a reason the U.S. is referred to as the land of opportunity. Historically, its people seize economic opportunities. They’re industrious and driven. Although driven, Canada can’t seem to get past its mountains of red tape for large capex natural resource projects.

While the U.S. enjoys record exports of natural gas, Canada’s only export market is the United States (ironically, its top ally and most significant competitor in this industry).

Instead of the expected $2.3 billion surplus for April, Canada registered a $1.5 billion surplus – almost solely due to record oil exports. A single, large LNG facility on Canadian soil could equate to billions in additional surplus annually. Instead, we watch as the U.S. comes to Europe’s rescue while enjoying a revenue windfall.

The U.S. continues to churn out record trade deficits, but imagine where it would be without the oil and gas it exports.

Canada: Where We Stand Today

While Canada’s natural gas reserves are not as robust as our oil reserves (3rd largest globally), they are still massive relative to our domestic demand.

“As of 2019 Canada is estimated to have 1,382 trillion cubic feet of natural gas resources, an amount equal to over 200 years of current annual demand.”

Yet, we have no LNG export facilities.

Here is the fascinating thing about Canada, which separates the country from most nations:

It just needs the infrastructure to export.

According to worldpopulationreview.com, Canada produced 165.2 billion cubic metres of natural gas in 2020 – making it the 6th largest producer globally.

At 112.6 billion cubic metres, Canada consumes the 5th most amount of natural gas globally. The difference between our production and consumption (produce nearly 55 billion cubic metres more than we consume) highlights why we should be an export powerhouse.

So, where do we stand when exporting natural gas abroad (not including our pipelines to the United States)?

Pretty much irrelevant at the moment.

In a May 2022 Globe and Mail story by Brent Jang, the current state of Canada’s push to export natural gas is clarified. He writes,

“There is also LNG Canada’s Phase I, on track for completion in 2025, when it would become the country’s first export terminal for the fuel.”

LNG Canada – Where it Stands Today

In the same article, but a different section, John Lehmann provides an update on LNG Canada, writing,

“At the head of the Douglas Channel, construction of LNG Canada’s Phase 1 terminal began in 2018 on a Kitimat industrial site on the Haisla Nation’s traditional territory.”

And things are moving along…

“A 10-storey module arrived at LNG Canada from China two months ago, the first in a series of massive units that will be installed over the next 18 months.”

“LNG Canada’s seven years of construction for Phase 1 will cost $18-billion, and the co-owners of the joint venture, are pondering whether to approve Phase 2, which would double the export capacity to 28 million tonnes a year.”

Turning back to Jang, he is decidedly cautious, writing,

“Despite pipeline challenges and other obstacles, the federal government dreams that Canadian-based export terminals will help boost global supplies of LNG by the end of this decade. Yet Ottawa is also still striving to meet Canada’s net zero carbon emissions goals by 2050.”

“We are wanting to help our allies with energy security, but we are also committed to fighting climate change.”

How Much is 28 Million Tonnes of LNG?

How much is 28 million tonnes?

For context, in June, the United States exported 7.29 million tons of LNG – its second biggest month ever. That equates to about 87 million tonnes a year.

LNG Canada, if Phase 2 is approved and brought to market, would help Canada export about 32% of what the U.S. does.

So, can Canada make this happen and usher in a new era of global Canadian energy?

“While LNG Canada is by far the most advanced of any export plans in the country, serious infrastructure concerns remain.

The Coastal GasLink pipeline is… costly and contentious. The pipeline’s current budget is $6.6 billion, though industry experts estimate cost overruns of $1-billion. In February, T.C. Energy reached option agreements to sell a 10 per cent stake in Coastal GasLink to two groups of elected First Nations along the route.”

“But a vocal group of Wet’suwet’en First Nation hereditary chiefs and their supporters say that the pipeline project still does not have the consent of those hereditary leaders.”

However, construction has already begun.

Clark Williams-Derry, a Seattle-based analyst weighed in on the debate, noting,

“Compared with the U.S. front-runners, LNG Canada’s Phase 2 still has a long way to go before becoming reality…”

“By the time that LNG Canada’s Phase 1 begins exporting in 2025, it will be nine years after the first U.S. LNG facility started operating.”

Don’t we know it…

Timing is Everything as Prices Explode in Europe

While Canada has struggled to build anything related, what’s been happening to natural gas prices in Asia and Europe – the largest markets for the U.S. and Australia?

According to QZ.com, that is equivalent to oil prices touching $600 per barrel. Prices have settled back to about €190. E.U. natural gas futures traded around €85 per megawatt-hour in mid-May – more than 200% higher than the €20 or so megawatt-hour price from May of 2021.

While the U.S. horse passes Australia and Qatar to become the leading exporter of natural gas in 2022, it is hard not to wonder what could have been…

The U.S. ultimately won the race that began back in 2013. Its rider, wearing stars and bars, is on the podium. Champagne is spraying. And the cheers from the crowd only add to the euphoria from the billions in added tax revenue for the victor nation. Meanwhile, Canada is in the crowd, just another onlooker. We can see all the excitement. It is all around us. And we have the tools to be on that podium, but our stallion has yet to leave the stable.