After years of consolidation, natural gas has been the best performing commodity over the past 12 months. Its demand fundamentals are becoming increasingly bullish as new markets for the clean burning energy are opening up.

Natural gas is a commodity North Americans need to pay close attention to as we are fortunate to be at the forefront of an export revolution. The gas industry is witnessing radical demand increases from overseas and all signs point to the continuation of this trend.

North America’s massive natural gas inventories are set to be unleashed on the global market, which has been searching for a reliable, cheaper (for now) energy alternative for decades.

The Canadian Environmental Assessment Agency estimates global LNG (Liquefied Natural Gas) demand will rise 50% from 2009 levels to 280 million tonnes per year by 2015; and that the growth will be concentrated primarily in Japan, Korea, China and India.

North America is positioned to supply this demand increase as we are awash in the commodity. The question is, will we streamline the infrastructure to get the product overseas?

Foreign nations will pay a large premium to current North American nat gas prices and this realization is beginning to show in NYMEX futures as initiatives have been implemented to get the product off of our shores. 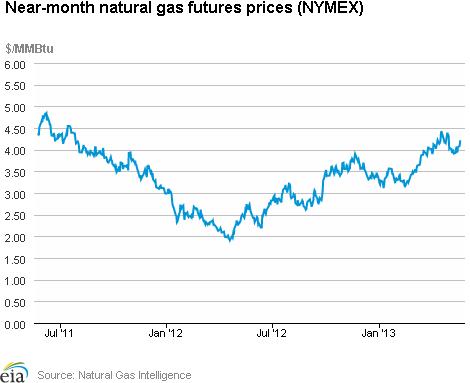 Natural gas futures closed the week at $4.23 per million British thermal units on the New York Mercantile Exchange, completing the third consecutive weekly rise. Prices are up 27% this year alone and almost 100% year over year.

To give you an idea of just how underutilized natural gas is in many developing nations, and the demand potential associated, consider this:

Canada consumed over 100 billion cubic feet of natural gas in 2011. This is a simple supply and demand story. You’ve got 2/3 of the world’s population, or more than 4 billion people, consuming a little more than double what Canada’s 35 million people consume. However, the catch-up period for nat gas usage has begun. China, India and other emerging markets are inking deals to import record amounts of natural gas.

Russia is the latest victor in the export race. In March, China National Petroleum Corp. (CNPC), the country’s largest producer of gas, signed a memorandum of understanding with Russian energy giant Gazprom. The two energy powerhouses agreed that from 2018 to 2048 Gazprom would send 38 billion cubic meters of natural gas annually through a pipeline into China. This came after over 9 years of arguing and disputes on pricing. Price agreements have not been announced, but China remains at Russia’s mercy when it comes to logistics and realistic pipeline partners.

Canada, awash with natural gas, finds itself in a unique position to capitalize. However, Canada is not alone as Australia, the United States and Russia all hope to meet much of this rising demand from Asia.

All 4 countries are making moves to get a piece of the nat gas action as it’s an energy market too big to miss out on. The first to market (meaning which nation builds the necessary infrastructure) will reap the biggest rewards. Russia is already ahead on this front, but the US, surprisingly, is close behind.

To say that the US has experienced an energy revolution over the past 5 years is an understatement. Check out this chart. 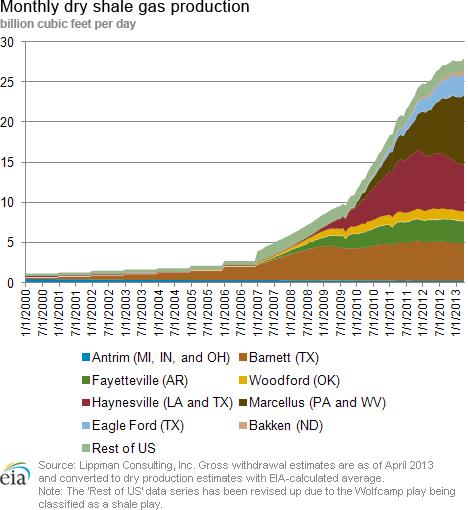 Natural gas production in the US is bursting at the seams and the only realistic option is to begin exporting it for profit.

Earlier this week, on May 20th 2013, the Obama Administration approved a $10 billion dollar facility in Texas for broad liquefied natural gas exports. This came after many months of debate over whether the ongoing shale gas boom, which has effectively made America energy independent, should be exported overseas.

After years of monthly trade deficits, averaging nearly $50 billion, it appears Obama has dreams to reverse the trend.

The approval of this export facility in Texas is being hailed as a milestone in the U.S. Investors are viewing the move as a sign the Department of Energy believes the benefits from exporting nat gas outweigh any negative impact it may have on the US economy – namely that domestic prices could rise as gas leaves American shores.

A rising nat gas price, which consumers use to heat their homes, is not in the best interest of the American consumer, who has not only been enjoying years of cheap natural gas, but is still attempting to recover from the worst financial crisis since the Great Depression. Needless to say, higher prices would come as welcome news to natural gas producers and investors who have been positioning and preparing for this moment for many years.

The UK is a perfect example of a country which has become dependent on natural gas imports. Currently the UK relies almost solely on Qatar for its natural gas.

“Many U.S. allies are keen for exports to go ahead, notably the U.K.

With dwindling North Sea gas reserves, the U.K. has become increasingly dependent on LNG imports from one place-Qatar. The 300th cargo of LNG from the wealthy Gulf emirate arrived on Saturday. The flip side of this trade is a Qatari spending spree on iconic British assets, such as the Park Lane Hotel and new skyscraper The Shard.

Qatari dominance of U.K. LNG trade could diminish if a utility like Centrica is able to import U.S. LNG as it hopes.”

Few think of Australia as a major natural gas exporter; however, it has big plans to become one.

Australia believes it can become the second largest LNG exporter in the world behind Qatar by 2016. It has six projects currently committed or under construction, representing 60 billion cubic metres of new capacity.

While this sounds impressive, 60 billion is a drop in the bucket when comparing the potential demand from China, India and even South America.

Canada hopes it can use its favorably located west coast to tap into the Pacific Rim and even as far as India, exporting natural gas to billions of people overseas.

The U.K.’s BG Group Plc, which describes itself as a world leader in natural gas, is sinking its teeth into Canada’s natural gas industry. The BG Group has disclosed plans to export the equivalent of 25% of Canada’s current daily natural gas production from a British Columbia terminal beginning in 2021.

“BG’s $16-billion proposal to export up to 3.3 billion cubic feet of gas per day from a new terminal on B.C.’s Ridley Island, at Prince Rupert, brings to 10 the number of projects in varying stages of development. Five of them plan to export a combined 9.6 billion cubic feet of gas per day beginning in the second-quarter of 2015, according to numbers compiled by AltaCorp. Capital Inc.”

This increase is equivalent to roughly 68% of Canada’s daily gas production in 2012.

BG Group announced on May 6th 2013, that it has signed binding agreements with China National Offshore Oil Corporation (CNOOC) for the sale of certain additional interests in the Queensland Curtis LNG (QCLNG) project in Australia for $1.93 billion and for the supply of an additional 5 million tonnes per annum of liquefied natural gas (LNG).

China is staying very active in global energy markets and is proving it cannot secure enough energy to support its growing nation. As North America opens its natural gas reserves to the world, it will gain access to markets never before tapped into. With that said, the race to lockup offtake agreements with emerging markets has begun. Being first will matter as the US, Canada, Russia and Australia are all trying to sell the same commodity to the same group of buyers.

It appears the dog days for clean burning energy, natural gas are over, at least for the foreseeable future.

If you’re not already a member of PinnacleDigest.com and would like to receive reports like this one, once per week via email, please click here to join for free.