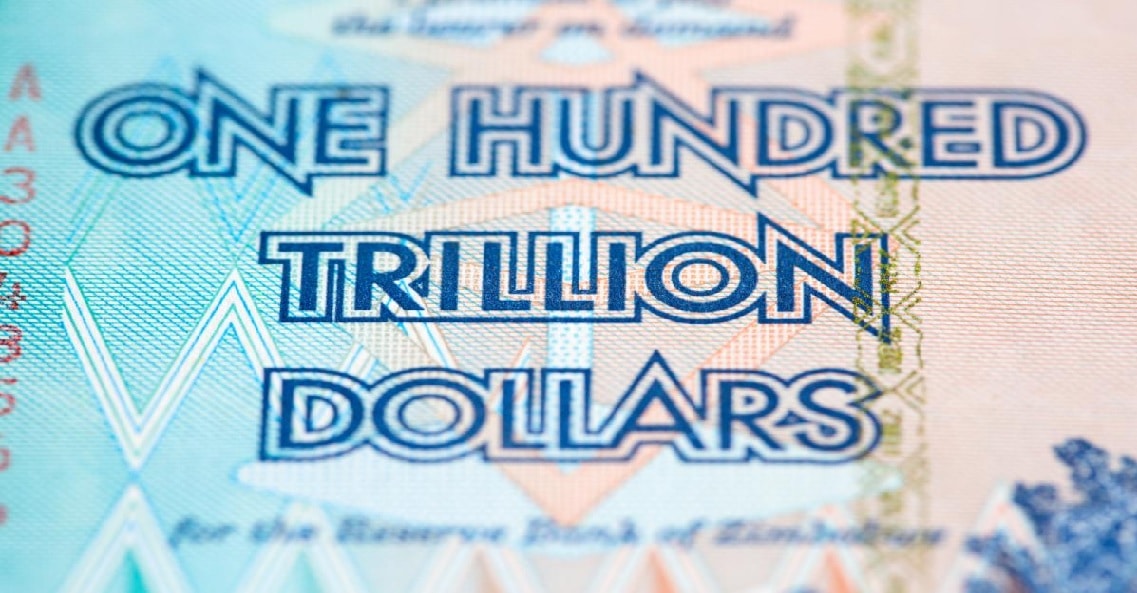 In the name of the pandemic, governments worldwide are piling on debt at astonishing rates. However, no G20 country is doing it as fast as Canada (per capita).

In some countries – notably Canada – rising debt and an exploding money supply is creating an inflationary environment that we have not seen in roughly 40 years.

After decades of stable price increases, many in Canada and the U.S. are now shocked to see the soaring cost of everything from eggs and meat to lumber and houses.

It is important to understand that a debt-based monetary system only functions properly with a consistent inflation rate.

Canada’s Inflation Rate Over the Years

Consider the following provided by the Inflation Tool:

The chart below highlights the point:

History Repeating Itself as Deficits Soar

When Pierre Trudeau was elected Prime Minister for the first time, his government grew Canada’s deficit from a more or less balanced budget in 1968 to about C$13 billion by 1979.

Annual inflation ran between 7% and 11% from the early 70s until the early 80s. And interest rates shot up to an all-time high of approx. 22% by 1981 in an effort to quell inflation. Those who lived through that era can tell you the tumultuous nature of the time.

Today, with his son in power, a free-spending American President and an exceptionally accommodating Federal Reserve, Canada is marching down the same road. With across-the-board increases in spending and escalating prices, history is repeating itself in Canada and the U.S.

To understand the cost of this deficit spending, we turn to the Fraser Institute, which wrote in December 2020,

“During 2019, the federal government’s total revenue was $334.1 billion while the budget deficit for fiscal year 2019/20 was $39.4 billion. If you add these totals together, you get $373.5 billion—almost exactly the same number as this year’s deficit. This means that this year’s deficit is almost exactly as large as it would be in a normal year if the federal government collected no revenue at all. Put differently, if Ottawa declared a complete tax holiday last year, [its] deficit for 2019/20 would have been approximately as large as the actual deficit this year.”

In the meantime, while Canada’s deficit continues to grow to baffling levels, its money supply is skyrocketing in an unprecedented fashion. The chart below says it all:

Note: “Canada Money Supply M0 is the most liquid measure of the money supply including coins and notes in circulation and other assets that are easily convertible into cash,” according to Trading Economics.

Here is another look: 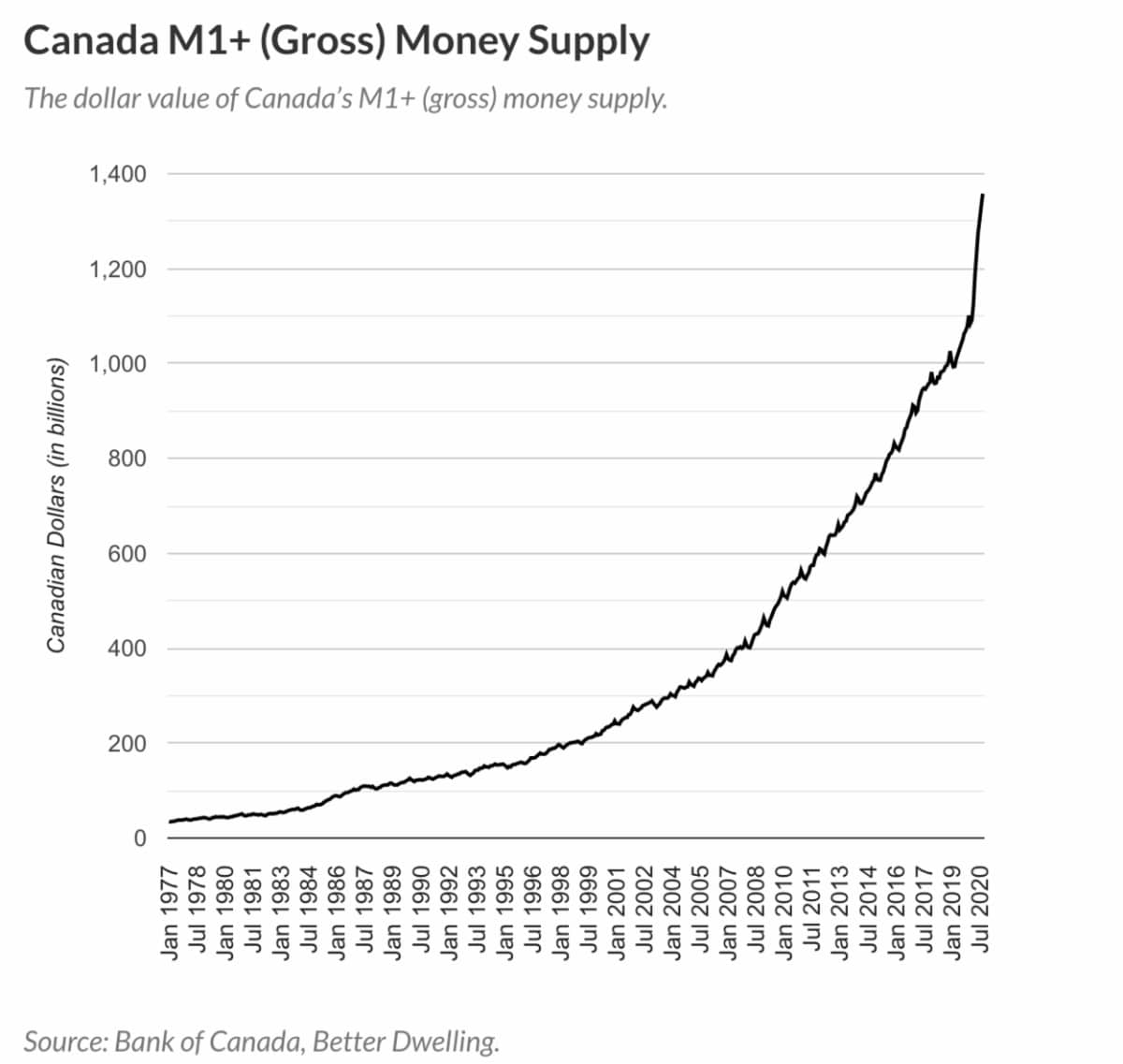 Like its counterparts – including the Federal Reserve in the United States – Canada’s Central Bank is buying record amounts of bonds. The reason for this is to finance deficit spending and to keep interest rates low.

When this happens, money flows from the Central Bank to individual banks, boosting the money supply in circulation.

With interest rates at record low levels, households and corporations are being enticed to borrow unusually large amounts of money. The Bank of Canada’s goal is for this borrowed money to find its way into the economy, propelling people to spend. You are most certainly seeing it in real estate prices this year.

Differences Between Today and the Late-1970s

Unlike the late-1970s, which saw what now looks like small fiscal deficits of $30-$46 billion adjusted for inflation to 2015-levels, the money supply hardly increased at all. Furthermore, the prime interest rate, set by the Bank of Canada, began the decade at 8.17% before rising to 21.75% by 1981.

If it were to go back to 8% within 2 years from today, Canada and many of its citizens would be insolvent.

Note: The blue line above represents the prime rate.

If we look back, the annual deficits were about 1/10th of the current deficits (when adjusted for inflation up to 2015 levels), and interest rates were 3-4 times higher. In other words, they were actively fighting inflation in the mid-to-late 1970s. Today, the Bank of Canada’s policies are arguably fanning the flames of inflation.

Given that money supply barely increased in the 1970s, annual inflation stayed between 8-10% during that time – the highest in generations. The inflation rate would have likely been much higher had the Bank of Canada been increasing money supply like it is today.

Austrian economists argue that increasing money supply is by definition inflationary. While this may be true in theory, what investors and consumers care about are prices. And now, home prices, copper, milk and lumber, are all climbing.

Let’s start with housing, something that affects us all…

CBC reported on April 15th that home sales were up 70% in March compared to a year ago and that average house prices were 30% higher.

“The Canadian Real Estate Association said Thursday that more than 70,000 homes were sold last month, obliterating the previous record for the month by 22,000 transactions. The figure was 76 per cent higher than the same month a year ago…”

When people feel money is losing value, they look to hard assets. Not only that, their pace of transaction accelerates. From the pandemic to low interest rates, a combination of factors has led Canadians to bid up homes across the country. 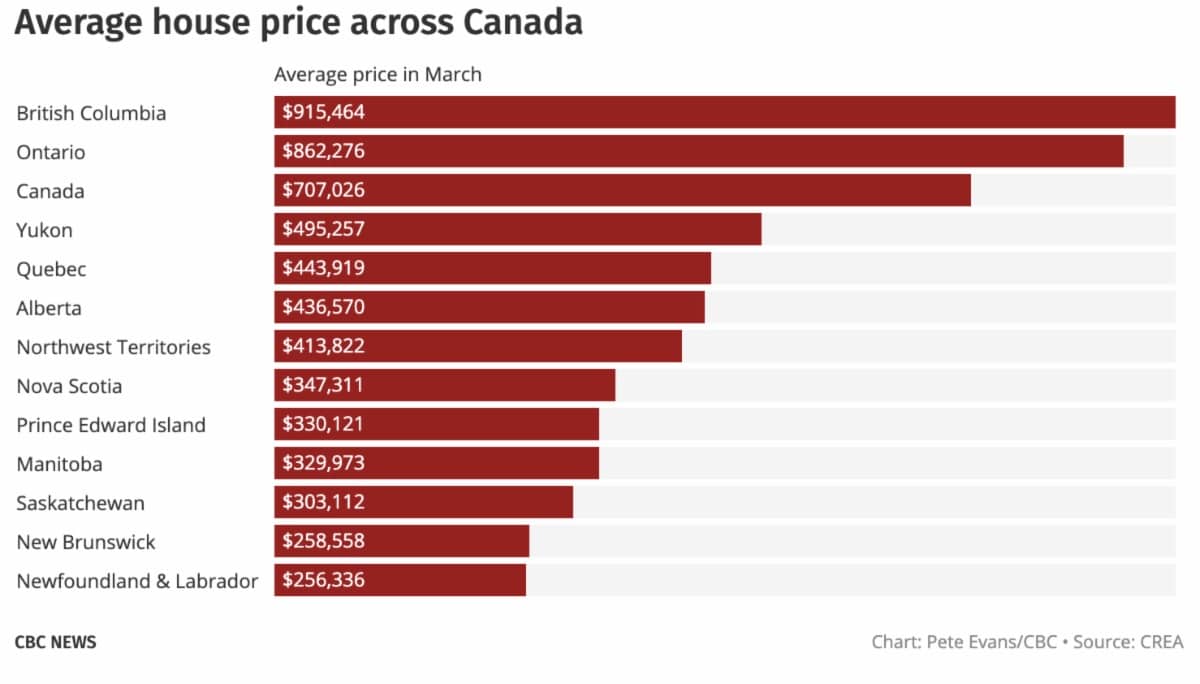 According to the Canadian Mortgage and Housing Corporation data, Canadian housing starts jumped 21.6% in March compared to the previous month, notching another new record.

The article goes on to confirm,

“The seasonally adjusted annualized rate of housing starts rose to 335,200 units in March, well ahead of analyst expectations for 250,000 units, and a new high for all months on record.”

According to a CBC article and data from the Ministry of Forests, Lands, Natural Resource Operations,

“Obviously, people hear about it with the wood products, but across the board, I can’t think of one product that hasn’t gone up anywhere from five to 10 per cent and some products are up about 50 to 60 per cent.”

Housing and wood are deeply interrelated in North America, but price gains and inflation are touching so much more.

Canada is not alone in its run-away home price environment or inflation concerns. With the U.S. implementing the same strategies (record-low interest rates, expanding money supply), home prices are soaring there as well.

The S&P CoreLogic Case-Shiller home price index showed an 11.9% rise across 20 large cities in February – the biggest gain since February 2006.

Price increases in hard assets such as real estate and commodities can occur in relatively muted inflationary environments. It’s important to note, however, that these asset-types do not typically show up in the CPI that central banks focus on when measuring inflation. The CPI focuses on consumer goods and services such as transportation costs, food, and medical care… nevertheless, those goods and services are also rising in cost. Inflation is coming from all directions.

The table below shows the increase in energy prices between February and March of this year:

Note: These commodities were down significantly in March of 2020 when the pandemic began. Pay attention to how substantial the gains are from month to month as we head into the summer.

“The Canada’s Food Price Report, published by Dalhousie University and the University of Guelph, predicted an overall jump in Canadian food prices of three per cent to five per cent next year.”

It would be foolish to dismiss inflationary pressures both as an investor and as a member of society. The annual rate of inflation has already doubled to 2.2% in March from 1.1% in February.

If reported inflation starts creeping up above 5% annually, consumers are going to notice. And for middle and lower income families, these increases will hit the bottom line hard.

We are witnessing the confluence of many potentially disruptive economic forces at the same time:

While governments continue to print money and pile on debt, future generations will be forced to repay those loans. Consumers and investors alike will probably have to endure the oldest tax in history: inflation.

Despite the deflationary factors of an aging population and high debt levels, the risk of increasing inflation in Canada persists due to three factors:

Until one of these factors changes, expect inflation to run hot.