– Company will launch new drill program Wednesday 9th September for up to 1,500m of RC drilling consisting of between 10-15 drill holes.

Ares will again employ More Core Diamond Drilling Services Ltd., to conduct RC drilling for to test for additional fluorspar mineralization within the Lost Sheep fluorspar mine area in Utah to assist planning for possible mining in the future. The Company will drill two or three holes (200 to 300m of drilling) between the old Purple Pit and the recently delineated LGP target to test for possible continuity of fluorspar mineralization and/or depth extension. Personal communications with individuals that worked the underground Purple Pit mine indicates that there is still mineralisation trending towards the LGP pipe at the 250 foot level and below the 325 foot level. These areas will be tested during Phase 2 of drilling.

The Company will also test a series of very prospective targets immediately adjacent to the current operation (250 and 350 meters away) and within the permitted area, based on a conceptual model that links fluorite bearing breccia pipes with exposed fluorspar at surface. A minimum of 5 holes (500 to 700m) will be drilled in this target zone and if successful, will begin to delineate additional fluorspar mineralization readily accessible from surface.

James Walker, President and CEO of the Company said, “The high grade results from the last drill program, and the confirmation that other possible high-grade areas exist within our permitted mine area and extensive exploration land package, has encouraged the Company to move forward its timelines. Ares is currently considering expanding the proposed production capacity and processing facilities at its mine. The Company anticipates secondary and tertiary mining operations at other sites in the future. By moving our drill program forward, we hope to enable faster expansion of our production capabilities once mining operations have commenced. The Company and its staff are very excited at the near-term and long-term prospects, and we are looking forward to commence operations and being the only domestic supplier of metspar and acidspar to the U.S.”

The Company has conducted detailed geology interpretation after examining high-resolution imagery and DEM models obtained from the recently acquired Lidar survey and has identified a fault set that produced repetitive offset of the geological sequence. The majority of the known historic fluorite operations are located in the steep south slopes of a series of different parallel hills, in a “domino” style of extensional faulting. Blind targets are located in the hanging wall offset blocks. The conceptual model indicates the exposed deposits correspond to the lower sections of the fluorspar bearing pipes, and the top parts of the pipes, reaching or not the surface, can be predicted in those offset blocks immediately adjacent to them.

Fig. 1. View looking SW of the Spor Mountain Range. There is a consistent extensional and SE directed “domino” like normal fault system (fault planes highlighted in blue color) where the majority of the known mines and prospects are exposed along those fault planes. Existing fluorite bearing volcanic breccia pipes formed prior to this fault system and were later offset. The pipes can be severed in several sliced sections as offset by subsequent parallel faults of the same system at different elevations. Blind targets and continuity of the mineralization can be found in the hanging wall displaced blocks to the SE of each fault.

Geological evidence at the Lost Sheep and Purple Pit deposits supports the geological model and was successful in finding additional fluorite bearing pipes when geologists were directed to prospect areas of interest. Several breccia pipes exposed right at surface where located, including the spongy textures and fluorspar mineralization (see photo below). 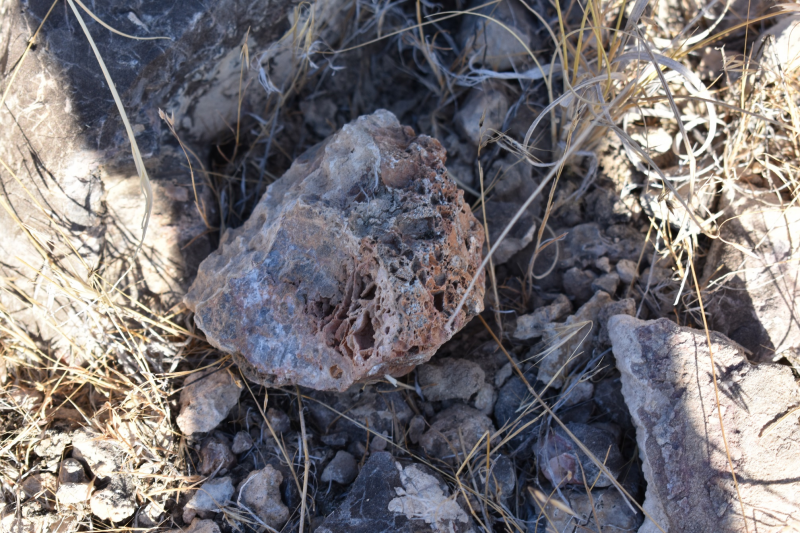 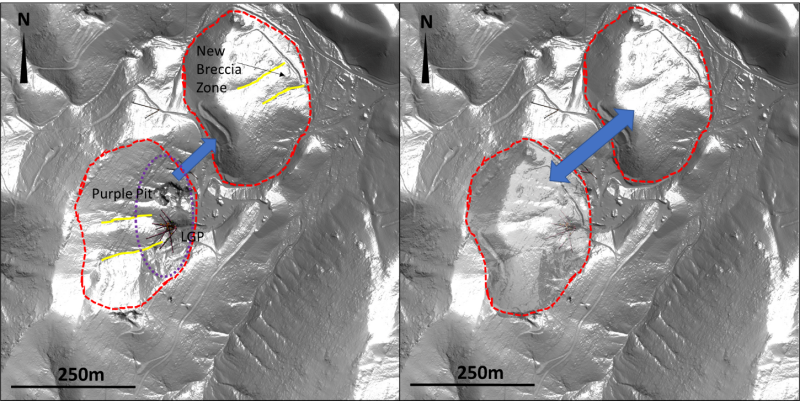 Fig. 3. The left image shows the current location of the LGP and Purple Pit (high-grade fluorite breccia pipes) in a high-resolution DEM obtained from recent Lidar data. Blue arrow indicates fault direction of the offset block. The right image shows the referred hill, cropped and overlain on top of the current mine area, being a perfect fit in both slope angle, orientations, and also in stratigraphy. 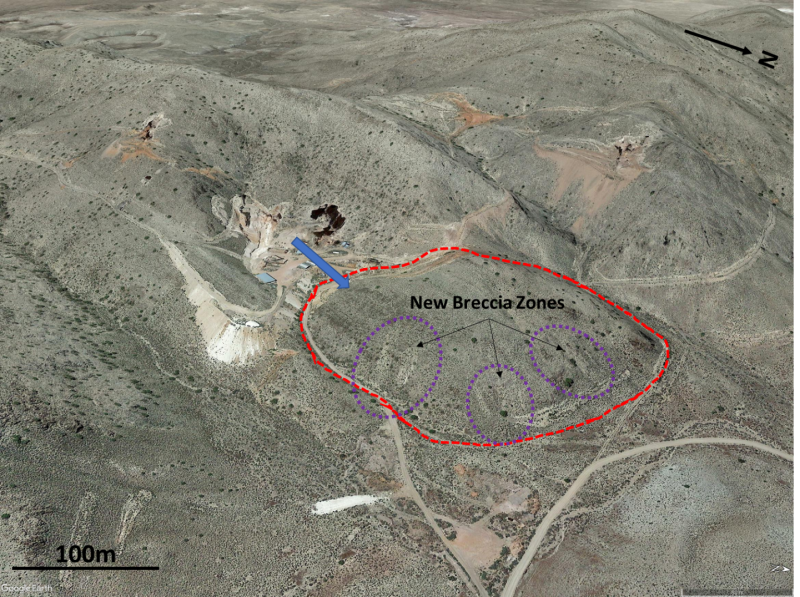 Fig. 4. Google Earth satellite image and highlight of the offset block where new targets are located. Clear disruption of the bedding can be observed in the left (south) part of it, and two lighter alteration zones (pipes) related to it. Breccias had been found in the thee target zones, coincident with the conceptual target