Lithium-ion batteries continue to drive demand for cobalt. As investors became aware of the demand surge heading for the cobalt market, prices began to rise. After trading flat for years, prices began to break out in 2016. 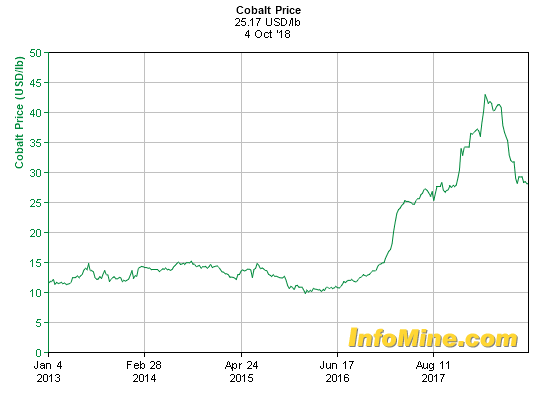 Like most metals, a lot can change in a year. While the cobalt price has now come way off its highs, demand for the metal remains strong. Still, strong future demand doesn’t buoy stock prices when metal prices tank.

For stocks operating in the cobalt market, on the TSX and TSX Venture, share valuations have tanked along with the metal’s price.

Cobalt 27 Capital (KBLT: TSXV), one of the largest companies on the TSX Venture by market cap (approx. $485 million) closed at $5.72 Friday after touching $14 earlier in the year.

Fortune Minerals (FT: TSX) is another example. The junior cobalt-focused stock traded for $0.38 earlier in 2018, but closed Friday at just $0.10 per share.

Despite the collapsing value of most cobalt-related issuers, demand for the metal is forecasted to increase in the coming years. With so much supply in the Congo, one has to wonder if tech and EV giants, such as Apple and Tesla are working to create less cobalt-dependent products. For the time being, cobalt is a necessary ingredient in many tech devices from phones to computers; and, most importantly, EVs. 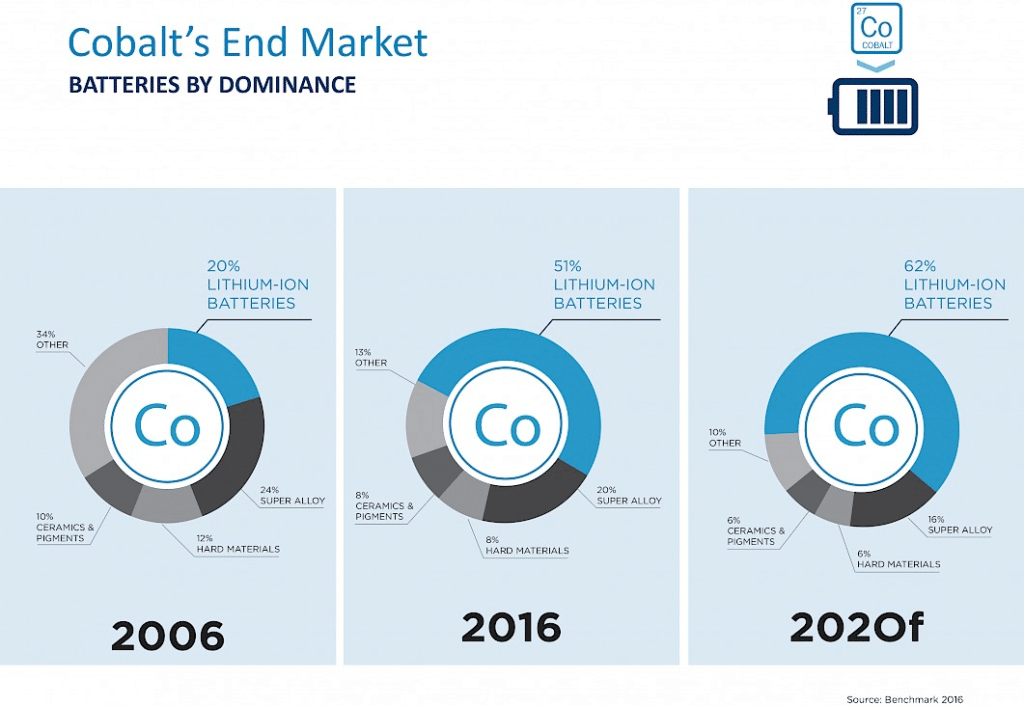 According to the Cobalt Institute, “Cobalt is classed as a critical raw material by the EU due to both being an essential mineral in creating a sustainable planet, and 55% of the global supply originating from the politically unstable DRC.”

Cobalt is a ‘critical’ metal, according to the U.S. government. The important nature of cobalt is largely tied to where the majority of global supply is sourced: the DRC.

The DRC or the Democratic Republic of Congo contains approximately two-thirds of the world’s cobalt. By far, the majority of identified deposits of cobalt exist in the Democratic Republic of Congo. A unique situation, given no colonial power, has been able to subdue and extract large quantities of the metal. Take South Africa (gold, platinum, diamonds) or even Peru with its copper and silver. Yes, the DRC is a war-torn nation, totally corrupt and unreliable at the best of times. Check out this infographic from Visual Capitalist, summarizing the many dangers of a potential supply disruption from the DRC.

In a Fortune Magazine interview, published on August 24, 2018, the Africa’s Copperbelt contains two-thirds of the entire world’s cobalt. The documentary-style expose explores Congo’s cobalt mines and the child miners who are risking their lives on a daily basis. The host of the interview concluded that,

“Sadly, I think a lot of companies will invest a lot of money to try to get out of the Congo altogether. And, I say sadly, because honestly the local people really fear that that’s going to happen. But, for a lot of companies sitting in Silicon Valley, it’s easier for them to say, let’s just put billions of dollars into creating a non-cobalt battery and get out of this country.”