What year is it? Was yesterday a dream? Did Barrick not hit a 25 year low yesterday? Did the TSX Venture not close at a new all-time low of 616? Do people still care about a junior gold company’s drill results?

Apparently, the answer is yes. At least in regards to Goldstrike Resources. Come to think of it, there are only a handful of exploration companies still putting out drill results in this market. And, even less of them call the Yukon home. Most are on life support or conserving cash, hoping and praying market conditions improve.

For news on any junior gold stock to move a market in 2015, the results better be spectacular.

“it has intersected mineralization containing coarse visible gold in 5 drill holes (50 per cent of the holes drilled) at Gold Dome and Goldstack.”

Gold Dome is a very wide vein and the reported “true width of the mineralized zone in Hole PSVG15-08 is 9 metres.”

“Core from that hole contains coarse visible gold ranging from 1.5 mm to 3 mm in size in multiple locations. This new discovery significantly expands the area of known gold mineralization, and shows that Gold Dome has strong potential to host multiple new gold bearing stockwork zones at depth and along strike.”

Interestingly enough, these results had Goldstrike’s market rocking Tuesday morning, up 21% and the second most liquid stock on the TSX Venture.

“We have intersected visible gold in 50% of the holes drilled this year. The presence of coarse high grade gold in all three zones and in multiple stacked layers that remain open shows that the entire property is part of a new district scale gold system that is underexplored, and presents a unique opportunity. We look forward to releasing assay results when they are available and to the next phase of drilling.”

Click here to read the entire quote and press release.

Goldstrike Resources‘ 1-year chart doesn’t look like the majority of junior gold miners listed on the TSX Venture. Instead of falling off a cliff at some point in the past year, its shares are up more than 300% from the lows of late 2014 and early 2015. 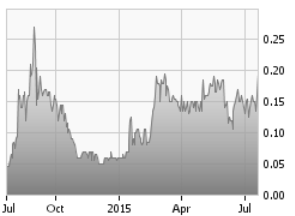 What has kept interest high in Goldstrike Resources for so many months in one of the worst gold bear markets in history?

The fact it is drilling and finding visible gold is one reason. But there is a bigger story…

So, while a new gold district is intriguing, it is still 2015. Let’s look at some recent results that have Goldstrike trading at an approximate $20 million market cap Tuesday morning. Keep in mind, Goldstrike is an exploration company operating in the Yukon (an area with limited infrastructure).

Goldstrike’s Discovery hole in the Goldstack Zone near the west end of the Yellow Giant Trend intersected shallow gold mineralization grading 4.05 grams per tonne over 28 metres, including 10.91 grams per tonne gold over 10 metres and remains open, according to the company.

Like many projects in the Yukon, infrastructure is limited as the company notes floatplane access on property, with an airstrip 12 kilometres to the south.

So, while a discovery has been made by Goldstrike Resources which has the potential for a new district scale gold system, the project remains off-grid. My hat goes off to the company and its investors who are keeping the faith in this junior gold miner.  This is one of the toughest gold markets, ever.

This is not an invitation to purchase any securities mentioned in this report. Pinnacle Digest does not endorse or recommend any of the referenced securities. At the time of publication and distribution of this report (9:00AM PST on July 21, 2015) neither PinnacleDigest.com, its employees or consultants owned shares in any of the mentioned companies in this report. This article is intended for informational and entertainment purposes only. The author of this article bears no liability for losses and/or damages arising from the use of this article. This report may contain technical or other inaccuracies, omissions, or typographical errors, for which PinnacleDigest.com and its parent company assumes no responsibility. We do not guarantee that any of the companies mentioned in this report or on PinnacleDigest.com will perform as we expect, and any comparisons we have made to other companies may not be valid or come into effect.