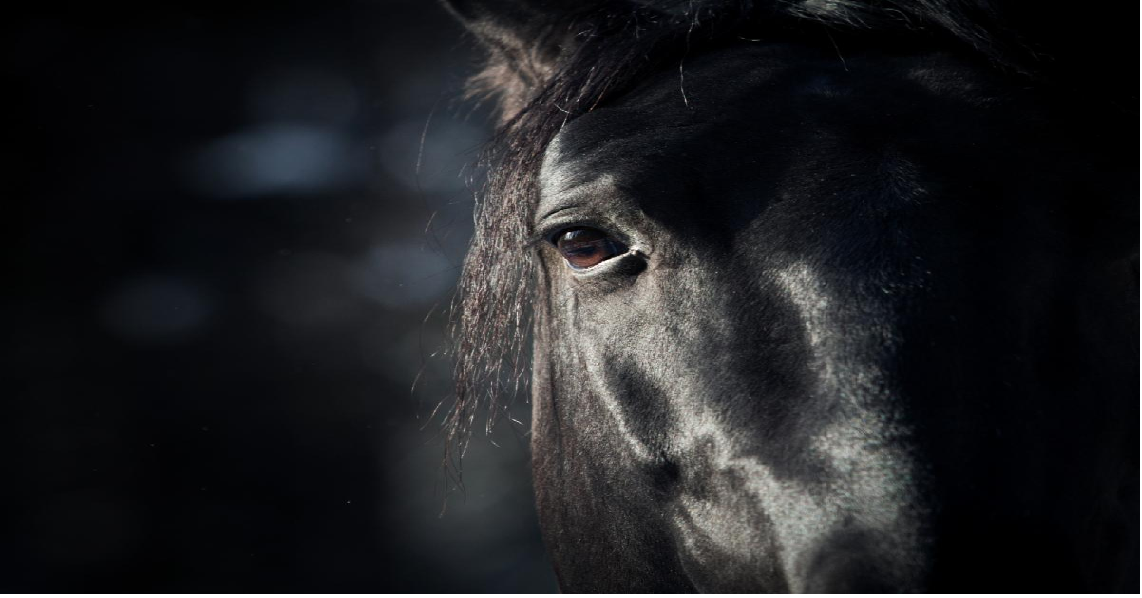 When it comes to EV battery metals, most of the attention has gone to lithium in recent years – and not undeservedly so. Lithium is in limited supply and it’s critical to all current and next-generation battery technologies. But there is a catch…

Take a look at the chart below, breaking down the key minerals in an EV battery:

While the cathode is composed of various minerals, the entire anode is made of just one material: Graphite – the single-largest mineral component of an EV battery. So, when one hears lithium battery, think graphite battery…

Graphite Battery to the Rescue?

Since the birth of Li-ion batteries, graphite has been the material of choice for anodes, given its relatively low cost, abundance, high energy and power densities, and long life cycle.

Silicon – or all-silicon – anodes have been touted as a potential replacement for graphite anodes for several years. However, though it may boast of a storage capacity ten times greater than graphite, silicon anodes have struggled to make it into commercial Li-ion batteries.

Performance issues such as poor electrical conductivity and large volume variation during charge/discharge (which causes a severe loss of capacity over time) have hampered silicon’s chances of breaking through.

So, with silicon (and other materials) out of contention for commercial use in battery anodes, graphite remains the dominant go-to material for lithium-ion batteries. And from the looks of it, that won’t be changing anytime soon…

In May 2020, the World Bank released a comprehensive report titled, Minerals for Climate Action: The Mineral Intensity of the Clean Energy Transition. In it, the financial governing body shed light on the mineral production required to achieve a ‘below 2°C future.’

The report found that,

“Graphite and lithium demand are so high that current production would need to ramp up by nearly 500 percent by 2050 under a 2DS [2-degree scenario] just to meet demand.”

The World Bank expects nearly 53.8 percent of mineral demand from energy storage to come from graphite. See the chart below:

Additionally, if graphite remains the sole anode material in Li-ion batteries, demand for the mineral is projected to grow at an astonishing rate this decade. See the chart below:

A quick word about solid-state batteries.

In doing so, manufacturers could theoretically replace the graphite anode with another higher-storage capacity material, such as silicon or lithium, without encountering the performance issues mentioned earlier.

Well then, if solid-state batteries were ever to see commercialization, would demand for graphite drop substantially? Far from it.

Even if the anode material veered away from graphite, the mineral would still play a role in solid-state batteries. Lei Cheng, a chemist and material science expert at Argonne National Laboratory – a U.S. Department of Energy research center – in conversation with the Washington Post’s Pranshu Verma, expressed confidence that solid-state batteries will one day replace the current Li-ion batteries. In the article, Cheng explained that,

“The new batteries, which would replace flammable liquid electrolytes with a solid layer of graphite, could be safer, reduce dependency on nickel and cobalt, and hold more power in a cheaper way…”

So, in the final analysis, solid-state batteries should be less of a concern for graphite than for EV metals such as nickel and cobalt.

And, if you were wondering about timelines for the commercial application of solid-state batteries, Autoweek’s Jim Motavalli wrote in his May 2022 article,

“Some experts see 2030 as the breakthrough year for solid-state commercialization, but others are skeptical.”

To understand the graphite supply landscape, it’s important to distinguish natural from synthetic graphite and how they relate to each other.

Natural graphite is mined from the earth, whereas synthetic graphite is artificially produced by heat treatment of petroleum coke, coal-tar pitch, or oil.

“Synthetic graphite accounted for about two-thirds of the graphite consumption, which was largely concentrated in Asia.” 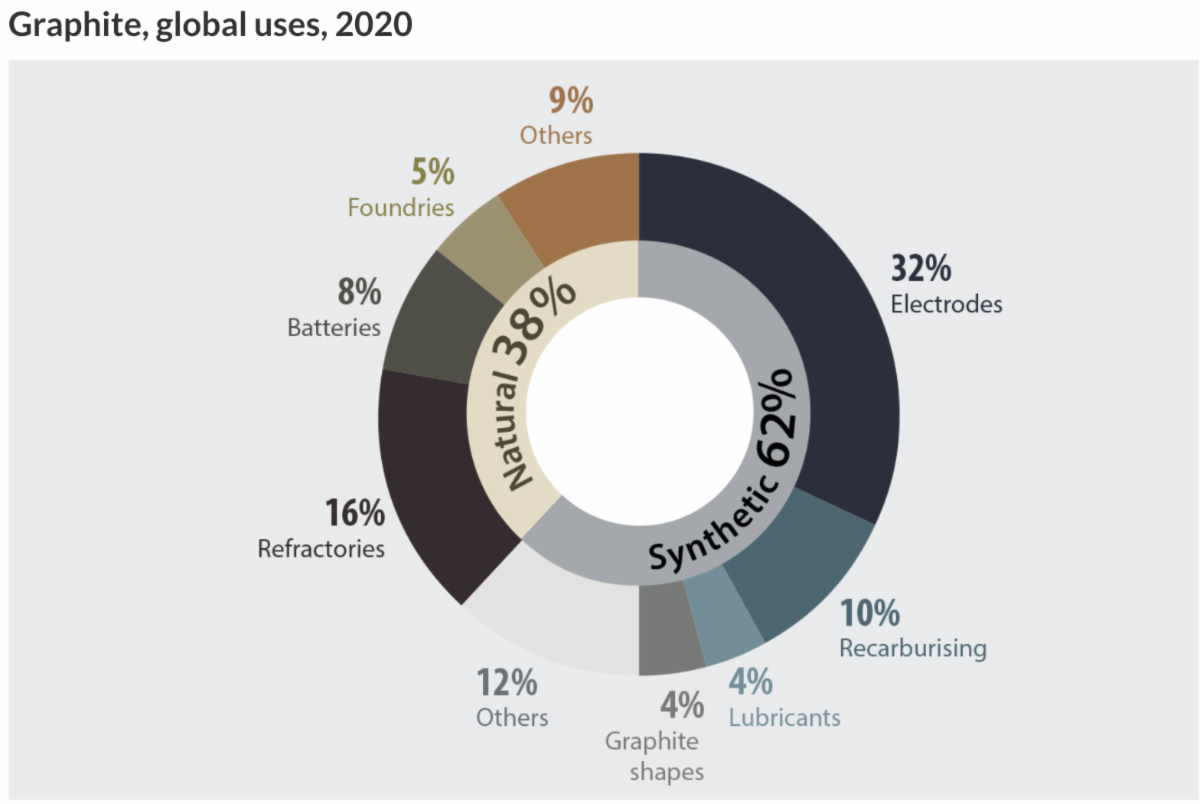 Consequently, it’s improbable that synthetic will supplant natural graphite entirely down the line. In fact, the European Carbon and Graphite Association forecasts indicate a growing demand for both natural and synthetic graphite.

“Many natural graphite producers are looking to move downstream to produce higher-purity products like coated spherical graphite, which could rival synthetic’s energy densities and can compete on performance in the battery anode materials sector.”

Mine production of the black mineral has stayed relatively flat in the last 10 years – somewhere between 900 and 1200 metric kilotons annually.

China controls more than 80% of the natural graphite market – producing 820 metric kilotons of last year’s 1000 kiloton output, according to the USGS. See the chart below:

Graphite mine production in 2021 by major countries
(in 1,000 metric tons)

According to Mordor Intelligence, the top 5 major players in the synthetic graphite market feature three Chinese companies, one Japanese company (#2), and an American manufacturer, GrafTech International (#1). See the image below:

According to the USGS,

“North America produced only 1.2% of the world’s graphite supply with production in Canada and Mexico.”

Natural graphite hasn’t been produced in the U.S. since the 1950s. In Canada, there’s only one significant graphite-producing mine: the Lac des Iles mine in Quebec, owned and operated by Northern Graphite Corporation. However, several graphite exploration projects are currently underway in Canada, and most (if not all) of them are in Quebec. Per Osler’s Simon C. Baines and Michael Pede,

“…Quebec has a number of lithium and graphite projects, many of which are in more advanced stages. Several of these Quebec projects are open pit mines, which are in the process of undergoing environmental assessments by the Impact Assessment Agency, or have recently received approval. Of these, there are six lithium projects and 10 graphite projects.”

Despite having relatively small graphite resources, two companies are currently developing graphite mining projects in the U.S. – Westwater Resources in Alabama and Graphite One (America’s largest graphite project) in Alaska.

One of the challenges with graphite is that, unlike many other commodities, there’s no standard pricing mechanism for it.

Neither natural nor synthetic graphite has a spot or futures market, so transactions for the product are based on direct negotiations/contracts between buyers and sellers.

The cost of the sold product depends on the quality of the flake graphite, such as size, grade, and percentage purity (i.e., how much of the flake is graphitic carbon). Flake graphite is simply the concentrate from the processed graphite ore separated into different sizes (or flakes).

Furthermore, around Christmas last year, another PRA, Benchmark Mineral Intelligence, projected a global deficit for graphite beginning in 2022 owing to strong demand from the EV sector. Benchmark expects demand from the battery sector to rise 30% annually until 2030.

Few industries have that kind of growth rate expected for the better part of the next decade.

Graphite’s impressive rise underscores its importance to the EV movement and batteries in general.

China, the critical mineral heavyweight, is also the world’s undisputed purveyor of graphite. As outlined, the Asian nation controls more than 80% of the world’s mined graphite and is the most dominant player in the production of synthetic graphite. This fact alone is likely creating some uneasiness in the market that may be responsible for graphite’s price gains in recent years.

Global graphite demand has sparked a surge in North American exploration for the mineral. The necessity to domesticate production and other supply lines will continue. The question for speculators is: Which mines will come through to production first and capitalize on the elevated prices?

The time to short-list potential players is now.