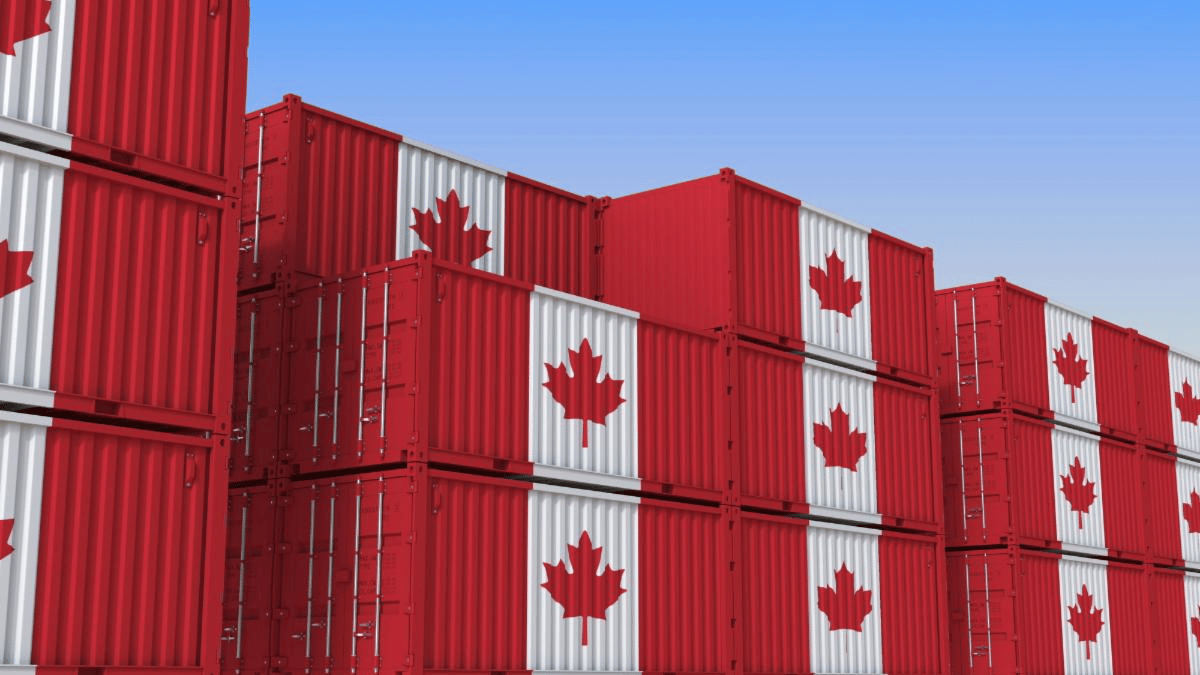 Canada’s Liberal government is (finally) buttressing the country’s mining sector. It appears to have dawned on the Liberal party that the path to net-zero emissions by 2050 will require an abundance of select minerals and metals – the vast majority of which can be found on Canadian soil.

The stage has now been set. Canada looks poised to surpass several countries (including the U.S.) as the leading producer of key green metals such as lithium and nickel… but more on that later.

First, let’s explore what may have forced the Liberals’ shift in sentiment towards Canada’s mining sector.

Before getting to the Canadian government’s historic decision to funnel billions to its domestic mining sector, let’s look at Canada’s balance sheet – as it relates to trade.

On account of running massive deficits before, during and after the pandemic, the Liberals are now cash-strapped, and are looking to generate revenue the old-fashioned way: by taxing an expanding economy.

For some context, Canada’s balance of trade has been in expansion mode since the early days of the pandemic. However, the multi-billion-dollar surpluses really took hold in early 2022.

Note: In the last 12 – 18 months, the growth rate of the price of oil has largely mirrored that of Canada’s trade surpluses.

Surpluses are a big deal. It could mean an increase in the quality of life for most – if not all – Canadians. Heather Exner-Pirot, senior fellow at the Macdonald-Laurier Institute, wrote in her op-ed piece published by the Toronto Star,

“As we enter this new phase, the benefits of maximizing Canadian resource outputs are proving irresistible to even the most urbane of Laurentians. The resource sector is providing a windfall for government revenues (the oil and gas industry alone is projected to add $20 billion to federal and provincial coffers in 2022), creating high paying jobs and indeed affording much-desired soft power to Canada on the global stage.”

Canada Has Much to Learn from Australia

Surpluses month after month (including a 14-year, CAD$5 billion, high) surely implies that Canada is doing pretty well, right? Wrong…
We are underperforming, and everyone, including the Liberal government, knows it. Look at Australia, a comparable economy blessed with immense natural resources, though not quite as much as Canada.
Australia’s trade surplus expanded to a record high of AUD 15.97 billion (roughly CAD$14.3 billion) in May 2022. Australia has a fraction of Canada’s oil and gas but is a mining giant (and the world’s leading lithium producer and exporter). Australia also has multiple natural gas export facilities, making it one of the leading exporters of LNG in the world.
According to the Australian government,

In Will Canada Ever Succeed at This?, we explained the country’s failure to build an LNG export facility. Canada’s mistakes today could be Europe’s problem tomorrow, as Europeans are now gearing up to pay unthinkable prices for energy this winter. But that’s another story… back to Canada’s mining opportunity.

Can Canada Triple its Trade Surplus?

So, how do we triple a $5 billion-dollar surplus to put us within range of Australia’s numbers?

An LNG facility would be nice, but becoming the world’s largest producer/exporter of lithium would be a gamechanger. The thing is, Canada doesn’t produce any lithium… yet.

North America’s largest country is home to millions of tons of lithium, and could break out onto the world stage in short order. If EVs continue to see widespread adoption, as almost every expert expects, lithium will be the new fuel with ever-increasing demand.

The five-year chart for lithium below paints a clear picture of insatiable demand amidst limited supply.

So, who is benefitting from these record high lithium prices? 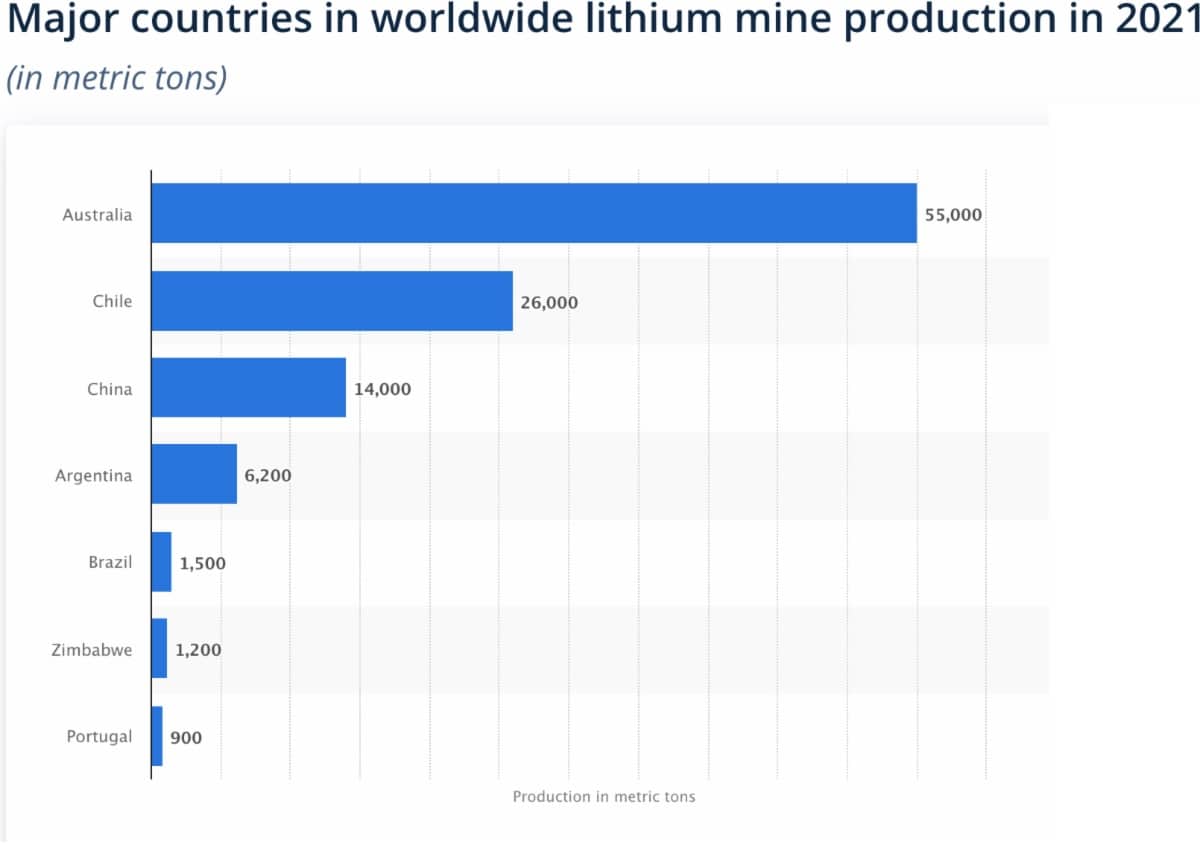 It’s time for Canada to get serious, and knock everyone (including Australia) down a spot on that list. And, boosting lithium production beginning in 2023 is how it starts.

Canada’s 2022 budget was released in April. To the utter shock of mining proponents, the Mining Association of Canada got basically everything it asked for in a CAD$3.8 billion commitment. Stunning, when one considers the sector often fights against government policy and red tape – especially when the Liberals are in power.

The commitment boiled down to two things: bolstering government tax revenue and reaching net-zero emissions by 2050.

According to the Mining Association of Canada (MAC), the budget:

Note the frequency with which the word “critical minerals” appears throughout. In 2021, the Liberals named lithium a ‘critical element’ and one essential to the economy. If the Liberals want to go green, they must first dig up the dirt – by boosting lithium production.

This government support could be an absolute bonanza for promising mineral projects in Canada. And the country could become the world’s leading lithium producer.

Starting from Zero, Canada is about to Supercharge Lithium Production

As we’ve written about in the past, there is about to be a flood of supply hitting the lithium market over the next 24 months. Dozens of projects worldwide are nearing production moments that will finally ease the industry’s massive supply deficit – and Canada is no exception.

“…all in Quebec — are expected to begin production in 2023. The three projects are expected to add over 50,000 tonnes of lithium carbonate equivalent (LCE) production. La Corne targets a total production capacity of 265,000 tonnes per year in the longer term, assuming its planned expansions are authorized and financed.”

Fifty thousand tons might not seem like a lot, but it would make Canada the second largest producer on earth – behind Australia’s 55,000 tons. In short, it could only be a matter of time before Canada becomes the world’s largest producer and exporter of lithium, boosting her trade surplus even further.

For those counting on endless supply deficits and sky-high lithium prices, know that Canada isn’t the only one racing to bring on additional production. Benchmark Mineral Intelligence expects new and restarting lithium assets to add about 355,000 tonnes of LCE capacity by 2023. So, with the changing supply landscape globally, Canadian lithium can’t come online soon enough.