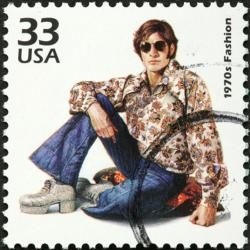 The next resource investing fad has arrived: graphite stocks.

Over the coming months you are going to be hearing more and more about the shrinking supply of graphite, the lack of graphite mines operating outside of China, the control China is pursuing over the graphite market (export duty and VAT implemented) and the expected demand increase over the next decade. Sound familiar?

This rhetoric, although based on real fundamentals, is going to create another overbought and overplayed sector.

Graphite stocks will be the next fad investment, just as rare earth stocks were in 2010, molybdenum stocks in 2006 and 2007 and uranium stocks in 2005.

Just to be clear, fads aren’t a bad thing for us investors to get involved in, nor do they lack fundamentals, but they often follow the same pattern. There is the sudden bombardment of scary, supply shrinking and demanding increasing rhetoric being preached by newsletter types, a sudden staking surge of wannabe mining companies, an inflow of institutional money followed by a parabolic rise in stock prices. Shortly after that broad parabolic rise within the sector (3 to 6 months), the fad becomes old news and the money dries up for the pretenders. This leaves the tried, tested and true mining plays (within the sector) still grinding – just as they were many years before graphite was even a thought on investors’ minds. And naturally, the pretenders move onto the next fad.

Much like boy bands, investment fads rise quickly and are forgotten just as fast. Only the true rock stars last…in music and geology.

Building a mine or developing an exploration project is a marathon. It takes a lot of money, many years and exceptional management talent. The word ‘fad’ doesn’t exist in the minds of true miners and prospectors. However, fads are something that people like you and I can make a lot of money investing in if we are ahead of the curve.

*Companies trying to stake land around existing, advanced graphite projects will soon be popping up everywhere.
Right now I believe the graphite sector is in the early stages of the ‘fad’ and will provide a ton of profitable opportunities. Even some of the pretenders will provide great profit taking opportunities for the gamblers out there. But for me, I’m looking at the graphite explorers/miners who have been in the business for years. As I said, building a mine takes years and companies who are truly serious about taking advantage of the graphite supply issues saw this impending craze coming years ago. I like to invest in companies who have management with that kind of shrewd analyses – proactive thinkers, not reactive pretenders. Let’s not forget, it takes anywhere from 5 to 10 years (sometimes longer) to develop a mine. Any company just getting involved in an early stage graphite project now is going to miss out on the demand increase expected over the next two to five years.

So here we are. Mid February 2012. Graphite is starting to become the new buzz word of the resource market. Soon, graphite stock websites, blogs and mini-conferences will start popping up all over North America. This is a clear indicator we are nearing the end of the early part of the fad, which is a fantastic time to be buying into stocks within the sector. The vast majority of investors are just starting to hear about the shrinking supply and increasing demand for graphite from all sources credible or non. Remember, these reporters, writers and analysts can’t talk about gold and silver every week, sometimes the flavor of the month has to change just to sell a few copies. Next, we will see a staking rush by all the pretenders out there just trying to ride the wave of momentum. If you’re going to get involved with graphite plays, you want to be in well before the staking rush begins. This is very important because exploration news and money will start to flow into the sector during and immediately following the staking rush.

I believe we are in the same stage of the ‘graphite fad’ that we were in at the beginning of January 2010 for rare earth stocks; a very advantageous moment to position oneself – especially in some of the explorers and miners with advanced projects (proactive thinkers). Below I’ve included examples of the stock charts for some of the major players in the rare earth space. Their charts are almost mirrors of each other – a classic fad investment with a broad based parabolic rise. This is a pattern I believe is coming for graphite stocks; with that stated, I believe the graphite fad will not be as popular as the rare earth fad. Consider the rare earth fad to be the Backstreet Boys and the coming graphite fad comparable to The Osmonds.

The ‘smart money’ is getting involved in graphite plays now. ‘Genius money’ is already in, but don’t beat yourself up for not being a part of that group as it primarily consists of the good ol’ boys. Both groups will make money on this fad just as they did with rare earth stocks (genius money was involved in rare earth plays long before January 2010).

Now that I’ve explained how I believe this fad investment will play out, let’s get into the real fundamentals behind why graphite is going to become such a hot investment.

Graphite will be a fad investment, but there are very strong fundamentals working in its favor for heightened demand and higher prices over the next decade.

First and foremost: China, Brazil and India produce nearly all of the world’s graphite, with China responsible for the bulk of it. It is estimated that China controls 75% of world graphite production – a very similar situation to rare earths, although not quite as extreme. China was producing over 90% of the globe’s rare earth supply before the fad in that sector went on its parabolic rise.

Note: 3 of the 4 BRIC nations control over 90% of the world’s production for graphite.

Below is a graph of worldwide graphite production provided by the United States Geological Survey (USGS). 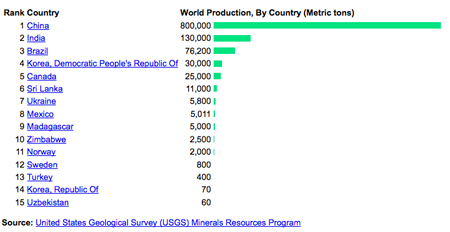 China dominates the world’s production for graphite and it’s well aware of the coming supply issues we will face.

One Problem For China

Chinese graphite mines are becoming less economic at these prices as many require deeper digging in order to get to the economic material. Because of numerous supply issues, China is implementing a VAT and export duty on graphite. China is also importing a substantial amount of North Korea’s large flake graphite which indicates it is having issues meeting its own domestic demand, despite producing roughly 75% of the world’s graphite.

On July 30, 2010 the European Commission released a report titled ‘Critical raw materials for the EU’. In that report it listed graphite as one of 14 critical raw materials for the EU. The report states “As noted, this is due to their high relative economic importance and to high relative supply risk. The ‘environmental country risk’ metric does not change this list of critical materials.”

The report goes on to note:

Jack LIfton, regarded as the authority in the rare earth space, stated in an interview with The Critical Metals Report that “Governmental bodies have shown increasing concern about graphite’s importance. The U.S. Department of Homeland Security’s Critical Foreign Dependencies Initiative lists Chinese graphite mines as essential sites that would damage American interests if attacked.”

Lifton goes on to state “Graphite has traditionally been considered a boring, mundane industrial mineral, evoking thoughts of pencils, golf clubs and tennis racquets. Investors should think again. Traditional demand for graphite in the steel and automotive industries is growing 5% annually, and graphite prices have tripled. New applications such as heat sinks in computers, lithium-ion batteries, fuel cells, and nuclear and solar power are all big users of graphite. These consumers are beginning to place substantial demands on existing production-and over 70% of that production is from China, which is no longer selling this resource cheaply to the rest of the world as the country’s easy-to-mine, near-surface deposits are becoming exhausted.”

The need for graphite is becoming more widespread as it’s being used in green products, consumer and commercial products. The increased demand for many products graphite is used in is driving prices through the roof and putting its future supply in question. Below is a quick rundown of many key graphite uses in our modern world.

*    Widely used in the steel and automotive industry due to its high resistance to heat.

*    Heavily used in manufacturing as a steel additive

*    Provides an economic edge as a material used in solar panels

*    Used in electric bikes which are widely used across China and many other developing nations as a main mode of transportation.

In Canada, a country that is expected to lead the charge in new graphite discoveries, there are very few advanced staged deposits – as is the case with most of the world. There is only one producing graphite mine in Canada, which is located in Quebec and operated by a Swiss company. About 2 hours outside of Ottawa, Northern Graphite (whose stock has doubled in the last month alone) has a project which it aims to have in production by 2013.

Graphite projects in Ontario and Quebec will likely be common place as this fads picks up steam. Soon enough there will be a new major discovery or project advancement within these two provinces. Ontario and Quebec will be the epicenter for the graphite investing fad. When looking to play the graphite trade, these two provinces are where you’ll want to start your hunt.