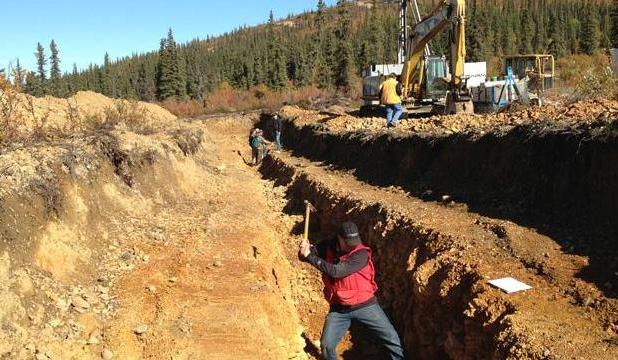 Kaminak Gold Corporation (KAM:TSXV) had one of the great days in its history Monday as news broke that Ross Beaty and Zebra Holdings and Investments planned to invest $13.5 million in the company.

This gave new and old shareholders hope that the company would indeed secure the funds necessary to potentially reach the ultimate goal of production.

An age old rule of investing is to try your best to never throw good money after bad. News that Beaty and Zebra Holdings were putting in a combined $13.5 million sparked great enthusiasm and optimism that Kaminak has what it takes to achieve future financings.

While many junior gold companies have gone quiet during the summer months, Kaminak has been pumping out news releases with great consistency. Kaminak Gold is one of the last active gold explorers in the White Gold District of the Yukon Territory, Canada. The company is developing 100% owned Coffee Gold Project.

Below is an excerpt from section 16.2, with the title: Proposed Mining Method

“The Coffee project deposits are amenable to be developed as an OP mine. Mining of the deposits is planned to produce a total of 53.4 Mt of heap leach feed and 212.4 Mt of waste (4.0:1 overall strip ratio) over a twelve-year mine production life (including 2 years of pre-production). The current LOM plan focuses on achieving consistent plant feed production rates, and mining of higher grade material early in the production schedule, as well as balancing grade and strip ratios.”

Finally, today in the dead of summer, on July 14th, Kaminak Announces $13.5 Million Investment by Ross Beaty and Zebra Holdings and Investments S.a.r.l.

“Kaminak is very pleased to be welcoming both Ross Beaty and Zebra Holdings as significant new shareholders, at a pivotal time in our Company’s history. Kaminak recently completed a Preliminary Economic Assessment for our Coffee Gold Project, which indicates a robust, high margin, rapid pay-back, 11 year, open pit, heap leach project in Canada at current gold prices. The Company will now have sufficient funds on hand to undertake a bankable feasibility study and advance the project towards a production decision.”

The Company’s reported that its cash position will be approximately C$26.5 million following completion of the Private Placement.

And that, the net proceeds of the Private Placement will be used to continue exploration and development of Kaminak’s Coffee Gold Project in Yukon.

The move propelled members ‘rayme’ ‘hmayers’ and ‘plyong8’ up the standings in July’s Stock Challenge.

The TSX Venture was the only index in North America to decline Monday.