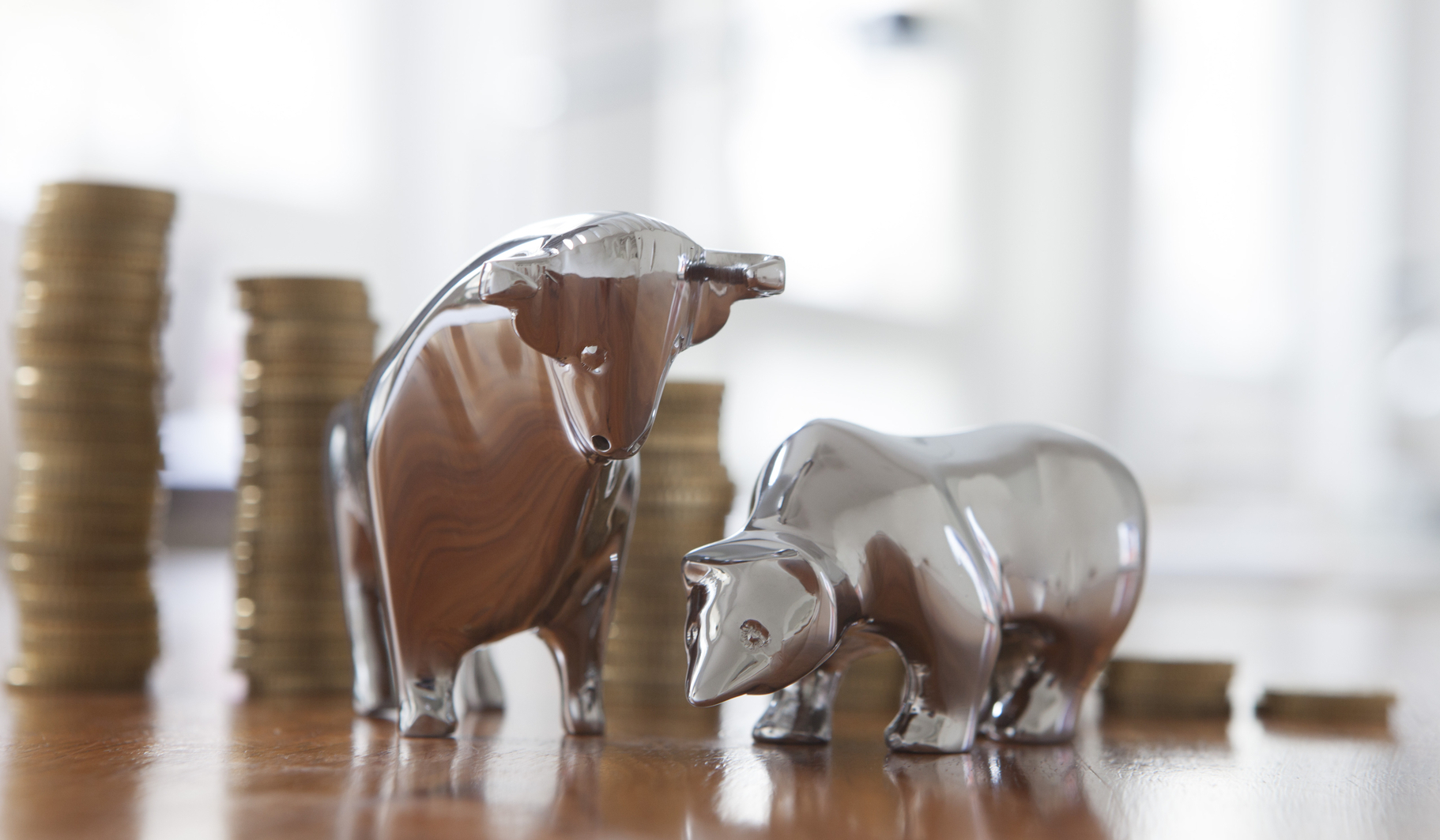 Silver is either going to go on an epic run very soon, or the price of gold will collapse.

Anyone who ignores history does so at their own peril…

Silver has been the top-performing commodity in 2016. Although historically tied to the value of gold (but more volatile), silver has put together one heck of a run this year. Check out this chart: 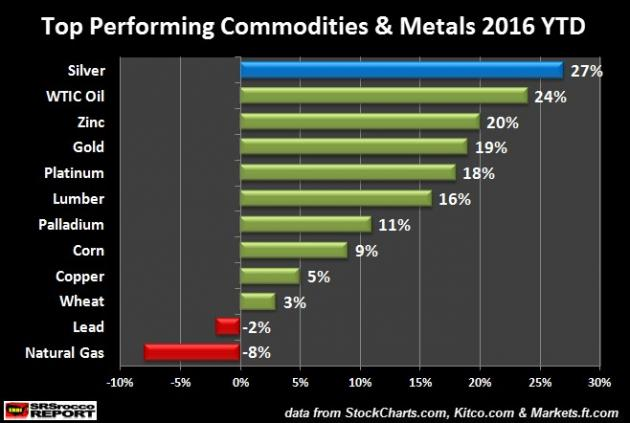 Particularly in the junior resource space, silver stocks have dominated the investing landscape, perfectly exposing the power of leverage and what a reversal in sentiment can do for investors. The mining sector becomes a whole different animal when speculators start connecting the dots and pricing in higher, not lower, precious metal prices. The chart below documents some astonishing silver stock returns thus far in 2016 as investors begin pricing in reserves and future production needs. Again, this can only happen in a rising silver price environment: 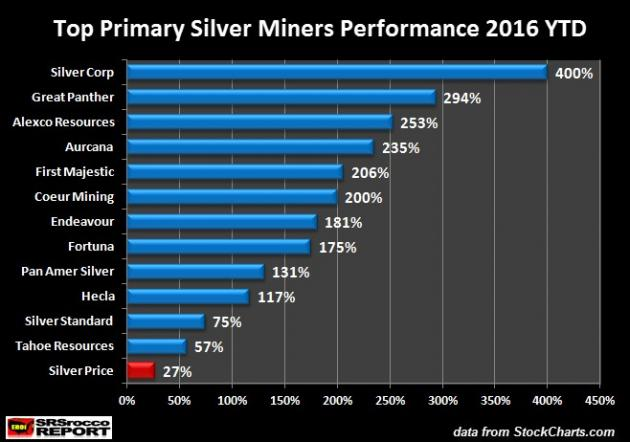 Silver stocks, as with gold stocks, have dramatically outperformed the metals in virtually every single bull market. Of course, this leverage works against silver and gold stocks when precious metals are declining in value, and sentiment turns bearish. Think about the last 5-year bear market and gold’s approximate 40% decline from $1,900 an ounce to about $1,050. During that bear, many juniors lost over 90% of their value. It is this access to leverage that makes investing in gold and silver stocks so enticing. It creates colossal trading opportunities.

On May 3rd, Dana Lyons published an article titled “Smart Money” Has Never Been More Bearish On Silver. Lyons wrote,

While the market for potential buyers of silver, including the global money supply, has grown hugely since 1986, this could prove to be a historic pivot for the metal.

Check out the Commitment of Traders chart below:

One of these bets is going to be wrong. So, will it be the bulls or the bears?

Lyons concluded with two scenarios that don’t provide a whole lot of direction:

“Assuming silver does run into a setback, it will interesting [sic], and telling, to see what form such a setback takes. If the metal is able to consolidate its gains of the past few months by more or less going sideways while the COT extremes are worked off, it may argue for another eventual leg higher in the metal. On the other hand, should the full potential of the unwind of COT extremes come to pass, it could conceivably undermine the 2016 reflation scenario, at least as far as silver is concerned.”

Caveats aside, from a gold to silver ratio, silver remains historically undervalued at today’s price of $17.47.

While speaking to a prominent bullion dealer in Vancouver recently, we asked him if he was buying any gold these days, to which he eloquently replied, “No, I’m buying silver. The ratio is F#%@&*.” Translation: it’s way too high.

This is coming from a guy who has bought and sold many millions of dollars in gold and silver for over 25 years. Take a look at the gold to silver ratio in the weeks that followed our conversation: 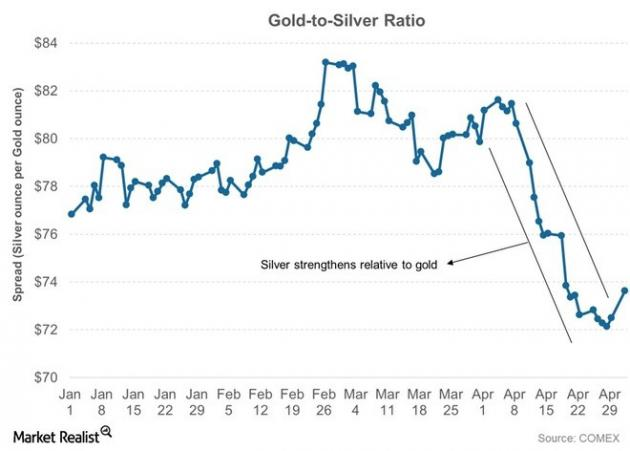 As you can see, after touching a high of 83 to 1 (83 ounces of silver buys 1 ounce of gold) in late February, the ratio is falling. A declining ratio means a rising silver price against gold. Take a look at the ratio on a longer timeline below:

Looking at the above chart, the last time we saw the ratio in the 80s was in 2008. It was almost as high in 2004 and much higher in the early 90s. In each instance, silver proceeded to go on a massive rally. None was greater than after 2008, when silver went from less than $10 an ounce to $48 in under three years. During that time, the gold to silver ratio declined from the low 80s to 32 by the spring of 2011. While the silver ratio has been higher, as can be witnessed by the above chart, if the bulls win out (catalyst being no rate hike by the Fed in June) silver could be set for an epic rally and a much lower ratio…

Gold to Silver Ratio heading for 20:1

These ratios were closely in line with the earth’s crustal ratio of silver to gold, which was thought to be around 17.5:1 in the 1980s. The crustal ratio is now believed to be closer to 20:1, which is why many argue the price should also trade closer to this ratio.

“We’re currently mining on a global basis 10 ounces of silver for every 1 ounce of gold. And that’s a shocking number. So, how can you possibly trade at 80 to 1 and be mining at 10 to 1, that relationship cannot last. I think we’ll see triple digit silver over the next couple of years for sure…”