Profitable silver trades have been few and far between lately as the metal continues to languish below $15 an ounce. Regarding electric vehicles, many investors seem unaware it takes more silver to power electric power vehicles, versus conventional combustion engines. 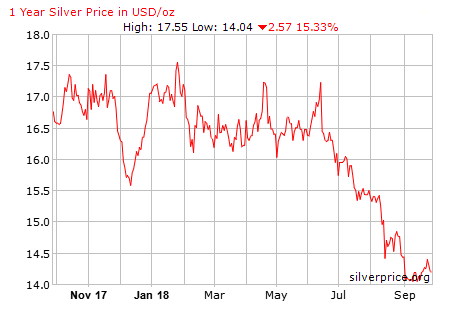 Falling silver prices are hurting miners, including First Majestic – one of Canada’s most well-known junior silver producers focused on Mexico. Shares of the approximate CAD$1.4 billion market cap company crested above $11 in early July before crashing to below $7 in August. Much like the price of silver, its shares have yet to recover much ground.

First Majestic presently owns and operates the San Dimas and Santa Elena Silver/Gold Mines and the four other pure silver mines in Mexico.

In an interview from this morning, the fatigue and frustration of First Majestic CEO, Keith Neumeyer, was on display. In his eyes, silver should be trading much higher, from both a technical and fundamental standpoint. Ups and downs are nothing new in the mining space. Timing the cycles and runs metals go on is pivotal to investing in junior miners.

On the mining sector, Neumeyer stated,

“It’s very cyclical. And we have to be able to move with what’s going on in the marketplace. We were coming into 2016 and 2017 and investing a lot of money in development and exploration; now we’re trying to unwind some of these investments, unfortunately.”

“The miners are only producing 800 million ounces a year. And that’s down two consecutive years now. And, we’re consuming over a billion ounces a year. We’re mining on a worldwide basis for every one ounce of gold, nine ounces of silver. So, how do you trade at 86 to 1 when your mining at 9 to 1. It makes zero sense. So, either gold prices are going to collapse, which I don’t think is going to happen. Or silver prices are going to explode.”

Silver trades are never in short supply as the metal tends to be much more volatile than gold. With the US economy humming and US equities at all-time highs, silver assets are not on the radar of most investors today.