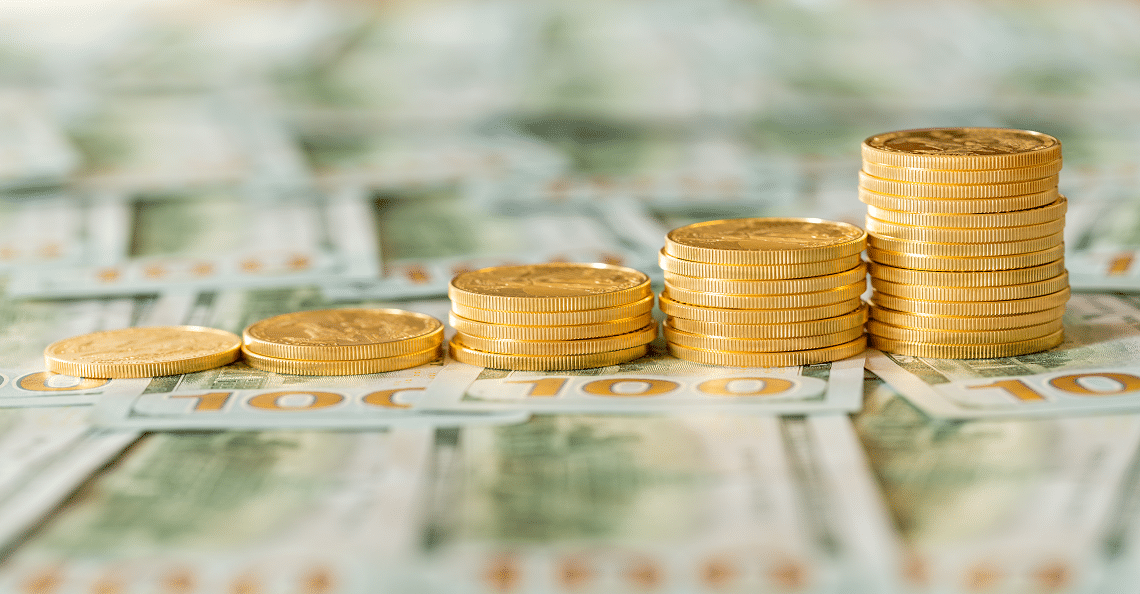 The world’s most famous precious metal rallied to a 7-year high last week – touching as high as $1,649 per ounce on Friday. At the same time, the US Dollar Index is trading near a 17-year high.

Simultaneous strength of the US dollar and gold is a modern day monetary phenomenon.

Spring of 2017 was the last time the US Dollar Index traded in triple-digit territory.

Historically, the US dollar and gold have an inverse relationship. Back in 2011, the dollar fell significantly in the lead up to gold’s high of above $1,900. For some context, the US Dollar Index traded between 74 and 79 for the entire month of September 2011 – when gold managed to hit its all-time high.

Take a look at the chart below and compare the crash landing of the US dollar (blue line) to gold’s rise (red line) between 2002 and 2011. Today, in a bizarre twist, both are historically high.

US Dollar and Gold Rising Together Since 2015

As gold continues to break through record highs alongside a strong dollar, it’s time to take a closer look at what could be driving this unprecedented price action for the precious metal.

Three macroeconomic factors could explain why the price of gold is trending higher in 2020: growing global debt, strong technicals have emerged after a prolonged bear market, and cracks are forming in the US economy.

Record global debt levels is the first, and perhaps most compelling reason, why investors are buying gold. According to CNBC, “global debt surged to a record US$250 trillion in the first half of 2019.”

Although global GDP has expanded alongside rising debt, adding hundreds of trillions in debt in less than 20 years is systemically dangerous.

By far the biggest contributor to worldwide debt is the global government bond market. According to the IFF,

“The bond universe has grown most rapidly in emerging markets, swelling by over $17 trillion to near $28 trillion since 2009.”

Kimberly Amadeo, a writer for thebalance.com, explains the challenges to reducing government debt in the United States,

“Deficit spending is not needed since the recovery of the economy from the Great Recession. Government officials could work instead to create a budget surplus to reduce the national debt burden.

This is not happening, and may not ever happen. Politicians and law-makers would have to reduce spending on popular programs, which would lower their popularity with voters. Politicians who support decreased spending on entitlement programs generally have to find other lines of work.”

On the other hand, and perhaps as a counter to the global debt binge, central banks have accumulated record levels of gold in recent months.

A December 2019 Kitco article titled, Central banks’ appetite for gold expected to continue, explains as much:

“Through the end of October, net official-sector purchases this year totaled 562 metric tons, reported Alistair Hewitt, director of market intelligence with the World Gold Council. That 56.2-tons-a-month average puts sales on pace to roughly match the 656 tons bought in 2018, which were the most central-bank purchases since 1967, according to WGC data.” 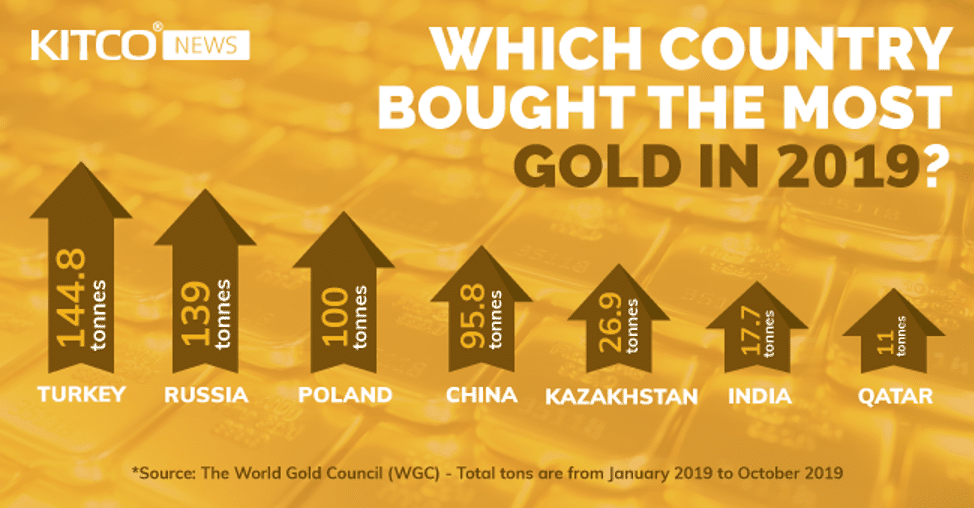 “Central banks accumulated over 668 tons in gold purchases this year, which is more than 2018’s record numbers. In fact, the key drivers in gold demand this year stemmed from central bank purchases, most of which were bought (390 tons) during the first two quarters of 2019.”

The article goes on to note,

“. . .at least 37 developed central banks have participated in significant monetary easing practices like large scale overnight repos and slashing interest rates. Every time one of the banks cuts a nation’s interest rate or fuels the country’s private banks with stimulus, they cite a weak economy, lack of liquidity. . .”

“However, most people don’t know that while central planners are toying with the global economy, they’re also purchasing gold in mass quantity.”

Even if the US economy started growing at 3-4% GDP, politicians would probably still find a way to run deficits. Canada is no exception. With global interest rates so low, the temptation to borrow and spend is too great.

In a debt-based monetary system run amuck, rising deficits have investors turning to the US dollar and gold.

Factor #2: Gold is in a Technical Bull Market

From a technical standpoint, gold has broken out. The precious metal is now trading above all three moving averages (50, 100, and 200 DMA) – a very bullish signal.

What’s more, gold stocks are finally joining the party – the GDXJ is within striking distance of its 2016 high…

If the GDXJ breaks out above its 2016 high, gold stocks could surge in value. Gold stocks almost always outperform the precious metal during bull markets as they hold incredible leverage to gold itself.

Factor #3: Cracks in the US Economy

Although defaults amongst prime rate borrowers remains historically low, subprime auto loans are experiencing record delinquency rates. Just look at the chart below – auto loan delinquencies are now higher today than they were during the 2008 financial crisis.

With US auto loan delinquencies on the rise and some of the United States’ trading partners beginning to fade (i.e. the EU and China), threats to America’s economy are driving gold prices higher.

All Eyes on US Dollar

We are in unusual economic times. The US dollar is strong while the price of gold is rising. This is the first time in modern history that we’ve seen a flight to safety translate into both a strong US dollar and a bull market for gold.

Although a weak euro could provide a partial explanation for the dollar’s strength (the euro is the most heavily weighted currency in the US Dollar Index, making up approximately 58% of the index), it’s not nearly a complete answer.

Instead, we believe the dollar’s concurrent strength with the rising price of gold can be best explained by one thing: major financial players agree that hedging is necessary, but they’re in disagreement about how to hedge.

In other words, the consensus amongst investors is that there’s trouble ahead for the global economy… it’s just a difference of opinion in how to best prepare for it.