Like Amazon and Apple, all of the world’s largest companies end up targeting the mass consumer. Its simple math. The more you can sell to the more people you can sell to equals the most money.

From Caviar to Cheeseburgers: Goldman Sachs?

According to Mike Mayo of Wells Fargo Securities,

“Goldman Sachs is going from caviar to cheeseburgers.”

“For 150 years, Goldman served the most important people in the world. Heads of state. Heads of corporations. Millionaires, billionaires. And now, they’re also serving you the consumer.”

Henry Goldman had the initial idea that took Goldman Sachs to the next level. According to CNBC,

“He developed a revolutionary idea: use a company’s potential earnings. Its ability to generate income in the future to value the company. This became key to the company’s first IPO in 1986: United Cigar. And it would become a model for the future. Including the IPO of Sears Roebuck later that year.”

According to his granddaughter, Julie Breton Fisher,

“He was responsible for the initial underwriting of more than 50 of our country’s most successful publicly owned corporations.”

Goldman’s trading volume has been slipping. Where it used to dominate it is now in the middle of the pack. In fact, according to Mike Mayo of Wells Fargo Securities,

“…the valuation is the lowest that it’s been since they’ve been a public company in a non-crisis environment.” 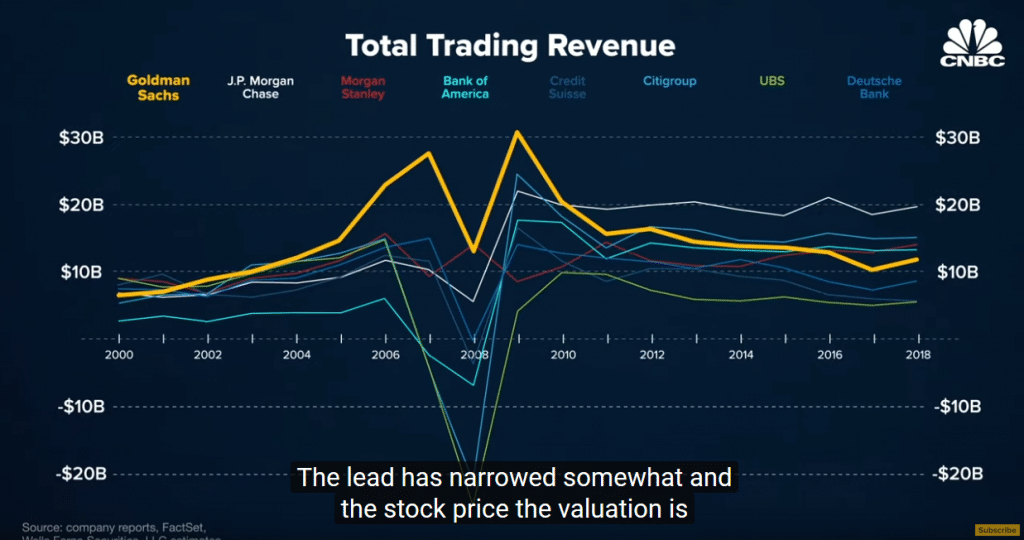 Goldman Sachs Pivots to Consumers with Product ‘Marcus.’ The trend of investment banks starting to look more like commercial banks is intensifying. Goldman is going from Wall Street to Main Street in an attempt to diversify its revenue streams.