Frank Holmes, CEO of U.S. Global Investors, is predicting gold’s rally has just begun. He warns investors that between the Fed and U.S. government, $10 trillion in spending is about to push gold to record high prices. Holmes compares the current pandemic to World War III, but muses negative real interest rates will push gold higher and force people to borrow and spend.

While $10,000 gold may sound like fear-mongering or a crazy forecast, when one looks at the money creation, it becomes far more realistic. Imagine the trillions in new currency and trillions in debt in the system today that did not exist in 2011 when gold hit $1,900 per ounce. One could argue that gold should be many multiples of its 2011 high, given how much new currency is in the system.

“This is going to create unprecedented growth in paper money.”

Holmes warns that short term we may have deflation, but in time, just like after 2008, gold will roar to life.

Frank Holmes goes on to explain that,

“We still have negative real interest rates, and that bodes extremely well for gold.” 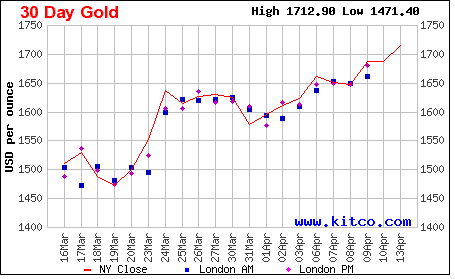 Holmes believes the governments will turn the economy around, but it will come at a cost.

Frank believes airlines will come back far before cruise ships. He notes that typically airlines move 2 million people per day in the United States, and right now, they are only moving 200,000 – a 90% decline. Negative real interest rates typically force people to spend as the value of their currency declines amidst inflation.

Finally, Frank explores different areas of the economy and the lasting impact COVID-19 may have on them. Gold will fluctuate and not go straight up, but as was the case between 2009 and 2011, investors will seek a safe haven amidst record monetary stimulus. Gold is sound money, something the U.S. dollar has not been able to claim for some time.