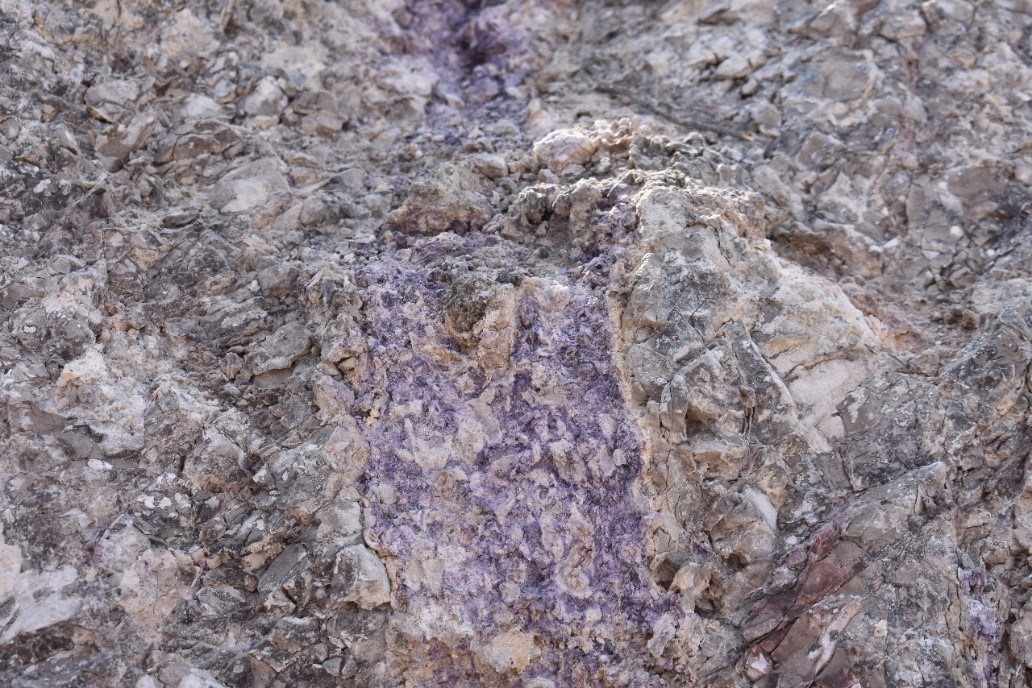 Ares Strategic Mining Inc. (“Ares” or the “Company”) (TSXV:ARS) (OTC:ARSMF) (FRA:N8I1), is pleased to announce the Company has commenced preliminary planning for its second proposed mine site on its consolidated Spor Mountain fluorspar claims area.

The Company has identified the historic Bell Hill mine area as the most suitable site for an advanced mining operation, which is anticipated to operate concurrently with the Lost Sheep mine. The Bell Hill mine area exhibits several unmined fluorspar pipes identified by the USGS which appear at surface and appear to have continuity of fluorspar extending to depth. Exploration drilling will commence in the first quarter of 2021, which will inform an updated mine plan and outline the expanded operation. Sampling from the Bell Hill Claims has demonstrated high-grade fluorspar, further evidencing the uniformity of the high-grade fluorspar exhibited throughout the Spor Mountain range.

Fluorspar’s classification as a Critical Mineral in the United States translates to a faster permitting period, enabling mining operations to initiate more quickly than operations for conventional minerals.

James Walker, President and CEO of the Company said, “We are very fortunate to have so many sites within our claims that offer the potential for further mining operations. The Bell Hill claims demonstrate several tightly located fluorspar pipes, offering an extensive source of feed for processing. Upon initiating operations on the Bell Hill claims the Company will seek to increase its processing and refining capacities to achieve greater outputs of its final fluorspar products.” 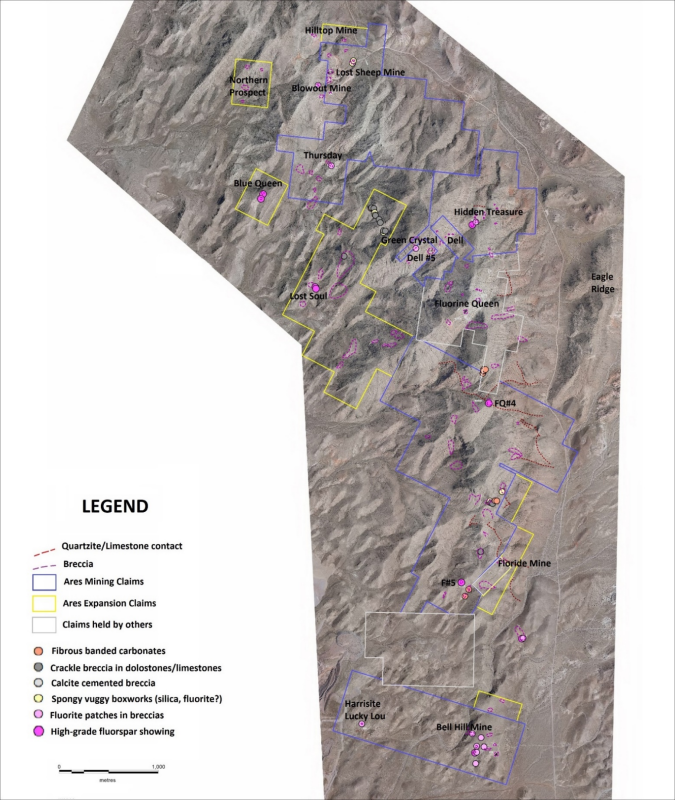 The Bell Hill mining area is the logical next area to be developed in the Spor Mountain Fluorspar District. The old mine works are located at the southernmost tip the range, at the lowest elevation, and most favourable topographic relief. The former past producing mines and prospects are still accessible by a network of well-maintained roads that will require minimal if any work for exploration and delineation purposes.

USGS source indicates the Bell Hill mine area contains two historic orebodies (Pits 1 and 2), 4 smaller deposits and many small veins and stockworks, making it a very prospective zone within the Spor Mountain. Historic surface workings consist of 4 large bulldozer trenches and two open pits (See Figure. 1). Pit 1 is located on the largest fluorspar body and has been partially mined. Pit 2 is smaller and approximately 50% of the historic ore was mined by stopping out large rooms on the various levels leaving pillars to hold up the ceilings.

Four other ore bodies consisting of a vein or several veins have been exposed in trenches 1, 2, 3 and 4. None of these four ore bodies had been worked by the end of 1952 when the USGS report was written. They remain unmined (Figure. 1). Historically it was thought that they are not as large or as high grade as the two large ones mined (M.H.Staatz and F.W.Osterwald, 1959). 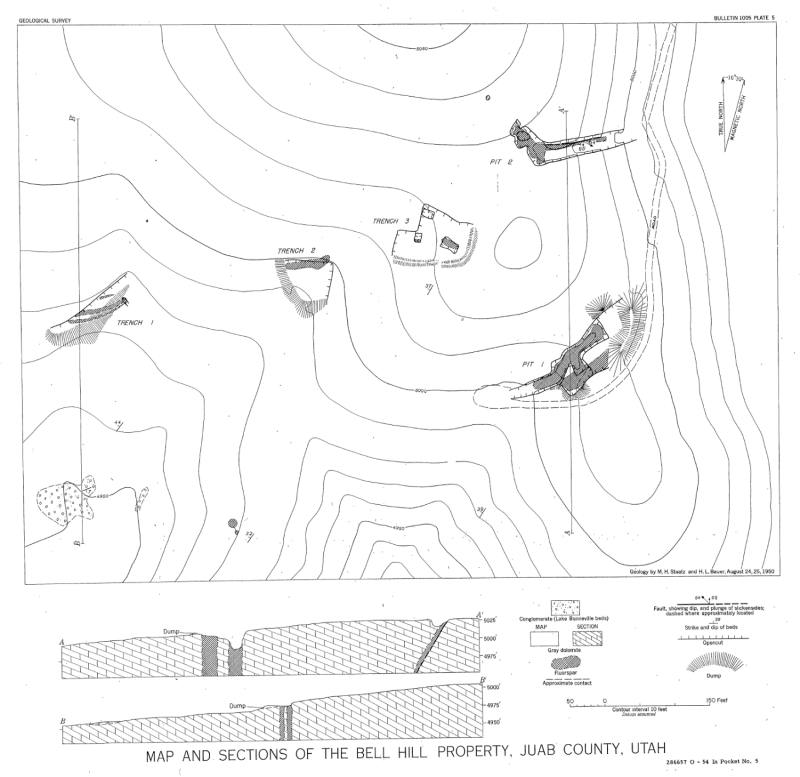 More than 85% of the production from Bell Hill through 1952 came from the large ore body at Pit #1. At surface, this ore body has an “H” shaped outline associated to faults of unknown displacement. At depth the ore body pinched in the center and on the 168-foot level, and two other separate ore bodies were found. It seems that the mine has only reached a depth of 150 feet (50m), with showings and evidence of ore continuing at depth (see Figure 2).

Pit #2 contains an irregular ore body in a fractured zone on the foot wall of the same fault that passes through trench #1. The main part of the orebody is 15m long and 9.5m in maximum width. Brecciation usually preceded replacement of the dolomite by the fluorite, and the brecciated structure was still obvious in some of the ore from the large ore body.

The fact that there is ore left at the bottom of the larger pipes and mineralization at surface exposed in trenches never mined makes this target a priority for delineating orebodies. 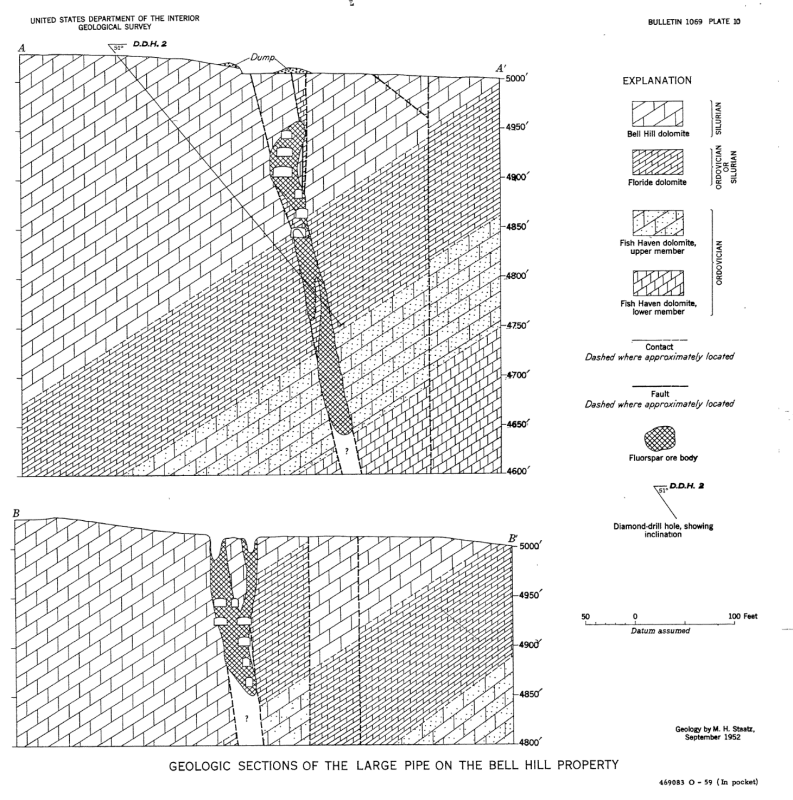 Figure 2. Geologic Sections of the Large Fluorspar Pipe on the Bell Hill (1952). 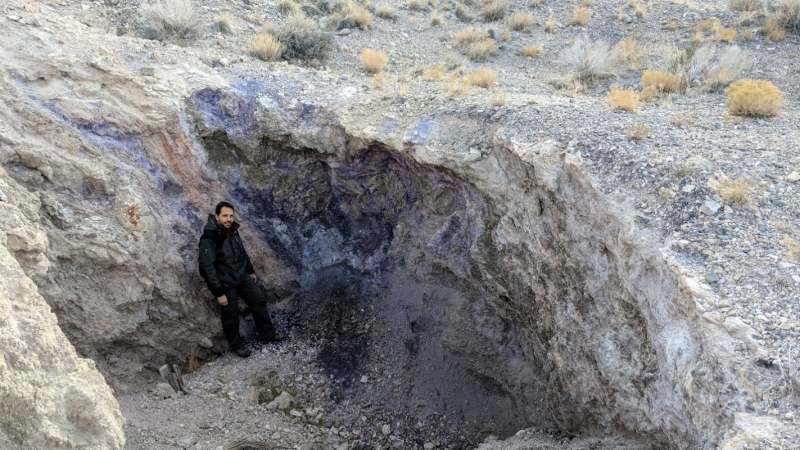 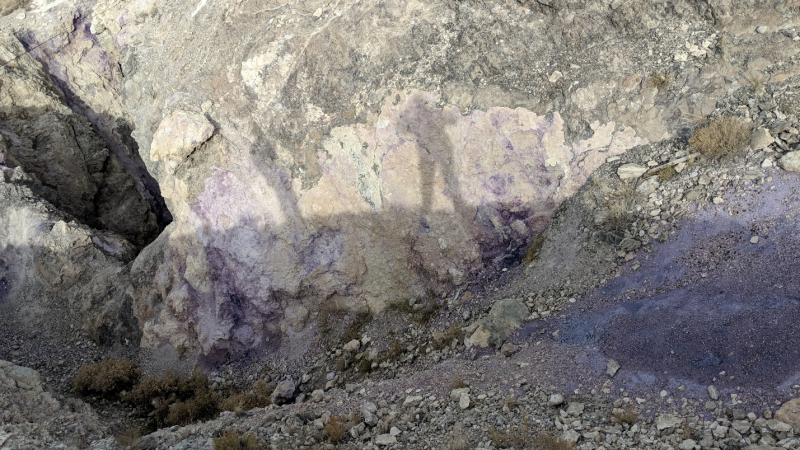 Immediately north of Trench #1 footprints of breccia pipes disrupting the limestone/dolostone host rock are evident in satellite imagery, in this case by a very distinctive yellow halo (see red circled zone in Figure. 5  below). Surface reconnaissance work revealed fluorspar mineralization in a zone of dimensions 30x20m as seen in the images below and even some of them had been trenched to expose mineralization. 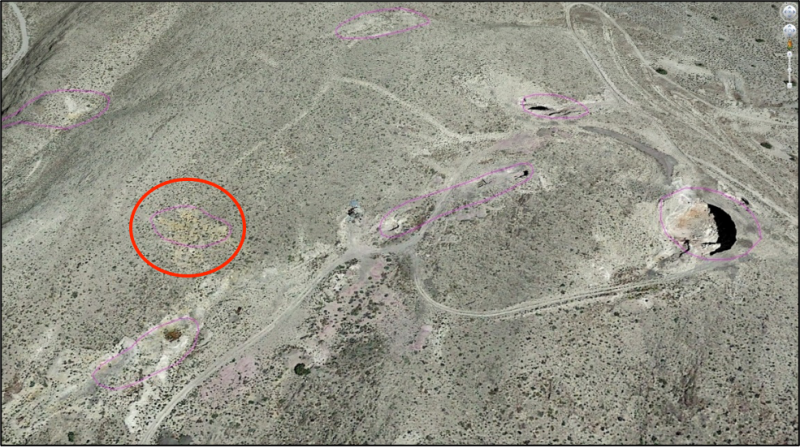