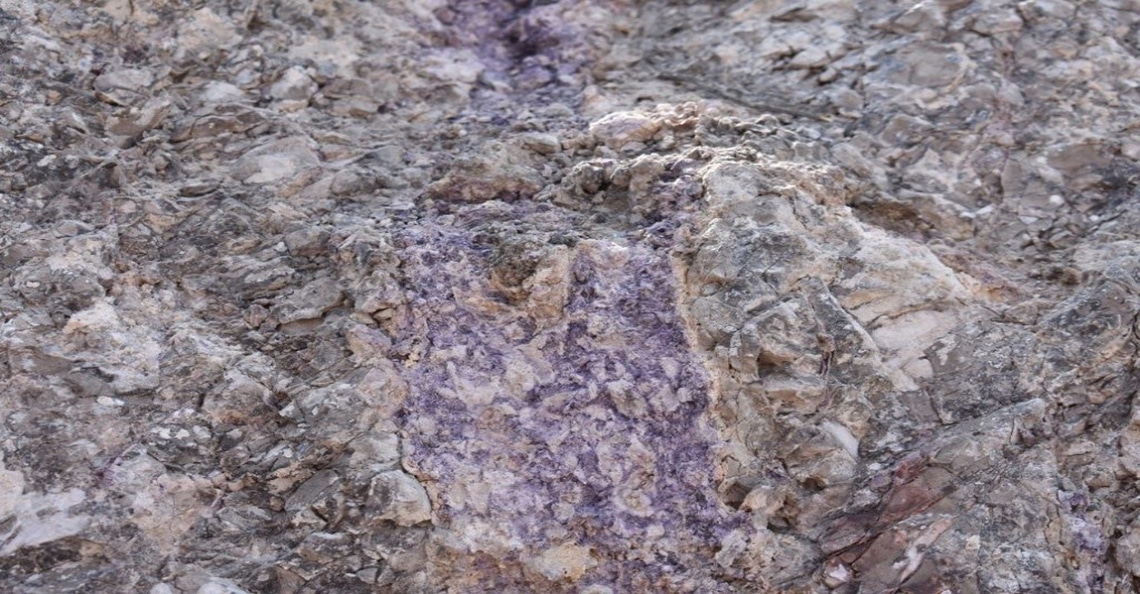 The IP survey on the permitted mining area consisted of 6 lines, each of them 800m long, with dipoles located 25m apart (See Figure 1). The lines were designed to run over known fluorspar locations to identify and define their geophysical signatures, which could then be used to identify new potential targets. Parallel lines were planned away from those to test for potential blind targets. Two orthogonal lines were also planned as tie lines for structure and stratigraphic correlation.

James Walker, President and CEO stated: “Discovering these additional breccia pipes so close to the existing mining targets, gives our planned initial mining operation a huge increase in potential. The identified anomalous zones are close enough to the planned mining operation to be incorporated into the preliminary mine plan, allowing for a single adit with many branches which are capable of being mined concurrently. Additionally, we have now identified a methodology we can apply throughout the entire Spor mountain range to identify new targets for drilling and future operations. The non-contiguous, non-metallic, sub-surface fluorspar mineralization, have remained undiscoverable throughout the Spor Mountain’s century of operation.  Ares now has the means to consistently identify new potential targets, even without obvious geological and visual indications. It is a very promising and exciting find for our Company.” 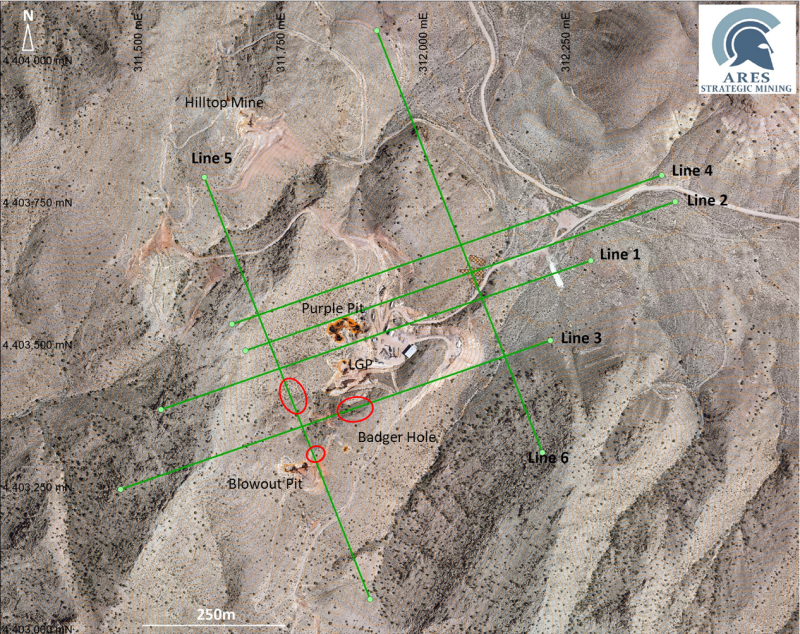 Lines 3 and 5 show clear anomalies that can be correlated with intrusive breccias pipes breaking through the limestone host rocks.

The anomaly in Line 3 (Figures 1, 2, 3 and 4) is 50m long in a ENE-WSW direction and open to a depth of approximately 50m from surface. The anomaly is located right between the known Blowout / Badger Hole known fluorspar pipes and the LGP / Purple Pit fluorspar pipes, suggesting the continuation of an almost linear trend.

Line 5 shows three anomalies (Figures 1, 5, 6 and 7), the smaller clearly related to the down dip projection of the known Blowout Mine (possibly indicating additional non-mined fluorspar mineralization). Under the Badger Hole a thin elongated anomaly may indicate the presence of a narrow pipe, as indicated also by the nature and extent of historic workings. A larger more elongated anomaly extending at depth and to the north at moderate angle to an inferred depth between 75 and 100m is known to correlate at surface where volcanic intrusive breccia and fluorite are also reported and mapped. 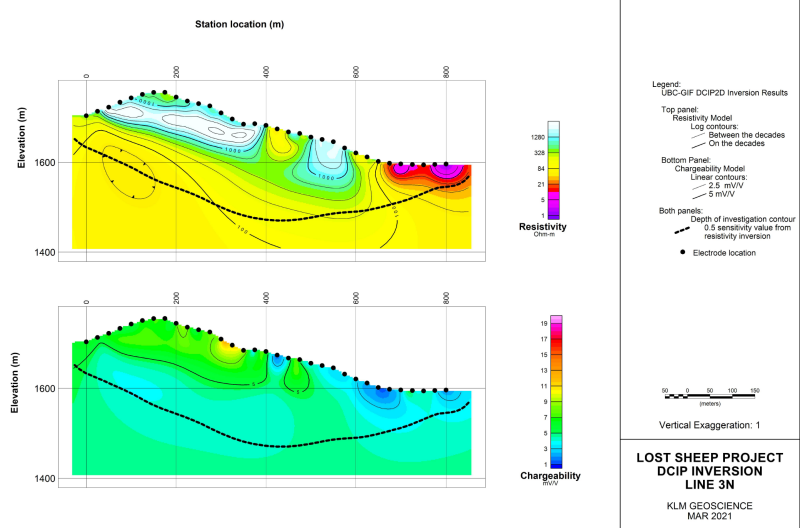 Figure 2. IP section 3 indicating the presence of a disruption of the limestone package likely related with an intrusive breccia pipe (red circled area). 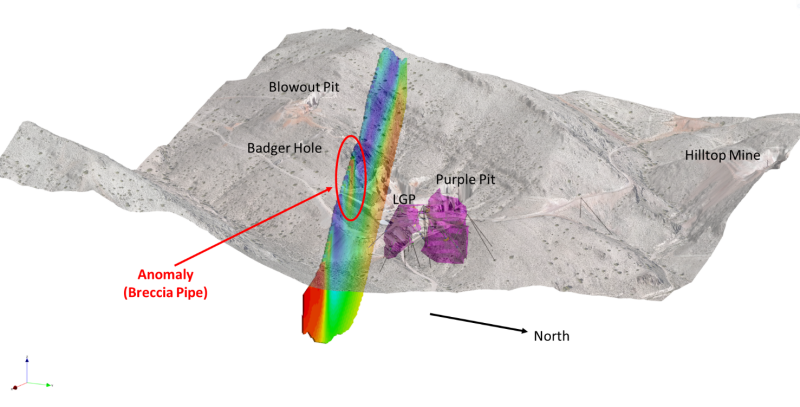 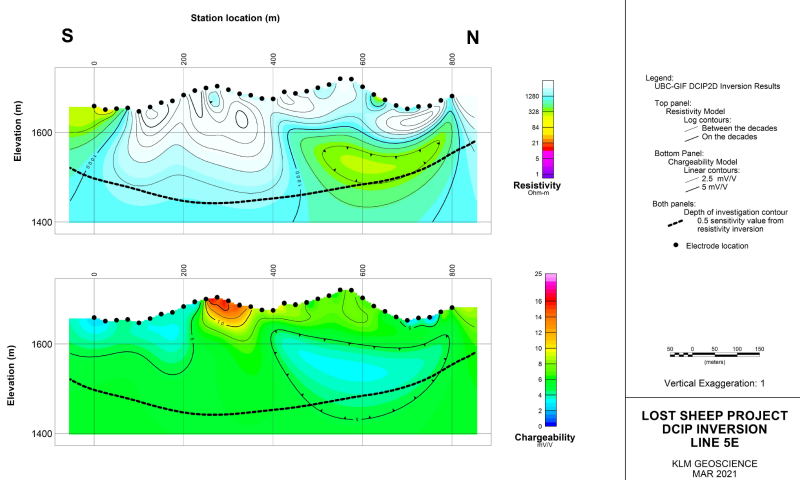 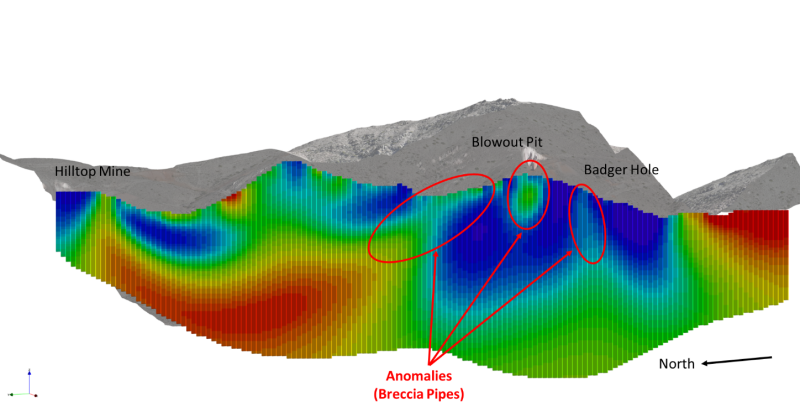 Figure 6. View of IP section 5 looking East from below indicating the presence of the IP anomalies likely related with intrusive breccia pipes (red circled areas) and surrounding known fluorspar bearing breccia pipes. The correlation of the anomalous areas under the Blowout and Badger Hole pits is very evident.