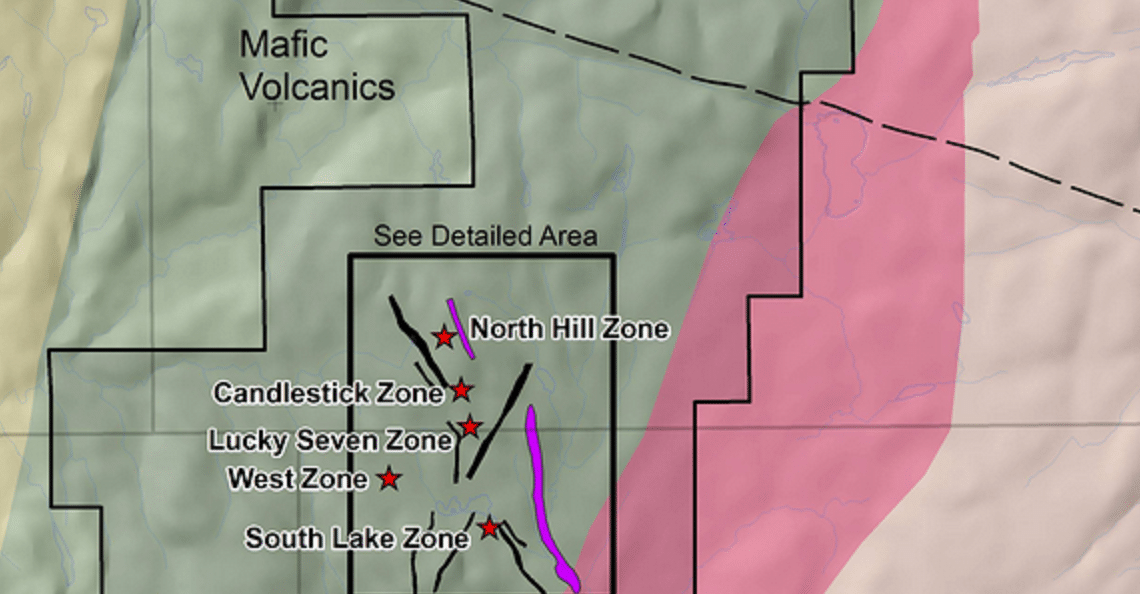 A plan map of the drill hole locations is available at:

A long section of the Candlestick-North Hill Zone is available at:

“We are pleased to report the final drill results from Wire Lake which further demonstrates how expansive this gold system is. Each of these last seven holes contained significant near surface gold values over a great strike length,” said Gordon McKinnon, President and CEO of Canadian Orebodies. “The Company remains very active at Wire Lake and the adjacent Black Raven property, undertaking regional prospecting, mapping and sampling programs which will continue until the field season ends. We look forward to reporting on those results when received as the combined property covers over 180 square kilometres and has seen very limited exploration outside of the Wire Lake Gold Zone.”

1     Readers are cautioned that these assay results are historical in nature and have not been verified by a qualified person on behalf of the company.

WL-2017-017 was collared at the south end of the South Lake Zone where the gold zone was interpreted to have been cut off or displaced by a fault. The hole was collared at -45 degrees and drilled due east until it intersected a significant north-south trending felsic dyke. The hole encountered two zones of low grade gold mineralization: the first was between 150 to 172.9 metres while the second was encountered between 243.3 to 270.5 metres. The upper gold zone was hosted within moderately sheared mafic volcanics with local fault gouge. Rare quartz carbonate veinlets were noted. Up to 3% pyrite occurs as disseminations or within fractures and stringers. While anomalous gold values were returned throughout the zone, the best assay result was 0.8 gpt Au over 4.3 metres (168.6 to 172.9 metres). The lower gold zone was more similar in appearance to that observed in the other holes. Host lithologies displayed the typical moderate to strong biotite alteration with local quartz veinlets and related silicification. Two low-grade intercepts of 0.5 gpt Au over 9.2 metres between (243.3 and 252.5 metres) and 0.6 gpt Au over 4.0 metres between (266.5 and 270.5 metres). The felsic dyke was encountered at 274.8 metres.

Diamond drill holes WL-2017-018 and 019 were drilled from the same setup at dips of -45 and -85 respectively and at an azimuth of 250 degrees. They were drilled to fill a gap between the recent drilling on the North Hill Zone and historic drilling on the Candlestick Zone. Hole WL-2017-018 encountered a narrow zone of silicified and sulphide (3-5% pyrite-pyrrhotite) bearing mafic volcanics which assayed 1.2 gpt Au over 6.4 metres between (15.1 and 21.5 metres). The zone contained abundant quartz stringers and was strongly sheared. In hole WL 2017-019 the zone of mineralization/alteration was considerably more extensive being observed between 22.1 and 59.9 metres. Within this broader zone several post mineralized mafic dykes were intersected most notably between 29.9 and 35.2 metres, 47.3 and 50.3 metres, as well as between 52.0 54.9 metres. The altered mafic volcanics exhibited moderate to strong biotite +/- chlorite alteration, with local sections of quartz-carbonate stringers/veins. Sulphide content (pyrite-pyrrhotite) averaged 1% but locally up to 5% around quartz veins. Assay results returned 1.5 gpt Au over 5.4 metres (22.1 to 27.5 metres), 1.3 gpt Au over 12.8 metres (33.5 to 46.2 metres and 1.8 gpt Au over 3.0 metres (56.9 to 59.0 metres).

Diamond drill holes WL-2017-020 and 021 were also drilled from the same setup at dips of -45 and -85 respectively and at an azimuth of 250 degrees. They were collared to further test the North Hill Zone, in particular in an area around previously reported holes WL-2017-001 to 004 which returned results including: 2.6 gpt Au over 18.7 metres (2.0 gpt Au cut to 31.1 gpt) including a 0.5 metre section containing several small specks of visible gold which assayed 57.1 gpt Au in WL-2017-001; and 1.4 gpt Au over 13.0 metres and 0.8 gpt Au over 28.0 metres (including 1.6 gpt Au over 10.6 metres) in WL-2017-002 (see press release August 21, 2017). From 51.0 metres to 69.0 metres (18.0 metres) hole WL-2017-020 returned 1.4 gpt Au. Host rocks consisted predominantly silicified mafic volcanics exhibiting moderate to strong biotite alteration within more foliated sections and weak to moderate biotite alteration in more massive sections. Abundant centimetre to decameter scale quartz veins and veinlets were noted. Sulphide content ranged from trace to locally 3% pyrite-pyrrhotite. In hole WL-2017-021 the altered gold bearing unit was observed between 67.3 and 99.0 metres (31.7 metres) which graded 1.1 gpt Au. Biotite +/- chlorite alteration was commonly observed, associated with sparse centimetre to decameter quartz veinlets and veins. Sulphide content was generally less than 2% as fine disseminations of pyrite and pyrrhotite. Between 73.7 and 79.45 a post mineral biotitic intrusive was encountered. 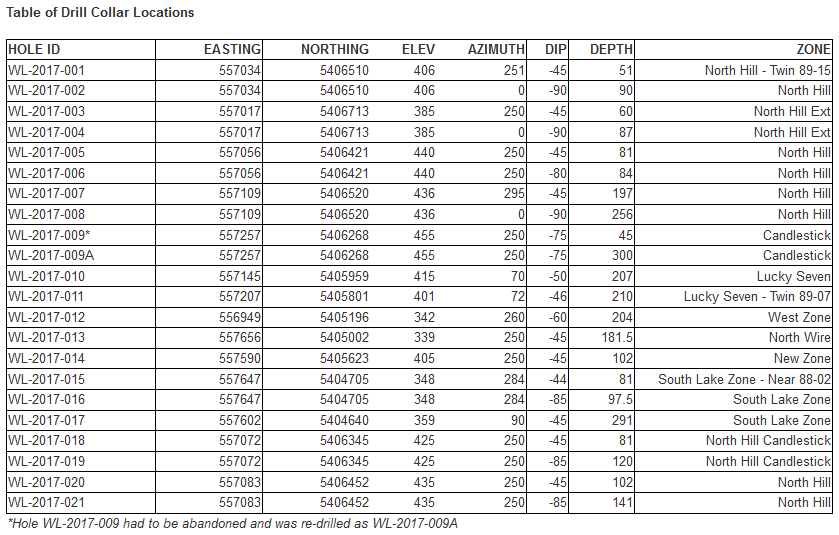 Canadian Orebodies has implemented a quality-control program to comply with best practices in the collection and analysis of rock samples. Samples were transported in security-sealed bags to Activation Laboratories Ltd. in Thunder Bay, ON for preparation and assay.

This press release has been prepared under the supervision of Mr. Bruce Mackie (P.Geo.), who is a consultant to the Company and a “qualified person” (as such term is defined in National Instrument 43-101). Mr. Mackie has verified the technical data disclosed in this press release.

Certain information set forth in this news release may contain forward-looking statements that involve substantial known and unknown risks and uncertainties, including, but not limited to, exploration results, potential mineralization, statements relating to mineral resources, and the Company’s plans with respect to the exploration and development of its properties. These forward-looking statements are subject to numerous risks and uncertainties, certain of which are beyond the control of Canadian Orebodies, including, but not limited to, the impact of general economic conditions, industry conditions, volatility of commodity prices, risks associated with the uncertainty of exploration results and estimates, currency fluctuations, dependency upon regulatory approvals, the uncertainty of obtaining additional financing and exploration risk. Readers are cautioned that the assumptions used in the preparation of such information, although considered reasonable at the time of preparation, may prove to be imprecise and, as such, undue reliance should not be placed on forward-looking statements.