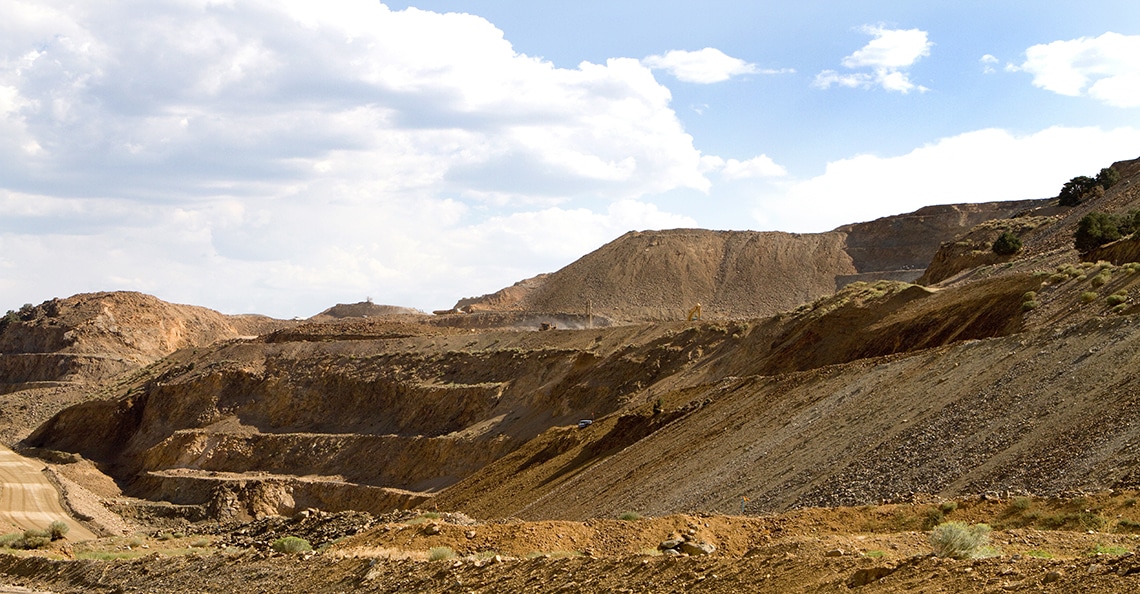 VANCOUVER, BC / ACCESSWIRE / August 12, 2019 / FIORE GOLD LTD. (TSXV:F)(OTCQB:FIOGF) (“Fiore” or the “Company”) is pleased to report that drilling at its Gold Rock project in Nevada has intersected thick intervals of oxide gold mineralization both within and outside of the current resource pit shells. This is particularly encouraging as one of the goals of the current drilling program is to expand the resource envelope in advance of a Preliminary Economic Assessment (“PEA”) targeted for year-end 2019.

Highlights from the first six holes include:

Of particular interest is hole GR19-002, which targeted an area previously evaluated only by scattered, shallow vertical holes under the former EZ Jr. leach pad. Mineralization intersected by current drilling in this area is not included in the current resource pit shells and thus represents potential for expanding the resource. Drilling has confirmed that the mineralized zone follows the western limb of the North trending EZ anticline and is commonly localized in the western limb along the contact between the Chainman Shale and Joana Limestone. Holes GR19-004 and -005 have also identified mineralization within the eastern limb of the EZ anticline, also outside the current resource pit shells.

Tim Warman, Fiore’s CEO stated, “We’ve always suspected that mineralization at Gold Rock continued through the area of historical shallow drilling between the two main resource pit shells, so it’s great to see the drilling confirming this and with considerably higher grades than the current resource grade. We’ll continue to test this area, as well as other targets in and around the existing resource, with the Gold Rock program currently scheduled to wrap up in September. At that point we’ll likely move the RC drill to the Pan Mine to begin a resource and reserve expansion program there.”

Complete results for the current six holes are shown here:

For maps and sections from the current program at Gold Rock, please click here:

Fiore has also added a diamond core rig to the RC rig currently at Gold Rock, with the goal of drilling approximately 10,000 feet (3,000 m) of core over the next few months.

Gold Rock, which is located approximately 8 miles (13 km) southeast of Fiore’s Pan Mine, is one of the only federally-permitted development projects in Nevada, having received its Record of Decision (“ROD”) in late 2018 from the United States Bureau of Land Management (“BLM”) for the construction of a mine, process facilities and other infrastructure.

The scientific and technical information relating to Fiore Gold’s properties contained in this news release was approved by Paul Noland (AIPG CPG-11293), Fiore Gold’s VP Exploration and a “Qualified Person” under National Instrument 43-101. Drill intersections are reported as drilled thicknesses. While drill holes are designed to intersect mineralized structures as nearly as possible to perpendicular, true widths have not been calculated because of some remaining uncertainties in the geologic model that the current drilling program is designed to address. Drill samples were assayed by ALS Limited in Reno, Nevada for gold by Fire Assay of a 30 gram (1 assay ton) charge with an AA finish, or if over 5.0 g/t were re-assayed and completed with a gravimetric finish. For these samples, the gravimetric data were utilized in calculating gold intersections. For any samples assaying over 0.20 ppm an additional cyanide leach analysis is done where the sample is treated with a 0.25% NaCN solution and rolled for an hour. An aliquot of the final leach solution is then centrifuged and analyzed by Atomic Absorption Spectroscopy. QA/QC for all drill samples consists of the insertion and continual monitoring of numerous standards and blanks into the sample stream, and the collection of duplicate samples at random intervals within each batch. Selected holes are also analyzed for a 48 multi-element geochemical suite by ICP-MS. ALS Geochemistry-Reno is ISO 17025:2005 Accredited.

Further details of the current resource estimate at Gold Rock can be found in the report titled “Technical Report on the Gold Rock Project, White Pine County, Nevada, USA.” The Report, which is dated October 25, 2018 and is effective July 31, 2018, was prepared in compliance with National Instrument 43-101 – Standards for Disclosure for Mineral Projects (“NI 43-101”) and is available under Fiore Gold’s profile on SEDAR at www.sedar.com and on the Company’s website at www.fioregold.com. The Report was prepared by Michael B. Dufresne, M.Sc., P.Geol., P.Geo., and Steven J. Nicholls, BA Sc (Geology), MAIG., of APEX Geoscience Ltd., both of whom are “Qualified Persons” as defined in NI 43-101 and independent of the Company.

This news release contains “forward-looking statements” and “forward looking information” (as defined under applicable securities laws), based on management’s best estimates, assumptions and current expectations. Such statements include but are not limited to, statements with respect to the Gold Rock drilling program, expectations and interpretations from drilling results regarding mineralization at Gold Rock, goal to expand the Gold Rock resource, funding sources, expenditures and work plans for metallurgical testing and resource expansion drilling, statements regarding the Gold Rock development program, ability to obtaining state permits for Gold Rock, timing of construction decision at Gold Rock, timing and expectations regarding a Preliminary Economic Assessment (PEA), expectations for a feasibility study Gold Rock, drilling at the Pan Mine, performance of the Pan Mine, goal to become a 150,000-ounce producer, goal to acquire additional production or near production assets, and other statements, estimates or expectations. Often, but not always, these forward-looking statements can be identified by the use of forward-looking terminology such as “expects”, “expected”, “budgeted”, “targets”, “forecasts”, “intends”, “anticipates”, “scheduled”, “estimates”, “aims”, “will”, “believes”, “projects” and similar expressions (including negative variations) which by their nature refer to future events. By their very nature, forward-looking statements are subject to numerous risks and uncertainties, some of which are beyond Fiore Gold’s control. These statements should not be read as guarantees of future performance or results. Forward looking statements are based on the opinions and estimates of management at the date the statements are made, as well as a number of assumptions made by, and information currently available to, the Company concerning, among other things, anticipated geological formations, potential mineralization, future plans for exploration and/or development, potential future production, ability to obtain permits for future operations, drilling exposure, and exploration budgets and timing of expenditures, all of which involve known and unknown risks, uncertainties and other factors which may cause the actual results, performance or achievement of Fiore Gold to be materially different from any future results, performance or achievements expressed or implied by such forward-looking statements. Factors that could cause actual results to vary materially from results anticipated by such forward looking statements include, but not limited to, risks related to the Pan Mine performance, risks related to the company’s limited operating history; risks related to international operations; risks related to general economic conditions, actual results of current or future exploration activities, unanticipated reclamation expenses; changes in project parameters as plans continue to be refined; fluctuations in prices of metals including gold; fluctuations in foreign currency exchange rates; increases in market prices of mining consumables; possible variations in ore reserves, grade or recovery rates; uncertainties involved in the interpretation of drilling results, test results and the estimation of gold resources and reserves; failure of plant, equipment or processes to operate as anticipated; the possibility that capital and operating costs may be higher than currently estimated; the possibility of cost overruns or unanticipated expenses in the work programs; availability of financing; accidents, labour disputes, title disputes, claims and limitations on insurance coverage and other risks of the mining industry; delays in the completion of exploration, development or construction activities; the possibility that required permits may subject to legal challenges, not be renewed, or not be obtained oin a timely manner or at all; changes in national and local government regulation of mining operations, tax rules and regulations, and political and economic developments in countries in which Fiore Gold operates, and other factors identified in Fiore Gold’s filing with Canadian under its profile at www.sedar.com respecting the risks affecting Fiore and its business. Although Fiore has attempted to identify important factors that could cause actual results to differ materially from those contained in forward-looking statements, there may be other factors that cause results not to be as anticipated, estimated or intended. There can be no assurance that such statements will prove to be accurate, as actual results and future events could differ materially from those anticipated in such statements. The forward-looking statements and forward-looking information are made as of the date hereof and are qualified in their entirety by this cautionary statement. Fiore disclaims any obligation to revise or update any such factors or to publicly announce the result of any revisions to any of the forward-looking statements or forward-looking information contained herein to reflect future results, events or developments, except as require by law. Accordingly, readers should not place undue reliance on forward-looking statements and information.