Trillium Gold Mines Inc. (TSXV:TGM) (OTCQB: TGLDF) (FRA: 0702) (“Trillium” or the “Company”) is pleased to provide an update on the drill program underway on the 100%-owned Rivard property, located at the southwest portion of the Newman Todd project. The Newman Todd Zone (NT Zone) is currently a 2.2 km long and up to 200 metre wide structural target which is situated in the Red Lake Gold Camp. Seven holes have so far been completed for 3,484 metres since the start of the drilling in early 2021.

The drilling on the Rivard property is expected to expand the understanding of the continuity of the high-grade veining both along strike and at depth on Rivard and into the Newman Todd Structure, where previous shallow trenching revealed spectacular visible gold (VG) (Figure 1) and the structural influence on higher-grade intersections in the NT Zone.

Three holes tested the southwest extension of the NT Zone while four holes began testing the lateral and depth continuity of the high-grade veining as seen on surface and in the historical trenches (Figure 1). With the early onset of thawing spring temperatures, combined with a backlog in analyses, results from only two holes have been received to date (Table 1). Drill sections are included below as Figures 5 to 9. 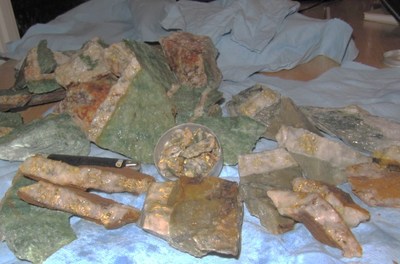 RV21-25 was drilled at the far southwestern extension of the NT Zone but did not hit the NT Zone breccias as historically mapped on surface 200- 300m to the northeast. The interpretation is that the NT Zone does not continue to depth in this area or there is a structural offset to the south. The rocks encountered in the hole were mainly massive to weakly foliated felsic tuffs with minor carbonate veining up to 20cm. The best assay was 0.45m @ 2.75 g/t Au.

Hole RV21-26 collared in NT Zone breccia and drilled through 137.8 metres of this with a second NT Zone horizon encountered from 342.6 to 484.7 metres. The upper NT Zone unit was a previously unknown horizon. Hole RV21-27 was located 50 metres back to obtain a full intersection of this new northern band of the NT Zone. It intersected this horizon from 160.5 metres to 435.4 metres. The southern band was intersected from 459.3 to 481.4 metres. Both NT Zone horizons contained varying sub-units of silicified, sulphidized and magnetite-bearing breccias. Closer inspection of the bottom of RV21-27 revealed sulphidized and brecciated sections in the felsic tuffs warranting continuation of this hole at a later date.

Four holes (RV21-24, RV21-28 to RV21-30) have been completed, testing the orientation and continuity of the high-grade veining in the central portion of the Rivard property. All the holes were designed to test under and along strike of the historical trenching. Lithology units encountered comprised mainly of quartz- and quartz-feldspar porphyry with varying amounts of altered ultramafic rocks. Numerous occurrences of VG have been noted in the logging (Figure 3) with specks and blebs of VG mineralization contained in 0.5 to 5cm quartz veins intruding all lithological units. VG was noted in: 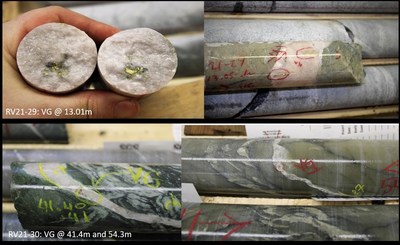 Bill Paterson , Head of Exploration at Trillium Gold states: “Our first few holes on the Rivard property testing both the southwest extension of the NT Zone and under the historical trenches with the high-grade veining have already been a success. Even with most assays yet to be received, we have seen VG in a number of quartz veins associated with the trenches and have intersected a possible parallel or structural enhancement to the NT Zone in the southwest”.

Prior drilling on the NT Zone from 2013 and earlier had mostly focused on testing the Zone by targeting the footwall with drilling toward the southeast, now known to be sub-parallel to gold mineralized veining and structures, potentially missing high-grade intersections or undercutting much of the targeted zone. Newman Todd is a highly prospective target with 41% of the 165 historic drill holes having intervals of greater than 20 g/t gold over various lengths. In addition, nearly all drilling has been conducted to depths of less than 400 metres.

The Red Lake Camp is famously known for high grade gold mineralization at depth, with Evolution Mining’s Red Lake Gold Mine currently reaching depths of several thousand feet. Trillium will continue to test various drill orientations in order to develop a comprehensive understanding of the mineralization and structural controls and test the depth potential of the NT Zone. Figure 4 below shows the location of the Newman Todd Project as well as its relative location to the nearby past producing mines within the Red Lake Camp. All drilling was supervised by Paul Barc , PGeo. The drilling was conducted by Rodren Drilling Ltd., of West St. Paul, Manitoba . Drill core was logged and sampled in a secure core facility on site. Core samples from the program were cut in half, using a diamond cutting saw, and half cores were sent for analysis to the SGS Laboratory in Red Lake, ON , an accredited mineral analysis laboratory. All samples were analyzed for gold using standard Fire Assay-AA techniques. Samples returning over 10.0 g/t gold were analyzed utilizing standard Fire Assay-Gravimetric methods. Duplicate assays of approximately 5% of the samples were also obtained from the coarse reject of the original sample. Selected samples with results greater than one ounce per ton gold were also analyzed with a standard 1 kg metallic screen fire assay. Certified gold reference standards and blanks are routinely inserted into the sample stream, as part of Trillium Gold’s quality control/quality assurance program (QAQC) to monitor accuracy and precision. No QAQC issues were noted with the results reported herein. All drill intercepts reported are down-hole core lengths, which does not necessarily represent true widths.

The technical information presented in this news release has been reviewed and approved by William Paterson QP, PGeo, VP of Exploration of Trillium Gold Mines, as defined by NI 43-101.

About Trillium Gold Mines Inc.
Trillium Gold Mines Inc. is a growth focused British Columbia based company engaged in the business of acquisition, exploration and development of mineral properties located in the Red Lake Mining District of Northern Ontario . The Company recently extended its holdings in the Confederation Lake and Birch-Uchi greenstone belts, as well as in highly prospective properties in Larder Lake, Ontario and the Matagami and Chibougamou areas of Quebec . 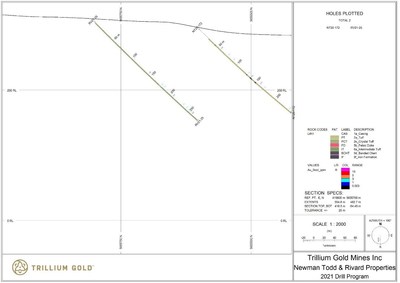 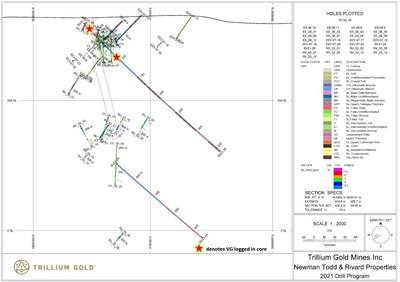 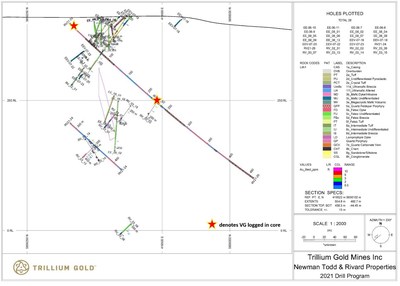 Trillium Gold Mines Inc. is a client and sponsor of PinnacleDigest.com.