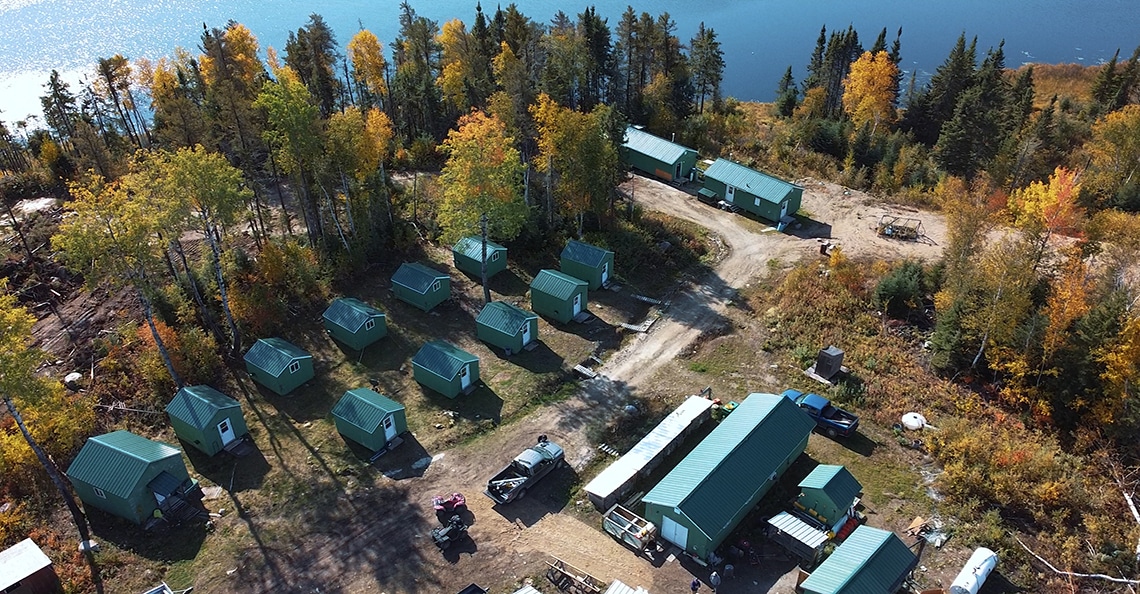 “Drilling at Newman Todd continues to deliver gold even as we step towards the northern boundary. These results have aided us significantly in our reinterpretation of the structures controlling mineralization within the NT Zone and have helped with the new modeling, which is directing our current drilling,” states Bill Paterson , Trillium Gold’s Vice President of Exploration.

Russell Starr , CEO of Trillium Gold comments, “The 2020 drilling can be considered a success in that it has returned significant high-grade gold results as well as validating our understanding of the NT Zone, and has laid the foundation for future drilling to target the structural and veining controls.  With the geological team possessing over 150 years of Red Lake exploration and development experience, combined with drilling targeting structural and veining controls of the high-grade mineralization, we are well on the way to delivering a much more robust exploration model that will positively impact the importance of the NT Zone as an open pit amenable deposit.” 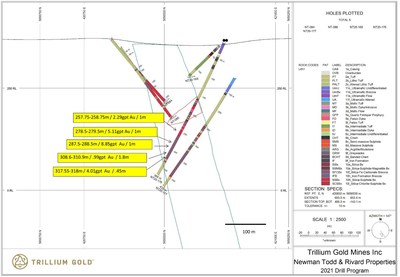 Hole NT20-178 targeted the NT Zone corridor in the northeast area of the property, looking to expand on previously modeled mineralized sections in the 150- 250m downhole interval, and extend mineralization in the 350- 400m interval, while testing an iron formation unit in the toe portion of the hole. In the interval from 451- 523.5m , the hole intersected sulfide mineralized iron formation breccia and NT Zone silica-carbonate breccia sections on the hanging wall margin of the NT Zone corridor. 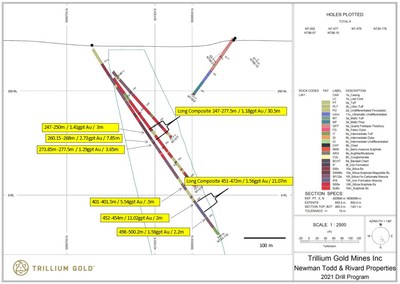 This hole is expected to expand historical resources in the upper section of the hole, as the assay results received within the interval from 247–277.5m include 3 intervals with significant composite assay intervals, with a long composite assay of 1.18 g/t Au over 30.5m . In the lower portion of this hole, mineralization was intersected 50- 70m below previous results, expanding this zone, with 12 intervals of significant assay composites received, including a long composite from 451- 472m that intersected 1.56 g/t Au over 21.07m . 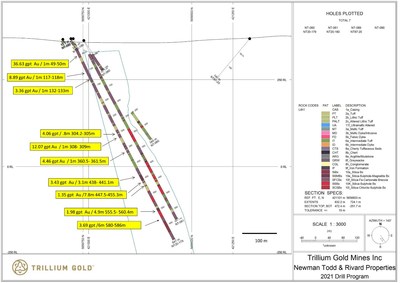 Drill hole NT20-180 was designed to target the NT Zone corridor, again, along the northeast boundary of the property, and was planned to intersect previously modeled mineralization from 50- 100m and extend mineralization in the lower portion of the hole and to infill a 100m wide gap in the drilling. 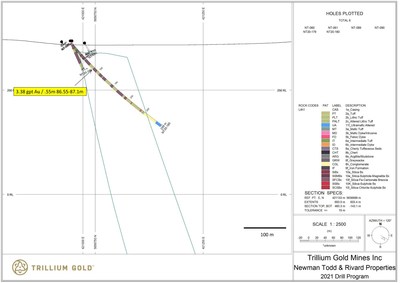 New significant assay composite results are compiled in Table 1. For a complete listing of the previously released significant results from the 2020 drilling program, please refer to the press releases dated October 6, 2020 , October 28, 2020 and January 12, 2021 . 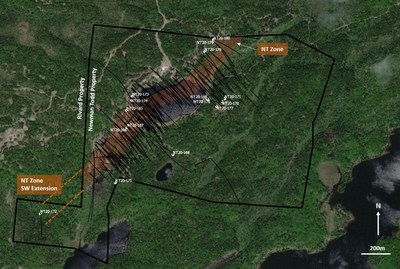 Prior drilling on the NT Zone from 2013 and earlier had mostly focused on testing the Zone by targeting the footwall with drilling toward the southeast, now known to be sub-parallel to gold mineralized veining and structures, potentially missing high-grade intersections or undercutting much of the targeted zone. Newman Todd is a highly prospective target with 41% of the 165 historic drill holes having intervals of greater than 20 g/t gold over various lengths. In addition, nearly all drilling has been conducted to depths of less than 400 metres.

The Red Lake Camp is famously known for high grade gold mineralization at depth, with Evolution Mining’s Red Lake Gold Mine currently reaching depths of several thousand feet. Trillium will continue to test various drill orientations in order to develop a comprehensive understanding of the mineralization and structural controls and test the depth potential of the Newman Todd Zone . Figure 6 below shows the location of the Newman Todd Project as well as its relative location to the nearby past producing mines within the Red Lake Camp. 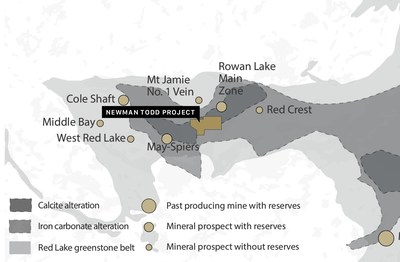 All drilling was supervised by Paul Barc , PGeo. The drilling was conducted by Rodren Drilling Ltd., of West St. Paul, Manitoba . Drill core was logged and sampled in a secure core facility on site. Core samples from the program were cut in half, using a diamond cutting saw, and half cores were sent for analysis to the SGS Laboratory in Red Lake, ON , an accredited mineral analysis laboratory. All samples were analysed for gold using standard Fire Assay-AA techniques. Samples returning over 10.0 g/t gold were analysed utilizing standard Fire Assay-Gravimetric methods. Duplicate assays of approximately 5% of the samples were also obtained from the coarse reject of the original sample. Selected samples with results greater than one ounce per ton gold were also analyzed with a standard 1 kg metallic screen fire assay.

Certified gold reference standards and blanks are routinely inserted into the sample stream, as part of Trillium Gold’s quality control/quality assurance program (QAQC) to monitor accuracy and precision. No QAQC issues were noted with the results reported herein. All drill intercepts reported are down-hole core lengths, which does not necessarily represent true widths.

The technical information presented in this news release has been reviewed and approved by William Paterson QP, PGeo, VP of Exploration of Trillium Gold Mines., as defined by NI 43-101.

About Trillium Gold Mines Inc.
Trillium Gold Mines Inc. is a growth focused British Columbia based company engaged in the business of acquisition, exploration and development of mineral properties located in the Red Lake Mining District of Northern Ontario . The Company recently extended its holdings in the Confederation Lake and Birch-Uchi greenstone belts, as well as in highly prospective properties in Larder Lake, Ontario and the Matagami and Chibougamou areas of Quebec .

Trillium Gold Mines Inc. is a client and sponsor of PinnacleDigest.com.