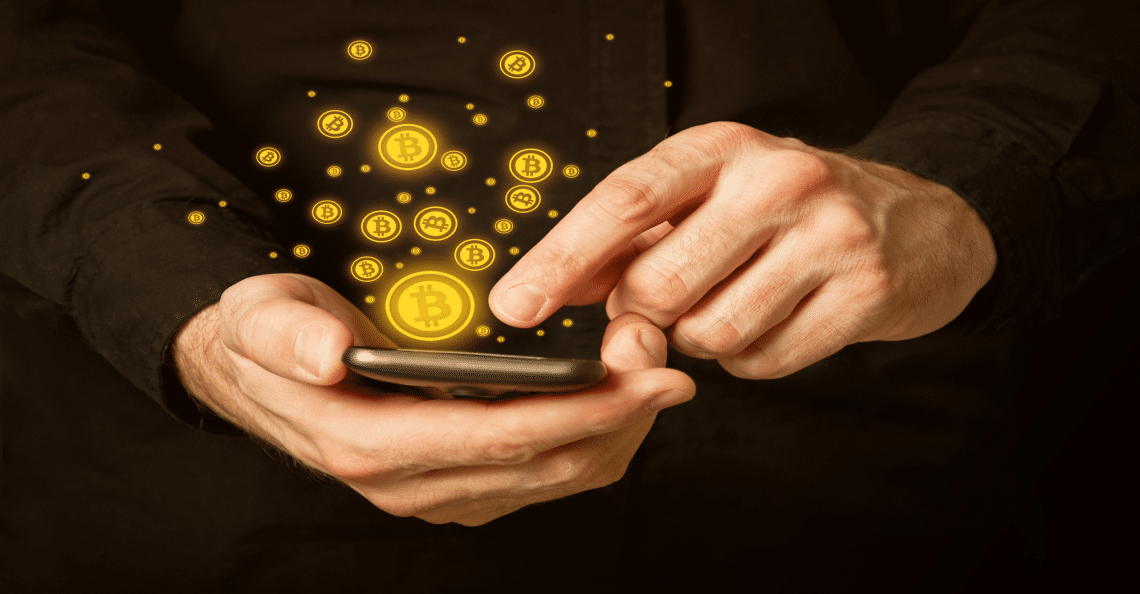 Bitcoin rose through the stratosphere this week… it crested above $16,000. Stories of former yoga instructors, basement tinkerers and the Winklevoss twins’ making fortunes from the cryptocurrency hit the headlines. To further fan the flames of speculator hysteria, media outlets reported there are an estimated 200 bitcoin billionaires in the world today…

This epic run has become a self-fulfilling prophecy. Many ‘investors’ just jumping into the crypto market for the first time this past week likely can’t even articulate what a cryptocurrency (or blockchain) is… we’ve hit crazy hysteria.

Is Bitcoin a Bubble?

The world’s favourite cryptocurrency, Bitcoin, closed trading this past week around $15,500. While its run has been impressive (putting it mildly), quick 100% moves are common in TSX Venture investing, as we all know. And it’s worth noting early in this report that the TSX Venture will likely be a world leader in startup Bitcoin and blockchain-related issuers. More on this shortly.

When looked at over a period of years since we first wrote about the Bitcoin opportunity in 2014, it is up roughly 2,000%. With such a run comes many sceptics and naysayers. Mainstream media outlets and some legacy money managers call Bitcoin a fake currency backed by nothing; and that it is a bubble ready to burst. But they may be overlooking something very important…

Bitcoin is the first decentralized cryptocurrency which uses peer-to-peer technology to operate with no central authority or banks. The magic, and brilliant technology behind Bitcoin and other cryptos is known as the blockchain. In simple terms, it is arguably the world’s most trusted communal ledger. Not perfect, of course, as there have been (and will be more) instances of ‘forks,’ hacks, and computing failures, but blockchain is becoming a trusted source of tracking. That’s important to remember. At their core, blockchain, and cryptocurrencies, live and die based on trust.

Bitcoin appeals to a variety of people for many reasons. However, independent, forward-thinking speculators, a handful of billionaires and a few million millennials can only push an asset so high…

Bitcoin | A Story of Capital Flows

A new class of investor is preparing to unleash billions into cryptocurrencies; and we believe this may lead to a more stable and higher price for several cryptos, current and new, state-owned and independent.

China Is Developing its Own Digital Currency

How Switzerland Reinvented Itself As Cryptocurrency Haven

Venezuela to Create a Cryptocurrency Amid Bolivar’s Free Fall

Kazakhstan plans to launch its own cryptocurrency

Russia may soon issue its own official blockchain-based currency, the CryptoRuble

Bitcoin is making inroads with institutions which previously had no interest in the cryptocurrency even a few months ago. There are more than 100 funds looking to provide exposure for their clients to cryptos, all created in the past year!

In short, Bitcoin is transitioning from a financial novelty trading on the outskirts of the global markets, to a more mainstream, sought-after currency. CME Group, the world’s largest exchange owner, reported on December 1st that it would offer Bitcoin futures contracts. They will begin trading on December 17th. The contracts will be subject to oversight by the Commodity Futures Trading Commission.

Long story short, the institutions (also commonly referred to as ‘smart money’), want in the crypto market. High-frequency trading and algo-bots are perfectly suited to capitalize on the incredible volatility Bitcoin provides on almost a daily basis.

It’s little surprise professional capital wants exposure or diversification to Bitcoin. When compared to conventional, inflationary, fiat currencies, it’s easy to see why FX traders (participants of the largest, most liquid market on earth) are starting to partake in the crypto market…

A new ocean of capital will have a profound impact on Bitcoin and other cryptos. 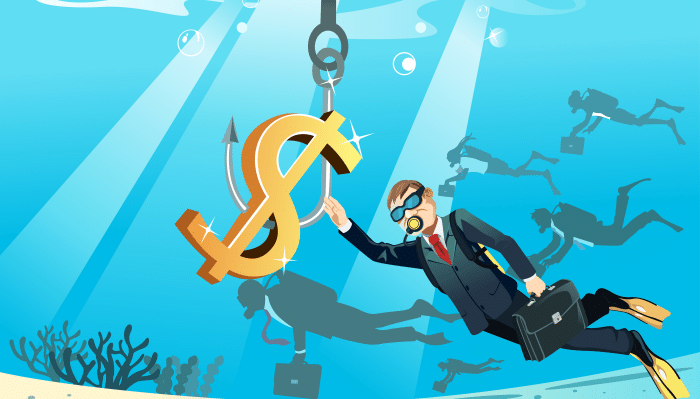 While investors and pundits focus on hitting the next price target for Bitcoin, we pay close attention to causation. In other words, is the thesis used to argue for higher prices coming to fruition?

Capital Flows | Every Bubble Needs Them

Charles Hugh Smith of OfTwoMinds.com predicted Bitcoin was heading to $17,000 last May, when it traded for just $580. He explains his prediction and the method used to get to $17,000:

“The basis of this admittedly crazy forecast was simple: capital flows. There is around $300 trillion in financial “wealth” sloshing around the global economy and another $200 trillion in real estate. (The sum of financial wealth is now much higher, due to the extraordinary gains in global markets.) I reckoned that if a tiny slice of that financial wealth flowed into bitcoin–1/10th of 1%– the inflow of capital would push bitcoin to around $17,000 per coin.”

“If 1% of all that wealth sloshing around looking for yield and safety decided to find a home in bitcoin, the forecasted price was an insane $170,000.”

The basis of Smith’s prediction stems from capital flows. And, as of late-November/early December, we have reason to believe capital flows into Bitcoin are about to increase in a very big way…

Joseph Young, who writes regularly for cointelegraph.com, and whose slogan is ‘future of money,’ published Coinbase Custody Targets $10 Billion in Institutional Funds for Bitcoin Investment on November 18th.

Coinbase CEO Brian Armstrong made a stunning prediction in November that Bitcoin’s market cap (currently near $300 billion) could increase by $100 billion in the not so distant future. He was right. San Francisco’s Coinbase is one of the world’s largest and most prominent Bitcoin trading platforms with operations in over 30 countries.

“Over 100 hedge funds have been created in the past year exclusively to trade digital currency. An even greater number of traditional institutional investors are starting to look at trading digital assets (including family offices, sovereign wealth funds, traditional hedge funds, and more). By some estimates, there is $10B of institutional money waiting on the sidelines to invest in digital currency today.”

Armstrong went on to explain the crux of the situation for institutions:

“When we speak with these institutions, they tell us that the number one thing preventing them from getting started is the existence of a digital asset custodian that they can trust to store client funds securely.”

“The debate has shifted from the legitimacy of the ‘fiat of the Internet’ to how fast new entrants are raising funds.”

Why do many investors buy Swiss Francs yet shun the Indian rupee or Turkish lira? Trust.

Support for a wide range of digital assets and currencies

Insurance (in some cases)

And high levels of cyber and physical security”

“According to Armstrong, Coinbase currently holds $9 billion in user funds in various cryptocurrencies including Bitcoin. Coinbase Custody is exclusively for institutional investors with at least $10 mln on deposit. There is a $100,000 initial setup fee and a fee of 10 basis points per month on all deposits stored on the Coinbase Custody platform.”

While $10 billion represents far less than Bitcoin’s nearly $300 billion market cap, it is a sign of more money to come. The institutional floodgates are opening.

British hedge fund Man Group has over $100 billion in funds under management. In November, the fund announced it would begin trading Bitcoin once CME’s futures market is launched. We know now that day will arrive on December 17th.

“We’re always listening to our customers and we’ve found that they are interested in using the Cash App to buy Bitcoin. We’re exploring how Square can make this experience faster and easier, and have rolled out this feature to a small number of Cash App customers. We believe cryptocurrency can greatly impact the ability of individuals to participate in the global financial system and we’re excited to learn more here.”

Back to Coinbase for a sec…

Coinbase has a ways to go before earning the global trust it seeks. Not only for itself, but for Bitcoin and other cryptos. Besides the stomach-turning volatility in cryptos, Coinbase has a history of short-circuiting at inopportune moments.

Crypto Coin News reported, “In May, Coinbase pointed to “unprecedented traffic and trading volume” leading to multiple outages in a week when bitcoin surged to a then-all-time-high of $2,740.”

November 29th once again brought new all-time highs, and another Coinbase outage amidst a trading frenzy… 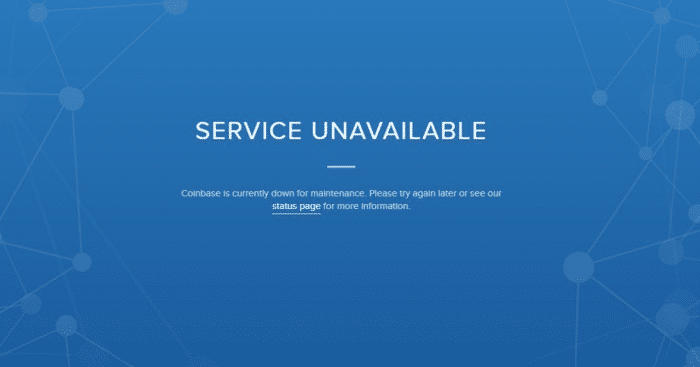 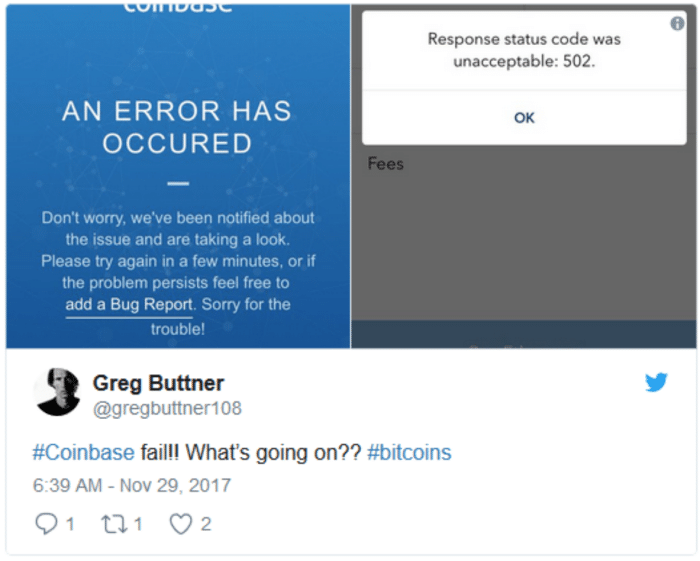 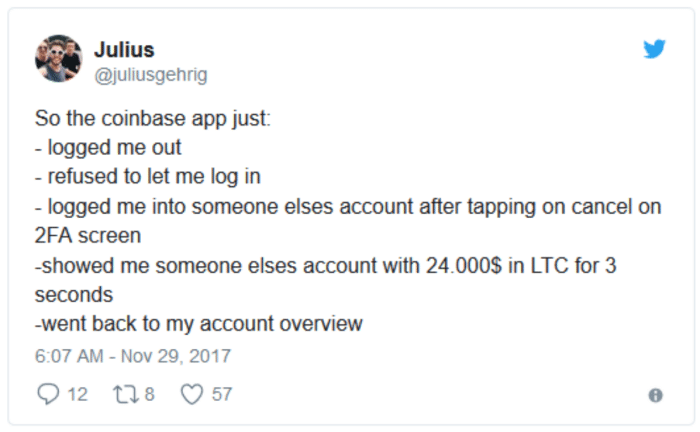 Despite the (to be expected) growing pains of this exploding medium of exchange, access is being demanded by the largest of markets.

Mike Novogratz is a billionaire trader and long-time cryptocurrency bull. He predicted in mid-November that the total crypto market cap would reach $2 trillion by the end of 2018. This is extremely bullish and convenient given the fact he is launching a $500 million hedge fund to invest solely in cryptocurrencies. Nevertheless, he provided a valid analogy to consider,

“The whole market cap of all [cryptocurrencies] is $300 billion. That’s nothing. The NASDAQ at its high, in the 1999 bubble, was $6 trillion, and the NASDAQ was a U.S.-led bubble,” he said. Cryptocurrency, on the other hand, is “a global phenomenon,” with the majority of trading volumes concentrated outside of the U.S.”

A Wall Street Journal report at the end of November showed that Nasdaq and Cantor Fitzgerald & Co. intend to list Bitcoin futures within the first half of 2018.

“The asset class is not going away. If you look at the next level, it will be the institutions coming in and being larger participants in the marketplace, especially as liquidity gets better.”

CNBC reported financial research firm Autonomous Next shows the number of funds investing in digital assets like Bitcoin has grown rapidly to 124.

“Autonomous Next also estimates that the “crypto-funds” have about $2.3 billion in total assets under management.”

We expect this number to grow exponentially as major, well-established exchange operators such as the CME Group allow trading in Bitcoin and crypto-related assets. The regulation is bringing in the institutions, and that is where the serious money (and liquidity) comes from.

If the market cap of all cryptos is about $350 billion (nearly two thirds in Bitcoin alone), what gets it to the $2 trillion level Mike Novogratz has predicted? The answer is accessibility, trust and, most importantly, capital flows. If capital flows increase, there will be more money chasing fewer Bitcoins; and its price, along with other cryptos, will rise.

Novogratz made a final statement that,

“If gold’s $8 trillion, I’m wondering why bitcoin can’t get there.”

Talk we shall, but for the moment, everyone is talking about one thing: Bitcoin’s next potential record high.

CryptoCurrency Opportunities Are Coming in Droves

It’s worth noting that many of the leading independent brokerages in Canada are starting to throw serious money at blockchain-related startups. For example, earlier this quarter, CanTech reported GMP Capital’s CEO Harris Fricker stated,

“To me, the attraction is completely logical, it’s the evolution of the Internet,” says Fricker. “Think of the international remittance market, that’s a four trillion dollar market. You’ve got four and five day delays for the nanny from the Philippines working in Toronto to send some money home to her mom in Manilla, and it’s costing her in some instances ten per cent of the amount she’s sending…”

“We’ve got over 30 per cent of the world’s population not part of the banking system. It’s too expensive,” says Fricker. “The distributed ledger will change this.”

Two takeaways we want you to ponder from our piece this week: Watch the capital flows into Bitcoin and the broader crypto market (take note of the amounts and regions the money is coming from). And number two, whether it’s Bitcoin, Ethereum or the 1300+ other cryptocurrencies in the world, the growing market segment and opportunity lies in the blockchain enabling them…

In the past two weeks we have been inundated with investor decks and pitches for one blockchain-related technology or another. The opportunities are starting to pour into the public markets; and, just like with marijuana-related issuers, Canada’s venture market is becoming a world leader in startup crypto and blockchain related opportunities.

PINNACLEDIGEST.COM
P.S. If you’re not already a member of our newsletter and you invest in TSX Venture stocks, what are you waiting for? Subscribe today. Only our best content will land in your inbox.