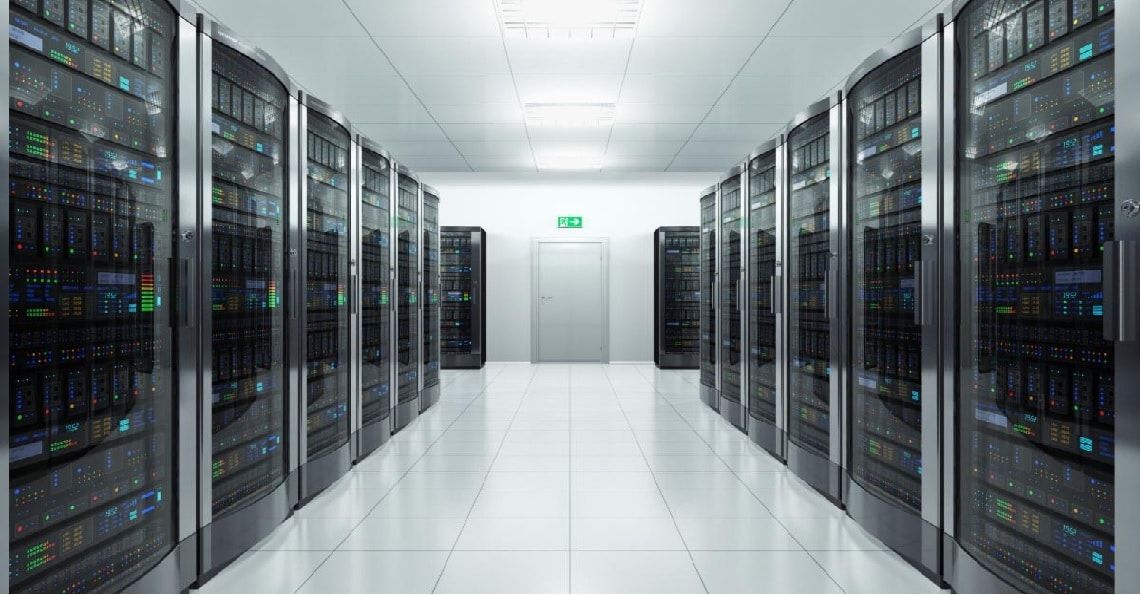 Seven years ago, just before assuming her role as SVP of retail at Apple, Angela Ahrendts predicted that:

“Consumer data will be the biggest differentiator in the next two to three years. Whoever unlocks the reams of data and uses them strategically will win.”

Fast forward to now, years after witnessing the success of many industry giants, and we can see she was right.

In today’s world, the vast majority of consumer data already exists or can exist in digital format. Shouldn’t it be possible then for more businesses to access and “unlock these reams of data” to their advantage? What if consumer data can be “tokenized”?

What if consumers could monetize their personal data? The world is heading in this direction…

Digital assets and decentralization are arguably the two most attractive features of a blockchain network. With an increasing number of digitized assets and securities, new forms of blockchain tokens and cryptocurrencies are on the rise, creating more decentralized marketplaces…

Unique among these are Ocean Protocol marketplaces. They are not merely concerned with transactions of a category of digital data, they embrace the universe of digital data. Data is their asset class.

Before going any further, this is not an endorsement or recommendation of Ocean Protocol, nor are we affiliated. This week’s Intelligence Newsletter is intended to inform our readers on some of the things going on in the world of data.

We are fascinated by where the data industry could be headed…

The BBC’s Science Focus magazine estimates that there are,

“…at least 1,200 petabytes of data held [by the big online storage and service companies like Google, Amazon, Microsoft and Facebook].”

That’s a whopping 1.2 billion GB of data for those four companies alone!

And by the way, that figure is only a fraction of the 59 zettabytes of data created and consumed globally in 2020.

The Statista chart below shows that we can expect this number to almost triple in size by 2024. And in case you were wondering, one zettabyte = 1 trillion gigabytes. 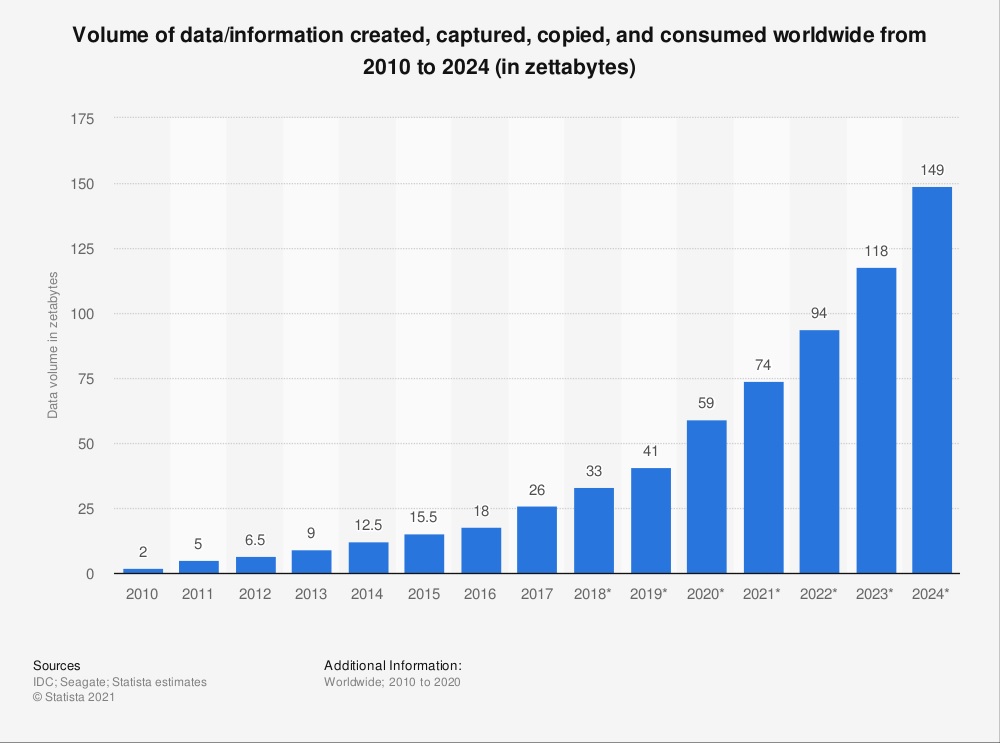 The Battle for Data Democratization

There’s no question that the utilization of these colossal amounts of data has led to impressive growth in nearly every sector of the economy. And to gain, or maintain, the upper hand, businesses are desperately going after the digital information they need to position themselves strategically in the marketplace.

This yearning for data and a new appreciation of the critical role data analytics plays in any successful business has led to an increase in calls for the democratization of data. Possibly because:

“Data democratization pushes organizations to rethink how they manage, distribute, and consume data. That often means driving a dramatic cultural change in order to realize a financial gain. It also means freeing information from the silos created by internal departmental data, customer data, and external data and turning it into a borderless ecosystem of information.”

Kholkar echoes a sentiment that’s shared by many industry leaders globally. In the same article on CFO.com, he wrote that,

“In a 2019 Big Data and AI Executive Survey by NewVantage Partners, executives from corporations such as American Express, Ford, General Electric, and Johnson & Johnson admitted they weren’t where they wanted to be on the road to data democratization.”

Which raises the question: why hasn’t it happened yet?

“Data democratization means that everybody has access to data and there are no gatekeepers that create a bottleneck at the gateway to the data.”

Cloud storage, file-sharing technology, and web services have all seen significant breakthroughs in the last 10 – 15 years. Information sharing couldn’t possibly be easier than it is today from a technical point of view. That said, many of us thought the same thing 20 years ago.

Look closer, and you might find that the “bottleneck” lies not with advances in technology, but in the potential abuse of said technology.

Earlier this year, CNBC reported that Facebook and other tech giants could soon face a flood of court cases over data privacy. The article talks about growing concerns over data protection in the wake of scandals such as,

“…the Cambridge Analytica-Facebook saga that emerged in 2018, where users’ data was being used to try to influence the outcome of elections.”

The world of artificial intelligence – arguably the most data-driven pursuit today – is no stranger to controversy either. On the topic of AI, Elon Musk once proclaimed that,

“The least scary future I can think of is one where we have at least democratized AI.”

Musk was implying there’s a very important need for some measure of transparency, and perhaps regulation, regarding how AI is developed and used commercially.

Many sectors have since jumped on the AI bandwagon, hoping for quantum leaps in the technology that could define their business in the future. In medicine, one article from the Wall Street Journal about whether AI can replace human therapists warns that,

“Despite the promise, there are some big concerns. The efficacy of some products is questionable, a problem only made worse by the fact that private companies don’t always share information about how their AI works… as well as fears of perpetuating racial or cultural biases. Concerns also persist about private information being shared in unexpected ways or with unintended parties.”

Great expectations notwithstanding, there seems to be as much fear as there is confidence in AI.

“…there are essentially three different ways that companies collect data about their customers. By asking them directly for it, indirectly tracking them, and by acquiring it from other companies.”

As we have already seen, there are questions surrounding the latter two methods of data collection and its subsequent exploitation. And here is where Ocean Protocol may offer a potentially democratic solution…

Ocean Protocol hopes to create a decentralized data marketplace where data owners can share or monetize their data without the intervention of a third party. Their mission statement emphasizes that,

“We aim to unlock data, for more equitable outcomes for users of data, using a thoughtful application of both technology and governance.”

In the Ocean ecosystem, data owners/providers are meant to maintain control and storage of their data at all times. To sell their data, they advertise specific details or specifications about the nature of the information they possess in an Ocean Marketplace – built on Ethereum mainnet – to data consumers/purchasers.

Consumers (i.e., the people, companies or institutions that want to utilize the data) use OCEAN tokens to purchase data in an Ocean Marketplace. A consumer in need of curated data for a specific market simply goes to a Marketplace specializing in that area to publish a request for data.

Once the data needed is found, the consumer requests access to this data from the provider. The data is then streamed to the consumer after the data provider verifies that payments and permissions have all been validated successfully. An Ocean Protocol service called Brizo streams the data itself and never its location to avoid duplication or piracy.

In theory, a bike courier, who knows the fastest bike routes to different parts of a city, could potentially monetize that data by selling it directly to individuals or companies interested in data on city routes.

Individuals or companies looking for that type of information would simply go to an Ocean-based marketplace specializing in mapping data to search for data. When they find the courier’s data, they can request access to it if they’re interested.

Presumably, home appliance users could also collect and sell data on their usage of appliances to businesses focused on home appliance automation or governments concerned about energy consumption. Even video gamers can possibly monetize their gameplays/strategies and activities by selling them to fellow gamers or the gaming company itself.

Data Wars: Stake It Till You Make It

Within these markets, it tries to incentivize holders of OCEAN tokens to add liquidity to a given market by ‘staking’ their tokens on datasets; so that whenever there’s a transaction on that dataset, the stakers can earn a fraction of the transaction fee generated — an attractive proposition as it provides market participants other sources of earning OCEAN tokens beyond selling their data.

Theoretically, staking could also serve as an endorsement of quality data.

As is the case with most decentralized transactions, there is a risk of buying bad or low-quality data. Ocean Protocol claims to mitigate this risk with staking. The logic being that the more a dataset is staked by market participants, the greater the confidence a buyer will have in the quality of that piece of data.

Diving Into Ocean and the Fight for Consumer Data Control

In October 2020, coindesk reported a number of Ocean partnerships, including a collaboration with CivictechHub,

“the world’s largest database of projects dedicated to fighting the COVID-19 pandemic”.

“‘To incentivize better data flowing into our COVID-projects database, and to facilitate cross-collaboration, the ability of the Ocean Protocol Market’s liquidity to double as a curation and investment mechanism is a logical step,’”

With an approximate market cap of US$575 million (as of 5PM EST on May 6, 2021), OCEAN currently trades on more than two dozen crypto exchanges. There are approximately 426 million OCEAN now in circulation, roughly 70% of their total supply. The entire OCEAN supply is expected to be released by 2070.

Since its initial coin offering in March of 2018, the price of Ocean Protocol has risen sharply

It is crucial in shaping future technologies that could disrupt many markets, and potentially create new sectors in our economy within the next decade (or sooner).

AI’s virtually insatiable thirst for data has not gone unnoticed. And blockchain technologies show the most promise of satisfying this need while protecting the privacy and the intellectual property of consumer data.

Finally, with initiatives like Ocean Protocol, a new marketplace – powered by blockchain – connecting data-seekers and data-owners without a third party could finally be on the horizon.