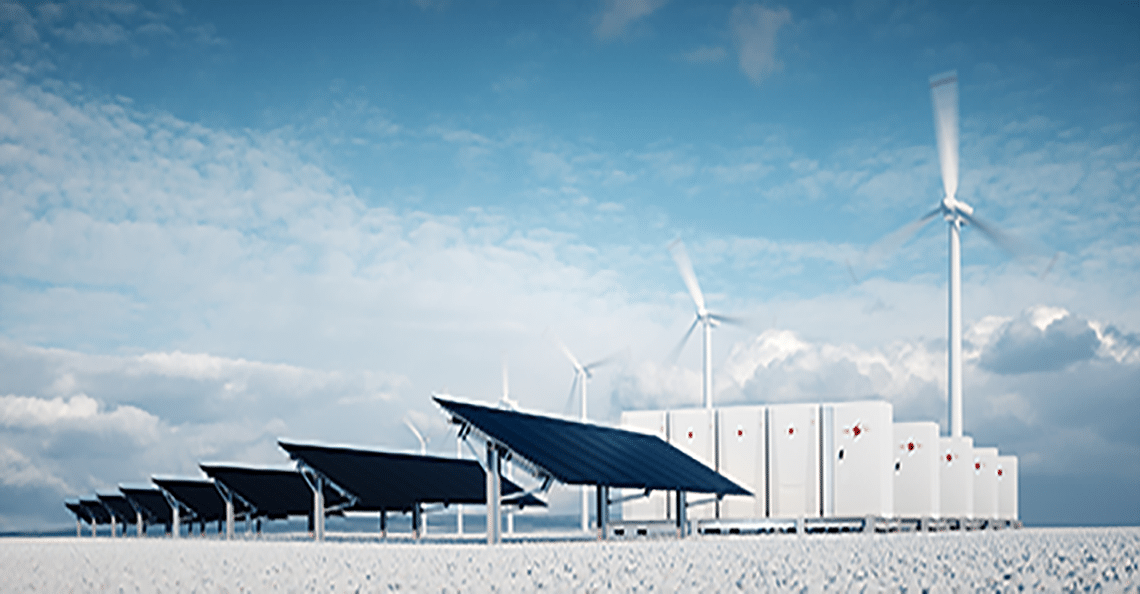 However, over the last decade, the cost of renewable power generation has dropped tremendously, especially when compared with fossil fuel energy costs. Take a look at the curves below:

Notice the astonishing descent in the cost of solar panels. Per the chart above, wind and solar power are now the cheapest sources of energy.

Then there’s consumption. Compared to fossil fuels (which are now being consumed more than ever), renewable energy consumption is practically negligible.

While the transition to newer, sustainable sources of energy was always going to be a gradual process, one major reason behind renewables trailing fossil fuels in energy consumption lies in the lack of adequate storage mechanisms, particularly for the two least expensive, but most intermittent, sources of energy…

Wind and solar power can produce hundreds of gigawatt-hours of energy as long as it’s a windy or sunny day. Unfortunately, all that can be used of what’s generated is only what is demanded at the time of production. The excess power that’s generated – which could conceivably be used at a future time of low sunlight or less wind – goes to waste since there’s currently no grid-scale battery that can store all the energy produced from said sources.

As a result, wind and solar power, although cheap, remain subject to their corresponding elements and cannot be relied upon as a baseload power source.

It is precisely this intermittency obstacle on the road to net-zero emissions that flow batteries are attempting to overcome.

Wikipedia describes a flow (or redox flow) battery as a,

“…rechargeable fuel cell in which an electrolyte containing one or more dissolved electroactive elements flows through an electrochemical cell that reversibly converts chemical energy directly to electricity.”

Hence, in flow batteries, the total amount of electricity that can be stored and generated depends on the volume of electrolyte in the tanks, making it relatively straightforward to increase or reduce its energy storage capacity.

Given its aqueous system, flow batteries aren’t really suitable for mobile applications. Additionally, flow batteries need space and some auxiliary technology in order to be functional. Many of today’s conventional consumer electronics are housed in tightly packed form factors. So, the focus of flow batteries is on their use in large, utility-scale, stationary applications.

According to the National Renewable Energy Laboratory – a national laboratory of the U.S. Department of Energy – a few key characteristics of a battery storage system are:

Possibly the most attractive features of the flow battery are its scalability, and the decoupling of its energy and power capacities. Because the energy is stored in the electrolyte, the battery’s energy capacity is practically limitless given its proportionality to the volume of the tank. And, the power capacity depends essentially on the number of cells in the power stack.

Additionally, compared to nearly all other available batteries, including lithium-ion batteries, flow batteries have the highest lifetime and cycle lifetime. They have rapid response times and have very low self-discharge. They are also considered safe because the electrolytes are typically not flammable, and can be stored away separately.

UK-based market research firm, IDTechEx, believes that the widespread adoption of redox flow batteries is “just a matter of time.”

According to the firm’s research,

“Driven by the adoption of an increasing amount of variable renewable energies (VREs), stationary storage devices – besides Li-ion batteries – are approaching the market, and IDTechEx foresees a large adoption of Redox Flow Batteries toward the end of the next decade…”

In a follow-up report last summer, IDTechEx pointed out that,

“Over the last few years, the price of vanadium has been one of the parameters affecting the adoption of this technology. To compensate for this issue, the vanadium flow battery producers started to collaborate with vanadium electrolyte companies to cope with this problem.”

We will look into the supply situation of vanadium momentarily but before we do, a quick mention of two other common types of flow batteries. First, the iron redox flow battery (IRFB).

The iron redox flow battery is a candidate to compete with vanadium flow batteries, especially from the cost-efficiency point of view. Iron, which like vanadium can exist in multiple oxidation states, is far more abundant and cheaper than vanadium, offering a reduced capital cost.

Both iron and vanadium electrolytes are almost infinitely reusable, since changes in the oxidation states of the electrolytes do not damage/degrade the solution. However, all-vanadium flow batteries currently provide the best performance in terms of energy efficiency and density. That said, it will be interesting to see which of the two metals prevails as flow battery technology evolves.

The other, less prominent, type of flow battery is the hybrid zinc-bromine flow battery (ZBB), developed by Exxon in the 1970s. Currently, these batteries are less efficient, have lower energy density, and require more complex construction and maintenance than VRFBs and IRFBs. The hope of ZBBs is to eventually provide energy storage solutions at an overall lower cost than the alternatives, but ZBB developers are yet to prove that it can actually be accomplished.

Vanadium is the 20th most abundant chemical element in the earth’s crust. It is more abundant than copper, cobalt and lithium. It has typically been recovered as a byproduct of uranium mining or directly from magnetite iron ore deposits.

The United States Geological Survey (USGS) estimates that about 99% of global reserves of vanadium are contained in China, Russia, Australia and South Africa. And, as of 2020, more than 80% of all mined vanadium came from China and Russia. See the table below for details.

World Mine Production and Reserves of Vanadium (tons)

Today, vanadium’s most important application is in steel fabrication, which accounts for about 85% of its use. The USGS reported a 35% drop in U.S. consumption of vanadium between 2020 and 2019. However, much like with lithium, cobalt and the other so-called green metals, the growing need for grid-scale storage for intermittent power sources could prompt a surge in demand for vanadium.

Interestingly, Shane Lasley of North of 60 Mining News noted that,

“While only a trifle amount of vanadium was produced in North America last year [2020], Canada and the United States each host rich deposits of this steel strengthening and emerging battery metal.”

Despite the “high cost” of vanadium for flow battery producers, vanadium appears to be dealing with an incentive price problem. An investigation conducted by the U.S. Department of Commerce reported that in 2020, the primary producer of vanadium in the U.S. only produced once in the previous five years, and supplied less than 4% of total U.S. demand.

At the moment, the demand for and price of vanadium is apparently too low for cost-effective primary production in Canada and the United States (both of whom consider the metal as critical to national economic success).

However, if redox flow batteries become key to unlocking the full potential of the renewable sector, the price of vanadium could be off to the races. Already, in the last year, the metal’s price soared by more than 60%.

Since signing on to the Paris Agreement more than five years ago, governing bodies worldwide have made bold moves to support and incentivize the renewable energy industry. Last spring, President Biden announced the United States’ goal of reaching 100 percent carbon pollution-free electricity by 2035. According to the White House, the goal,

“can be achieved through multiple cost-effective pathways each resulting in meaningful emissions reductions in this decade. That means good-paying jobs deploying carbon pollution-free electricity generating resources, transmission, and energy storage…”

In July last year, the U.S. Department of Energy (DOE) embarked on its Long Duration Storage Shot program that aims to reduce the cost of grid-scale energy storage by 90% for systems that deliver 10+ hours of duration within the decade. The program’s introductory document revealed that,

“…the President’s Fiscal Year 2022 Budget Request included a total of US$1.16 billion for these activities…”

Only two months after announcing the program, the DOE invested roughly US$18 million in four energy storage companies. All were flow battery projects. The funding announcement highlighted that flow batteries are,

“…less expensive, safer, and more flexible and adaptable. Selected projects will work to improve manufacturing processes for individual flow battery components and integrate those new or improved components into a prototype system with a mid-sized capacity for grid and industrial applications.”

There’s a growing sense that grid-scale storage is crucial for enabling the proliferation and increased consumption of renewable energy. And, as evidenced by the level of investment into them, flow batteries offer a promising solution to the long-duration storage hurdle in front of the clean energy industry.

Not surprisingly, a few metals stand to gain from the momentum behind flow batteries – unearthing a potentially new suite of “green metals.” Vanadium currently leads the pack, but iron, and possibly zinc, could also benefit from the increasing effort to secure utility-grade energy storage systems.