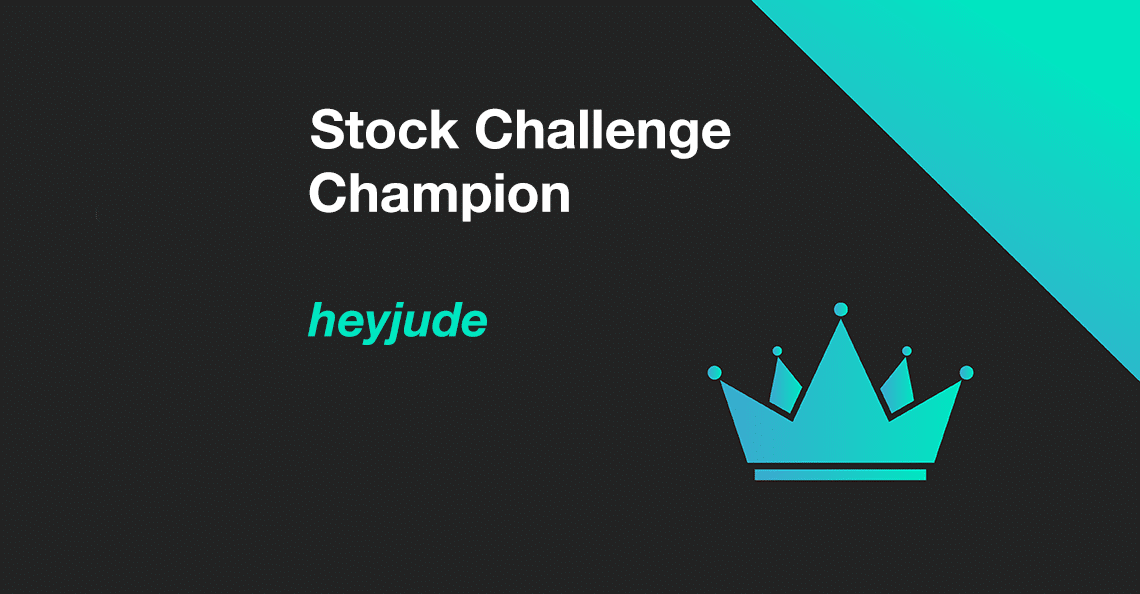 We present to you our new champion of the month!

After the lead changed hands nearly every day this week, with an average return of 111.19%, long-time member and player ‘heyjude‘ finishes April in top spot.

So let’s give it up for ‘heyjude‘! Congratulations on a job well done!

Congratulations to the three of you! Your prizes will be shipped out shortly.

Comparing last month’s and this month’s SCI (Stock Challenge Index) side by side illustrates the volatility for small caps over the last 60 days.

After starting April down -5%, the SCI bounced back up to just under 3% before free-falling back down to -6%; and now closing the month up 0.4%.

In the words of Peter Lynch, “Everyone has the brainpower to make money in stocks. But not everyone has the stomach for it.” If Stock Challengers hadn’t learned this lesson by now, the last couple of months must have served them well.

182 of April’s 395 contestants managed to net positive returns from their picks this month. That’s roughly 46% success from Stock Challengers. Although better than last month, it’s still nowhere close to the results from January and February of this year.

The top 5 stocks picked in April’s contest have representation from Finance, Oil & Gas, Tech and Biopharma…and that’s just the top 5. Take a look at the table below to get a sense of how diverse picks were in April:

8 of the top 10 finishers picked one of the three best performing stocks in April’s contest.

Interestingly, despite the nebulous makeup of the top-performing stocks sector-wise, energy-based stocks were the most popular picks among this month’s leaders.

Most Popular Picks in April

The table below shows the most selected stocks this month:

Even after a poor run in the previous month, GameStop Corp. was still popular with Stock Challengers in April. POET Technologies makes it to the top 3 for the 2nd month in a row. And BIGG Digital Assets Inc. in third is an indicator of what we suspected: investor sentiment looks to be shifting towards blockchain once again.

As mentioned already, the volatility Stock Challengers began to see in March is definitely not over yet. Given how the markets have performed in recent months, whether or not investors will “sell in May and go away” is anybody’s guess…