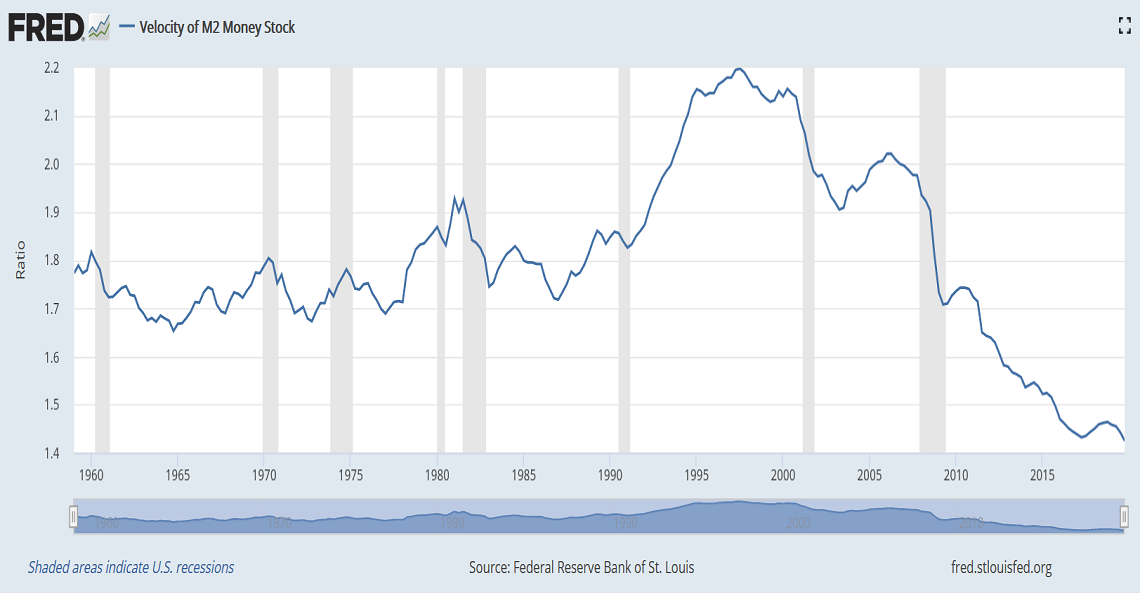 The Federal Reserve, anemic growth, and an aging population are causing the velocity of money in the United States to crater. While many believe trillions in stimulus will cause inflation, low-interest rates are providing little incentive for banks to lend when the return on their loans is low.

The bottom line is that people are not spending money. They are paying off debt and hoarding what cash they have.

The Fed is fighting this title wave of deflation and lack of spending. And, despite the trillions in fresh capital, it is simply not finding its way into the economy.

So, what is the velocity of money, and why does it matter?

According to the Federal Reserve Bank of St. Louis,

“The velocity of money is the frequency at which one unit of currency is used to purchase domestically- produced goods and services within a given time period.”

What is so fascinating about this declining number is how debt factors into the equation. The Balance confirms that,

“…families, businesses, and the government are not using the cash on hand to buy goods and services as much as they used to. Instead, they are investing it or using it to pay off debt.”

The higher the debt, the more drag and more difficult it is to service the debt. One look at the US household debt to GDP ratio confirms where many Americans continue to put excess cash.

The Federal Reserve’s most enormous problem is how to get consumers to spend. A whopping 70% of U.S. GDP depends on consumer spending after all. Declining velocity stands in the face of hyperinflation and solid GDP growth. There can be no hyperinflation without increased spending. Right now, no one is afraid of inflation or prices would be skyrocketing. Instead, people are hoarding cash, albeit a small percentage of the population is buying hard assets, such as gold and silver, which both broke out today. Stagflation happens when inflation takes hold during a period of high unemployment and low growth. We saw this in the 1970s and we may see it again. With high debt, low growth and trillions in new liquidity set to hit the system, the chances for inflation are rising.

For the Fed and the U.S. government, inflation is the least of their concern. Because only so little perhaps 1/10 of what they print actually makes it to main street. For investors, we could be looking at a reflate of financial assets, similar to what we saw between 2009 and 2011. The Q1 2020 velocity of money number is just a few weeks away. It will be another record low; the question is becoming, can the Fed or US economy ever reverse the decline? One thing I know for sure is that if the Fed can’t raise interest rates, it will be difficult to achieve.