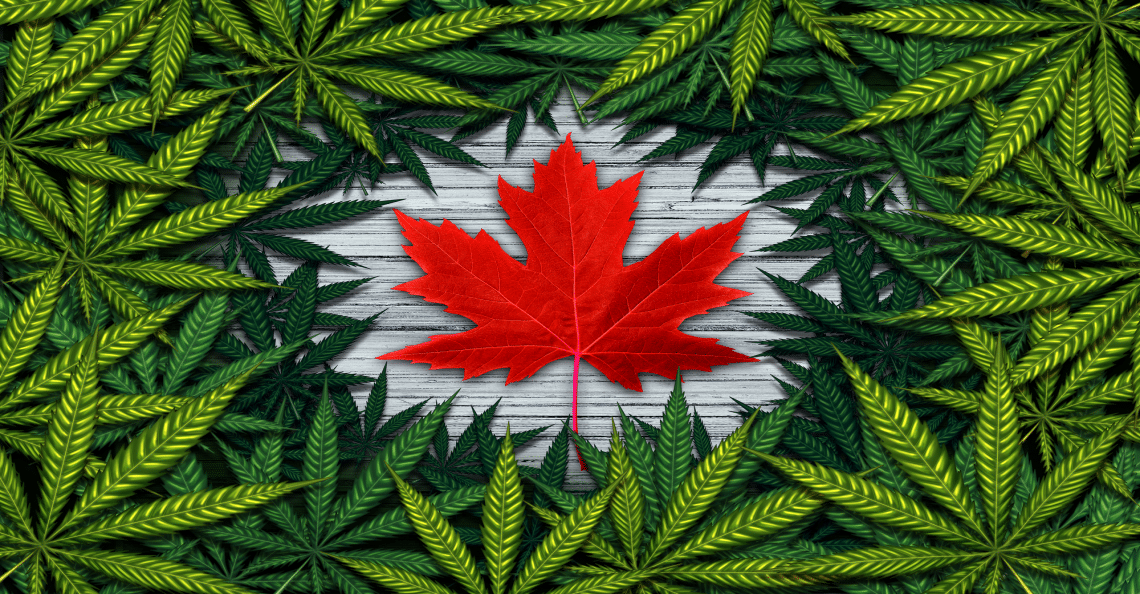 Selling pressure across the TSX Venture has led to a rather brutal downturn over the past week. While some are pointing to early seasonal weakness (‘sell in May’), one needs to look no further than Canada’s marijuana sector – which has remoulded the exchange to a certain degree…

Most marijuana stocks peaked in January and have been taking it on the chin ever since. With a healthy chunk of the Venture now tied to the marijuana sector (percentage of overall market capitalization), it is worthwhile to review the interrelated nature of these two indices.

TSX Venture and Marijuana Stocks | A Marriage in Speculation

At the moment, no sector is influencing the TSX Venture the way marijuana-related stocks are. One can make the argument that no sector has influenced the direction of the exchange like this in over five years. As the blockchain pretenders fade to black, and junior miners remain subdued, volume and interest is squarely on marijuana-related issuers. Check out the TSX Venture and Canadian Marijuana indices below:

The TSX Venture lost just over 5% in 5 trading days, before rebounding Thursday on lower than average trading volume.

The Canadian Marijuana Index (CMI) fared much worse, losing 12.6% over that same period, before leading the Venture higher on Thursday.

The only difference between the above two charts is that the CMI’s drops and rebounds are far sharper. It is a more volatile and reactive index than the TSX Venture. This makes sense because it does not have the mining, tech or alternative deals to buoy it when weed stocks are falling. Nevertheless, the three-month charts show just how interconnected these two indices have become.

A quick glance and it is hard to tell the two charts apart. Again, the only difference between the above two charts is the sharpness of the moves. The CMI is significantly more volatile than the TSX Venture – arguably the most volatile small-cap exchange in the world.

The effect on the TSX Venture is clear: marijuana stocks are now the leading indicator towards how the exchange will perform.

So, why are marijuana stocks in free fall?

Valuations in the marijuana sector depend on future foreign and domestic government policy and timing of that regulation. Because of this, volatility is always one policy delay away.

While medical marijuana has been legal for a few years in Canada, questions remain on the recreational side, specifically in regard to zoning of where sales can be made and timing of regulation.

A vote to determine the fate of nation-wide recreational marijuana legalization takes place on June 7th. Canada’s Bill C-45 will hit the floor to likely be passed by the Senate in just over two months. However, if approved, it will be an additional two to three months before legal recreational weed is available for purchase. Hence, when this delay came to light in February, Canada’s marijuana sector began what has become a prolonged correction.

N.B. The Canadian economy contracted 0.1% in January and is desperate for the tax revenue and added growth legalization will bring. We have personally toured new growing facilities that have employed hundreds of construction workers. Understated by the media, the marijuana sector has been a boon to Canada’s economy over the past few years. Dozens of secondary sectors are continuing to support its growth.

As domestic growers target international markets for export and growing licenses, they will be tied (from a risk/reward standpoint) to foreign policy as well. Delays dealing with government are normal, but the general trend is towards acceptance and increased scientific and medical data to support legalization. Canada, through its collection of medical data and quality assurances, has the enviable chance to lead the world in medical marijuana expertise. We contend that in order to justify many current valuations, and grow them, several Canadian growers need to expand internationally.

Certainly, what hurts marijuana stocks the most on down days is a focus on potential future earnings. When markets weaken, investors tend to remember this sobering point…

During stable or bullish periods (which we saw in January), the majority of cannabis producers are valued with future earnings and revenue in mind. Positive speculation is rampant. However, the vast majority of producers have relatively small revenue when compared with their valuations. When sentiment in the sector turns negative, investors tend to focus on the elephant in the room, and reduce exposure. Pretty straightforward.

While marijuana producers flaunt Top Indica Flower awards, investors fret over the brass tax. How much money did the company make last quarter? Are future projections realistic? Will there be enough demand? If not, how will they expand operations?

Thousands of Canadian retail investors are underwater on marijuana-related deals they bought near the highs. Remember, the volume in January for marijuana stocks, as they reached all-time highs, was among the highest on record. Investor participation in the run up to new highs was widespread. On days like Wednesday, where the entire Canadian Marijuana Index declines 4.5%, a new wave of capitulation takes place – spreading across the Venture and into other sectors…

Hundreds of marijuana stock chasers/investors who have been waiting for a rebound, are throwing in the towel, unwilling to endure more pain. Frankly,  this is setting the stage for a big rebound in pot stocks. Doing proper due diligence is paramount as the well-funded issuers have been aggressively sold off along with the bad ones.

At Pinnacle, we have been biding our time, waiting for a little more forward guidance on policy; and this sell-off to tire. There has been some carnage of late, which is enticing us more and more every day…

Institutional money has not escaped the carnage. Many marijuana-related companies, capitalized on investor demand by issuing equity in recent months.

A Serious Threat to Weed Stock Values, published on February 12th, highlighted the need for consolidation among Canadian cannabis companies and expansion beyond our borders. The Canadian Marijuana Index traded at 768 on February 12th and has given up exactly 100 points, representing over 13%, as of March 28th. The exchange rebounded Thursday, March 29th – up 4%.

“Canada’s marijuana market is just not big enough to support many of the valuations of January, or today, for marijuana producers.”

“Exporting, or expanding to world leading economies, barring legalization, is the main opportunity for Canadian marijuana producers. However, it is the greatest challenge and may be the only way, over the long-term, to support recent valuations.”

Public marijuana companies have more access to capital in Canada than almost anywhere else in the world. Foreign nations are figuring this out and inking deals with savvy Canadian firms. The best-positioned cannabis deals have raised hundreds of millions of dollars over the past twelve months when the market was hungry for exposure. These companies are primed for busy news flow seasons, potentially leading to recovering valuations in the coming quarters. For the right deals, the selloff since January has created a perfect buying opportunity. When policy catches up in Canada and abroad, these stocks will have the potential to capture substantial market share. They’re ready to dramatically scale up.

The bellwether player in Canada is Canopy Growth (TSX: WEED). Its stock chart may provide some comfort. It has not broken support, but remains in a long-term uptrend, despite correcting from its highs of early January. 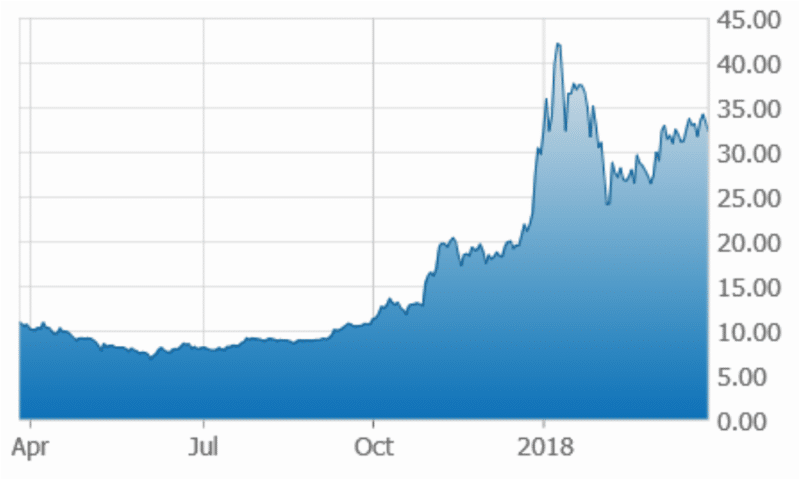 On February 7th, Canopy announced the closing of a $200 million bought deal financing through the issuance of 5.8 million units at $34.60 per share. Canopy ended that press release and every release since with a very telling slogan:

In Canada’s marijuana sector, future is the keyword of the day. When investors take their eyes off potential future growth (the speculation aspect), current valuations for many producers simply don’t make sense.

We expect the marijuana sector, led by roughly half a dozen producers, to secure international relationships and lead the market higher before long. However, it does not look like the pain is over as a critical support threshold remains at 632 for the Canadian Marijuana Index – hit on February 27th. The index rebounded over 4% Thursday, up nearly 30 points from Wednesday’s low of 658. Again, the CMI is like the TSX Venture’s hyper little brother, overreacting to the up and downside. As a final caveat, if the CMI breaks 632, look out; it is likely to go much lower in the short-term. Track the index here.

A marijuana stock buying opportunity is likely going to present itself in April… specifically for companies who are cashed up and led by industry-leading management.

Finally, our next Weekly Volume will detail the opportunity in the Canadian marijuana sector, and the business of exporting that expertise overseas. There are likely some opportunities approaching that we won’t pass up.