While published in February of 2018, the above talk from January of 2018 is an interesting look into where North American capital and liquidity is going. As investors in the TSX Venture and CSE market, knowing if the flow of capital and overall liquidity is increasing or decreasing is very important. For years we’ve written about declining volumes on the TSX Venture. Now, as Canada’s mining sector continues to decline, the CSE, led by the marijuana space, is seeing volumes increase.

In a video from much earlier in the year, James Black of the CSE outlines just how incredible 2017 was for the exchange and many of its issuers. Despite a terrible July and August, the CSE is rebounding with a vengeance. The entire index was up 6.5% today alone and has gained more than 200 points since bottoming on August 14th. The CSE is more volatile than the TSX Venture – another sign of its correlation to marijuana stocks. 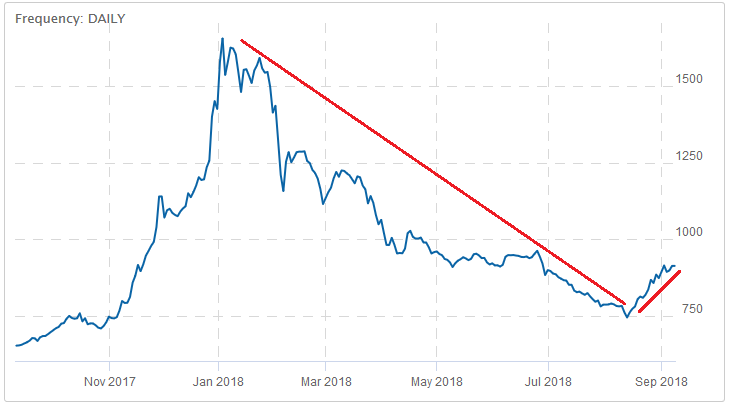 A first for the CSE in 2017, was posting trading sessions that exceed the total value and number of trades on the TSX Venture. This trend has continued in 2018, led by exceedingly liquid marijuana-related issuers. For example, on Monday the CSE had total volume of over 236 million, while the Venture had just 101 million. Granted the CSE had one issuer responsible for about 117 million – FSD Pharma (HUGE: CSE), volume on the CSE is still outpacing the Venture of late.

On Friday, September 7th almost the same thing happened. The CSE totaled over 161 million shares traded worth just over $100 million. The Venture had volume of more than 74 million, but far less total traded value.

Again, FSD Pharma, a single CSE issuer contributed a whopping 88 million shares to CSE total volume that day. The trading in that one company equaled far more than every issuer combined on the TSX Venture that day. Like today, even without this issuer, which is routinely one of the CSE’s most liquid, the exchange is trading more than the TSX Venture. What’s more, the CSE has far fewer issuers than the TSX Venture. There can be but one reason for this: the rise of the marijuana sector and marijuana-related stocks. So, the stigma of investing on the little-known CSE is fading away. This matters to TSX Venture investors for a few reasons.

Note: FSD Pharma, owns, through its wholly-owned subsidiary FV Pharma Inc., a license to produce marijuana under the Access to Cannabis for Medical Purposes Regulations (ACMPR) which was originally granted on October 13, 2017. Headquartered at the former Kraft plant in Cobourg, Ontario, approximately an hour’s drive from Toronto, FSD Pharma’s management’s mission is to transform the facility into the largest hydroponic indoor cannabis facility in the world.

Click here to learn more and check out its quote.

Looking at the CSE market trend with respect to volume and value, a great slide in the presentation pops up onto the screen at about 3:25. This explosion in liquidity (in early 2017) was due almost entirely to the marijuana and blockchain sectors. However, it should be noted that the CSE’s increase in volume is liquidity and value the TSX Venture is missing out on.

While the Venture was historically the only game in town, we cannot expect it to return to valuations of the past. Hence, the emergence of the CSE which is home to a growing amount of North American speculation capital. From working with public companies for over a decade, I know that many continue to opt for the cheaper and faster to list on CSE. When times were tough during the bear market of 2011 to 2016, entrepreneurs and issuers were looking to squeeze pennies. When the markets began to turn in 2016 and 2017, new entrepreneurs in the cannabis space held no preconceptions about the TSX Venture or the CSE; and, as we are seeing now, many went with the latter. The breakout on slide “CSE Market Trend” at about the 3:25 mark is proof of that.

The speaker goes on to discuss various disclosure practices and regulatory filings; however, for investors in Canada’s junior small-cap markets what is important to recognize is with the emergence of the CSE as a marijuana-related issuer powerhouse, previous indices levels cannot be expected on Canada’s older junior exchange – the TSX Venture.