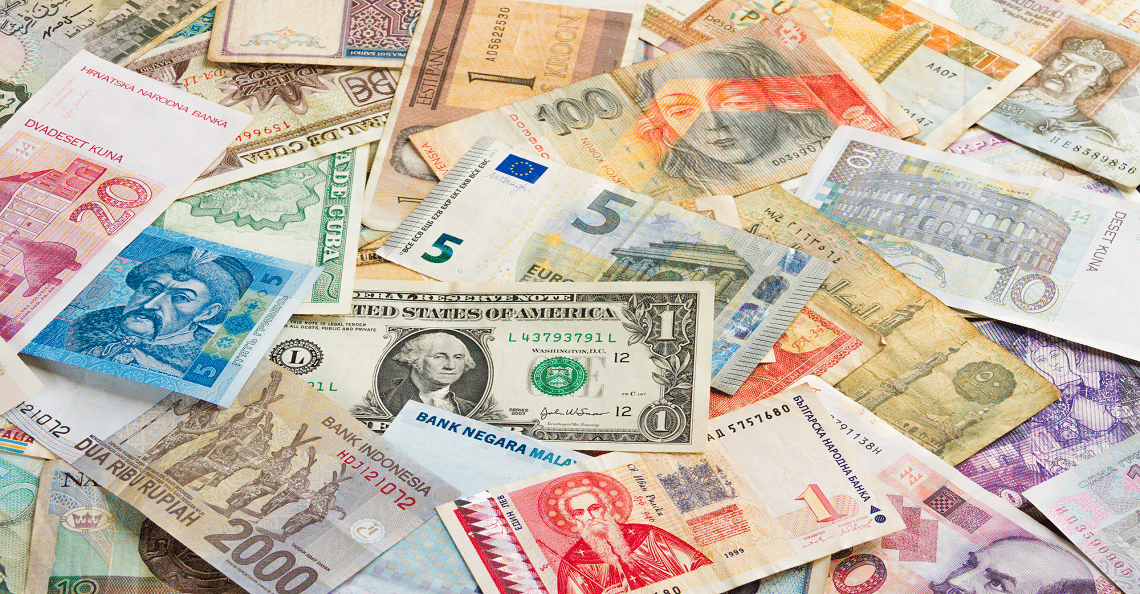 The U.S. economy needs to post 2.4% (or better) GDP growth for Q4 to average above 3% in 2018. Up until a few days ago, this impressive GDP clip was a given, an afterthought. Then, on February 14th, the Atlanta Federal Reserve came out and revised its Q4 growth down to 1.5% from 2.4% – nearly a full percent lower!

The highly unusual last-minute revision is based, in large part, on a 1.2% drop in December retail sales, the steepest decline in nine years.

Fear of weaker growth going forward has policymakers and market participants rethinking how 2019 and, more importantly, 2020 might play out (US election year).

The Fed and its central bank counterparts are now showing signs of greater accommodation – or in their words, ‘exercising patience’ and ‘flexibility.’

For investors, the questions of the day are:

Are central banks preparing for a recession?

And in doing so, are they setting the stage for lower rates and more quantitative easing?

*Why are “almost all” Federal Reserve members in favour of ending its balance sheet reduction plan roughly a year earlier than estimated?
See more here from MarketWatch.

You may have thought the days of QE are behind us. However, recent economic reports suggest there is potential for QE4…

“The Fed: No more interest-rate hikes, flexible on balance sheet reduction, even open to stopping it altogether and discussing making bond purchases a regular tool, not just an emergency measure. I thought we were done with those? Is quantitative easing (QE) 4 coming?”

Despite the Trump boom and renewed sentiment across many US sectors, America is getting little help from abroad. Opponents say the global slowdown is in part due to Trump’s aggressive trade strategies, but we disagree.

Opinions of the reasons why aside, China’s economy (the world’s second largest) continues to slow, and the EU remains stuck in mediocrity, growing at a scary low rate of 0.2% in Q3 of 2018. Italy, as an example, is currently in a technical recession. This is threatening to bring the entire EU into recession.

So, central banks are dusting off their old playbooks as economic concerns grow. As far as the global economy is concerned, the US, China, and EU are everything. If one recedes, we all feel it.

US sanctions are pushing China to the brink. Its stock market is in a prolonged bear market, and the country’s growth trajectory continues to weaken. It is clear to anyone watching that China is becoming increasingly desperate to reverse its declining growth.

A Reuters article reported, “Some analysts believe China could deliver 2 trillion yuan ($296.21 billion) worth of cuts in taxes and fees, and allow local governments to issue another 2 trillion yuan in special bonds largely used to fund key projects.”

And, according to ING economists,

Rest assured, stimulus is coming to China in a big way.

China Will Not Wait Long to Launch Stimulus

The Chinese government has the ability, perhaps quicker and more focused than any other country, to prop up sectors of its choosing via credit or direct investment. Of course, significant stimulus now will come at the peril of future growth, but that appears to be okay for the Chinese government.

With China’s factory activity down, peer-to-peer lending rampant, and its stock market floundering after being crushed in recent years, the phrase “global economic slowdown” has become popular amongst financial media.

To the basket case of the global economy…

EU Economy on the Brink

The EU and the US have some of the same problems, but anemic growth has plagued Europe since the Great Recession. GDP for the third quarter of 2018 increased 0.2% from the prior quarter. Although annual growth should be around 1.6% for 2018, the EU is flirting with danger.

Short term borrowing costs, tied to the ECB’s key interest benchmark, remains at a record low of zero, yet the EU economy is only marginally growing. Europe’s central bank has a negative 0.4% rate on excess funds that banks leave at the ECB. Designed to push banks to lend instead of hoard, it has helped move the inflation rate to near 2% in recent quarters.

Rates are still near 0 in the EU and there is lacklustre growth, yet the ECB balance sheet is larger than ever.

“The bond-buying stimulus program was a way of pumping newly created money into the economy. The ECB bought the bonds from banks by electronically increasing the reserves they hold at the ECB — creating money out of thin air. The purchases drive up the bonds’ prices and, in so doing, push down their interest yields. Lower rates make credit more affordable for governments, businesses and consumers.”

Now, here is where it gets interesting,

“Draghi noted that in a sense the purchase program is not over, since the ECB has committed to maintain the size of its bond pile for an extended period by reinvesting principal as it is repaid. Otherwise the pile would shrink, gradually tightening monetary policy.”

Up until recently, this was the ECB’s sentiment, not the Fed’s. However, in early February the Fed began singing a different tune, and it appears to be preparing to discontinue its balance sheet reduction program, at least temporarily…

Even as early as January of 2019, the Fed was going along with its original plan to let its balance sheet unwind. That’s an important aspect in this evolving storyline of economic headwinds. More on this shortly…

The ECB’s Balance Sheet is Something to Behold

In an article from This Time it is Different titled, ‘The ECB balance sheet is now over 4.5 trillion Euros, some 45% of Eurozone GDP,’

“Everyone is focussing on the balance sheet of the Federal Reserve (which is $4.45 trillion or some 23% of GDP of the US) but it is nothing compared to that of the European Central Bank (which is 4.5 trillion Euros or some 45% of the GDP of the Eurozone).”

Despite interest rates stuck at zero in the EU, “The central bank brought to an end its €2.6 trillion bond purchase scheme last month, but said it will keep reinvesting cash from maturing bonds for an extended period of time,” according to TradingEconomics.com.

The ECB will have a very hard time moving interest rates higher or reducing its balance sheet for years to come. A Mises Institute post on Seeking Alpha from late December titled, The ECB’s Quantitative Easing Was A Failure, Here Is What It Actually Did, highlights the stark reality for the eurozone:

“With public spending averaging over 46% of GDP, an annual deficit of over 1.7% on average, and 86% debt, talking about austerity is like eating a box of cakes and calling it “diet.”

According to the Mises Institute,

“In the eurozone, the ECB has been 7 seven times the net issuances of sovereigns. No investor is likely to buy eurozone sovereign bonds at these yields once the ECB steps down.”

The ECB is often the buyer of last resort. It is precisely this behaviour that leads to a complete loss of confidence in a currency. And this is one of the reasons Brexit is such a big deal…

Although not part of the group of countries which use the euro, England leaving the EU (set for the end of March), shines further light on the economic zone’s turmoil and hurts investors’ confidence. It could be viewed as a possible blueprint for other countries (potentially Italy) to try their hand at leaving the EU as well.

The Fed is by far the most important policy maker and central bank in the world. The recent about-face following intense criticism from President Trump has created a total reversal in thinking. Instead of a couple more hikes in 2019 from 2.25-2.50 to say 3%, the markets are betting on no rate hikes, and even a potential cut in 2020.

“Officials issued a separate statement last month committing to an operational strategy of abundant bank reserves, which means a bigger balance sheet than would otherwise be the case.”

Right now the balance sheet is capped at rolling off $50 billion per month. We’ve documented this many times in the past. The Fed’s balance sheet, after hitting a high of $4.5 trillion in 2015, is days away from dropping below $4 trillion. Why stop it?

According to Bloomberg, the Fed wants to be more “flexible” in “shrinking their holdings of Treasuries and mortgage-backed securities, depending on the economy.”

“In November of 2017 – about nine years after the first expansion – the Federal Reserve finally began a very slow process of balance sheet reduction, i.e. “quantitative tightening”. There were no asset sales (which might require recognition of some of the fantastic losses currently hidden on the Federal Reserve balance sheet), but the Fed stopped replacing assets as they matured…”

“…the Federal Reserve balance sheet shrank by about $400 billion over the next 15 months.

However, there was a problem – the markets couldn’t handle even that very slow retreat from the fantastic and the abnormal. The creation and spending of money by the trillions for governmental purposes without going through taxation – which was supposed to be a very temporary anomaly to be used in only the most dire of emergencies – had over the years become normal, and then a foundation of elevated market valuations, where this extraordinary intervention could not be withdrawn without precipitating a crash in the markets that had become dependent upon it.”

Amerman and others, including legendary money manager Ray Dalio, understand that the Fed is now focused on supporting “elevated market valuations,” not just countering the threat of a recession.

Unlike in previous monetary policy loosening cycles, asset prices are already inflated. We are in a brand-new world.

If the economy, more specifically US GDP, continues to rise the way it has been for the past 50 years, a new floor of $4 trillion on the Fed’s balance sheet may be acceptable and even manageable. We are talking about the US economy here – valued at $20 trillion annually.

Granted, much of the US economic growth has been debt-fueled since the mid-2000s, but it is still growing (and at an impressive clip for much of 2018).

In the West and China, debt has become a part of life, even the sustenance of life for some.

It is time to admit the Fed has masterfully managed an economy addicted to debt. Expect interest rates to remain accommodative for the foreseeable future as growth slows. The Fed’s days of deleveraging may be numbered, but that doesn’t mean the economy is on the fritz or a crisis is around the corner. In fact, it may mean quite the opposite.

We may be nearing another round of QE in the next 12 months, which essentially acts as a liquidity event. It could also be very bullish for commodities, namely gold. However, like many stimulants, it’s never quite as strong as the first time…