During the boom years for the TSX Venture, which included the mid-2000s through to the crash of 2008 and the following resurgence of 2009-2011, Chinese demand for raw materials drove billions of speculation-capital into Canada’s small cap market. Since then, fear (which peaked in late-2015), largely due to a slowing Chinese economy, drove the exchange into historically low, and oversold, territory.

The TSX Venture index is up over 20% since hitting an all-time low on January 20th. Despite China’s GDP slowing to a 25-year low of 6.9% in 2015, expansion, which is being led by a consuming, growing middle-class, continues. This is very important for North American investors to understand as China and India will continue to provide a solid base of demand for many raw materials; the global economy, and many TSX Venture companies, rely on this demand.

The IMF forecasts that China’s growth will stabilize in the coming years slightly above a healthy 6%: 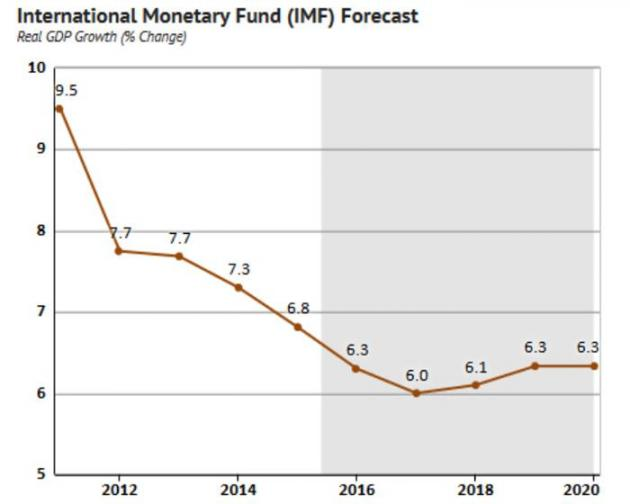 As growth stabilizes, China’s identity as a manufacturing hub will evolve. This transition will be facilitated by its own domestic demand picking up, and the solidification of a true middle class…

Stats on China’s rising middle class are nothing short of mind-boggling as it passed the United States for the largest middle class in the world this past October. An Ernst and Young article titled China and India: tomorrow’s middle classes, predicted some bold data points:

“…we expect as many as 500 million Chinese could enter the global middle class over the next decade. By 2030 around one billion people in China could be middle class – as much as 70% of its projected population.”

China’s middle class is characterized differently than America’s at the moment. To be above the poverty line in China, one must make at least USD$2.25 per day. The middle class consists of those making approximately $40-$100 USD per day. We are talking about hundreds of millions of people potentially achieving such a wage in a nation that is relatively cheap to live. CNN reported, “There are 109 million Chinese with wealth of between $50,000 and $500,000.”

America’s middle-class barista of choice, Starbucks, is planning to open 500 stores in China every year for the next five years, according to The Wall Street Journal. China’s service sector is exploding and multi-nationals are rushing in to capitalize.

The TSX Venture has rebounded more than 100 points since its January 20th low of 466.43 – a proportionally historic rally in less than two months.

Largely led by gold stocks (with select uranium and lithium juniors helping the cause) the Venture is in a technical bull market. When determining if a bottom in oil, copper and other commodities may be in, a look at the Baltic Dry Index (BDI) is always worthwhile. In years past we’ve highlighted the correlation between the BDI and the Venture.

The BDI is a great barometer of real demand for commodities around the globe as it tracks the price of shipping raw materials, including metals, grains, and fossil fuels across various trade routes on three different sized merchant ships – Capesize, Supramax and Panamax.

Obviously, demand for raw materials is closely tied to economic activity. When demand perks up, shipping prices increase, sometimes even before commodity prices do. For these reasons, the Baltic Dry Index has long been thought of as a leading indicator for economic recessions and commodity bull markets. It accurately forecast the past three major market crashes, including 1987, 2000 and 2008. In 1986, the index hit its first all-time low; in 1999 it hit a 12-year low, and then in 2008 it fell from above 11,000 to roughly 780. After rebounding to nearly 2,500 at the beginning of 2014, the BDI hit a new all-time low of just 290 this February.

Now, the BDI, which we wrote about in an early-February Weekly Volume titled Canada’s Economic Nightmare Now Reality, is rebounding.

The Baltic Dry Index climbed to a 5-week high of 396 last week, “as some market players expressed intentions of acquiring tonnage at 30-year low prices…” according to Ship and Bunker.

Seanergy Maritime Holdings is one of those companies…

“We firmly believe that current market conditions represent a unique opportunity to acquire quality tonnage at 30-year historical low prices. For that reason, we intend to pursue acquisition opportunities that we believe can further enhance value for our shareholders.”

Seanergy is not the only group seeing a bottom in commodity prices or looking to lock up raw materials for future consumption. Karnalyte Resources is a TSX-listed potash developer based in Saskatchewan that you had probably never heard of… until last week. Below is the 5-day chart, beginning on Monday last week. 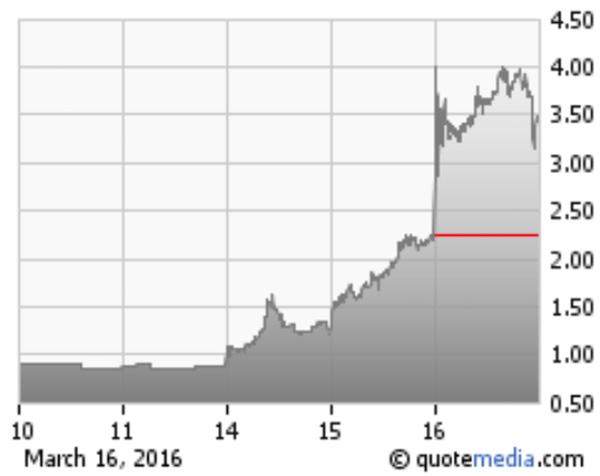 What could create such a rapid increase in value? Gujarat State Fertilizers & Chemicals Limited, an Indian manufacturer of fertilizers and industrial chemicals, agreed to, in principle, “finance construction of the first phase of Karnalyte’s 625,000 tonnes per year (tpy) potash mine at Wynyard, Saskatchewan (“Phase 1″).”  This equates to approximately $700 million in financing (full press release here). Up until Monday, Karnalyte was like so many TSX and TSX-Venture resource stocks: relatively quiet for many months. Since the news on Monday, its market cap has increased from about $24 million at the close of trading on March 11th to over $100 million the following week. Again, China and India have to secure raw materials and fertilizer to guarantee healthy crop yields for their emerging middle classes. Karnalyte is another company benefiting from this narrative.

As the global currency war rages, and China entertains yuan devaluation, the Fed will avoid any further rate hikes to prevent an appreciating USD. Commodities and other assets have the potential to be inflated. Cash has the potential to be eroded and some investors are stepping into these commodity markets to lock in buying power now. The rising Baltic Dry Index is proof of that.