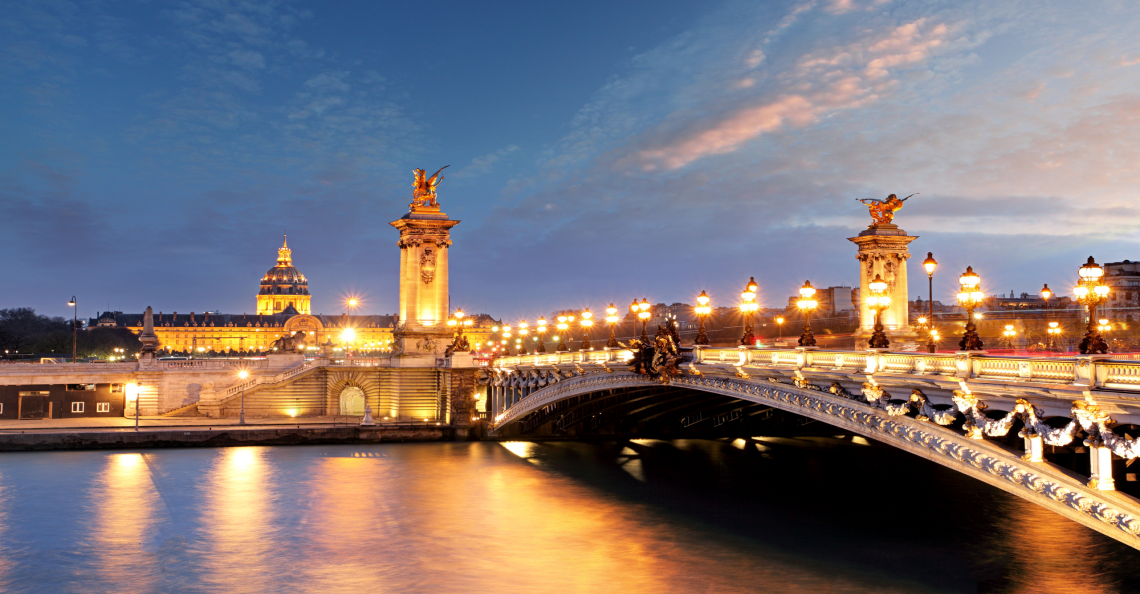 Gold had its biggest single-day decline in over a month Monday after establishment candidate Emmanuel Macron won the first round of voting in France. He was followed by the anti-establishment, populist, far-right candidate Marine Le Pen. Today I will argue why, long-term, Macron winning may be more bullish for gold.

It is not usually the outcomes, but the interpretation of the outcomes by the markets that are most intriguing.

The threat of Le Pen winning and, in turn, moving France out of the E.U. appears to have been neutralized for the moment; but, what many in France have yet to understand is that a vote for Macron is in many ways a vote for Sarkozy or Hollande – the two previous French President’s. If this perspective changes between now and May 7th, Le Pen may find a way to upset Macron.

When demand for gold is high, risk and financial instability must also be high. Nicolas Sarkozy was the President of France between May 2007 and May 2012. Francois Hollande succeeded him in May 2012 and will leave office next month following the final round of voting.

Emmanuel Macron knew it would be political suicide to run under Hollande’s banner, so he took action. As a member of Hollande’s socialist party between 2006 and 2009, he was appointed deputy secretary-general in 2012 when Hollande ascended to the Presidency. In 2014, he was appointed Minister of Economy, Industry and Digital Affairs, where he pushed through business-friendly reforms.

Knowing the die was cast, Macron quietly resigned from the hated socialist party in August of 2016. By November of 2016, six months ago, he declared he would run for President under the banner En Marche!, which was founded one year earlier in April of 2016. Convenient for Macron, it is a centrist political movement with no affiliations to the left of right. Is this guy a perfect politician or what?

No matter how you look at it, the past ten years was not a good decade for France. Government debt to GDP has exploded and is nearing 100%.

Why would Macron be able to do any better than his predecessors? He comes from Hollande’s party after all. France’s economy has been struggling, with anemic growth below 2% for years.

Would rising debt and slowing growth not make the system even more susceptible to collapse. The next financial crisis is looking France in the face and investors will turn to gold when it erupts.

One of my favorite books that I often remember in times like (out of control deficit spending) is This Time Is Different: Eight Centuries of Financial Folly, written by Carmen M. Reinhart and Kenneth S. Rogoff.

In the book, the authors go into great detail surrounding the negative association between debt and growth. In a 2013 article titled The 90% question, they explain,

“They found that public debt has little effect on growth rates until debt reaches 90% of GDP. Growth rates then drop sharply. Over the entire two-century sample (from 1790 to 2009), average growth sinks from more than 3% a year to just 1.7% once debt rises above the critical level. In a shorter post-war sample the decline is more dramatic; average growth drops from around 3% to -0.1% after the 90%-of-GDP threshold is attained.”

France’s next election is not for five years. Macron is the establishment vote. His main occupations have been senior civil servant and former investment banker for none other than Rothschild & Cie Banque. He landed the job after studying Philosophy at Paris Nanterre University and working as the Inspector of Finances at the Inspection generale des finances of France. It’s basically a high-end IRS. The idea that he has been able to shape himself as a man of the people or a man that wants or can bring change is actually amazing. It speaks to his abilities and the millions of French people who are either incredibly naive or simply do not desire change. Will the French people all simply forget that he was previously a close adviser and minister of the current head of state? Perhaps.

With two weeks to go until the May 7th election that will decide France’s next President, it appears all Macron has to do is show up.

With the first round of voting behind us, the country of France has two candidates remaining. Deep down everyone knows Macron is more of the same, but sometimes, as the saying goes, it is just easier to vote for the devil you know than the devil you don’t.

Here is a quick summary of the other main parties and why the polls have Marine Le Pen getting crushed on May 7th.

Can Le Pen Steal some of Fillon’s Centre-Right Voters?

Francois Fillon, who previously served under the past President Nicolas Sarkozy, finished Sunday with 20% of the vote or about 7.2 million votes in third place.

The Republicans, as his party is known, is the largest centre-right political party in France, but its party followers have become so disenchanted by past administrations (France’s former disgraced President Sarkozy hails from the Republican party), not enough showed up to support Fillon. With that said, the ones who did will likely lean in Macron’s direction as they are clearly establishment voters.

Just by adding Fillon’s 20% to Macron’s 24% already puts the former investment banker at 44% of the popular vote – just six points from the magic number of 50% which would lock down a majority. Herein lies Le Pen’s mountain to climb. The caveat to remember is that technically speaking, Fillon’s party is right of center. While he is closer to Macron’s centrist party, it would be foolish to think that none would side with Le Pen who represents a strong right candidate.

Melenchon’s “France Insoumise” to the Rescue?

She will get some help from the fourth place finisher Jean-Luc Melenchon’s voters. His party is known as the “France Insoumise” (Unsubmissive France) coalition and is backed by the French Communist Party. Yes, he is the communist of the group. Think of Melenchon as the Bernie Sanders of the group. Remember all those Bernie Sanders supporters that were supposed to show up and vote for Hillary… exactly. These voters are anti-establishment.

After running in the 2012 French presidential election, where he garnered 11.1% of the votes, Melenchon put up a solid 19.8% in the first round, less than a few hundred thousand votes behind establishment candidate Fillon. The French are clearly upset if they have turned to a party embraced by communists. Again, Melenchon is a far left anti-establishment candidate that is gaining momentum. Look back to 2012 and Marine Le Pen’s Front National party scored 17.9% of the vote. This time around 21.3%. Do you see the trend? Le Pen and Melenchon are gaining momentum. While she won’t get all of his votes on May 7th, she’ll likely get the majority.

Melenchon is a populist candidate who has shown opposition to the Euro and the European Union’s budgetary restraints.

The final two parties that may ultimately determine France’s next President are Benoît Hamon, the candidate of the ruling Socialist Party and Nicolas Dupont-Aignan the leader of the Debout la France.

Hamon’s Socialist Party received 6.4% of the vote or nearly 2.3 million votes, while the Debout la France came in with 4.7% or nearly 1.7 million votes. Expect Hamon’s 6.4% to go for Macron as they are clearly establishment type voters. Of course, this spells bad news for Le Pen as it would take Macron to that magic 50% number, assuming he gets all of Fillon’s 20%. But, here is where it gets interesting:

Debout la France (4.7% of the first round voting) is a member of EUDemocrats, a eurosceptic transnational European political party. One of Dupont-Aignan’s main themes is anti-EU, the same as Le Pen and Melenchon’s supporters.

For the sake of assessing Le Pen’s actual chances, which could potentially end the euro zone and be very bullish for gold in the near term, let’s do some quick math. First, take her 21.3% from the first round of voting and then add the populist Melenchon’s 19.8% along with Dupont-Aignan’s 4.7%. The total is 45.8%. Still not at 50%, but we are moving towards the 3% margin of error.

Le Pen, Melenchon and Dupont-Aignan lead three parties that have either an aversion to the EU or the current establishment. The only other candidate of mention that may play a small role is Jean Lassalle who came in 7th with 1.2% of the vote or nearly half a million votes.

Lassalle is an interesting character and ran in the 2017 election under the banner of Résistons. Lassalle undertook a 39-day hunger strike back in 2006, in protest at a threat to jobs in his constituency. He is passionate about nature and since 2002 has led the World Mountain People Association, an international network of mountain-dwellers active in more than 70 countries.

So, as you can see, even with the votes of the three parties that are clearly not for the establishment, Le Pen will not reach the 50% mark. While everyone assumes Fillon (20% of the vote) and Hamon (6.4%) will go for Macron, if a significant percentage realize they are just voting for Hollande under a different banner, perhaps things may not go as planned.

If one thing is certain, the French people want change. For the first time in nearly 60 years not a mainstream left or right-wing party was able to reach the final round of voting. Le Pen is going to spend the next two weeks exposing Macron as the establishment candidate. If Macron would have run under his former Socialist Party (PS) he would have lost. This is a fact few would deny. With the mainstream media and establishment money flowing into Macron’s camp, Le Pen has a tough road to the Presidency.

While many have been turned off by some of Marine Le Pen’s nationalist rhetoric, much the way many voters were turned away from Trump, she is an alternative to the mean. This is undeniable. Of course, she is not the perfect candidate, but she represents change.

At the end of the day, Macron is nothing more than an elite neo-liberal. He is a former Rothschild banker and graduate of one of France’s most prestigious Universities in the Ecole Nationale d’Administration. He advocates corporate tax cuts and can in no way relate to the common man in France. The election is not over as the polls suggest, but Le Pen will need some serious luck and every last vote to pull off the upset.

I’ll leave you with the below video that documents Marine Le Pen’s rise in ‘forgotten France’.