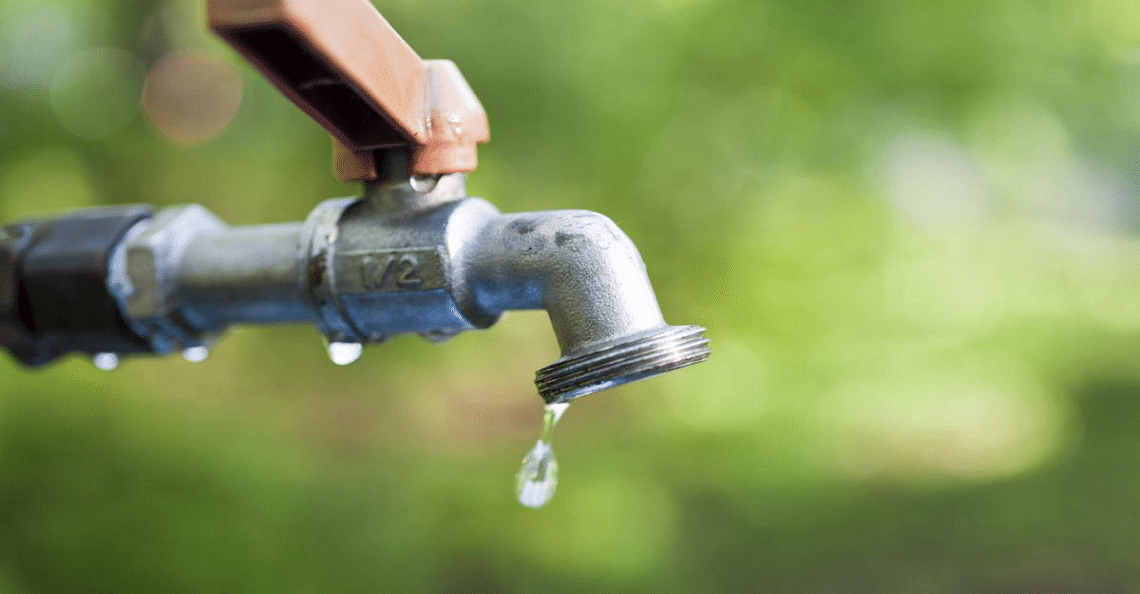 The behavioural and psychological changes spurred by Covid-19 are behind the increased liquidity and once unimaginable valuations on North American stock exchanges. Market sentiment is now at the highest levels ever due to a combination of factors.

In this report, we’ll explain four reasons why the pandemic, and retail investors at large, are responsible for the incredibly bullish movements seen in the markets as of late:

A report released by Qustodio shows a dramatic spike in screen time since the onset of the pandemic in March 2020. According to Qustodio,

“In the U.S., where there is a partial lockdown and social distancing methods differ on regional level, Qustodio analysis shows a 95% increase in screen time since the first school closures in the nation on March 16.”

An eMarketer article from July of 2020 titled, “The Pandemic Is Accelerating Time Spent with Mobile Video and Gaming,” further highlights the increasing use of screens:

“Jun Group, a mobile ad firm that places 85% of its ads within mobile games, saw in-app audience ad requests jump 98% between March 12 and April 5. Although this doesn’t necessarily indicate a doubling of time spent among mobile gamers, it does signify a substantial increase in mobile gaming.”

Now, you may be asking yourself: what does increased screen time have to do with investor speculation?

Well, a critical factor driving Canadian stock valuations is the digital news cycle. Once occupied with their work, sports, and social life, people with disposable income are now without those activities and have substituted them with learning about assets such as US equities and Bitcoin online – both of which are at or near all-time highs. For millions of Canadians spending more time online, financial market headlines create a super variant of FOMO or “fear of missing out.”

Widely publicized, parabolic surges in value like that of Bitcoin’s contribute to an investment culture that prioritizes fast gains above all else. With stories about Bitcoin and Tesla dominating the digital press, we are seeing rampant speculation in multiple sectors in search of similar returns.

As interest rates fail to outpace inflation and the value of Canadian real estate sits at record highs, many investors feel the stock market is where opportunity lies.

The wealth effect — driven by record-low interest rates and inflation — gives many homeowners an extra sense of prosperity. So, as homeowners get richer on paper, they may be incentivized to pour excess capital into the markets in search of yield.

The third factor that could be driving Canadian markets to multi-year highs is the record amount of cash being hoarded amid the pandemic.

Towards the end of last year, the Financial Post published an article that highlighted this phenomenon, writing,

“Frugal Canadian households and businesses have accumulated a minimum of $170 billion in excess cash throughout COVID-19 and are currently sitting on the largest cash hoard in recorded history, according to CIBC.”

We believe some of this excess capital is pouring into Canada’s junior markets (TSX Venture and CSE).

In other words, the TSX Venture saw a 4X increase in liquidity for December 2020 when compared to the same month in 2019. 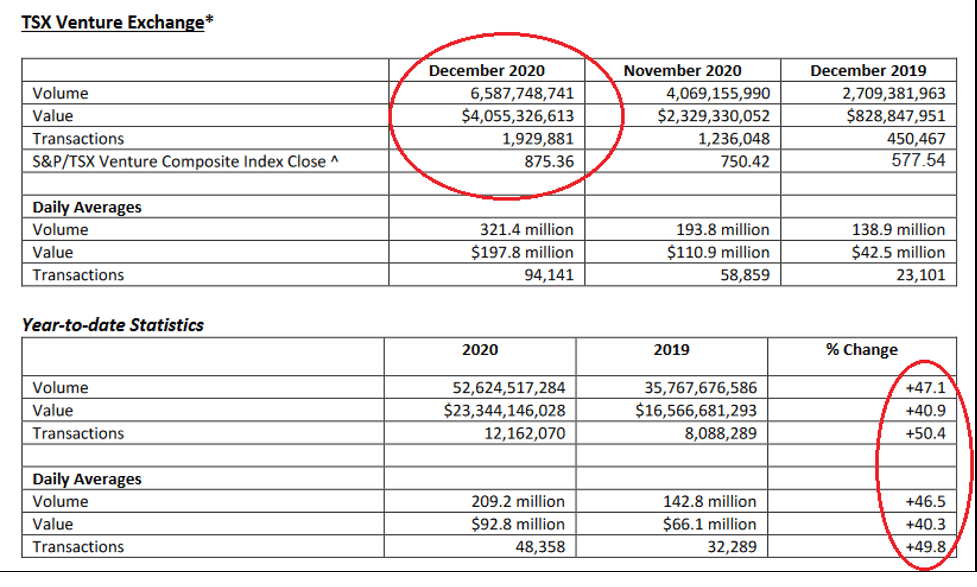 Liquidity and valuations also soared on the CSE, Canada’s other junior market.

The final potential factor driving valuations in the US and Canada is the influx of new investors. These are investors who began speculating on the markets during the pandemic for one reason or another, whether it was the opportunity to profit from the economic downturn or a remedy for quarantine boredom. This theory offers a possible explanation for the wide distribution of capital across multiple sectors, including psychedelics, gaming, cryptocurrency, cannabis, health and wellness, tech, and, of course, mining.

One possible problem, however, is the fact that hundreds of thousands of these investors (many of which are aged between 20 and 40) have never experienced a true bear market. After all, how could they? US equities have been in a bull market since early 2009. This suggests that any prolonged decline in the markets may result in a rapid loss of confidence and/or significant financial hardship for these investors. We can only hope they are not playing on margin.

According to a recent Citi Panic/Euphoria model shared by Zerohedge, positive market sentiment is at its highest level ever recorded. While the below graph does not include data from the roaring 1920s, it’s safe to say today’s investors are in an unprecedently euphoric state. 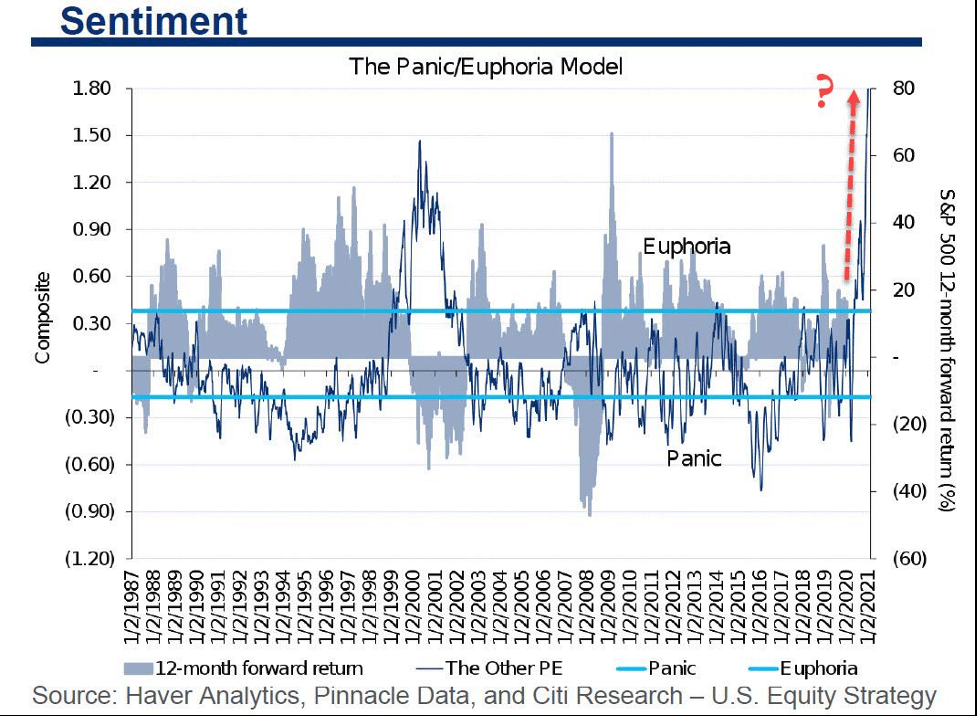 With Biden touting a near US$2 trillion stimulus plan and central banks and other governments remaining accommodative, it seems positive market sentiment will remain in place, enabling the market to continue its rise.

Read The Globe & Mail’s recent report, titled, “Governments must ‘spend as much as you can’ to revive economies, IMF chief urges”

However, when everyone seems to think something is inevitable, it usually isn’t… or at the very least, is on borrowed time.