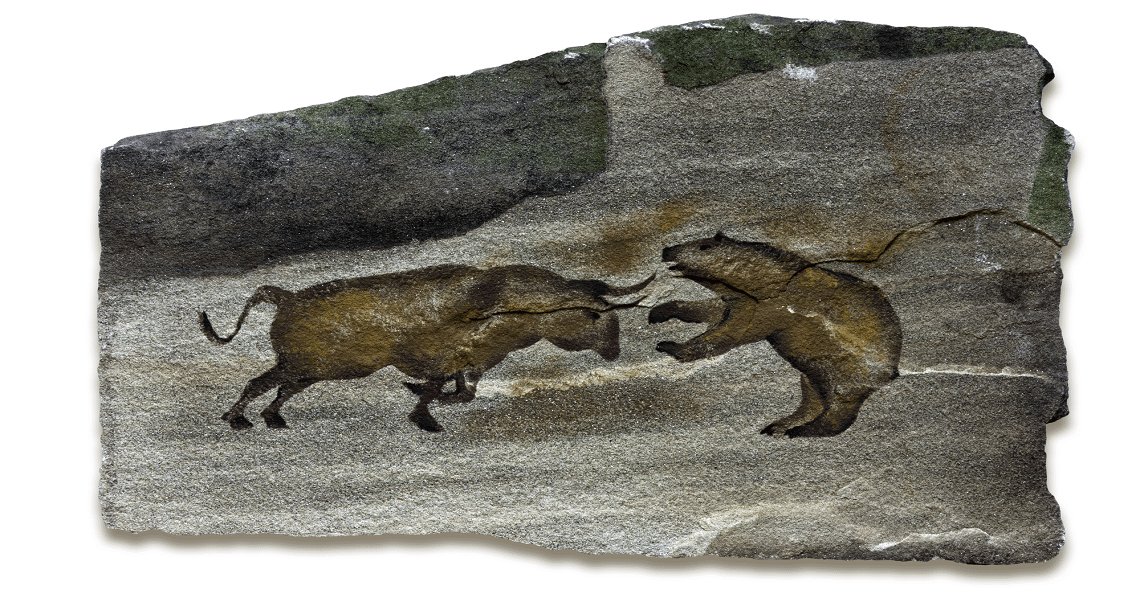 The TSX Venture is enjoying a speculative buying frenzy across multiple markets. I haven’t seen this level of speculation on the Venture in a long time. And I can’t remember ever seeing it across so many sectors. From health and wellness to gaming, psychedelics, and even cannabis and gold – speculators are bidding up TSX Venture and CSE-listed deals.

After hitting 338 in March of 2020, the Venture is knocking on the door of 800, closing at 791 Tuesday. After years of watching wild speculation on the NASDAQ, it appears to finally be spilling over into Canada’s small and micro-cap markets. Let’s look at four deals to see where sentiment is taking valuations in these hot markets.

Let’s start with Clean Power Capital Corp. (CSE: MOVE)(FWB: 2K6)(OTC: MOTNF). The company focuses on the health and renewable energy industries. It benefits from the rise of ESG investing, a sector we documented at length in The Shocking Momentum Behind ESG over the weekend.

While the company has traded as high as $1.99 this year, its 52-week low is just $0.05 per share. Like most of the deals I will share today, Clean Power came out of nowhere a little over a month ago. 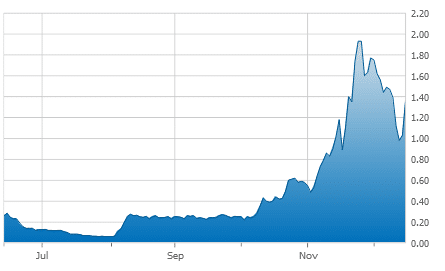 “The Company is pleased to announce that its investment, PowerTap, plans to participate in the California Low Carbon Fuel Standard (“LCFS”) Carbon Credit program. California’s LCFS market may be one of most unique Carbon emission credit trading program, reflecting California’s commitment to greenhouse gas reductions. The LCFS Carbon Credit program provides PowerTap an opportunity to generate revenue even before dispensing any hydrogen from its fueling stations by allowing PowerTap to sell its earned LCFS credits on an on-going basis on the emission trading markets.”

With Biden set to take office, investors position themselves for an America more focused on clean energy. Clean Power’s rise and the flood of capital finding its way into the ESG market, are examples of that.

The next deal trades on the CSE and is in the red-hot gaming sector. The prevailing logic, which is proving accurate, is that as people stay home during the pandemic, they are more likely to participate in online gaming experiences and watch the esports competitions.

ESE Entertainment (ESE: TSXV) has come alive in recent weeks. A company that traded for just $0.17 earlier in the year, is now on fire. On Monday, December 14th, they hit $1.97 on volume of more than 2.3 million shares traded. With 3,513 individual trades on the day, the company was among the most liquid on the entire CSE. In late November, the company had three consecutive trading days where the number of individual trades was just 8. The company’s market has seen more than 8,000 individual transactions in the past four days. The company’s stock chart is something to behold: 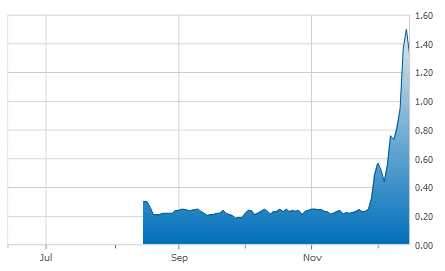 According to the company, “ESE Entertainment is a Europe based entertainment and technology company focused on gaming, particularly on esports. ESE consists of multiple assets and world-class operators in the gaming and esports industries.”

The gaming sector is taking deals from pennies to dollars as investors rush into these young stories.

Next up is Numi, Numinus Wellness

Numinus Wellness trades on the TSX Venture under the symbol ‘NUMI’. Numinus describes itself as “a mental health and wellness company creating an ecosystem of solutions centred around safe, evidence-based, accessible psychedelic-assisted psychotherapy to help people heal and be well.”

Again, psychedelics are a relatively new industry and find themselves amid their second breakout as a sector. Numinus hit a high of $2.46 per share Tuesday as its market cap swelled to over $250 million. The company traded for just $0.19 a few months ago in August. 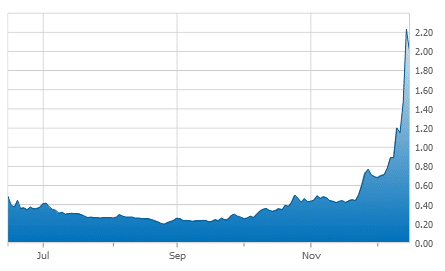 Numinus put out news on Tuesday morning, announcing a national expansion with the acquisition of Montreal-based Mindspace Wellbeing, a full-service well-being Organization and Pioneer in Psychedelic Programming, according to the company.

“The agreement brings together the capabilities of two leading Canadian organizations to develop and scale delivery of evidence-based psychedelic-assisted psychotherapy to provide the highest quality patient outcomes.”

TAAT™ Innovates with ‘Beyond Tobacco™’

The CSE continues to be a leader in innovative deals from the cannabis sector to psychedelics to tobacco-free alternatives to tobacco-cigarettes. Despite fewer people smoking, CSE-listed TAAT™ Innovates values the global tobacco industry at USD $814 billion in its latest press release from December 11th.

In a December 11th press release, the company explains its offering,

“TAAT™ is a nicotine-free and tobacco-free alternative to tobacco cigarettes that has been developed to closely mimic the experiential components of smoking legacy tobacco products. The company has developed Beyond Tobacco™, the base material of TAAT™, which undergoes a 14-step production process to include a patent-pending refinement technique causing the material to have a taste and smell similar to actual tobacco.”

TAAT Lifestyle & Wellness was trading under $1 per share in September, but hit a high of $4.41 shortly thereafter. 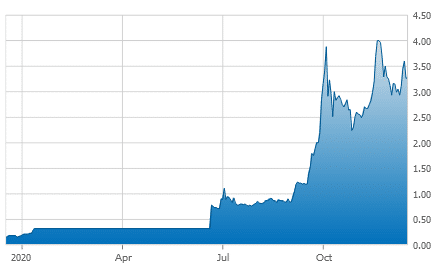 On December 11th, TAAT™ Chief Executive Officer Setti Coscarella commented, “We thank the Group for their continued support of TAAT™ as a vision to provide our consumers around the world a better choice without nicotine or tobacco. We are currently launching TAAT™ in Ohio where we have received considerable interest in the product, which will be available for purchase at retail in Q4 2020.”

TAAT has only had one day in the past 24 trading days that did not see more than $1 million in shares exchange hands. A little over $6.8 million exchanged hands on November 20th, and millions in buying continue to come into this story – often daily.

Where is Liquidity and Speculative Buying Coming From?

So, where is all this liquidity coming from? While hard to know for sure, we continue to witness a surge in online discount brokerage accounts. I believe millennials and, to a lesser degree, Generation Z, the newest generation to be named, which includes those born after 1997 – currently between 8-23 years old, there are nearly 68 million in the U.S., are leading this charge.

Free-trading apps like Robinhood appeals to a younger trader mindset and allows investors to trade stocks, options, and cryptocurrency without paying commissions or fees. Check out the data below:

Volume on the TSX Venture has exceeded 100 million total shares traded in 7 of the past 8 trading days. On December 9th, the exchange saw 160 million shares trade hands – this is a massive increase from years past.

Investors are forgoing private placements and instead are buying in the open market as seasonal weakness takes hold and investors opt for liquidity.

Total financings on the TSX Venture continue to decline as 2020 comes to a close. One can point to gold prices falling off (miners still represent more than 50% of issuuers on the TSXV), but seasonality factors are also playing a role.

According to TMX Money, October saw $634,831,652 million in total financings raised on the TSX Venture, significantly less than September’s $801,242,260. November saw another stark decrease, falling to $406,110,973 in total financings on the month. I expect December to be around that number before ramping back up in January.

Despite the decline in financing dollars, liquidity and speculation is surging on the TSX Venture and CSE. As is often the case, buying is concentrated on a handful of deals but spans several sectors – something not often seen on the exchange. With banks continuing to offer no yield for savers, we continue to witness individuals who would otherwise not speculate in juniors stepping into these markets. Furthermore, as people forego travel, many in Canada and are seeing their savings pile up, providing excess capital for speculation.

The Bank of Montreal confirmed as much, when in early December the Financial Post reported that BMO “…estimates that ‘excess savings’, that are above and beyond what would have been normally expected, reached an astronomical $150 billion, or about 7 per cent of GDP by the third quarter.”

“That is a serious cash hoard that could heavily support overall activity in the year ahead.”

Serious, indeed. I’m willing to bet, as U.S. markets continue to hit all-time highs, some of these savings are surely fueling speculative buying on Canada’s small and micro-cap markets.