Governments have turned on the big banks, leaving them to fend for themselves, in an attempt to save the voters who uphold their very existence. You see, the economies in many parts of the developed Western World have such anemic growth and are so crippled with debt, that the governments which run them can no longer protect their big banker friends. Just look at Deutsche Bank, which put up a record loss last year; the company’s share price has fallen well over 50% in the past 12 months and has reportedly shut down 1 out of every 4 of its branches. This is by far the most important bank in Germany, the undisputed economic engine of Europe. Bank losses or massively declining profits can be seen across Europe…

As banks reel under declining profits and falling stock prices, it is becoming painfully obvious that these behemoths are having difficulty making profits with interest rates at zero. Governments (through central banks) have taken interest rates negative in a desperate ploy to spark growth and increase consumers’ willingness to spend. The wake up call and where the TSX Venture comes in, occurred when negative rates went mainstream and gold started bouncing at the beginning of this year. Holding your own country’s currency in a bank has become a losing strategy. This reality is giving money managers a difficult time with bonds (which are at record highs) thereby forcing their hand to play the market.

According to Case-Schiller, U.S. home prices were up 5.2% in May year over year… David M. Blitzer, managing director and chairman of the Index Committee at S&P Dow Jones Indices, commented Tuesday that:

“Overall, housing is doing quite well. In addition to strong prices, sales of existing homes reached the highest monthly level since 2007 as construction of new homes showed continuing gains.”

This is despite wages remaining stagnant and a record 94,708,000 Americans reportedly not in the labor force in May. With the labor force participation rate at 62.6%, near its 38-year low, one has to wonder why house prices continue to gain.

Emerging Global Advisors’ (EGA) latest Emerging Markets (EM) Investor Sentiment Survey shows sentiment increased 28% from 538 in the first quarter of 2016 to 687 in the second quarter of 2016,according to WealthAdvisor.

This is a significant increase and one I believe is the beginning of a trend as investors across the developed world put their money to work in international and emerging markets to escape weak growth at home. In particular, this could be good news for Canadian stocks as U.S. investors, bolstered by a strong U.S. dollar look north to invest for yield.

This is perhaps a key reason the TSX has outperformed so many indices around the world in 2016. Despite oil continuing to languish in the low-$40s, the TSX is approaching a 1-year high and has been on fire in 2016. 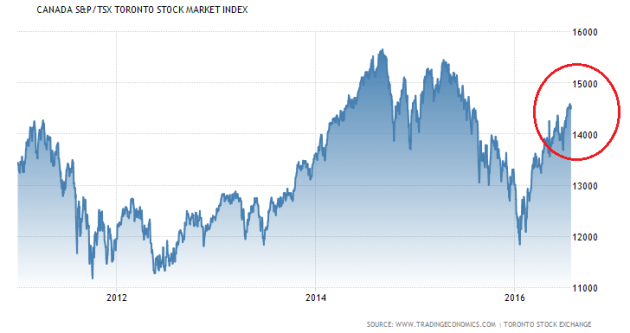 The TSX Venture, not the TSX or any other exchange, has been the best-performing exchange throughout the world thus far in 2016. The world’s junior resource exchange is up well over 50% and on pace to have its best year since… 2009 or 2010. While the Venture closed near its high of the day at 770 – Venture stocks are likely poised for continued gains in 2016.

Negative rates have given pause to a world searching for yield and has refocused many investors on more risky emerging markets along with precious metals and commodities. Look at the demand for gold to back ETFs and the rush of physical buyers following Brexit if you want proof. It is hard image an exchange or country that could potentially benefit more from this emerging trend than Canada, the TSX Venture, and its vast resource sector.