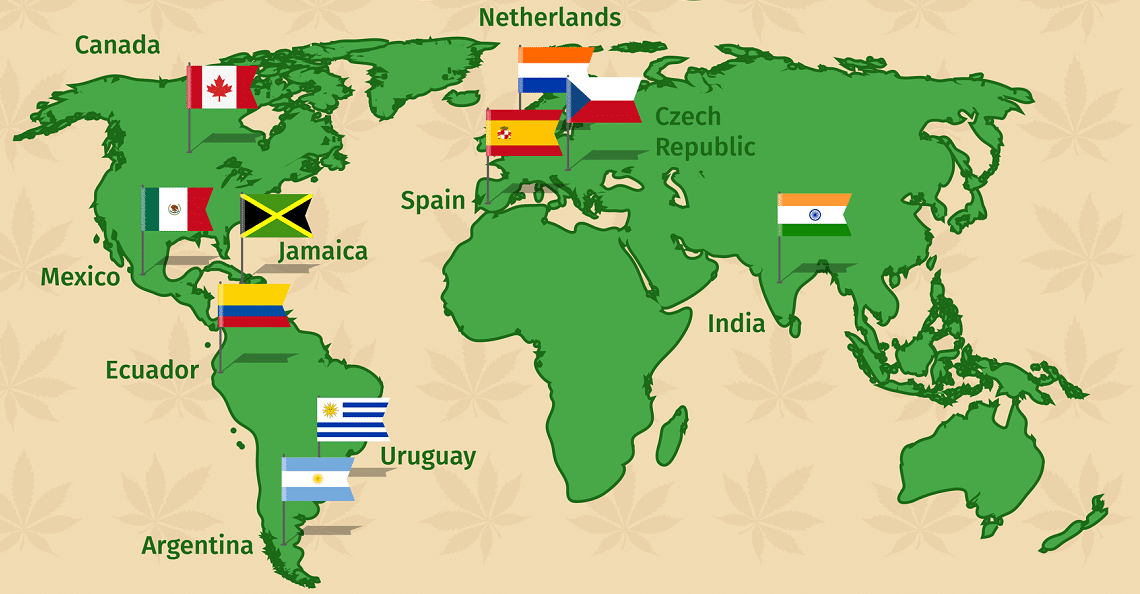 Weed stocks are, once again, infatuating investors across Canada. For years we have been correlating not only the performance, but much of the total volume on the TSX Venture to investment in marijuana stocks. We’ve timed runs, called tops and been in and out of numerous marijuana-related stocks for the past half-decade or so. With some of Canada’s marquee names in the sector hitting new all-time highs in June, we are softly warning investors to proceed with cautious optimism.

Consolidation is afoot (which can be deemed a positive), but smart money appears to be selling as the largest deals enjoy soaring market caps, while the Canadian Marijuana Index (CMI) has been range bound.

On June 7th, Canada’s Senate voted to pass Bill C-45 which will legalize recreational weed (expected to take effect in the fall). After trading down following the highly anticipated successful vote, the Canadian Marijuana Index is up roughly 7% on July 5th when compared to its close of 589 on June 27th. Unsurprisingly, the TSX Venture (Canada’s small-cap exchange) is performing in virtual lockstep to the marijuana index.

Note: With gold and silver collapsing, interest in the mining sector, outside of the odd cobalt, graphite or lithium play, remains historically low.

Keeping the current run in context is important. Excluding a few larger names, which have broken out again recently, the majority of Canadian weed stocks are down significantly from their highs in early January. The CMI (Canadian Marijuana Index) is still off close to 38% from its highs of late-2017. However, many of the country’s largest or most well-known marijuana players are at or near all-time highs.

The valuation of the entire Canadian Marijuana Index sat around $26 billion as of Thursday afternoon. While the index has been a great monitor of performance for the sector, with many marijuana stock charts mirroring its move, we believe a consolidation phase is upon us.

In January, Alberta-based Aurora Cannabis and Saskatoon-based CanniMed Therapeutics agreed to terms where Aurora would purchase the company in a deal valued at $1.1 billion. Although the transaction is still the largest marijuana deal in Canadian history, we believe there is more to come.

Terry Booth, CEO of Aurora, stated at the time,

“We are very pleased to have come to terms with CanniMed on this powerful strategic combination that will establish a best-in-class cannabis company with operations across Canada and around the world.”

Aurora CEO and Other Weed Stocks Focuses on Global Expansion

Aurora, not unlike like many other weed stocks, is off roughly 38% from its high of $15.20 in January.

Notice the last three words in Mr. Booth’s quote, “around the world.” The majority of Canadian-based marijuana companies, especially the major multi-billion dollar names, will need massive international exposure to grow from (or perhaps even justify) their current market caps. Just like in Colorado, once sufficient supply comes online, we believe prices will correct and the market will be in a supply glut. Furthermore, the Canadian market is simply too small for the current number of players… more on this shortly.

While a correction in the space appears to be coming, there are reasons to be cautiously bullish as well. Large financial institutions (not just the boutique brokerages anymore) searching for value and yield are moving into the sector now that recreational use will be legalized. And they aren’t the only ones… Beer and liquor companies are getting in on the action.

As you may be aware, Constellation Brands Inc., the owner of the famous summer time beverage Corona beer, paid about about C$245 million for nearly 10% of Canopy in October of 2017.

Last week, on June 29th, Constellation said its minority investment “has already realized a gain of more than $700 million,” according to Bloomberg.com. That kind of gain has a way of attracting others…

Constellation is not a unicorn in the alcohol space. Beer companies are not going to miss out on the weed renaissance as the plant is expected to take a notable chunk out of liquor purchases (we wrote about this in 2016). Expect M&A, along with strategic investments, to pick up, fuelling consolidation and bullish speculation on the bigger names in the months ahead.

“The liquor lobby is also one of the major opponents of legalizing marijuana, particularly for recreational use. And it’s for the same reason as Big Pharma: competition and fear of market share loss.”

Institutions Warm up to Weed

In January, the Bank of Montreal became the first of the “big five” Canadian banks to invest in the space when it co-led a $175-million bought deal for Canopy Growth – Canada’s largest marijuana company by market cap.

Cronos is another large TSX-listed marijuana stock, with a market cap of around $1.6 billion.

In April, BMO named a marijuana analyst to its team as the firm scours the space for more deals.

First movers and name brand companies in the space are being rewarded with huge checks from institutions and breathtakingly high multi-billion dollar market caps. Much of this valuation is built upon perceived, future growth. Future revenue, future sales. Speculation. And because they’ve been given favourable speculative value, many of the large marijuana issuers in Canada are likely looking to swallow up smaller companies in the near term. That is the bullish case for the marijuana space right now…

Question is, do the potential acquisition targets (call them the mid-tier players) maintain their valuation throughout the summer, go higher, or drop by the time a suitor comes knocking?

“I believe the incredible tailwinds blowing at legal marijuana’s back make it so the opportunity here is much like the one internet stocks offered in 1994… or the one bitcoin offered in 2015.”

The majority of internet stocks ceased to exist in the years following the dot com bust. On bitcoin related deals, not to mention the digital currency itself, valuations have tanked since the buzz of late 2017 and early 2018 wore off. Comments such as the one above should give pause to investors.

It is this unbridled enthusiasm, combined with constant mainstream media coverage, which has some marijuana stocks reaching for the sky – arguably entering bubble territory.

As the cycle matures and recreational legalization prepares to hit the streets, mom and pop investors from all over are pouring into the space. As is often the case, it appears many are flooding into the largest, most established names, including Canopy Growth and MedLeaf. Although sometimes a winning strategy (buying the ‘brand names‘), even Canada’s oldest marijuana growers are young companies, and in many cases not breaking even (yet). They are in expansion mode. There is no Pfizer or Procter & Gamble to put money into. The entire industry is new.

Canopy Growth (WEED: TSX), Canada’s largest marijuana grower by market cap, hit an all-time high of $48.72 on June 22nd. It then quickly erased more than a billion in market cap to trade around $40 per share late in Thursday trading.

Still, for most growers, peak hysteria appeared towards the end of 2017 and early 2018. Take a look at Aphria’s stock chart below:

Some argue the smart money has been reducing exposure to weed stocks and locking in gains since the peak in early 2018. Eric Nuttall, Senior Portfolio Manager at Ninepoint Partners, speaking on BNN Bloomberg last week, explained,

“I was told by an informed source that over 80% of the volume at TD Waterhouse, so it’s a good representation of the focus and mindset of Canadian retail investors today are in weed stocks.

My own mom asked me if she should buy a weed stock like two weeks ago. And to me that kind of indicates that perhaps the last person is in to the trade.”

We Agree with Nuttall on Weed Stocks Volume

When we look at volume levels on the TSX and TSX Venture we see a direct correlation to weed stocks. Earlier in the article we noted Canopy Growth and MedReleaf hit all-time highs on June 22nd. Sentiment from Canada’s largest marijuana stocks flows down onto the TSX Venture, which saw 97.3 million shares trade on June 21st and 73.7 million total shares trade on the 22nd. For some perspective, the last time the TSX Venture traded more volume was on February 21st, when 103.7 million shares exchanged hands. Also, that was the last time the Venture eclipsed 100 million shares in a day, which was roughy its average volume in January.

We Saw the Marijuana Craze Coming

While we’ve been investing/trading in marijuana-related stocks since 2014, our editorial alerts that the space could turn into something huge began in 2015. In October of that year we published an article titled The Future of Marijuana stocks in Canada. Below is an excerpt on Canopy Growth:

Click here to read more from the Future of Marijuana Stocks in Canada.

Canopy is still benefiting from being the first established name in the space.

At the time, Canopy Growth traded on the TSX Venture under the symbol CGC for about $3 per share. All of the mentioned companies increased 10X from the time that article was published to their all-time highs in late-2017/early-2018; or for Canopy, more recently.

Culture influences policy; and as we have seen, policy can have one heck of an impact on a sector. Weed stocks are ‘where it’s at’ for the investing public, and that won’t change for some time, likely not until at least year-end. But, as supply comes online in 2019 and 2020, expect companies that go international to outperform, while the domestic-only players dwindle. Remember, the U.S. is off limits. Not a single gram will make it across the border for the foreseeable future.

So, for Canadian investors, the only way to play the global consumption of marijuana is to invest in companies with subsidiaries abroad that have access to emerging marijuana markets.