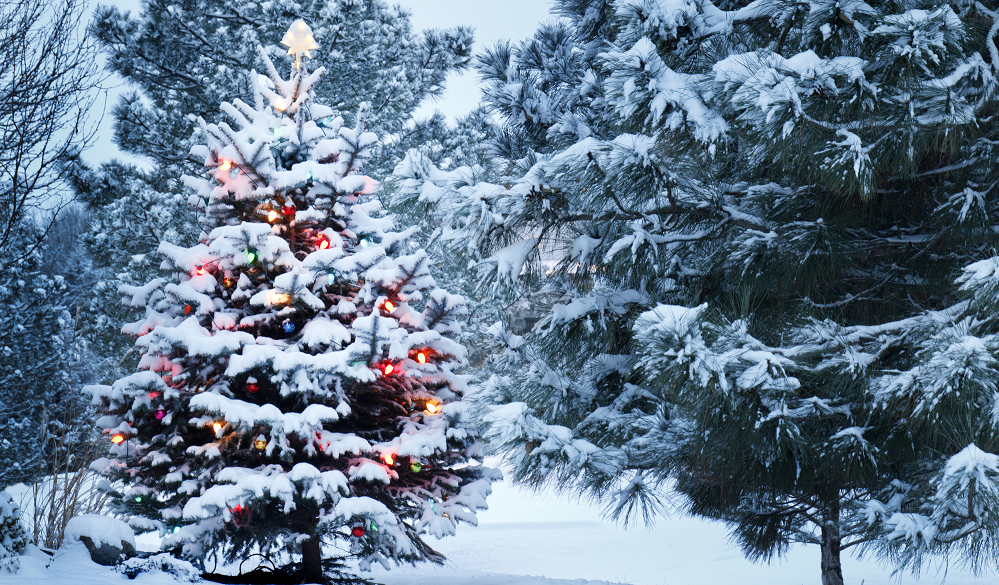 There is an indisputable fact about the TSX Venture that no one can deny. Over the last ten years, one of the most successful times to trade the Venture, for the purpose of buying and selling within a 60 day period, has been this very moment: December 22nd (give or take a day).

I don’t think there is a more seasonally predictable exchange in North America than the Venture. It is typically influenced by seasonality factors such as drilling seasons, fund raising periods (February through April and September through November), low volume months (July and December) and global inflation fears. Long story short, this exchange is a creature of habit.

On June 10th of this year, I wrote to you explaining how mid-to-late June provides another great time to buy the Venture and sell before year-end (click here for report). I wrote,

From mid-to-late June, to the end of December, over the past ten years, the TSX Venture has amassed an average gain of roughly 12.07%. During that ten year period, had you bought the index in mid-to-late June every year, you would have had the opportunity to make a profit in eight of those years.

I concluded the article with,

“…after being in a bear market for two years and the supportive historic data I’ve presented, it [TSX Venture] is getting ‘cheap enough’ – in the words of Rick Rule – to make a calculated, short-term gamble.

The TSX Venture bottomed this year on June 26th. After bottoming, it proceeded to rally 13% from its lows, peaking in late October.

History has a way repeating itself, and I’ve always taken seriously the strong seasonality factors at play for the Venture.

Over the last ten years, had you bought the TSX Venture Index on December 22nd (give or take a

Given that December 22nd is a few days from Christmas, general interest in the market is always at a low this time of year; combine this with the fact that investors are selling to realize tax-losses before year-end, and we have an ideal buying opportunity on the TSXV.

Volume dries up this time of year, and last minute sellers emerge. Obviously, this creates a temporary, opportunistic moment for proactive traders. Stink bids can get filled.

Venture stocks are extremely vulnerable this time of year, more so than virtually any other stocks, given their small market caps. This leaves many great TSXV opportunities on sale for 15 to 20% discounts from their November prices.

Take a look at the compelling chart below. It documents the potential return of the TSX Venture had you bought the index on any December 22nd over the last decade and sold within a sixty day period. There was the potential to make a profit 100% of the time. 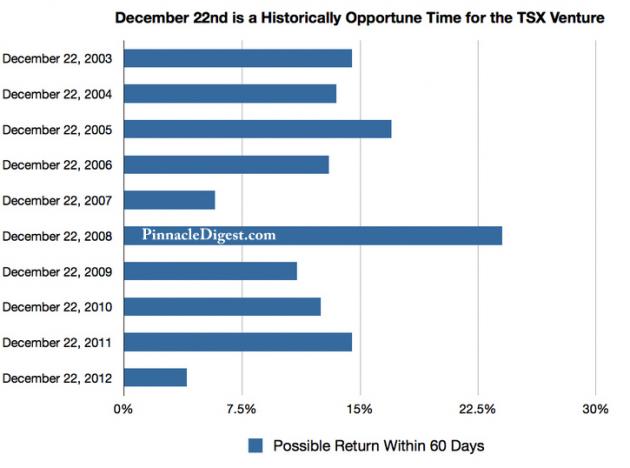 Some of the increases from the Venture within the sixty day period were monstrous. For example, had you bought the index on December 22nd, 2008, you would have had the opportunity to sell by February 22nd, 2009 for roughly a 24% gain… over a sixty day period, that is truly remarkable considering we are talking about an entire exchange. On average, the TSX Venture gained 12.98% every year, at some point within the 60 days following December 22nd. In some instances, the highest level hit for the Venture during that 60 day period came in January (2008, 2010, 2013), making the maximum potential profit for traders even quicker.

With the season of giving upon us, many of us (myself included) are scrambling to get last minute gifts for our loved ones. With that in mind, it wouldn’t be a bad idea to consider doing some holiday shopping for yourself. This is sale season on the TSX Venture after all.

* If you’re not already a member of PinnacleDigest.com and would like to receive reports like this one, once per week via email, please click here to join for free.
This article represents solely the opinions of Aaron Hoddinott. Aaron Hoddinott is not an investment advisor and any reference to specific securities in the list referred to in the article does not constitute a recommendation thereof. Readers are encouraged to consult their investment advisors prior to making any investment decisions. The information in this article is of an impersonal nature and should not be construed as individualized advice or investment recommendations.

PinnacleDigest.com and its employees are not a registered broker-dealer or financial advisors. Before investing in any securities, you should consult with your financial advisor and a registered broker-dealer.Nothing in this article should be construed as a solicitation to buy or sell any securities mentioned anywhere in this newsletter. This article is intended for informational and entertainment purposes only. The author of this article bears no liability for losses and/or damages arising from the use of this article.