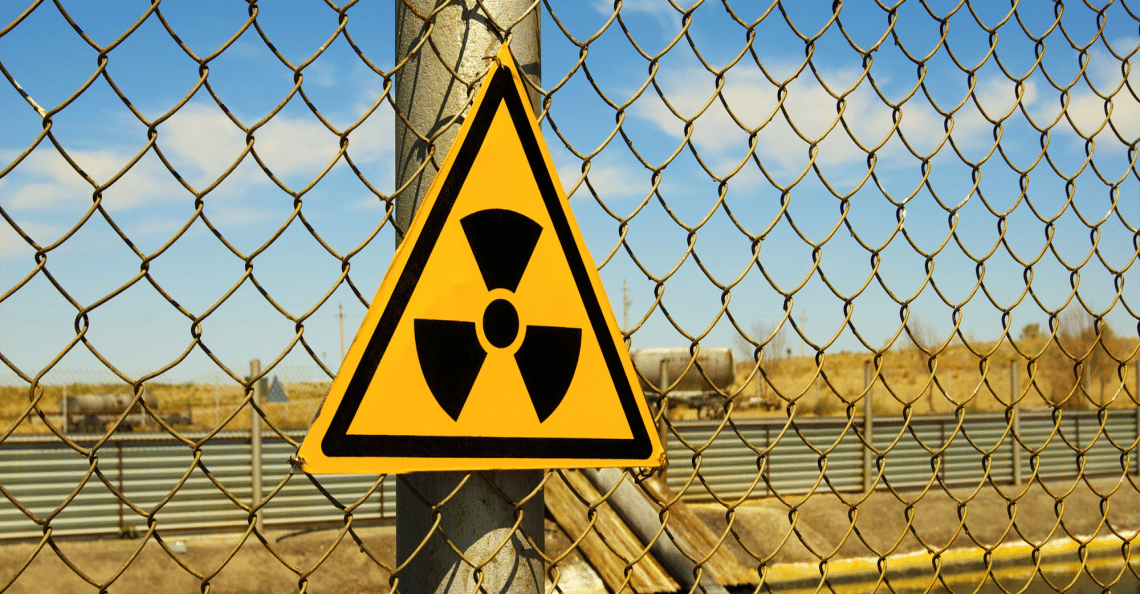 The Next Trade War Commodity | Uranium

The U.S. has a uranium problem, and no one but for the intelligence and defence communities seem to care… yet. 2017 saw U.S. uranium production hit its lowest level since 2004, the year before the sector went into an epic bull market. While production has been trending down for decades, demand and capacity for the country’s 99 nuclear reactors remains stable. Thus, the U.S. is dependent on uranium imports to provide 20% of its electricity needs. The stark reality is that America has limited reserves and is running low on ‘tariff free’ trading partners… this commodity, due to Trump’s tough talk on trade, will be used as a leveraging tool by some – perhaps even Canada.

As countries panic in the wake of Trump’s barrage of demands, Canadian uranium producers are checking U.S. inventories of yellowcake and like what they see…

According to the U.S. Energy Information Administration or EIA,

Check out the startling decline in U.S. uranium production below…

Perhaps most notable in the chart above is that when uranium prices peaked around US$140 per pound in 2007, the U.S. only marginally increased production.

Few countries depend on imports of a commodity like the U.S. does uranium. The U.S. imports in the neighborhood of 90% of its uranium. And with the threat of blackouts in southwestern states this week due to intense heat, heightened attention will be drawn toward the country’s electricity output.

According to Worldstopexports.com, the United States purchases the highest dollar value worth of enriched U-235 uranium from Russia. Russia supplied “US$639.9 million (45.5% of US enriched uranium imports)” to the U.S. in 2017.

Here is where things get really interesting:

On the natural uranium front, Canada is the clear winner. According to Worldstopexports.com, Canada exported a whopping “US$585.4 million (90.6% of US natural uranium imports)” to the U.S. in 2017.

While not huge numbers, cumulatively about US$1.22 billion, enriched and natural uranium do not include overall imports.

Looking at uranium imports of all kinds, Canada still tops the lot:

The above numbers were before U.S. uranium concentrate production fell 16% in 2017. Today, the U.S. is even more dependent on imports, specifically from its friendly neighbour to the north…

For all these reasons, and at the behest of struggling U.S. producers, in mid-July Trump’s U.S. Commerce Department opened up a probe into “whether the present quantity and circumstances of uranium ore and product imports into the U.S. threaten to impair the national security.”

“The probe was initiated when US uranium producers Energy Fuels Inc. and Ur-Energy Inc. filed a petition in January asking the Commerce Department to investigate the matter under Section 232 of the 1962 Trade Expansion Act; this is the same provision the president used to slap tariffs on steel and aluminum imports.”

The main complaints seem centred around competition from state-owned companies, in Russia and Kazakhstan. By law, the commerce department has 270 days to complete and report the findings of such an investigation. Include the President’s 90-day review period and we are likely a year away from anything happening…

The Trump Administration can ponder tariffs all it wants; however, the only real security risk to the United States would be putting huge tariffs on natural and enriched uranium it so desperately needs. As such, Canada finds itself in a fortuitous position.

“Almost 90% of uranium delivered to U.S. reactors was from foreign nations in 2016, according to the government agency, indicating that just like rare earth metals, if America’s trading partners wanted to put the US economy in a vise, they could simply stop exporting uranium to the US and watch as the country’s military and power generation sectors grind to a halt.”

Perhaps most telling, is that the U.S. needed about 90% of its uranium imported prior to the 16% decline in domestic production from 2016 to 2017. Furthermore, in 2007, when uranium prices soared to all-time highs, U.S. production hardly increased. That wasn’t due to a lack of desire, it was an inability to boost production. 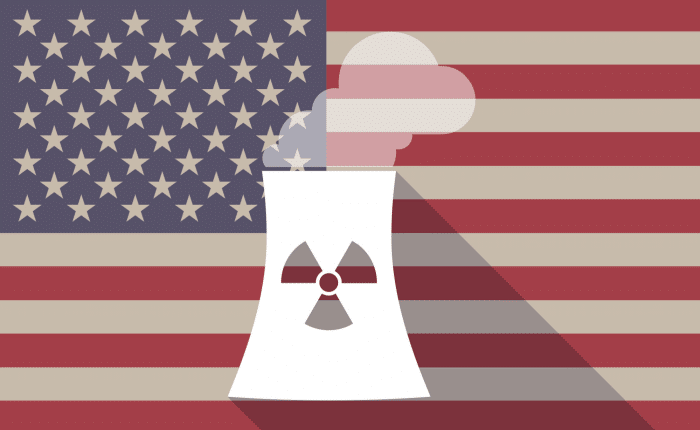 From a uranium production standpoint, Canada and other regions have such a competitive advantage that the U.S. has no hope of competing. Imagine transporting product over 10,000 kilometres from Kazakhstan to the U.S. and still being more competitive than if America was to produce it on home soil…

In the case of uranium, Trump cannot fix his own countries lack of competitiveness via tariffs. In fact, if he pushes too hard with trading partners, he could exacerbate it.

The U.S. economy and grid are too dependent on reliable and continual uranium imports. Canada may finally have its ‘trump card’ in this escalating trade war…

The uranium price is too low and U.S. deposits are generally too low grade for it to compete. Check out this visual to better convey Canada’s undeniable advantage when it comes to uranium production. According to Visual Capitalist, 10 of the world’s top 15 highest-grade uranium deposits lie in Canada’s Athabasca Basin. 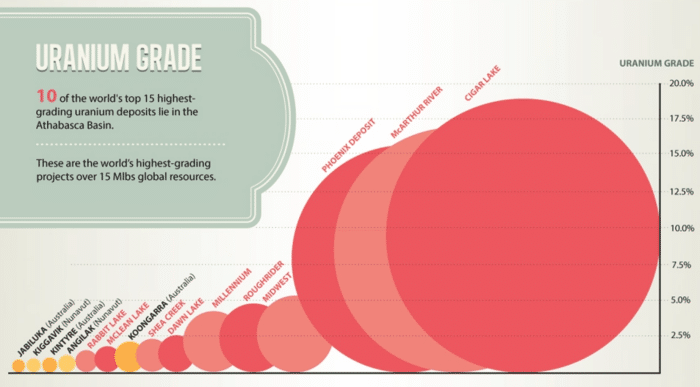 The red circles represent Canadian deposits within the Athabasca region of northern Saskatchewan. The size of the circle represents the increasing grade of the uranium it contains. It’s very telling to see Russia and Kazakhstan without a single deposit in the top fifteen. So, the U.S. can huff and puff about its dependency on foreign (specifically Canadian) uranium, but what can it do?

Here is why, if Canada plays its cards right, it could get a favourable deal (and resolution to NAFTA) with Trump…

Few realize nuclear power revolutionised the U.S. Navy back in the 1960s and remains a critical resource.

Finally, according to the WNA,

“The US Navy has accumulated over 6200 reactor-years of accident-free experience involving 526 nuclear reactor cores over the course of 240 million kilometres, without a single radiological incident, over a period of more than 50 years.”

So, while the electric grid in the U.S. is most pressing on a daily basis, the U.S. Navy cannot function without boatloads of uranium (pun intended). Imagine the dependence if a war were to break out, or perhaps a large presence required in the Strait of Hormuz if things were to escalate with Iran… 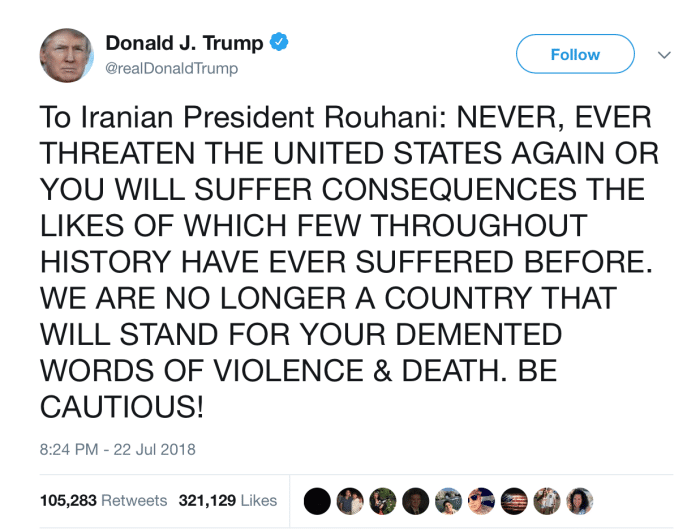 Last Sunday, Trump made this tweet in retaliation to Iran’s President Hassan Rouhani, warning the US that war with Tehran would be the “mother of all wars.”

Unlike Japan and Germany, America Continues to Embrace Nuclear Power

There is something very Americana about nuclear energy. Despite the collapse in domestic production, capacity and generation for nuclear power remains level.

What’s so compelling about the uranium story is that the U.S., as strong as it is for the demand side, is only part of the global uranium narrative, despite being the largest producer and consumer of nuclear power.

According to the WNA,

“Today there are about 450 nuclear power reactors operating in 30 countries plus Taiwan, with a combined capacity of over 390 GWe. In 2015 these provided 2571 billion kWh, about 11% of the world’s electricity.”

“Nuclear power capacity worldwide is increasing steadily, with about 50 reactors under construction.”

Finally, looking out to 2040, uranium demand is set to increase substantially:

“In the 2017 edition of its World Energy Outlook report, the IEA’s ‘New Policies Scenario’ sees installed nuclear capacity growth of over 25% from 2015 (about 404 GWe) to 2040 (about 516 GWe). The scenario envisages a total generating capacity of 11,960 GWe by 2040, with the increase concentrated heavily in Asia, and in particular China (33% of the total). In this scenario nuclear’s contribution to global power generation increases to about 14% of the total.”

So, with new demand coming online, uranium miners are patiently waiting for the price to rebound. It hasn’t been easy, mind you. The sector has been in a bear market for roughly seven years.

Uranium Price Has To Rebound at Some Point

After peaking in 2007 at US$140 per pound, uranium prices fell to US$70 per pound prior to Japan’s Fukushima disaster and recently just US$23 per pound. We are predicting the uranium spot price will double within 18 months; not because there is all this new demand coming online, but because uranium is already sold at a massive premium to today’s current reported price…

In an interview posted July 19th, the anchor of Kitco News talked with the CEO of an Australian-based uranium company about the current market environment. He stated,

“Most uranium is sold between the producer and the utility in a private treaty or a private contract and that’s never reported. So, the actual spot market is not a clearing house market like the LME or the gold spot price.”

When asked what the real price of uranium is he said,

“Well that’s an interesting question because no contracts are being written right now. So, in 2017 five contracts were written in the U.S. and since the beginning of 2018 nobody has written any contracts…

At some point when the utilities start coming back into the market to write contracts, I think those are going to be in the $50s and $60s.”

Obviously, if gold or copper, or any other commodity, were to double in value in the next 12-18 months, issuers in the space would react. We expect the same for uranium…

What are US nuclear power plants actually paying for uranium?

The EIA released data in May of this year which sheds light on the pricing environment from U.S. buyers:

“Owners and operators of U.S. civilian nuclear power reactors (civilian owner/operators, or COOs) purchased a total of 43 million pounds U3O8e (equivalent[1]) of deliveries from U.S. suppliers and foreign suppliers during 2017, at a weighted-average price of $38.80 per pound U3O8e.”

Why so high if the price of uranium is trading in the low $20s?

The vast majority of uranium miners cannot make money where the price is today.

Uranium miners are refusing to sell much at today’s price, opting to wait it out for higher priced contracts.

In 2017, Kazakhstan’s state-owned uranium miner, Kazatomprom, slashed production by 20% for the next three years. Cameco, Canada’s largest uranium producer, cut production by 40-45% according to its CEO in an interview from last year.

All of these production cuts remind the U.S. of their dependence on foreign imports. In our mind, it’s just a matter of time before prices rebound dramatically.

According to a late-May article titled World Uranium Index Suggesting Higher price for the metal, an Elliott Wave Forecast suggests a bullish period for uranium:

According to the report,

“Consequently, both sequence from 2016 & 2017 are bullish and suggesting that Uranium price will remain supported in the coming few months to see higher levels.”

The world is going to wake up to the fact the U.S. is the largest consumer of uranium, but hardly produces any. If the uranium price has indeed bottomed, which we believe, it’s time to research players in the space with proven reserves near current production infrastructure.