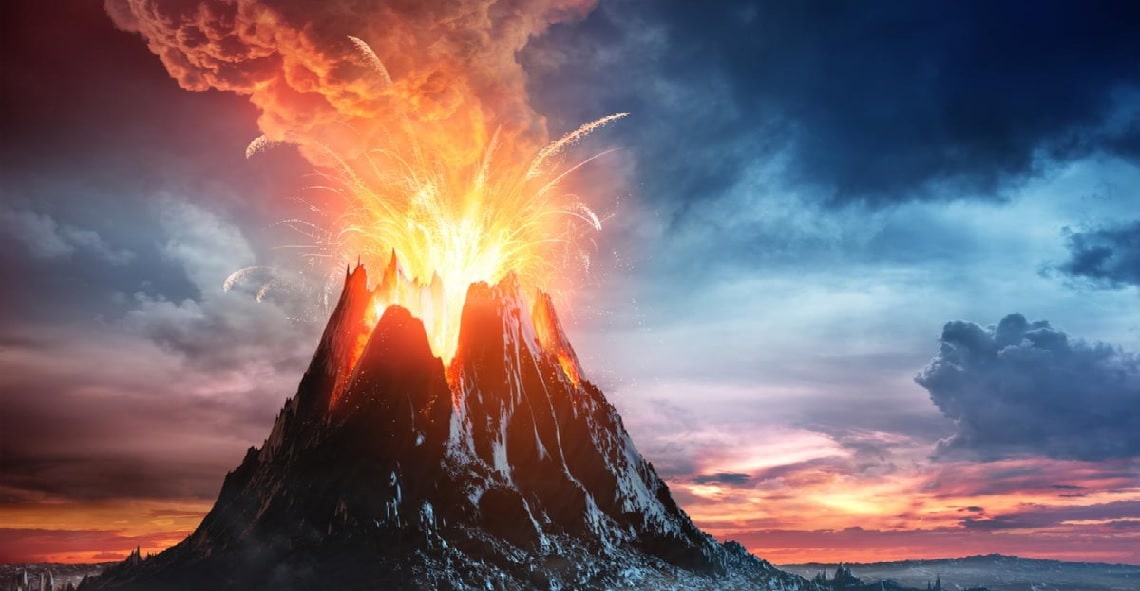 Marijuana, cannabis, hashish, pot, weed, dope, grass – whatever you call it – is, once again, arguably the hottest sector in North America. The moves we are seeing in the Canadian and American cannabis sector remind us of late-2017.

In other words, the entire space has gone parabolic.

Last Tuesday, the Canadian Marijuana Index (CMI) went up 19.7%, blasting through 400 to close at 437. The following day was even bigger. The CMI jumped roughly 23% as leading names like Canopy Growth, Tilray, and Aurora – already multibillion-dollar companies – surged higher.

The question now is, will cannabis stocks continue to climb? In today’s Weekly Intelligence Newsletter, we’ll explore the stark differences between now and late-2017 to gauge whether or not the current rally can last.

Few of us would argue that cannabis stocks were not significantly overbought back in 2017/early 2018. Back then, no cannabis company was profitable (most still aren’t), few were growing or selling much, the legal framework was incomplete, and future growth was premised on unrealistic demand forecasts. But things have changed since then…

In particular, there are three significant differences between 2017 and today that we’ll focus on in this newsletter:

The legal cannabis retail market is coming alive in Canada and the United States. Check out Canada’s monthly sales volume from October 17, 2018 (when legal sales began) through October 2020. 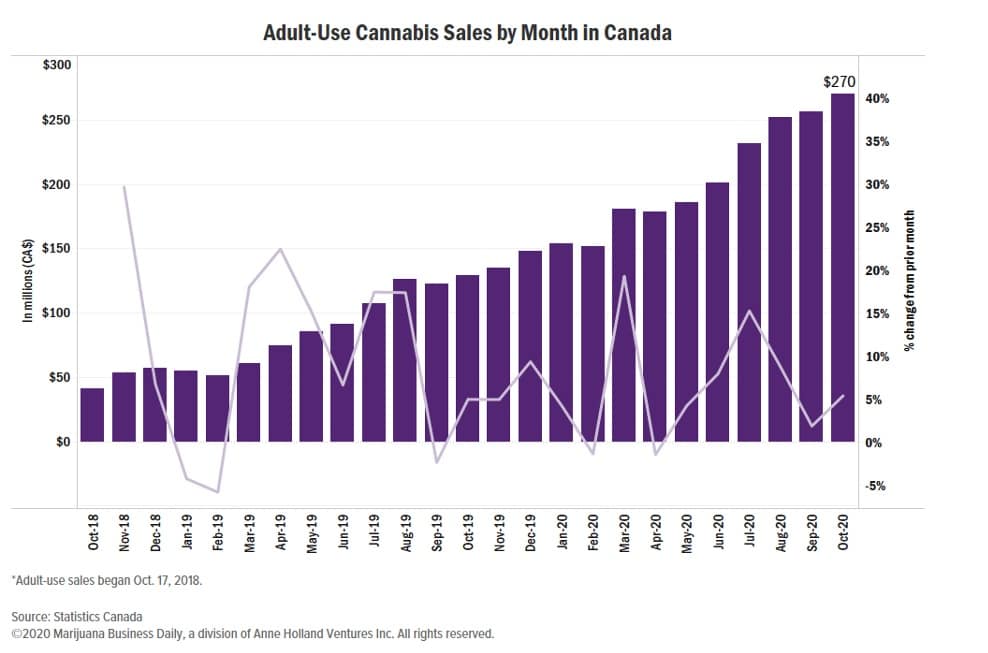 While the above chart is impressive, here is a more symbolic chart: 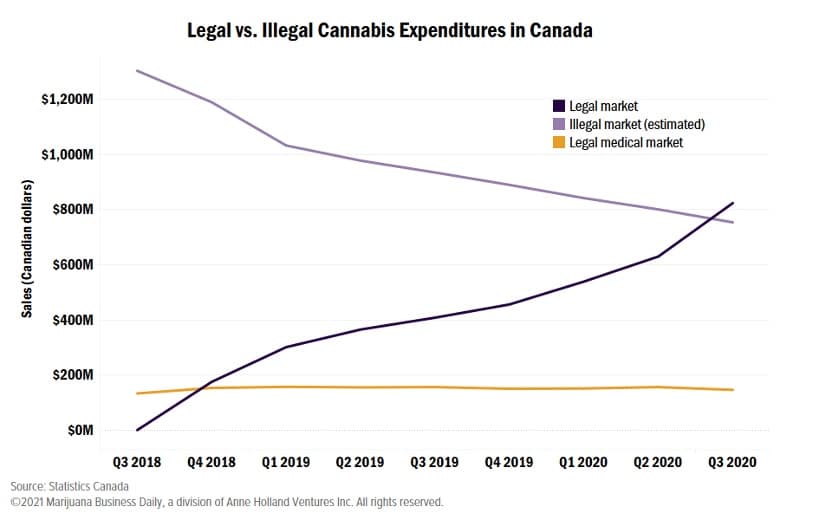 According to data released earlier this month from Statistics Canada, sales of legal cannabis overtook the black market in Q3 2020.

With the illegal market in a steady downward trend, it appears legal sales will continue garnering market share for years to come.

The end game for any cannabis deal has always been the U.S. And over the course of 2020, this market has become even more valuable.

“Americans purchased $18.3 billion in cannabis products over the past calendar year, $7.6 billion more than the $10.7 billion in sales the previous year.”

“Medical marijuana is now legal in 37 states, while 15 states and Washington, DC, have legalized cannabis for all adults.”

With Biden controlling the House and Senate, these numbers could increase significantly over the next two years. More on that shortly…

The second significant difference between the 2017/2018 cannabis rally and today is the leadership of top cannabis deals.

The Bedford Consulting Group published the first-ever comprehensive report of Executive and Board compensation in the North American Cannabis industry in May of 2020. While the data is from 2019, it shows the direction the space began taking during the heart of its growing pains.

According to the report, more than one-third of cannabis company CEOs were replaced at some point during 2019.

A highlight of the Bedford Consulting Group report is very telling:

“At the 50th percentile, Cannabis CEO total compensation was $1,712,759 for companies over $1 billion in market cap. By comparison, CEOs at the same 50th percentile and market cap in the Dietary Supplements and Food and Beverage industry earned $4,632,015.”

The report went on to state:

While there are only a handful of Canadian-based cannabis companies (8 as of this writing) with market caps above CAD$1 billion, salaries will likely increase as more companies look to attract experienced leaders.

Got CPG Experience? If Not, Step Aside

The examples of management from the consumer packaged goods (CPG) world stepping in to lead beaten down cannabis companies are numerous. Tilray and Canopy Growth, two of Canada’s largest producers and sellers of cannabis, are among them.

On January 14, 2021, Tilray announced the hiring of former Revlon commercial executive Jon Levin. It also added Michael Kruteck, a former executive with Molson Coors Beverage, as its new CFO. Tilray hit a high last week of US$67 per share. For context, its 52-week low is US$2.43, according to Bloomberg. It closed trading last week at US$29 (volatility is still the name of the game with cannabis stocks).

Canopy Growth is another prime example of a CPG management transition.

The Star reported at the time of Canopy Growth Founder Bruce Linton’s firing in mid-2019,

“Constellation has said it will probably select a replacement for Linton from its own ranks, though many in the industry expect it to recruit a consumer-products expert from outside the company.”

They did just that, appointing David Klein, former Chief Financial Officer and a member of the Executive Management Committee at Constellation Brands, as CEO effective January 14, 2020.

The third most significant difference between today’s cannabis bull market and that of two years ago is President Biden. With Democrats taking control of the White House and Congress, the door is now wide open for reform in cannabis legislation…

While the U.S. is more divided than ever before, the majority of Americans appear to agree on one thing: marijuana legalization.

“Americans are more likely now than at any point in the past five decades to support the legalization of marijuana in the U.S. The 68% of U.S. adults who currently back the measure is not statistically different from last year’s 66%; however, it is nominally Gallup’s highest reading. . .”

An Emerson College/7 News national poll pegged support for marijuana legalization at 61% — slightly lower, but still a strong majority, especially when compared with other contentious issues.

“. . .marijuana will almost certainly be decriminalized under a Democratic-controlled Congress and a Biden presidency.”

“Canopy Growth Corp. is preparing for the possibility that major cannabis reform takes place in the U.S. over the next two years now that Democrats control the White House and both chambers of Congress.”

On a call with analysts on February 9, 2021, Canopy Growth’s CEO David Klein stated,

“We anticipate that this legislation will include comprehensive reform to ensure restorative justice, protect public health and implement responsible taxation while ending cannabis prohibition [in the United States].”

With all this said, we shouldn’t be too confident Biden will legalize cannabis across the U.S. just yet.

Esquire goes on in the aforementioned article,

“. . .Politico reported that Biden had come around enough to admit, ‘I think it is at the point where it [marijuana] has to be, basically, legalized,’ and that he did not consider it ‘a gateway drug.’ However, his campaign promises were hardly as progressive of other Democrats, calling for decriminalization instead of legalization, as well as removing marijuana from the Schedule I list, expunging some drug-related criminal records, and blocking federal interference in states with legalized weed.”

After almost two years in a bear market, the ongoing explosion in liquidity across Canadian and U.S. markets has spilled into the cannabis sector.

With legal cannabis sales rising, seasoned executives taking the reins, and a favourable political environment for marijuana legalization in the U.S., the cannabis sector is back – and it may present opportunities for investors who missed out on the previous cannabis bull market.