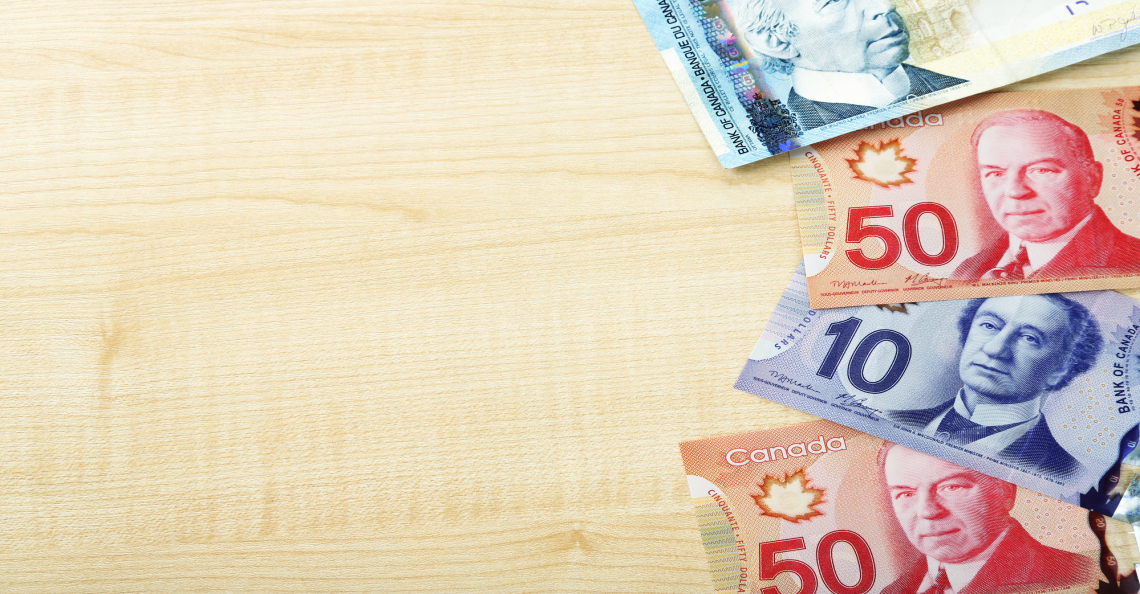 Canada’s economy expanded at an annualized rate of 3.7% during the first quarter. Over the same period, the U.S. put up a paltry 1.4% gain…

In addition, Canada created more jobs in Q2 than in any other quarter since 2010. Having just celebrated its 150th birthday, Canada is now, by far, the fastest growing nation in the G7. As Canadian investors and entrepreneurs, we were a bit surprised at this recent headline. Aside from a few pockets, the country doesn’t appear to be firing on all cylinders as the headline suggests. Naturally, a lower Canadian dollar has given Canadian companies an advantage, particularly with the U.S. (Canada just posted a trade surplus of $5 billion in March, enough for a three year monthly high); however, Canada’s debt is rising and low-interest rates are the primary enablers of domestic growth in Canada.

Canada’s growth rate of 3.7% in Q1 was not a record, even for recent history, but it has the Bank of Canada warning a rate hike may be coming (next decision to be announced on Wednesday). Sadly, economic growth is largely coming from reduced savings and near-record household and government deficits. In fact, Canadians spent so much in Q1 the personal savings rate dropped a full percent to 4.3%, from 5.3% in Q4 of 2016.

The financial crisis of 2008 pushed the savings rate briefly above 5%, but has generally been trending lower for decades. Many economists point to record high real estate prices across much of Canada as the culprit. Rising house prices have a two-pronged effect: first off all, a higher percentage of income is needed to service a mortgage or pay rent these days. Secondly, a false sense of wealth encourages people to spend beyond their means; or worse, dip into their home equity praying prices will rise forever (we saw this leading up to the housing crash in America a decade ago).

Another key factor to always observe when checking the strength of an economy is wage growth. We were disappointed to learn, once again, Canadian wage growth had slowed to a record low in April – increasing just 0.7% year over year. Full-time earnings ticked up just 0.6%, according to Statistics Canada; far below even the most conservative inflation estimates. These are record low increases at a time when the economy is “taking off” and real estate is jumping by 10-20% annually across the country…

Canadians have been stretched to the limit financially. The country’s household debt to disposable income sits near a record 169%…

So, the average Canadian owes $1.69 in credit market debt for every dollar earned (credit market debt includes mortgages)… more proof the country’s economic gains have come at the behest of debt. While the headlines tout the fastest, strongest growth of any G7 nation, understand that it comes at a cost.

Here are a few key numbers behind Canada’s big first quarter of GDP growth: Household spending on goods exploded, rising 4.3%. The increase in spending is short-term, however. Consumers have taken on more debt despite stagnant wages.

Imports into Canada witnessed a 13.7% annualized jump in Q1, while exports lagged, resulting in a trade deficit. Canada is an exporting nation. There is no way around this. Blessed with an abundance of natural resources and a relatively small population, for a nation of its geographical size, Canada has depended upon exports to bolster GDP for generations. Although manufacturing has made gains in recent years, it has never recovered to its highs of the mid-2000s (pre-Great Recession).

In recent months, Canadian exports have improved; in fact, exports gained 1.8% in April to a record high $47.7 billion. The big ticket was energy, which accounted for $8.8 billion of the total.

Imports jumped to $48.1 billion – the fifth consecutive monthly increase and also a record high. Canada remains in a modest trade deficit for many standards; but, for a country with such natural resource wealth and a weak Canadian dollar, this is concerning.

Back to Canada’s Economy & Q1 GDP…

Perhaps the bright spot was business investment, which ticked up at an annualized rate of 10.3%. While the majority of firms invested in machinery and equipment, real estate is included. Business investment in housing was the same as the quarterly GDP at 3.7%; consequently, this is more than double the 1.5% from Q4 2016.

The more closely one evaluates the numbers, the more obvious it is that Canada’s economy is dangerously dependent on debt and real estate. While the headlines tout strong growth and a forthcoming rate hike, we are urging our subscribers to maintain caution…

Canada is vulnerable to an economic shock if rates rise even marginally. A shock becomes even more likely with oil below $50 per barrel. The economy has not diversified yet.

The Bank of Canada is preparing to follow the Fed in raising its key rate (currently at 0.5%), which has been at or below 1% for nearly a decade.

Seems like Canada’s economic (and tax) engine will finally get a correction if on July 12th the Bank of Canada follows through. A rate hike could negatively impact provinces such as British Columbia, which receives billions in real estate related tax revenues. For example, the property transfer tax, which some argue is merely a sheet of paper stamped by a bureaucrat, generated $1.54 billion in tax revenue for the province last year alone. For this provincial government revenue stream, volume matters most. Houses need to move in order to generate that capital.

As is the case with politics around the world, the party in power accuses its predecessor of mismanagement and wastefulness. As recently as June 27th, Prime Minister Trudeau continued to blame the past Conservative government for his debt woes. In an article published on TheSpec.com by Andy Blatchford titled, Trudeau blames deficit on Tories, he states,

“The Liberals won the election with a pledge to run annual shortfalls of no more than $10 billion over the first three years of their mandate and to eliminate the deficit by 2019-20.

The prime minister refused once again, however, to say when the books would actually be balanced.”

While official figures will be published in the fall of 2017, the Liberals have more than doubled their projected $10 billion deficit. In late-May, it was reported the Liberals ran a deficit of about $23-billion during their first full fiscal year in office…

Blatchford also stated in his article,

“A federal report, published on the Finance Department website in December, predicted that, barring any policy changes, Ottawa could be on a path filled with annual deficits until at least 2050-51.”

The Conservative surpluses are a tad misleading. To better understand how much past governments have spent, The Fraser Institute released a report in May that covered every Canadian budget since 1870. It matched prime ministers with their per-capita spending, adjusted to 2017 dollars.

The Trudeau government is close to breaking the record for per-capita federal expenditures, according to a new report by the Fraser Institute. Other major increases and record spending came during periods of war or economic crisis. The knock on Trudeau is that we are in a time of peace and apparent prosperity, yet the government is putting up near record spending numbers. Why? Because the economy isn’t strong…

Federal spending in 2017 will equal $22.84 per Canadian, per day. Annually, this spending equates to $8,337-per-Canadian for the year. For some context, Canadians got by on just $5,500 annually with Jean Chretien during the 1990s.

Trudeau’s predecessor, Stephen Harper, still holds the top spot at $8,375, reached in 2009 following the Great Recession. If spending continues on this path, however, Trudeau will soon hold the record. A May National Post article explained deficits could be headed much higher:

“At the most recent budget announcement by finance minister Bill Morneau, the government projected budget shortfalls that could top $120 billion by 2022.”

Canada may be able to balance its budget much sooner (or at least decrease annual deficits) if it can diversify quicker. While seen by many as a long shot, the Liberal government is investing major taxpayer capital in technology (we explained what and how they would invest in tech in early-2016 here), and it is beginning to pay off…

In a Bloomberg Technology article titled, Trudeau Versus Trump Is a Win for Toronto Tech and Innovation, the Prime Minister’s commitment to bolstering the tech sector in 2017 is explained:

“He has also extended a popular venture capital financing program started by the previous government and added another C$950 million to spread around tech hubs in Canada. He gave C$125 million ($96 million) specifically to support the country’s budding artificial intelligence research programs.”

According to the Bloomberg report, Bilal Khan, founding managing director of OneEleven, a start-up accelerator backed by OMERS and Royal Bank of Canada, said,

“The tech innovation ecosystem in Toronto has just been blowing up.”

Tech is the one true bright spot for Canada’s economy, just as we projected it would be when Trudeau took office. But in order for it to truly excel and stand on its own two feet, the country will need dozens of big name private equity firms out of the U.S. to set up shop in the Great White North. Growth in private sector funding is the key.

While the technology sector is making gains in Canada, the country has become dependent on its real estate sector. Construction spending tops the entire tech sector. And of course, you have real estate, rentals and leasing being the largest segment of Canada’s GDP. Also, consider how much the banks (finance and insurance), which came in at 7% of total GDP, depend on real estate fees and transactions.

Brian DePratto, TD Bank economist, spoke to BNN in the second half of 2016, which was reported on by the Huffington Post:

“If you go back and look at all those monthly GDP reports, even though real estate is the third biggest – it’s only about 12.5 per cent of the economy – it was responsible for about half of the growth on average over that time, so really an outsized contribution from that sector on that longer-term basis.”

What will happen if the growth engine of Canada (real estate/debt) stalls or corrects? Lower tax revenue, higher deficits and an economy in recession. Let’s hope the correction is not as pronounced as the run-up…

The punch bowl of record low-interest rates will soon be ending in Canada. On Wednesday, we may begin a slow tightening cycle which could be long lasting. Despite strong GDP numbers for Canada, rising borrowing costs pose a big risk for the supposed fastest growing economy in the G7.