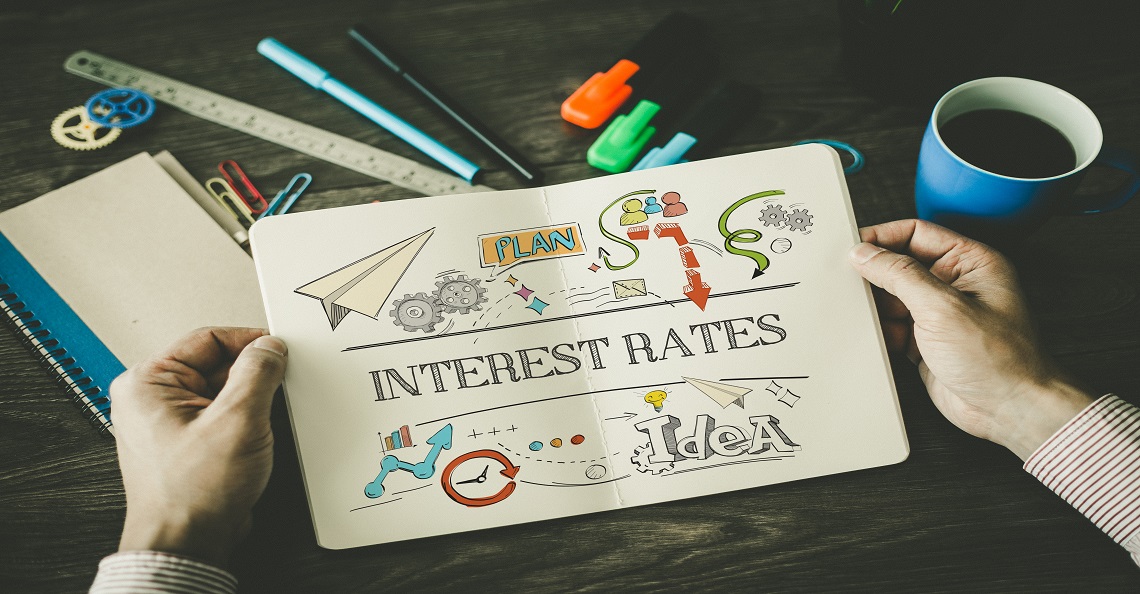 The Fed Chair Jerome Powell was re-appointed to another four years of service on Monday. Yet, for some reason, gold and many inflation assets are tanking. Gold was off 1.5% today to $1,782 per ounce, while silver was down a whopping 3.75% to $23.33 per ounce. So why is the man whose policies took inflation to a 30-year high lousy news for precious metals?

Let’s look at the debt situation in the U.S. and the odds of higher rates logically for a moment.

According to Kimberly Amadeo’s Interest on the National Debt and How It Affects You, published on thebalance.com,

“For fiscal year 2021, the CBP estimated that the interest on the public debt was $413 billion.

That equates to about 10% of total tax revenues in the U.S. Does the market think the Fed will raise rates and increase the interest paid on the national debt?

The U.S. Government is Like a Huge Corporation (that loses a lot of money every year)

For a moment, view the United States government like a large corporation. It has revenue, expenses, and countless issues to fix and maintain daily. Luckily, this corporation can borrow as much money as it likes and decide what interest rate it pays. While that power seems envious, it has proven disastrous because the U.S. government has borrowed far more than it can ever afford to pay back. At least in the value of today’s dollars. Herein lies the truth. The Federal Reserve can never and would never raise interest rates because it would deal a death blow to the U.S. government’s balance sheet. So let’s take a look at where things stand today.

Now, the above assumes the Fed will raise interest rates in the coming years. But I’m going to show you why that probably won’t happen.

You see, much of the national debt that the U.S. has to pay interest on is relatively short-term.

“The maturity of federal debt ranges from next week to 2051. Thirty percent is due within the next 12 months, with another 13% in the following 12 months. It’s a great puzzle why, in an era of historically low interest rates and projections of high future deficits, the U.S. Treasury did not lock in low interest rates by issuing more long-term debt and less short-term paper. Whatever the reason, our hypothetical increase in interest rates will boost net interest expense on 43% of the debt in the next two years, adding about $240 billion to federal outlays.”

$240 billion in net interest may not seem like much when the U.S. is running multi-trillion dollar deficits and generates about $4 trillion in tax revenue every year, but it is. When you add it to the $400+ trillion the States already pays in interest every year, all of a sudden, the U.S. is approaching $750 billion or close to 20% of total tax revenues!

Remember, this is just on the net interest, not the principle that continues to soar year after year. Nevertheless, the below forecast is a sobering gut check of where we are headed. 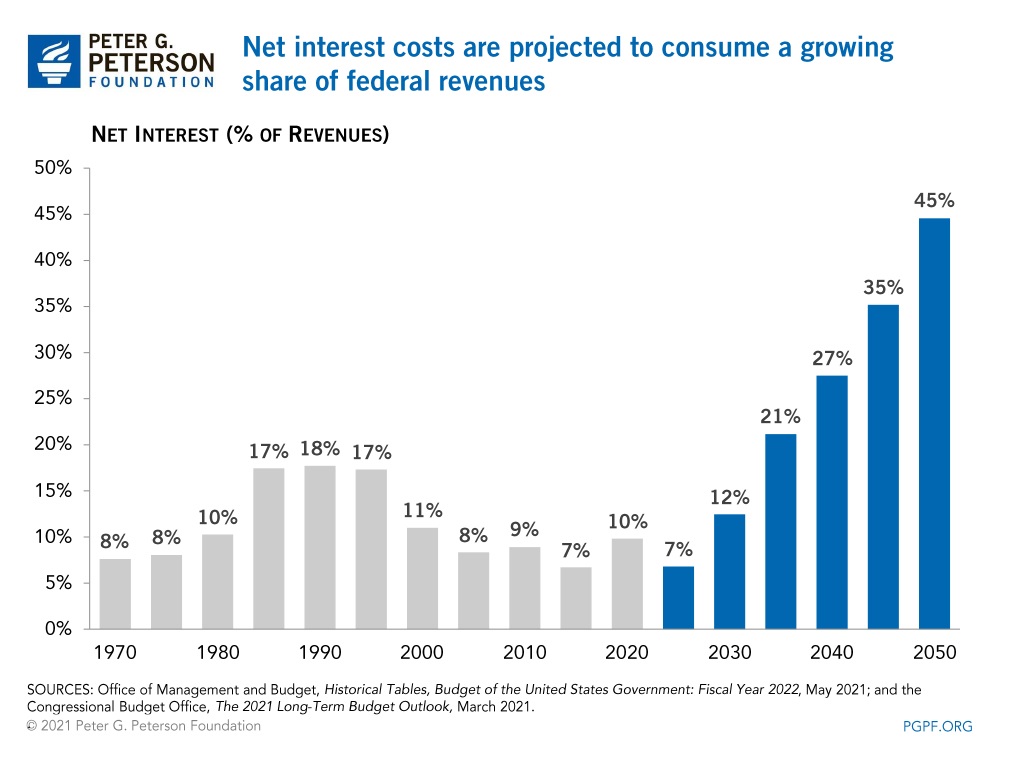 The above chart is wishful thinking at best and doesn’t account for another recession or crisis which is sure to come. So here is a more realistic look at where interest spending on the debt is heading: 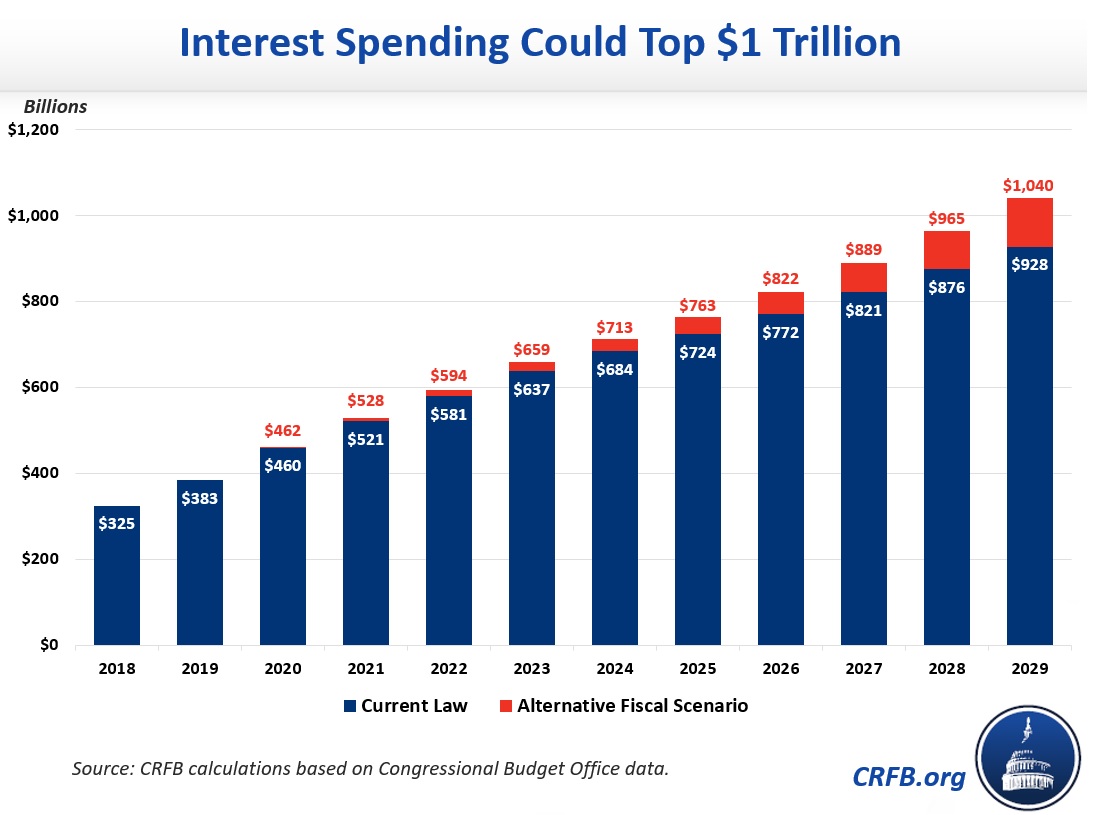 Here is where things get really scary.

Written in 2019, just prior to the pandemic, As Debt Rises, Interest Costs Could Top $1 Trillion, by the Committee for a Responsible Federal Budget:

With upwards of 43% of America’s national debt of the short term variety, made up of treasury bills and notes, not long term bonds, net interest payments are highly sensitive to any significant or prolonged rise in interest rates. Thus, it appears the Fed will only raise rates if the risk of inflation becomes such that it presents a larger destabilizing threat to the economy than higher borrowing costs and soaring interest payments. We may be approaching that moment but are not there yet.

Furthermore, the Fed is praying it can monetize the debt and reduce it as a percentage of GDP via inflation. If inflation can run at 10% for a few years, tax revenues would soar as prices rise, making the debt and therefore interest payments smaller and more manageable. In my mind, that is the Fed’s end game or way out.

So, as Mainstreet burns under runaway inflation, the Fed finds itself in a box so tight it can no longer sit down or turn around. Looking at the numbers, it becomes clear that the Fed won’t raise interest rates anytime soon. It will avoid adding billions to the annual net interest payment and give itself and the U.S. government a chance to inflate away its soaring debt.