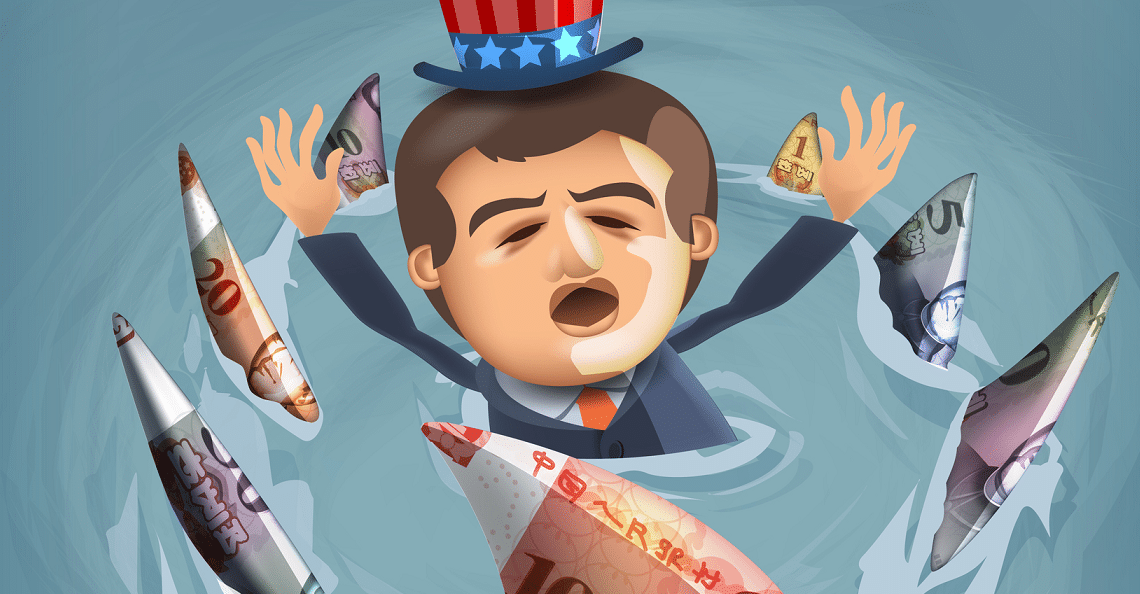 The yuan is no longer just another medium of exchange in an elite basket of currencies. For decades China has been working to move the Yuan into a more powerful, global position. Today, for the first time, yuan-denominated futures of crude oil began trading on the Shanghai International Energy Exchange. For the past few generations the U.S. dollar has been the only game in town; so, after decades of crude exclusively trading in the world’s reserve currency, the yuan has arrived.

The free trade Bretton Woods System, where the dollar dominates all international trade in return for protection, is eroding, albeit slowly. While the U.S. has not had to protect China for some time, its motivation to protect them or anyone else who turns away from the dollar will diminish.

The U.S. Dollar index dropped by nearly half a percent Monday – closing at 89.05.

China’s crude futures contract launching today, make it all the more timely, given the $50 billion in Chinese imports Trump levied last week. Look for China to appease the U.S. in the short term, but know it wants to diversify and do its own thing as the years wear on.

China’s capital controls and the added risk that comes with regular government intervention has stymied many countries owning large amounts of yuan… not anymore. China’s long game goal of integrating the yuan into international trade got closer today.

“After an initial surge in volume that outpaced overnight transactions in global benchmark Brent crude in London, trading tapered off toward the end of the session and the contract closed at 429.9 yuan a barrel ($68.22).”

Imagine ten years from now, listening to the radio and the price of crude and gold is reported in yuan, not dollars. Now wouldn’t that be a brand new world.

China’s renminbi and the yuan’s rise has been a key topic at Pinnacle for years. Trading oil contracts in yuan, allowing global commodity funds such as Glencore to bypass the U.S. dollar altogether is a startling achievement. However, the real tide began turning a while ago. Moreover, in October of 2016, the yuan joined the IMF basket of currencies. Here is an excerpt from A World Currency is Born,

“In what is being dubbed as one of the ‘final steps toward a one world or global currency’ China’s renminbi will be initiated into the IMF’s basket of currencies, known as SDRs (Special Drawing Rights), on October 1st. Prior to renminbi-inclusion, the SDR consisted of the USD, yen, GBP and euro. The renminbi’s acceptance will have global ramifications from a trade and geopolitical standpoint as leading economies are linked and supported by one quasi-currency.”

“As the U.S. Dollar takes a more shared role with respect to its status as the world reserve currency, the opportunity is rapidly approaching for countries such as China and Russia to no longer have to conform to an American policy world…”

Click here to read A World Currency is Born.

China Yuan | Still One in Basket of Currencies

China is not stopping its march towards dollar independence. The Chinese refuse to play second fiddle to the Americans forever and will continue to push for diversification. However, while China reduces its dependence on the U.S. dollar, the world is not sold on the yuan.

“Data released this week from Swift, the global interbank system that transfers trillions of dollars worth of currency daily, showed that just 1.61 percent of domestic and cross-border payments processed in December were denominated in yuan.”

Finally, it will take years for China to slowly roll-out the infrastructure and gain trust America has established over the past 75 years or so. Still, the fact China is setting up its own futures contracts for crude, tells us the country’s vision for the future.