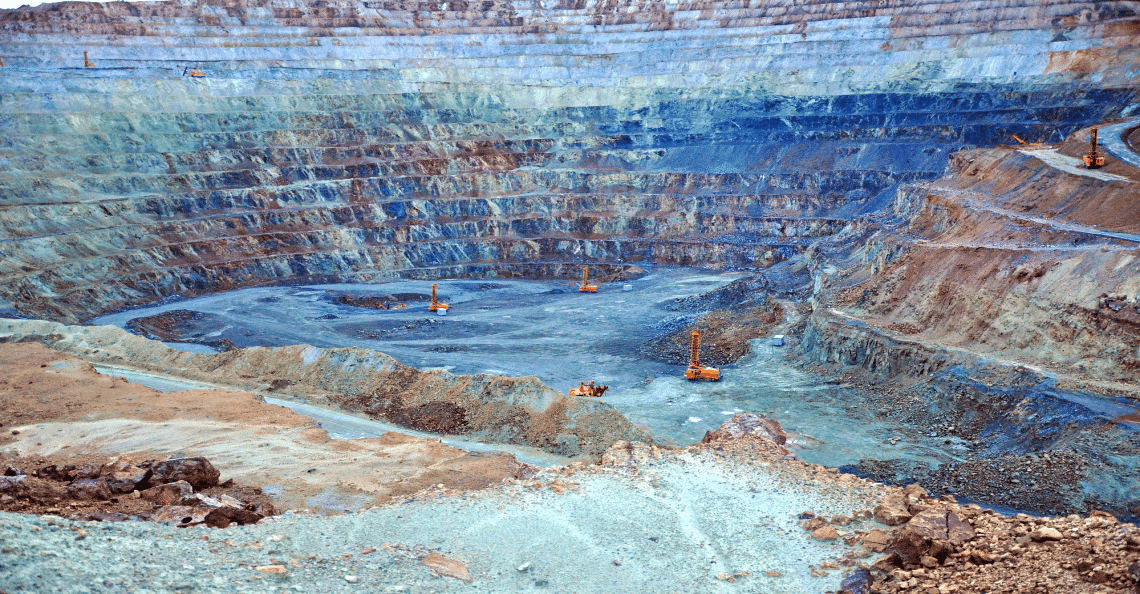 The greatest threat to wealth preservation facing all citizens and investors right now is inflation. A hedge to that threat, a sort of insurance policy if you will, has been found throughout history in gold. In 2018, massive deficit spending is the norm with western governments losing all sense of sound money and trust. Therefore the need to protect one’s purchasing power against reckless government spending and inflation is rising.

In recent weeks, we have warned against deficit spending in the U.S., which included a record quarterly deficit total of $488 billion from January through March. Despite a record federal budget surplus for April, which saw government revenue jump 12% year over year, the deficit widened dramatically in the first half of 2018. Trump will need sustained growth of well over 3% GDP to offset his spending plans.

We are not betting against President Trump’s economic policies, but it is difficult to talk away 1 trillion dollar deficits projected by 2020. Moreover, even if the U.S. economy can find a way to sustainably grow around 3%, mediocre global growth is coming at the expense of deficit spending in Canada, the E.U. and most other major economies. Sadly, deficit spending is a way of life for most G20 countries… 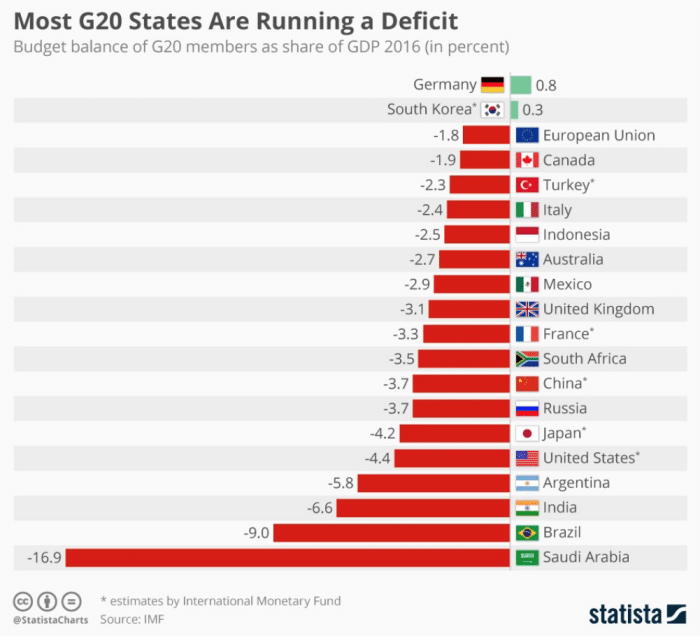 One day after the U.S. withdrew from its international nuclear deal with Iran, Israel’s military carried out strikes against Iranian targets in Syria. Coincidence? We think not. The U.S. and Israel are more aligned than ever with Donald Trump and Bibi Netanyahu in office. Jerusalem Mayor Nir Barkat announced intentions to formally name a square near the newly located US embassy:”United States Square in honor of President Donald Trump.”

The Korean Peninsula appears poised for an unprecedented period of peace, thanks to, at least in part, President Trump. Trump is set to meet Kim Jong Un on June 12th in Singapore. The Middle East, on the other hand, will likely get worse before it gets better. Israel’s current leadership has been emboldened by a supportive United States (particularly since John Bolton became National Security Advisor to the President) as Trump looks to bend Tehran to his will. Bloomberg published an article on Thursday titled Trump Is Now Free to Fight for Iranian Freedom. The subtitle read:

“The most urgent task after the nuclear deal is increasing the odds of success for the democratic uprising.”

A series of protests have erupted since late-2017 by some of the people of Iran designed to overthrow the existing government and remove Ali Khamenei. The Iranian government has stated these protests were staged, while many in Trump’s inner circle have publicly called for a regime change…

Trump is already stoking Iran’s political flames, encouraging Iranians to rise up and take their freedom. At the same time, he is preparing to make their lives worse through increasingly brutal sanctions. Iran is short on friends, while Trump and the booming U.S. economy carry out their agenda without a second thought.

Why We Like Gold in 2018 (Hint: Deficit Spending, Falling Production)

If the Iranians are put into a corner, the possibility of conflict could spur a move in gold prices. Gold’s price action over the past few years, combined with the normalization of massive deficit spending in the United States, makes us believe it is due for a rally…

In such a scenario, as we’ve seen over the last decade, equity-based gold ETFs will outperform commodity-based gold ETFs every time. The reason for this is simple: gold miners and explorers have leverage to the price of gold. Instead of an ounce rising in value ($1,300 to $1,600 equals $300 gain) and realizing a gain based on that, miners have exposure to hundreds of thousands or even millions of ounces. So, historically speaking, leveraged investments, including junior and senior gold miners, outperform gold during a bull market…

With our focus on small-caps, and a growing rolodex garnered from over a decade in the space, juniors gold miners are where we intend to utilize our investment dollars.

There is a growing threat to gold mining supply that almost no one is talking about.

We warned about the concept of ‘Peak Gold’ as early as May of 2015 in Peak Gold in 2015? The article centered on a Goldcorp (world’s 5th largest gold producer in 2017 with 2.57 million ounces produced) presentation that showed correlation between declining gold discoveries and overall production.

Below is the graph highlighting the decline in discoveries from Goldcorp several years back: 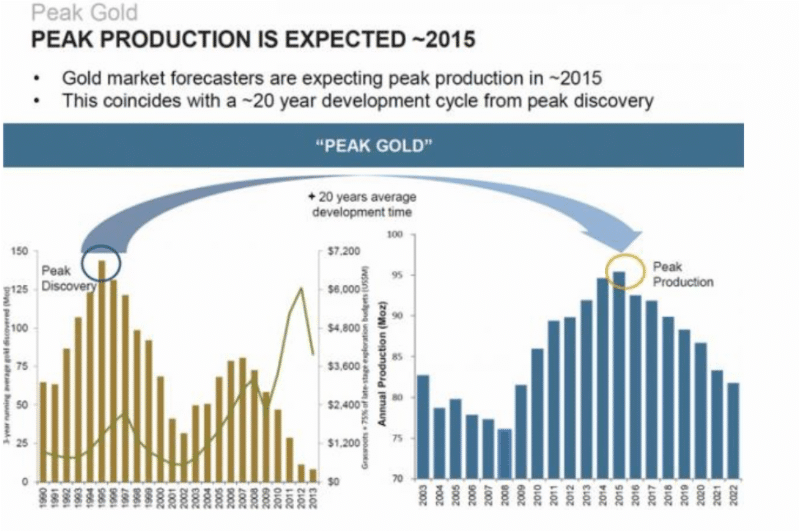 According to Mining.com, Goldcorp’s production fell by 10.5% in 2017. What’s more, the top five gold producers are all predicting significant annual production declines from 2017 to 2018.

China’s gold production has also been sliding lower as well. Bear in mind, China is the world’s largest (by country) producer and consumer of the precious metal. According to the Market Oracle,

A 9% decline for the world’s largest producing nation is massive; and few investors are even aware of this! As most of our readers know, China does not export an ounce of gold…

A Gold Telegraph article from March of this year highlights the declining exploration success:

“China might import gold to meet its own demand. But the available supply of gold is finite. During the past 15 years, global gold deposits have become depleted, and replacement deposits are becoming rarer each year.” 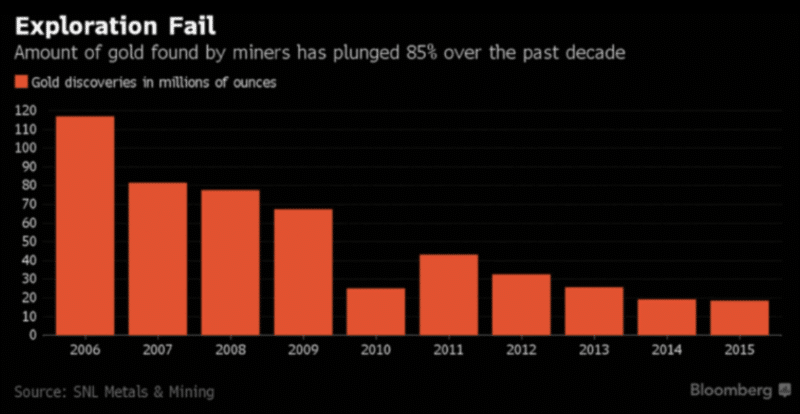 From that same article,

“China is not the only country producing less gold. South African and Australian gold deposits are showing signs of becoming depleted. The cost of exploring for new gold has become cost prohibitive and viable deposits are becoming more difficult to reach.”

For the patient investor, a catalyst is emerging that could send gold prices, and miners, significantly higher.

The underlying issue behind decreasing production are low gold prices, which have failed to incentivize exploration. We are nearing a breaking point when, during the next money printing binge or deficit spending to infinity showdown, investors are going to want gold. When the world realizes we are finding less of it, and producing a lot less to boot, prices are going to surge. It is unlikely this breakout will happen tomorrow, but we would rather be early than a week late. Gold can move $50 to $100 in a day and junior miners can gap up 50-100% in a matter of days. We have seen it before, and we will see it again. The stage is being set.